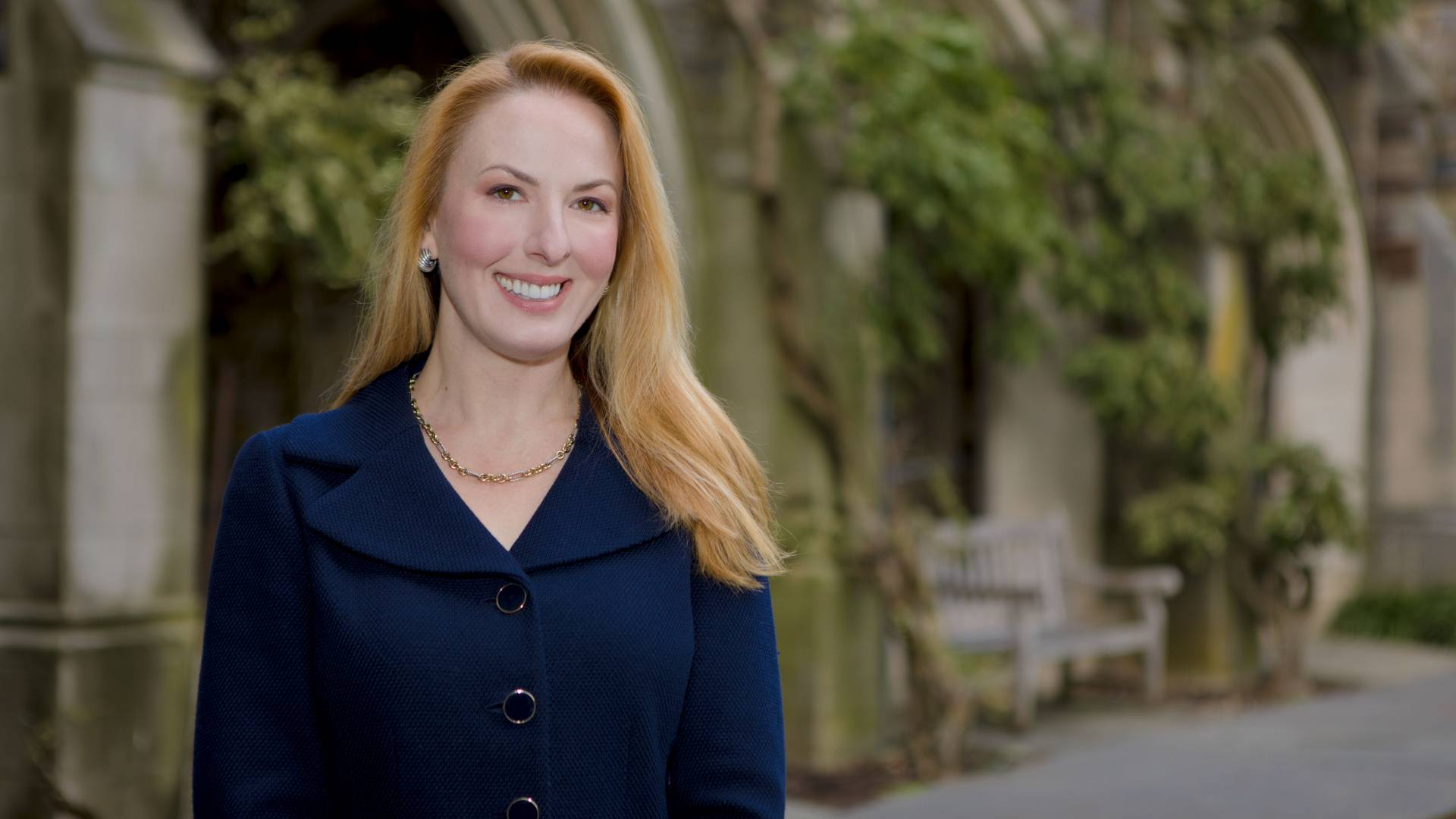 The stereotype that women lack natural "brilliance" could explain their underrepresentation in academia, according to new research based at Princeton University.

The researchers surveyed 1,820 faculty, postdoctoral fellows and graduate students, men and women, from 30 disciplines at high-profile public and private research universities nationwide. The study, "Expectations of brilliance underlie gender distributions across academic disciplines," will be published Jan. 16 in the journal Science.

Researchers measured academics' belief that success in their own disciplines depended on raw brilliance. The researchers concluded that what they call "field-specific ability beliefs" ultimately put women at a disadvantage because of stereotypes that they lack innate intellectual talent, said Sarah-Jane Leslie, the study's lead author and the Class of 1943 Professor of Philosophy at Princeton. This emphasis on brilliance exists almost as a secret password that precludes the value of other traits, such as hard work, passion, dedication or diligence. In this video, Leslie discusses the study.

According to Leslie, the more a discipline emphasized the importance of raw brilliance rather than hard work and dedication, the lower the number of women earning doctorates in that discipline. For example, molecular biology viewed hard work as a very important component of success, and women earned approximately 50 percent of all Ph.D.s in that field in 2011. In contrast, physics saw raw brilliance as much more important, and women earned fewer than 20 percent of Ph.D.s in 2011. "Statistically speaking, we found a highly significant correlation between 'brilliance required' outlooks and women's representation across the totality of 30 disciplines," said Leslie.

One possible explanation could have been that women really were less likely than men to have the raw brilliance that some disciplines require, and so might have been less well represented in those highly selective disciplines, according to Leslie. However, the researchers found no relationship between gender representation and how hard it is to get into graduate school in the field. "The issue doesn't lie with women's aptitude, but rather with the 'brilliance required' attitude," Leslie said. 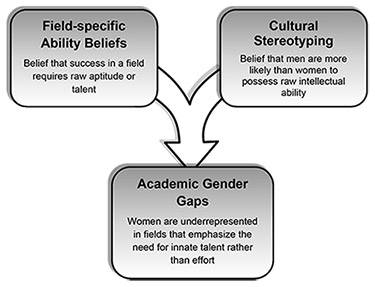 To examine gender gaps in academia, researchers at Princeton University and the University of Illinois at Urbana-Champaign created a model to examine how field-specific ability beliefs — that is, beliefs about the extent to which success in a given academic field requires raw brilliance — combine with pervasive cultural stereotypes that associate this sort of brilliance with men, not women. (Image courtesy of Andrei Cimpian, University of Illinois at Urbana-Champaign, and Sarah-Jane Leslie, Princeton University)

Much public discourse has been focused on women's underrepresentation in STEM fields — natural science, technology, engineering and math, said Leslie. "We wanted to expand the domain beyond STEM," she said. "These 'brilliance required' messages actually predict women's participation across the entire academic spectrum, including social sciences and the humanities."

Leslie worked with co-lead author psychology professor Andrei Cimpian of the University of Illinois at Urbana-Champaign; Meredith Meyer, an assistant professor of psychology at Otterbein University; and Edward Freeland, associate director of the Survey Research Center in Princeton's Woodrow Wilson School of Public and International Affairs.

Leslie said the idea for the study grew out of a conversation she had with Cimpian at a 2011 conference of the Society for Philosophy and Psychology.

"We were talking about these different ways of thinking about what's required for success and later the topic of women's representation in philosophy came up," Leslie said. "Philosophers tend to emphasize the need for raw brilliance much more than psychologists do. We had that contrast between these two disciplines, and we wondered if that might not extend more broadly to others."

Leslie noted that in her own field of philosophy in the 1980s, philosophers would sometimes speak of "the beam" — the idea that some lucky individuals were born with a metaphorical beam of light coming from their foreheads, which they could shine on any subject matter they chose, thereby illuminating it without prior study.

"This was the gold standard for being a successful philosopher — which is clearly a strong 'brilliance required' message," Leslie said. "It's not surprising, then, that women are as underrepresented in philosophy as they are in many STEM fields."

"The fact is that any of us who are successful in our fields only got there through incredible amounts of hard work and dedication," Leslie said. "We should let our students know this and not let anyone think we just 'shine our beams' and that is that." 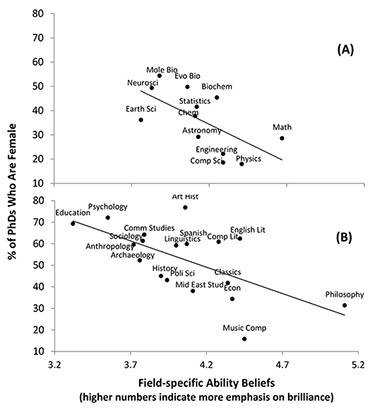 This chart illustrates the relationship between the "brilliance required" messages some academic disciplines send out and the percentage of Ph.D.s earned by women in those fields: (A) natural science, technology, engineering and math (STEM) disciplines, and (B) social science and humanities disciplines. (Image courtesy of Andrei Cimpian University of Illinois at Urbana-Champaign, and Sarah-Jane Leslie Princeton University)

According to Leslie, the study has important implications for the dialogue on diversity that is taking place at colleges and universities across the country. "The study's findings suggest that academics who wish to address the gender gap in their fields should pay particular attention to the messages they send concerning what's required for success," Leslie said. "For example, they can downplay talk of innate intellectual giftedness and instead highlight the importance of sustained effort for top-level success in their field."

Cimpian said what professors tell their students can have meaningful influence. "What our data suggest is that conveying to your students a belief that brilliance is required for success may have a differential effect on males and females who are looking to pursue careers in your field," he said.

Carol Dweck, a psychology professor at Stanford University, said that the most important element of these findings is the clear call to action. Dweck is familiar with the research but had no role in it.

"If academic disciplines want to increase the representation of women, they need to change their message," Dweck said. "They need to place greater emphasis on the role of dedication and growth over time, and less emphasis on innate genius."

Dweck noted the study also is significant because "this is the first time researchers have identified the 'mindsets' of academic disciplines," and shown "that a field's mindset is important above and beyond other popular explanations for women's underrepresentation."

"The work addresses why the mindsets are linked to representation: fields that emphasize brilliance rate women as less suitable for high-level work in their field and they rate their fields as less welcoming to women," Dweck said.