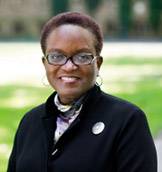 Valerie Smith, Princeton University's dean of the college, has been named the next president of Swarthmore College. Swarthmore's Board of Managers approved her appointment Feb. 21.

Smith, who is also the Woodrow Wilson Professor of Literature and a professor of English and African American studies, will remain at Princeton through June 30, the end of the academic year. On July 1, she will assume office at Swarthmore, a top-ranked liberal arts college near Philadelphia.

"As Princeton's dean of the college, Val Smith has demonstrated a heartfelt appreciation for the values that define a liberal arts education," Princeton President Christopher L. Eisgruber said. "Val fits perfectly with the mission and ethos of Swarthmore College, and, while we will miss her at Princeton, we are thrilled to see her take the helm of such a great institution."

A specialist in African American literature and culture, Smith has been a member of the Princeton faculty for 23 years. She has been dean of the college since July 2011 and served as founding director of Princeton's interdisciplinary Center for African American Studies from 2006 to 2009.

"Val is a brilliant scholar and a superb teacher, and she cares deeply about student well-being and diversity," Eisgruber said. "She has also been a distinguished leader for an administrative team that is talented, collegial and effective."

As the senior officer responsible for Princeton's undergraduate curriculum, residential college system, and admission and financial aid offices, Smith has overseen a number of initiatives to enhance the student academic experience, increase the diversity of undergraduates and provide greater campus support to help students thrive.

"During my many years at Princeton as a faculty member and then as dean, I have been fortunate to have been able to forge close ties and work with exceptionally talented and dedicated students, faculty and administrative colleagues, and members of staff," Smith said. "I am thrilled to embrace my new role at Swarthmore, and I am certain that the lessons I have learned here will inform my work there. "

Smith's work as dean of the college has included:

During Smith's tenure as dean, the faculty approved changes to eliminate numerical targets from the University's grading policy.

Eisgruber will appoint a search committee for the next dean of the college, to be chaired by Dean of the Faculty Deborah Prentice.

Smith was on the Princeton faculty from 1980 to 1989, and returned to the University in 2001 after 11 years at the University of California, Los Angeles. In 2002, she was appointed as director of Princeton's then-Program in African American Studies and oversaw its expansion into an academic center. She increased the Center for African American Studies' number of core faculty, created a postdoctoral fellows program and established a distinguished visiting scholars program.

In 2009, Smith received the President's Award for Distinguished Teaching, which recognizes excellence in undergraduate and graduate teaching by faculty members.

"My relationships and experiences at Princeton have enriched my life in ways that are truly incalculable, and I am very grateful to the University for the many opportunities I've received here," Smith said.

Smith's research and teaching interests include African American literature and culture, black feminist theory, autobiography, black film, and 20th and 21st-century U.S. literature. She is the author of "Toni Morrison: Writing the Moral Imagination," "Not Just Race, Not Just Gender: Black Feminist Readings," and "Self-Discovery and Authority in Afro-American Narrative."

Smith holds a master's degree and Ph.D. from the University of Virginia. She is a Phi Beta Kappa graduate of Bates College, where she currently serves as a trustee.