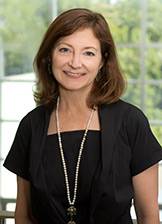 Deborah Prentice, Princeton's Alexander Stewart 1886 Professor of Psychology and Public Affairs and chair of the Department of Psychology, will become dean of the faculty on July 1.

"Debbie Prentice is one of this University's best and most accomplished department chairs. She is a proven leader, and I am thrilled that she has agreed to become Princeton's next dean of the faculty," Princeton President Christopher L. Eisgruber said in announcing the appointment Wednesday, June 4.

Prentice, who has chaired the psychology department since 2002, will succeed David Dobkin, who has been dean since 2003. He announced in February that he was stepping down at the end of the academic year. The Phillip Y. Goldman '86 Professor in Computer Science, Dobkin will return to teaching and research.

Eisgruber said Prentice "has guided the Department of Psychology brilliantly at a critical juncture in its history, strengthening it into the country's top-ranked department, diversifying its faculty, transitioning it to a new building and helping to launch the Princeton Neuroscience Institute. She is also a spectacular teacher and a wonderful University citizen with a wide-ranging knowledge of Princeton's faculty — indeed, professors from every division of the University sent enthusiastic messages nominating her for the deanship."

He added: "Debbie possesses a unique combination of humane judgment, strategic insight and administrative skill. I am confident that she will be a superb dean of the faculty."

"Princeton has an extraordinary faculty, and I consider it an honor and a privilege to be their dean," said Prentice, a recipient of the University's President's Award for Distinguished Teaching.

The dean of the faculty has administrative oversight of the departments and programs of instruction and is responsible for matters pertaining to the effectiveness and well-being of the faculty and the professional research, specialist and library staffs.

The dean is a member of the president's cabinet and the academic planning group, works with the president and provost on academic initiatives, and serves as secretary to the Trustees' Academic Affairs Committee. The dean also serves as secretary of the Faculty Advisory Committee on Appointments and Advancements and the Faculty Advisory Committee on Policy, and is an ex officio member of numerous other committees.

Prentice's University service includes serving as co-chair of the Trustee Ad Hoc Committee on Diversity from January 2012 to September 2013. The committee's report and recommendations, which outlined a comprehensive strategy to increase the inclusivity of the University community, were unanimously endorsed by Eisgruber and the Board of Trustees.

Prentice is a member and former chair of the resources committee of the Council of the Princeton University Community; faculty associate in the University Center for Human Values and in the Program in Gender and Sexuality Studies; faculty fellow in the McGraw Center for Teaching and Learning and in Whitman College; and faculty council member in the Woodrow Wilson School of Public and International Affairs.

As dean, Prentice said, she will draw on these varied experiences.

"As a department chair, I have had a great deal of experience recruiting, developing, supporting and retaining the faculty of my department. That experience has given me valuable insight into what faculty members want and need in order to flourish at different stages of their careers and also insight into the challenges that departments face in their efforts to bring the most talented scholars and teachers to campus and keep them here," she said.

"I have also had a lot of experience working closely and collaboratively with colleagues in other departments and in developing interdisciplinary initiatives. Finally, as co-chair of the Trustee Ad Hoc Committee on Diversity, I learned a great deal about why diversity is critical to Princeton's mission and about the opportunities and challenges involved in diversifying Princeton's faculty."

Prentice is a social psychologist and a member of the behavioral policy group in the Wilson School. In her research, Prentice studies social norms, the unwritten rules and conventions that govern social behavior, and she is particularly interested in how social norms can be used in programs designed to change behavior. Some specific topics she has studied include norms involving intimate partner violence, college attrition, student athletes, human rights, acting independently and gender. She regularly teaches a course called "The Psychology of Social Influence," which is cross-listed in the psychology department and the Wilson School.