A commitment to help fund the hiring of new faculty members to increase faculty diversity is one of many initiatives Princeton University has undertaken in response to the 2013 Report of the Trustee Ad Hoc Committee on Diversity.

The report — which was unanimously endorsed by the Board of Trustees and President Christopher L. Eisgruber — recommended a comprehensive strategy to increase the diversity and inclusivity of the Princeton faculty, graduate student, postdoctoral and staff populations. Initiatives focused on each group are being planned or are underway.

"Since the report was released in fall 2013, we have been in a phase of design and experimentation," Provost David S. Lee said. "This has involved a number of pilot programs, staff investments and planning activities in the Graduate School, Office of the Dean of the Faculty, and Office of Human Resources. I am pleased with what we have been able to accomplish over the last 18 months, and we expect to extend these efforts in the coming years."

Lee, whose office coordinates and approves funding for many of the initiatives, will continue to monitor the University's progress. 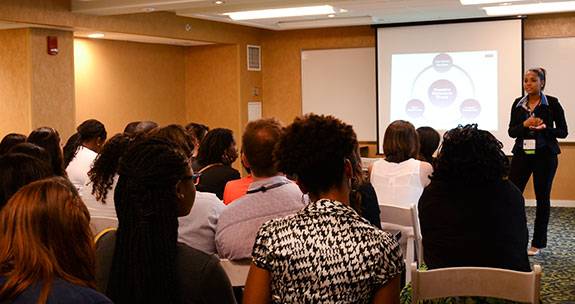 A student participating in the Princeton Summer Undergraduate Research Experience (PSURE), coordinated by the Graduate School, gives a presentation about her research in psychology. (Photo by Jennifer Loessy, Graduate School)

Dean of the Faculty Deborah Prentice, whose appointment as dean began July 1, has expanded the Faculty Advisory Committee on Diversity to 10 members from four, and the committee is pursuing a number of efforts.

In November, Prentice informed department chairs that her office would contribute funding equivalent to 10 full-time faculty members for new hires that diversify the faculty, with diversity understood broadly. As departments typically share in funding the new positions, 15 to 20 new hires could result from this initiative.

"The Report of the Trustee Ad Hoc Committee on Diversity highlighted the need to do better, push harder, to recruit and retain faculty members who diversify the campus community," said Prentice, who co-chaired the ad hoc committee with Trustee Brent Henry. "The impetus for these hires still comes from the faculty, from academic departments, centers and institutes. The commitment of funding is intended to embolden and support these units in their efforts to diversify."

One of the report's key recommendations was that within three years, each academic department should create a multiyear strategic diversity plan to address its goals and challenges in diversifying at all levels from undergraduates to tenured professors. That planning has been folded into a broader departmental planning process that parallels the University-wide strategic planning process that Eisgruber initiated in 2014. Each department is developing a comprehensive strategic plan, with five- and 10-year outlooks. The plans must include a consideration of the opportunities and hiring directions the department will have, and how they plan to increase diversity within the department. Draft plans are due this spring, and final plans are due at the end of the academic year, she said.

The Faculty Advisory Committee on Diversity is also looking at two speaker series related to diversity. One would bring speakers to campus to discuss the subject of diversity, such as the value of diversity and challenges in pursuing it. The other program would be a "new directions" workshop series that would bring in individuals who are about to enter the assistant professor job market, exposing faculty members to new academic directions in scholarship, and as a byproduct, introducing faculty members to a more diverse array of potential job candidates than have come to campus in the past.

In addition, the committee is examining ways to expand and diversify the postdoctoral program, with a proposal to come later this year.

The graduate student population was another major focus of the diversity report. Since his appointment in March 2014, Dean of the Graduate School Sanjeev Kulkarni has worked with the provost's office and academic departments to help fund several pilot programs: expanded fee waivers for select applicants, a standardized test search service for departments, and recruiting and mentoring efforts in a number of departments.

"I have been heartened by the meaningful efforts of many colleagues in identifying and recruiting a more diverse graduate student body," Kulkarni said. "As a result of our collective efforts, we have seen a sizable increase in the number of underrepresented minority applicants in the current admission cycle. At the same time, there is more we can do to create an inclusive campus culture where all students feel intellectually validated, supported and engaged."

While admission statistics will not be final until the close of the admission season this spring, the Graduate School has seen an increase of approximately 13 percent from U.S. minority applicants, a group that includes those who identify as black/African-American, Latino/Hispanic, American Indian/Alaska Native and/or Native Hawaiian/other Pacific Islander.

This fall, the University began offering two tools to academic departments for use during the admission process. By expanding application fee waivers, applicants now may receive waivers based on financial hardship, participation in a number of partner programs, a faculty member or department's request, or interactions with Graduate School staff at diversity recruiting fairs and conferences.

The Graduate School also has provided departments with access to an online database of students who have taken the GRE, or General Record Examination standardized test, within the last 18 months and have opted in to be included. The database includes both academic and demographic information. It can be used by departments to encourage applications from candidates who might not have otherwise considered applying to Princeton. 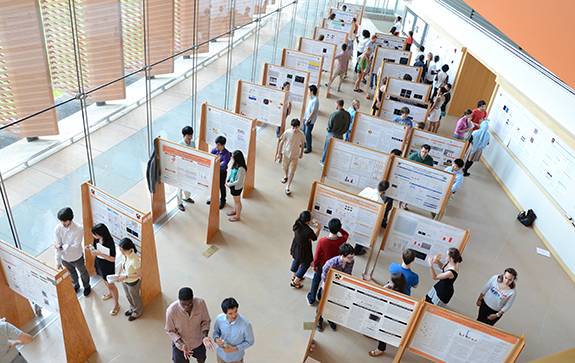 Through the Summer Undergraduate Research Program in Molecular and Quantitative and Computational Biology, undergraduates selected from a nationwide pool get intensive laboratory research experiences and participate in other activities, such as the poster session shown above. (Photo by Meredith Wright, Class of 2013)

The departmental pilot programs experiment with models for recruiting a more diverse graduate student body, with methods such as increasing the pipeline of students with research experience and exposure to Princeton or creating programs that make graduate study at Princeton more inclusive. Several of the programs follow the model of the Princeton Summer Undergraduate Research Experience (PSURE), the Graduate School's eight-week program for students who have expressed serious interest in pursuing a Ph.D., drawing from a consortium of 32 universities.

The pilot programs include the following:

Over the last 18 months, the Office of Human Resources and administrative units also have been working to improve the diversity and inclusiveness of the staff through diversity planning and re-examining recruiting and training efforts.

"The campus community is experiencing an important time in which there is a widespread, shared focus on diversity and inclusion," said Vice President for Human Resources Lianne Sullivan-Crowley. "We are motivated by the momentum and excited by the work. We have administrative units that have completed comprehensive diversity plans that include recruiting, training, professional development, general climate and leadership, and we are looking forward to even more progress in the months ahead."

Just as academic departments were encouraged to develop diversity plans, the diversity report recommended that each administrative unit create a diversity strategic plan.

University Services, through its Diversity Working Group, has completed its strategic diversity plan and is putting it into action. One of the plan's key elements is an ambassador program in which staff members educate, promote and participate in programs related to diversity and inclusion, both within their units and with an assigned group outside of their unit. The ambassadors are currently receiving their training.

Human Resources also engaged a consulting firm to examine the University's recruiting practices. The firm found that departments across the University would like more proactive services to support diversity recruitment, so Human Resources will add two new staffing specialists and a sourcing specialist, and will evaluate staff roles and methods to provide additional support for increasing the diversity of candidate pools.

Human Resources is continuing its diversity and inclusion training classes, such as "Leveraging Diversity: Challenges and Opportunities" and the Ally Project's "Supporting Students, Staff and Faculty" and "Transgender 101." In 2014 Human Resources launched a new training program focused on unconscious bias and micro-inequities. In addition, the provost's office has awarded funding for additional training that will be introduced later this year.