Dean of the Faculty Deborah Prentice will take office as Princeton University's provost on July 1, succeeding Provost David Lee. Lee has decided to return to full-time teaching and research after serving since 2013 as the University's second-ranking officer. The provost is the University's chief academic officer and its chief budget officer, with special responsibility for long-range planning.

"I am deeply grateful for Dave's willingness to take on the role of provost as I began my presidency," said President Christopher L. Eisgruber. "I appreciate and respect his desire to pursue once again the scholarly passions that brought him to Princeton first as a student and then again as a faculty member. I am especially delighted that he now plans to apply his scholarly expertise and administrative experience to direct a new project on higher education metrics and outcomes. The project meets an important strategic need of the University, and Dave is uniquely qualified to lead it.

"I am exceedingly pleased that Debbie Prentice has accepted my invitation to succeed Dave as Princeton's next provost," Eisgruber added. "She has been a superb dean of the faculty, and in that capacity has been integrally involved in all of our strategic and campus planning efforts as well as in the University's academic and budgetary planning for which she now will have principal responsibility. She is knowledgeable, thoughtful, insightful, compassionate, and wise, and she has a deep appreciation for every aspect of this University's mission and work. I look forward to working with her as we carry out the priorities we have identified in our various planning initiatives." 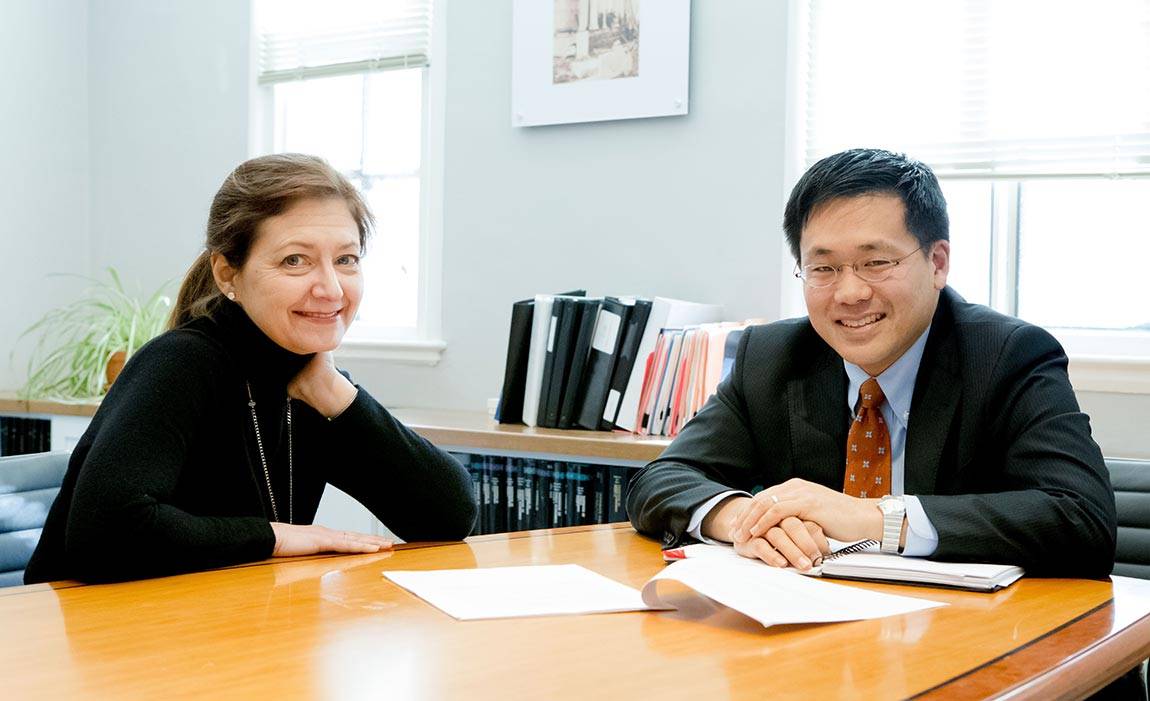 Dean of the Faculty Deborah Prentice and Provost David Lee pose for a photo in January 2016. Princeton President Christopher L. Eisgruber has announced that Lee will step down as provost and return to full-time teaching and research. Prentice will succeed him as provost effective July 1. (Photo by Denise Applewhite, Office of Communications)

Prentice, Princeton's Alexander Stewart 1886 Professor of Psychology and Public Affairs, was named dean of the faculty in 2014 after serving for 12 years as the chair of the Department of Psychology. A social psychologist who studies social norms, she began teaching at Princeton in 1988 while completing her Ph.D. in psychology from Yale University, following undergraduate work at Stanford University. She became an assistant professor in 1989, associate professor in 1995 and full professor in 2000.

"I am honored and excited to become Princeton's provost, especially at this critical juncture," Prentice said. "The strategic planning and campus planning processes have given us a compelling vision of how we can build on the extraordinary strengths of this University in the years ahead, and I am eager to work with the entire university community to make this vision a reality.

"That said, I will miss being the dean of the faculty," Prentice added. "I have learned a tremendous amount in my three years as dean and have enjoyed getting to know so many wonderful colleagues. The faculty inspire me every day, and I look forward to continuing to work with them in my new role."

Lee is a professor of economics and public affairs. Between 2009 and 2013 he served as director of the Industrial Relations Section at the University, an academic unit that promotes research and training in labor economics. After earning his bachelor's degree from Harvard University and a Ph.D. in economics from Princeton, he taught at several other universities before joining the Princeton faculty in 2007. His research interests are primarily in the areas of labor economics and econometrics.

As provost, Lee drew upon this expertise to expand the use of data and analytics in budgetary planning and enhanced processes that enable multi-year planning. He chaired the CPUC's Special Task Force on Diversity, Equity and Inclusion. In response to one of the recommendations of that task force he established a Provost's Fund for Cultural Studies, and this past fall he created a Princeton Histories Fund to support the exploration of "aspects of Princeton's history that have been forgotten, overlooked, subordinated, or suppressed." He also played a leading role in establishing the Princeton Entrepreneurship Advisory Committee and then creating the Princeton Entrepreneurship Council.

"It has been a tremendous honor and privilege to serve as provost alongside such dedicated colleagues, and to witness firsthand the commitment and loyalty to Princeton that runs deep among our faculty, students, staff, senior leadership, alumni and trustees," Lee said. "I am truly blessed to have experienced Princeton as a graduate student, faculty member, and now as provost. I return to my academic life inspired by how tirelessly my colleagues work to find ways to make Princeton an even better place for learning and discovery. I look forward to seeing the University community flourish under the exceptionally superb leadership of Chris and Debbie."

In returning to his scholarly interests, beginning next year Lee will serve as director of a new "strategic evaluation and data initiative" at Princeton that will seek to develop better mechanisms for enabling and enhancing data-based decision-making at Princeton and throughout higher education, and to facilitate scholarly analyses on the impact and productivity of higher education.

"In the development of the University's strategic planning framework, our trustees emphasized the importance of developing ways to evaluate our success in achieving our mission and to assess our long-term impact on our alumni and the world," Lee said. "I am excited by this opportunity to encourage high-quality scholarship and analysis on questions of strategic interest, which I hope will improve decision-making and generate knowledge about the societal impact of our sector of higher education."

When Prentice takes office this summer she will be the third person to serve as provost after serving previously as dean of the faculty. The others were Princeton's first provost, J. Douglas Brown, and current University of Pennsylvania president Amy Gutmann.

Eisgruber plans to convene a faculty search committee this spring to assist in identifying a successor to Prentice as dean of the faculty.

Provost Deborah Prentice nominated to lead the University of Cambridge