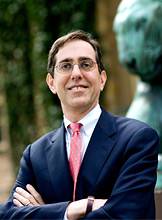 Christopher L. Eisgruber, Princeton's provost for the past nine years, has been named the University's 20th president, effective July 1. He succeeds Shirley M. Tilghman, who last fall announced her intention to step down at the end of this academic year after completing 12 years in office.

Eisgruber was appointed at a special meeting of the University's Board of Trustees on the unanimous and enthusiastic recommendation of a 17-member search committee following a six-month search. The search committee included nine trustees, four faculty members, three students, and a member of the staff; it was chaired by Kathryn Hall, the chair of the board.

A member of the Princeton undergraduate Class of 1983, Eisgruber majored in physics, spent two years at Oxford as a Rhodes Scholar, and then received his law degree from the University of Chicago. After clerking for U.S. Court of Appeals Judge Patrick Higginbotham and U.S. Supreme Court Justice John Paul Stevens and teaching at New York University Law School for 11 years, he joined the Princeton faculty in 2001 as the director of the Program in Law and Public Affairs and the Laurance S. Rockefeller Professor of Public Affairs in the Woodrow Wilson School of Public and International Affairs and the University Center for Human Values. He was named Princeton's 11th provost in 2004 and in that capacity has been the University's second-ranking official and its chief academic and budgetary officer.

"Chris Eisgruber has all of the qualities we were looking for in Princeton's next president," said Hall. "He has keen intelligence and excellent judgment; he cares passionately about teaching and research of the highest quality; he is deeply committed to principles of excellence, equity and integrity; and he is devoted to Princeton.

"He has played a central role in many of the key initiatives of recent years, some of which he now will be responsible for bringing to fruition," Hall said. "He is well prepared to provide strong leadership as Princeton makes important decisions in areas ranging from online learning to globalization to increasing the diversity of our campus community, as well as in addressing challenges and pursuing opportunities that we cannot foresee. As valuable as this preparation is, the principal reason we selected Chris was because of the personal qualities that make us confident that he will lead Princeton with vision, imagination, courage and conviction.

"In the course of our search we heard from observers throughout the country that Chris is already recognized as a leading voice within the higher education community, and we will look to him to play a leadership role on the national and international level on topics ranging from education in the liberal arts and support for basic research to academic integrity and college access and affordability," Hall added. "Princeton has been blessed with an extraordinary group of recent presidents, and we look to Chris both to build on their legacy and to make his own distinctive contributions."

Tilghman said: "I strongly endorse the judgment of the search committee that there is no one better qualified than Chris Eisgruber to serve as Princeton's 20th president. For nine years I have had an opportunity to witness first-hand the breadth and depth of his understanding of this university and his deep commitment to its core values. I have been impressed by his ability to frame issues in creative and thoughtful ways, to draw on the ideas of others in developing consensus, and to be both compassionate and decisive in carrying out his many responsibilities. In settings both large and small, I have seen his eloquence, his warmth, his integrity, his commitment to excellence, his wide-ranging intellectual curiosity, his sense of humor, and his deep devotion to the well-being of our faculty and our students."

Eisgruber said: "As an undergraduate, faculty member and provost, I have developed a heartfelt appreciation for Princeton's distinctive mission as a great research university with an unmatched commitment to liberal arts education. I feel especially fortunate to succeed Shirley Tilghman, whose wonderful leadership has made this university more vibrant, energetic and inclusive than ever. Yet one of Princeton's most attractive characteristics is its drive not only to sustain past successes but also to build new strengths in response to changing needs and opportunities. I look forward to carrying out the initiatives that are already under way, while also collaborating with the trustees and the wider Princeton community to address the challenges and possibilities that lie ahead."

The search committee that recommended Eisgruber's appointment received more than 320 submissions to a website that it established to encourage comments and suggestions and held open forums and other in-person meetings with undergraduates, graduate students, faculty members, staff members, alumni leaders and members of the local Princeton community. It conducted more than 100 sourcing interviews with members of the campus community and with leaders and thoughtful observers of higher education throughout the country. It held eight in-person meetings and three full-committee conference calls between October and April, and carefully considered a number of both internal and external candidates.

"We were impressed with the broad range of people, both on campus and off campus, who not only spoke very highly of Chris, but told us how fortunate we would be to have him as our president, and who were confident that as our president he would be an exceptionally effective national leader for higher education and research," Hall said. "Again and again, people described him to us as principled, passionate and prepared."

Search committee member Miguel Centeno, chair of the Department of Sociology, said, "From the start we heard that Chris would be a very strong choice, and this was confirmed and supported with compelling evidence month after month, comment after comment, meeting after meeting."

Committee member Gideon Rosen *92, professor of philosophy and chair of the Council of the Humanities, said: "Chris Eisgruber understands, in his bones, the academic and intellectual values of the University, the importance of the liberal arts, and the centrality to our mission of the pursuit of knowledge for its own sake. We were moved by the broad and deep admiration for Chris around the University and around the country. He has a clear conception of the challenges we face and a compelling vision of what it will take for Princeton to adapt to the new century while retaining its distinctive character. He is an eloquent voice for the idea of the liberal arts university, and in particular for the idea of an open, diverse community that integrates teaching, scholarship and the arts at the highest levels. We have great confidence in his leadership, and we look forward to working with him."

Catherine Ettman '13, one of the undergraduate members of the committee, said: "I was very impressed with Chris's commitment to improving the student experience on campus. I found him to be thoughtful and open-minded in thinking about issues that may affect students, ranging from mental health and well-being to career decisions and how to lead meaningful lives."

Chad Maisel, the graduate student representative on the committee, said: "Chris cares deeply about graduate education and recognizes the invaluable role of graduate students and graduate alumni in the Princeton community. Chris impressed us with his deep understanding of the opportunities and challenges facing Princeton and higher education. I couldn't be happier with our selection."

The staff representative to the committee, Deputy Dean of the College Clayton Marsh '85, said: "Chris's knowledge of the inner workings of this university and his keen understanding of the most pressing issues facing higher education — he has taught a freshman seminar on the public mission of universities like Princeton — will be crucial strengths as we enter a period of flux and change in higher education. Princeton will have a tested, wise captain at the helm as we head into choppy waters."

As provost he has been the general deputy to the president and has chaired the Academic Planning Group (which oversees long-range academic planning), the Priorities Committee (which makes recommendations regarding the University's operating budget), and the executive committee of the Council of the Princeton University Community. Before his appointment as provost, he served as a faculty representative on the Alumni Council Executive Committee and taught in the Alumni Studies program, and as provost he has met frequently with alumni groups on campus and around the world.

Eisgruber currently serves as vice chair of the board of trustees of Princeton University Press and chair of its executive committee; a member of the board of trustees of Educational Testing Service; and a member of the academic advisory board of Coursera, an educational technology company providing opportunities for online learning. (Princeton was one of the first universities to offer courses through Coursera.) He also served recently as a member of the American Council on Education Task Force on Institutional Accreditation.

His wife, Lori A. Martin, is a securities litigator with the firm of WilmerHale, and they have a 14-year-old son, Danny, who is a freshman at Princeton High School.

Staff support was provided by Robert Durkee '69, vice president and secretary of the University.