Princeton University’s Board of Trustees on April 9 approved the extension of Christopher L. Eisgruber’s presidency by at least five years, citing a record of accomplishment that has enhanced the University’s global preeminence in teaching and research during a period of transformational gains in student body diversity and philanthropic support, as well as historic campus expansion. 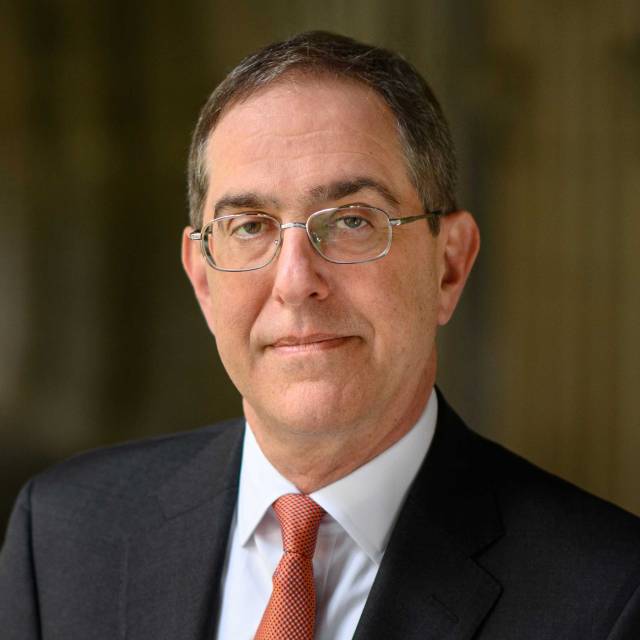 “As the University and world emerge from a period of unprecedented challenges, the board felt it was so important to give us all the reassurance and strength of Chris Eisgruber’s continued leadership for a minimum five more years,” said Louise “Weezie” Sams ’79, chair of the Board of Trustees. “This decision positions us optimally as we venture forward.”

Eisgruber ’83, a constitutional law scholar, became the University’s 20th president in 2013, after serving nine years as provost. “I am grateful to the Trustees for their confidence in me, and I am excited about what we can achieve in the next five years,” said Eisgruber. “It is a privilege to lead this university and this community that I love.”

Among the University’s priorities in the coming years are the successful expansion of the undergraduate student body, far-reaching investments in emerging areas of science and innovation, and the most ambitious campus building program in Princeton history.

“The exceptional performance of the University’s endowment last fiscal year allows us to consider even bolder ways to extend Princeton’s mission and impact,” said Sams. “Chris is a visionary thinker, and we are delighted to keep him at the helm as we lean into this moment of opportunity.”

A decade of achievement

Eisgruber approaches the 10th year of his presidency on a campus that has thrived despite a global pandemic, emerged as a national leader in expanding socioeconomic access to higher education, and is poised for a period of unprecedented growth while preserving the 275-year-old University’s commitment to an intensely residential liberal arts education.

The percentage of Princeton undergraduates eligible for federal Pell Grants for lower-income students has increased to 22% in the Class of 2025, up from 7% for the Class of 2008. Nearly 20% of incoming students these days are first-generation college students. 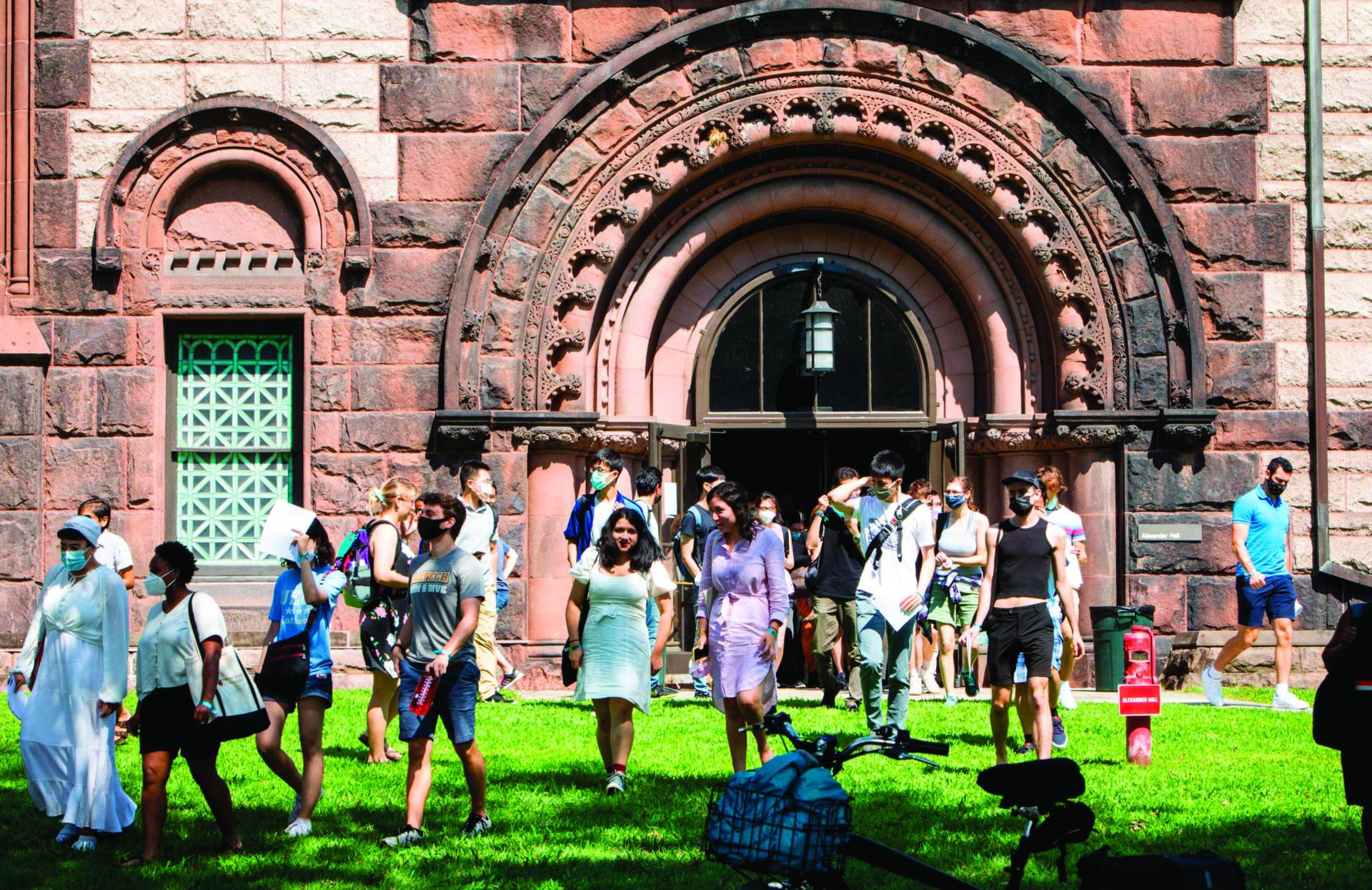 Under Eisgruber’s leadership, the University has seen transformational growth in the diversity of its student body.

Among the initiatives under Eisgruber enabling these gains is a renewal and expansion of the University’s transfer admission program to include more students from first-generation, lower-income, military and community college backgrounds. Last year, the establishment of the Emma Bloomberg Center for Access and Opportunity brought together Princeton’s many initiatives in college access and opportunity. Eisgruber also co-chairs the steering committee of the American Talent Initiative, a nationwide effort to increase the number of low-income students getting college degrees.

More than 60% of Princeton undergraduates receive aid, and the average scholarship for students receiving aid will be approximately $64,000 in the coming year. In January Princeton also announced a 25% average increase in graduate fellowship and stipend rates for the 2022-23 academic year, the largest one-year increase in University history.

Momentum for enhanced access to a Princeton education will continue through two new residential colleges, set to open in fall 2022, that will enable the university to increase the number of undergraduates by about 10%, or 125 students per class year. 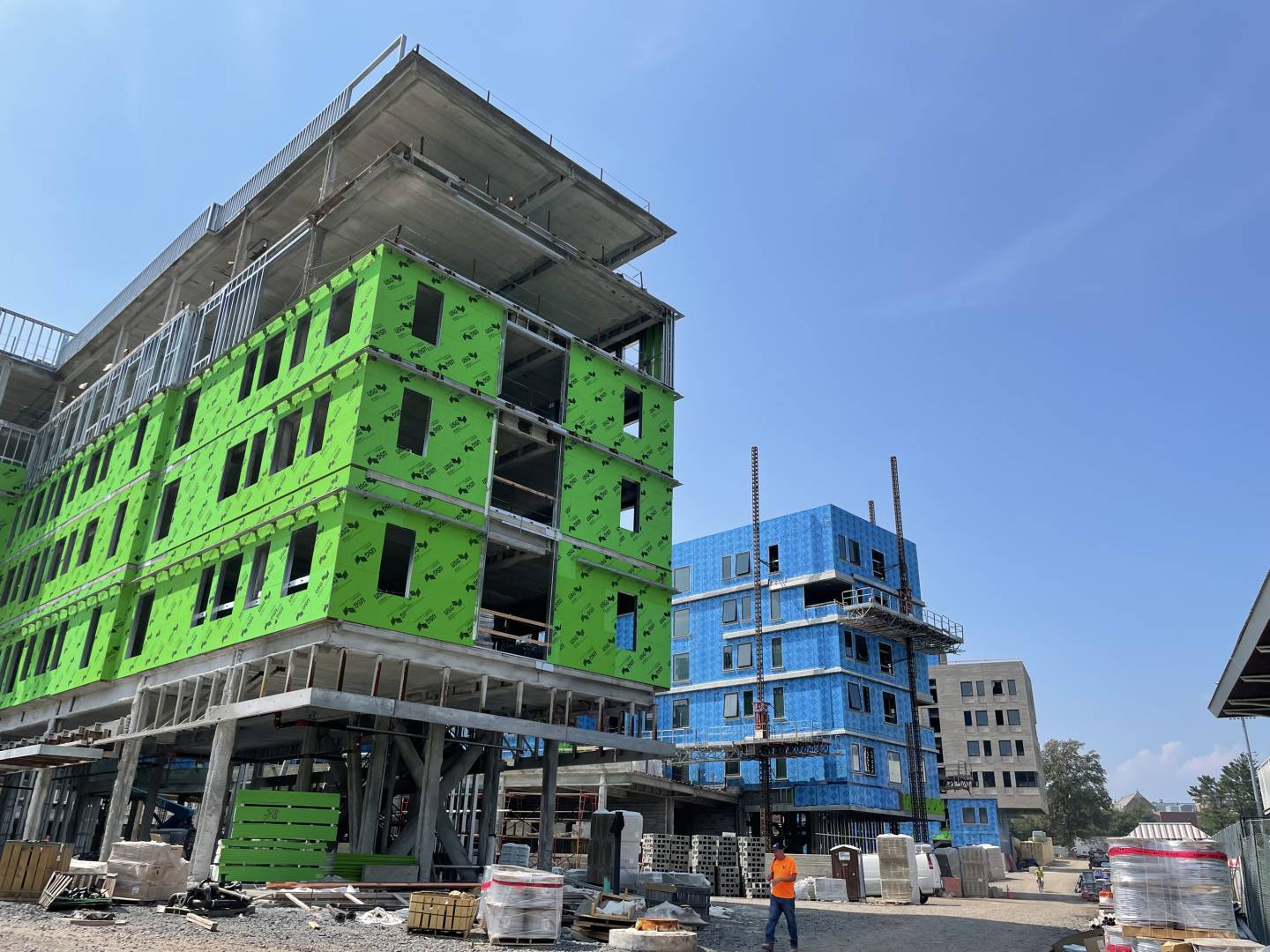 Two new residential colleges, opening in fall 2022, are a critical component of the University’s comprehensive plan to expand the undergraduate student body while preserving Princeton’s commitment to an intensely residential liberal arts education.

“From the moment he became president, Chris wanted to start thinking about increasing the size of the student body, because he understands the impact that a Princeton education can have on students, and on the world once they graduate,” said Sams.

The new residential colleges are part of the most ambitious campus construction plan in the University’s history, initiated by Eisgruber to accommodate expanded research facilities, house more students, and replace aging buildings and infrastructure. In addition to adding some 3 million square feet over the next decade, infrastructure upgrades will also allow the University to achieve its net-zero goals for campus greenhouse gas emissions while serving as a living laboratory for advances in sustainability that can be replicated around the world.

Among the centerpiece building projects underway are a new neighborhood to support teaching and research in engineering and environmental studies, and a Sir David Adjaye-designed art museum at the heart of the campus that will also serve as a convening and teaching space for the arts and humanities.

Across Lake Carnegie, Princeton has begun construction of the Lake Campus Development, which will in its first phase include graduate student housing, varsity athletics and recreational uses. The Lake Campus development is envisioned also as a gateway for more of the innovation and entrepreneurship activities launched by the University in recent years.

Modernization of the campus is made possible by alumni support, and notably through the Venture Forward engagement and fundraising campaign launched by Eisgruber, poised to be the most successful capital campaign in Princeton’s history. The campaign entered its public phase last year and has already announced major gifts including a new home for the computer science department, a major expansion of Princeton’s American Studies program, and ongoing support for the University’s pioneering financial aid program.

Princeton’s physical revitalization is part of an opening-up of Princeton to the region that has also accelerated under Eisgruber’s leadership. During his tenure, the University has strengthened its ties to the municipality of Princeton, including more engagement with the Princeton Council, as well as with the communities of West Windsor, Plainsboro and Trenton. 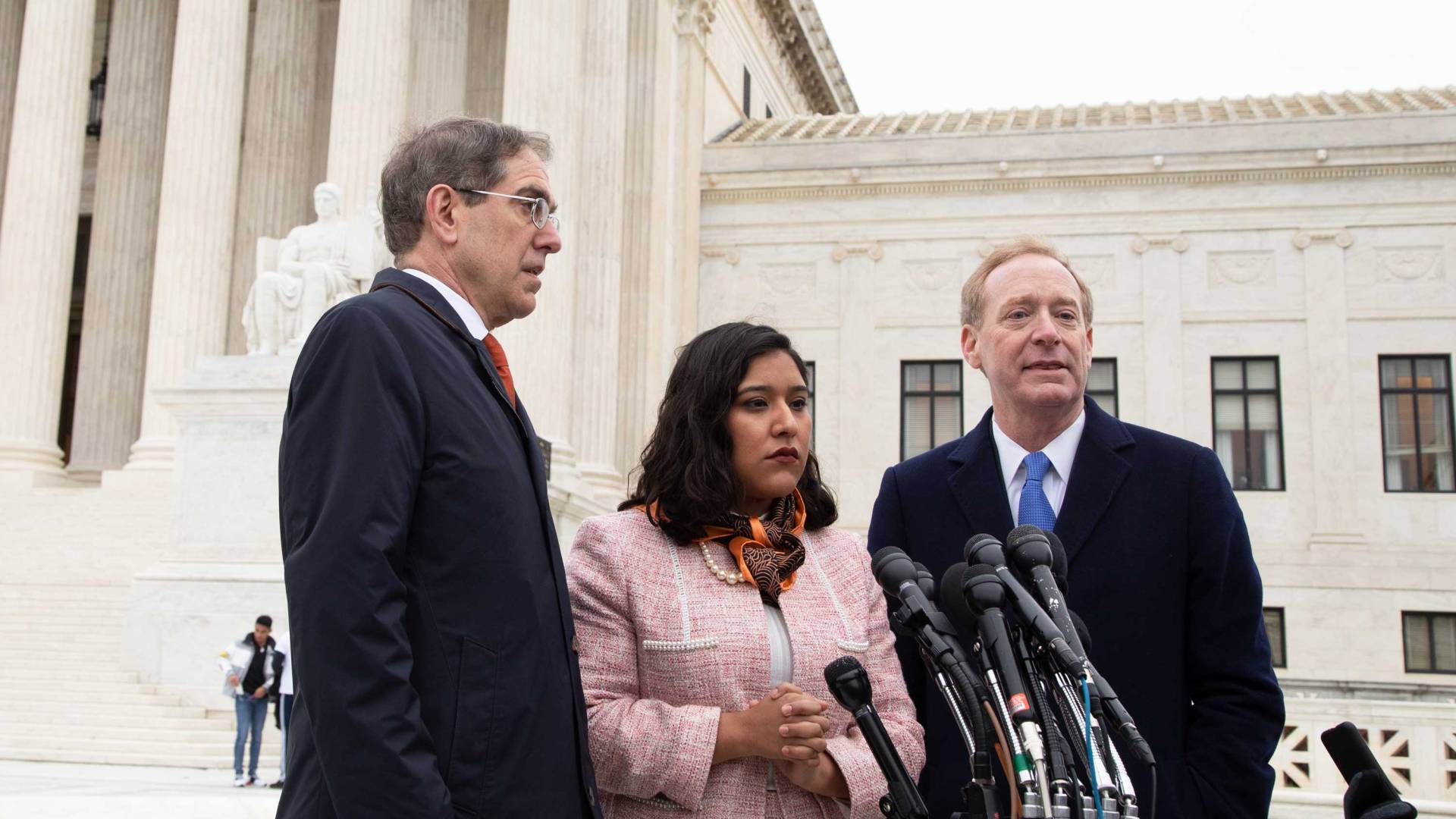 Responding to the moment

Eisgruber’s presidency has come at a time when the country has been buffeted by bitter political polarization, mounting distrust in institutions, a global pandemic — and a profound national reckoning with racism. Eisgruber initiated comprehensive efforts at Princeton to combat systemic racism, including asking every academic and administrative unit to develop racial equity plans, and to hold the University publicly accountable through annual DEI reports, launched last year. Among other initiatives to promote racial equity is a major push to increase diversity among the faculty and graduate student body.

When politics has directly threatened the ability of Princeton and the broader higher education sector from fulfilling their mission, Eisgruber has intervened and elevated the conversation toward sensible policy, including through crucial support for the federal government’s Deferred Action for Childhood Arrivals (DACA) program and other immigration-policy issues that impact colleges and universities. Eisgruber’s outspoken defense of free speech and academic freedom has also resonated at a time when free expression has come under fire from voices across the political spectrum. 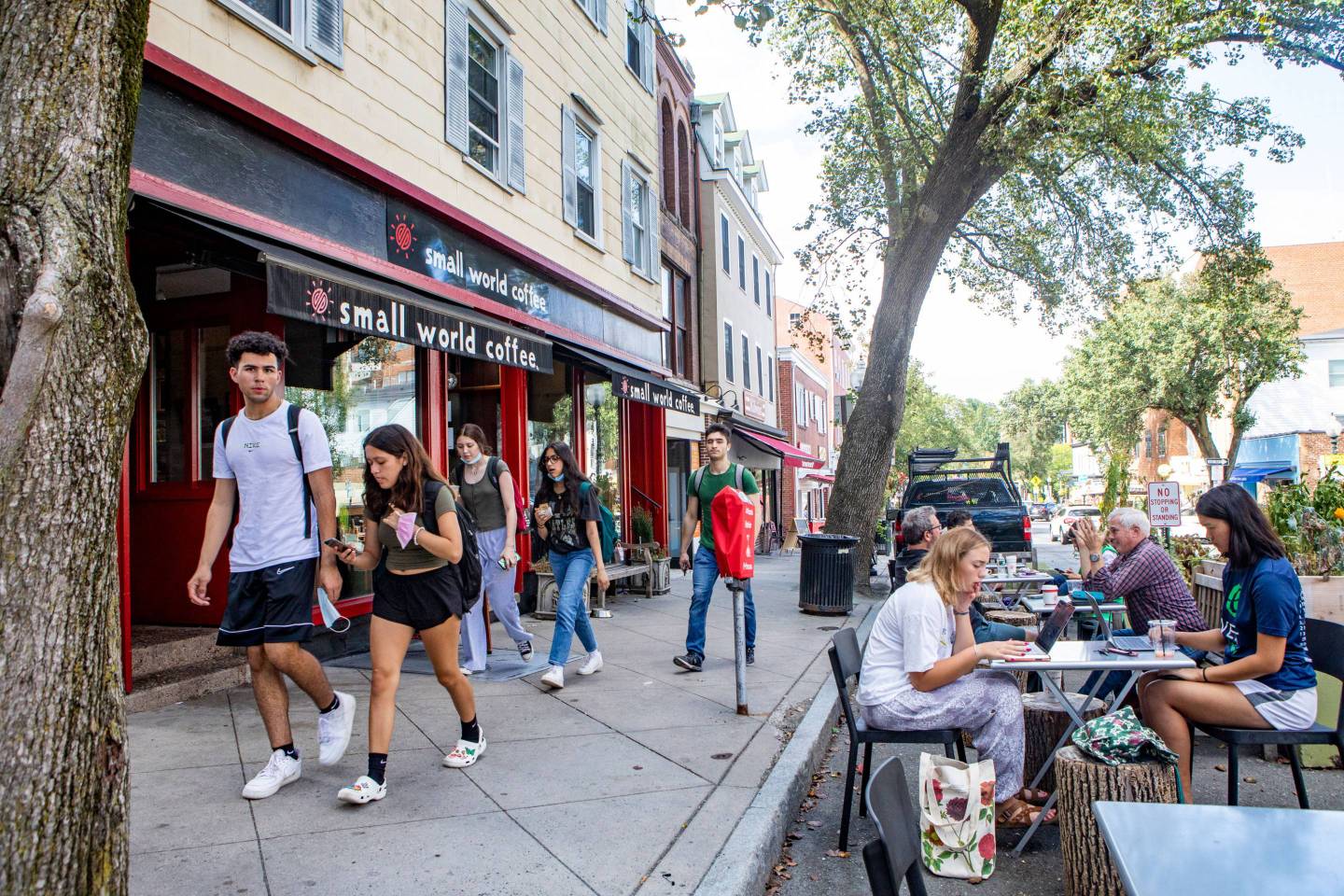 The University has strengthened its ties to the municipality of Princeton, including engagement with the Princeton Council, as well as with the communities of West Windsor, Plainsboro and Trenton.

As Princeton and the world look toward a post-pandemic phase, Eisgruber’s strategic priorities are grounded in Princeton’s unchanging commitment to truth-seeking, and to excellence in teaching and research. In his annual State of the University letter this year, he highlighted a focus on leveraging strong endowment returns to expand Princeton’s “audacious bets on human talent” and exploring “new dimensions” to Princeton’s teaching and research mission, including initiatives that might allow additional groups of students to benefit from a Princeton education — and who will in turn be of service to the country and humanity.

“I am proud of the way that Princeton’s faculty, staff, students and alumni pulled together in response to the challenges of the last two years,” said Eisgruber, “and I owe a special debt of gratitude to my senior administrative team, who share fully in the credit for what this University has accomplished over the last nine years. I look forward to working with them, and with this extraordinary community, to advance Princeton’s mission of excellence in teaching, research and service in the years ahead.”

For more information about President Eisgruber, please visit the Office of the President webpage, which includes his speeches, writings and blog.