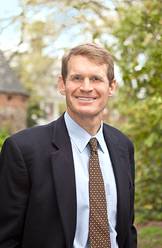 Clayton Marsh, University counsel since 2002, has been named deputy dean of the college at Princeton University, effective July 1. Marsh will succeed Peter Quimby, who is leaving Princeton to become the head of the Governor's Academy in Massachusetts.

"Clayton is passionate about undergraduate education and is widely considered to be an outstanding teacher at Princeton," said Valerie Smith, who will become dean of the college July 1. "His capacious intellect, commitment to teaching and wide-ranging knowledge of Princeton will serve him well in his new position."

Smith, Princeton's Woodrow Wilson Professor of Literature and a professor of English and African American studies, noted that Marsh emerged as the clear leader in the search and his appointment was enthusiastically endorsed by many senior faculty members and administrators.

"I am delighted that Clayton Marsh has agreed to serve as deputy dean of the college," said Princeton President Shirley M. Tilghman. "His long association with our University -- as a member of the class of 1985, as a University counsel, and as a dynamic teacher in our freshman seminar and American studies programs -- has given him a breadth of perspective and a depth of institutional knowledge that will greatly benefit both our undergraduates and his colleagues in West College."

Princeton Provost Christopher Eisgruber said, "During his years at Princeton, Clayton has worked collaboratively and successfully with many faculty members, and he has demonstrated genuine enthusiasm for undergraduate teaching. He is uniquely suited to his new role and I look forward to having him as a colleague in the academic administration."

Marsh will direct a number of academic programs and initiatives, and advise undergraduates interested in pursuing independent concentrations. Primarily, he will work closely with Smith on all matters relating to the design and content of the undergraduate curriculum. As the secretary to the Faculty Committee on the Course of Study and as a member of the Council on Science and Technology, he will advise and support individual faculty members, academic departments and certificate programs in their efforts to create new courses and programs, and also will participate in the development of proposals and the administration of funds for curricular innovation.

In conjunction with a faculty executive committee, Marsh will shape and oversee the freshman seminar program. He will have supervisory responsibility for the Princeton Writing Program, the Program in Teacher Preparation, the McGraw Center for Teaching and Learning, and the Community-Based Learning Initiative, while also serving as the University's faculty athletics representative to the NCAA and the accreditation liaison officer to the Middle States Association of Colleges and Schools.

"I am honored to be joining Val and her colleagues in West College and thrilled to have this opportunity to participate in shaping the academic journey of our undergraduates," Marsh said. "I look forward to working closely with our faculty and administrators in their ongoing efforts to ensure that Princeton continues to be a place that changes lives through the power of its teaching, the vitality of its curriculum and the quality of its programs for academic support."

As University counsel, Marsh has advised and represented the University in a broad range of legal and administrative matters, especially in the areas of sponsored research and intellectual property. His counsel and advocacy for Princeton have been instrumental to the advancement of many research initiatives and scientific collaborations and, last November, he was closely involved in the winning trial defense of the University's patent that Eli Lilly & Co. licenses to make the cancer treatment known as Alimta.

Marsh also has held a variety of University-wide appointments, including serving as: one of seven trustees of the Stanley J. Seeger Hellenic Fund, the foundation supporting the Program in Hellenic Studies; chair of the NCAA Certification Steering Committee that conducted a comprehensive self-study of Princeton athletics in 2007-08; and a member of the Eating Club Task Force. He is a fellow of Mathey College.

Appointed a lecturer in English in 2003, Marsh has taught freshman seminars on self-invention and imposture in American literature, as well as an upper-level American studies seminar on American trials and literature. His research has focused on mid-19th-century American literature and culture.

An active member of the Princeton community, Marsh has served since 2006 as president of the board of Princeton Young Achievers, a local nonprofit organization that provides after-school educational programs for nearly 100 underserved children in Princeton's public and affordable housing neighborhoods.

Quimby selected as associate dean of the college

Colagiuri selected as deputy dean of the college at Princeton