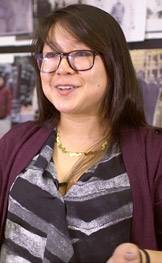 Princeton University senior Wendy Li, above, is writing her thesis in the Woodrow Wilson School of Public and International Affairs while pursuing a certificate in visual arts. In this video, she talks exploring her family history through photography.

Inspired by learning experiences both in and out of the classroom — around campus and across the globe — all Princeton undergraduates tackle a monumental academic challenge by completing a senior thesis. The thesis, considered the capstone of Princeton students' academic journey, is an independent work that requires seniors to pursue original research and scholarship under the guidance of faculty advisers.

Li is pursuing a certificate in visual arts in the Lewis Center for the Arts, and her senior thesis show, "Self-Preservation," explored the role of photographs in discovering one's identity and creating memories.

Li collected photos and documents to tell her family's story, beginning with her grandparents in China and continuing with her parents' moves to Canada and the United States, for the show displayed on campus for a week in March. As visitors moved through her photo timeline, they could sense the progression of time as the same individuals were featured in most of the photographs.

"My thesis is sort of a play on the historical museum," said Li, of Chester Springs, Pennsylvania, who is majoring in the Woodrow Wilson School of Public and International Affairs. "I'm thinking about how archives are displayed and how they are incorporated into history."

One of Li's goals for the show was to get visitors to think about how the photographs taken by her family reflected political and cultural events.

Senior Wendy Li talks about her senior thesis show, "Self-Preservation," which explores the role of photographs in discovering one’s identity and creating memories. (Video by Danielle Alio, Office of Communications)

Director of the Program in Visual Arts Joe Scanlan advised Li on her thesis show, particularly as she struggled with how to display the photos and documents.

"For Wendy's show, it was challenging because she has an attachment to the material," he said. "If you are going to make a successful show, at a certain point you have to be able to remove yourself and objectively or subjectively look at what you've got and see if it is going to be legible to anyone else who sees it. … There were so many threads that went through the show, you could pick up any one of them and have a really meaningful experience."

Li is writing a thesis for the Wilson School on the role of women in developing economies, specifically in rural China. Li recognizes that her Wilson School major and her studies in visual arts are different yet complement each other.

"In the Woodrow Wilson School, a lot of what we are asked to do is think analytically and rationally and use concrete data to argue specific points," Li said. Her work in visual arts allows her to explore policy issues through an individual and emotional lens. Said Li, "While [using data] is an important thing to do, a part of me has always thought, 'instead of running a regression on how people rate their happiness, why don't you just ask them what makes them happy?'"

After graduation, Li will bring her perspective to the policy world, joining the general counsel's office within the Office of the U.S. Trade Representative in Washington, D.C.