The discovery of a single anatomical difference between males and females of a species of Stegosaurus provides some of the most conclusive evidence that some dinosaurs looked different based on sex, according to new research.

Princeton University research published in the journal PLoS ONE found that the back plates of the species Stegosaurus mjosi came in two varieties that indicated the animal's sex — short and wide, and tall and narrow. Females had one type of plate and males donned the other. The lack of a particular female-specific bone tissue found in birds and some dinosaurs, however, made it difficult to determine which sex had which plate type. 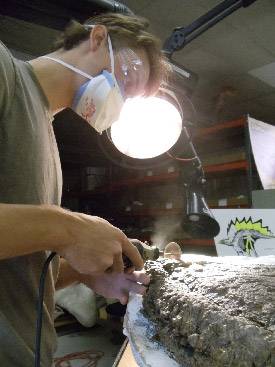 The discovery of a single anatomical difference between males and females in the species Stegosaurus mjosi provides some of the most conclusive evidence that some dinosaurs looked different based on sex, according to new Princeton University research. The species has two varieties of plates that author Evan Saitta (above, cutting microscope samples from an S. mjosi plate), who graduated from Princeton in 2014, determined indicated an individual's sex. (Photo courtesy of the Judith River Dinosaur Institute)

Author Evan Saitta, who graduated from Princeton in 2014 and conducted the research for his senior thesis project, nonetheless drew from existing animals, particularly horned animals, to suggest that the distinct shape of male and female S. mjosi plates indicated two different functions. He supposes that the tall, narrow plates belonged to females, who would have needed the pointier plates to defend themselves against predators. The wide plates, which were 45 percent larger in surface area, likely served as "billboard" displays males used to attract females, similar to the plumes of the male peacock.

Beyond the implications for Stegosaurus, the research establishes that sexual dimorphism — in which males and females of a species have distinct physical forms — could exist in non-avian dinosaurs, which includes iconic reptiles such as Tyrannosaurus and Brontosaurus, Saitta said. Existing work on sexual dimorphism in non-avian dinosaurs had been inconclusive to the point that some paleontologists began to think that male and female dinosaurs did not differ physically from one another, he said.

"To people who say that dinosaur ornamentation was not for sexual display, we can say that we now have an example. We can't have that broad generalization anymore," said Saitta, who is now a graduate student at the University of Bristol in the United Kingdom.

"My results apply to S. mjosi and no other species, but I'm sure this Stegosaurus did not exhibit the only sexual dimorphism in non-avian dinosaurs," he said. "This is really just the most convincing case, the most conclusive example." 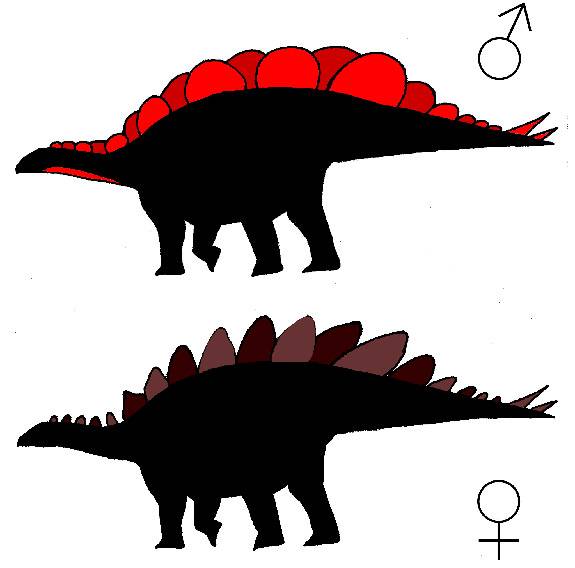 Of the two plate varieties — short and wide, and tall and narrow — females had one type of plate and males donned the other. Lacking fossil evidence of which sex had which plate type, Saitta supposed that males (top) had the wide plates, which likely served as "billboard" displays males used to attract females. Females (bottom) may have had the tall, narrow plates to defend themselves against predators. (Illustration courtesy of Evan Saitta, University of Bristol)

A key feature of Saitta's work is the extent to which he explored and ruled out other explanations for the two different types of plates. Possible explanations could have been that the plates came from different species, that they demarcated sexual maturity or that they were simply from different parts of the same animal.

"I had to go through and test all these alternate explanations because there's no test we can do on a fossil to get a positive result for sexual dimorphism," Saitta said. "You have to test for all the other hypotheses and get a negative result."

Andrew Farke, the Augustyn Family Curator of Paleontology at the Raymond M. Alf Museum of Paleontology in Claremont, California, said that the work provides a potential foothold for other researchers wanting to explore sexual dimorphism in Stegosaurus and possibly other non-avian dinosaurs.

"This is very species specific, so there's a lot of work that needs to be done to extend this to other animals," said Farke, who is familiar with the study but had no role in it. "It's not the end of the road, but I think it will stimulate people to look at this issue in Stegosaurus. Anytime you have many people plugging away at something it's good because that's how science moves forward." 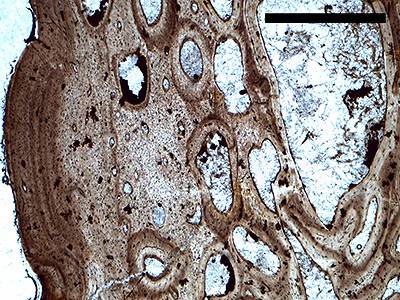 Dinosaur bones exhibit internal layers that mark each year of growth, similar to tree rings. When an animal's full growth is reached, the rings become a tightly packed outer layer called an "external fundamental system," or EFS (above). Using a microscope, Saitta saw reduced growth in both varieties of plates, and an EFS in two of the tall and narrow plates. This established that the tall and wide plates came from both sexually mature young adults and fully grown old adults. (Image by Evan Saitta, University of Bristol)

The research is "one of the best treatments so far" of sexual dimorphism in a Stegosaurus species, Farke said. Saitta not only examined numerous plates, but he also ruled out other possible causes of S. mjosi's plate shapes in a structured way that other researchers could draw from, he said.

"It certainly sets a precedent by providing a template for the factors you have to work out when examining this issue," Farke said. "Paleontologists have known for a while that those are things you have to check for if you want to check for things such as sex differences. I think what Saitta did was really go through the right steps to make sure that he could rule out some of these ideas."

The plates Saitta examined came from a site in central Montana that boasts an unusually rich collection of S. mjosi remains. The site is in the northern extremes of the Morrison Formation, a massive wealth of Jurassic-period dinosaur fossils that extends southward from northern Montana to the middle of New Mexico, and stretches longitudinally from Utah to Kansas.

First described in 2001 (and originally classified as Hesperosaurus), S. mjosi is distinguishable from later stegosaurs by its tail vertebrae, which have a teardrop shaped top. The animal's back plates also are not uniform, which is unusual — while other species have distinct plates shared by all individuals, the plates of S. mjosi come in the two varieties Saitta studied. Because the variation only occurred in the plates, Saitta knew he was working with the same species. The wide- and tall-plated stegosaurs coexisted without any indication that they occupied separate ecological niches, as would be expected if they were actually two different species, he said.

Saitta turned to modern medicine to rule out if the plates distinguished juvenile S. mjosi from animals that were sexually mature. Because Stegosaurus plates are thought to have partly served as a mating display, a 2011 Japanese study found that the presence of large "vascular piping" that brought blood to the bone tissue beneath each plate's hard keratin exterior appeared after an individual reached sexual maturity. Saitta examined 10 S. mjosi plates with a CT scanner and found the piping in all 10, meaning that they all belonged to sexually mature individuals.

To further refine the age of those individuals, Saitta looked for a specific growth marker that reptile bones develop. Dinosaur bones exhibit internal layers that mark each year of growth, similar to tree rings. When an animal's full growth is reached, the rings become a tightly packed outer layer called an "external fundamental system," or EFS. Saitta had three, 2-centimeter-square samples of each plate transferred to microscope slides. He saw reduced growth in both varieties of plates, and an EFS in two of the tall and narrow plates. This established that the tall and wide plates came from both sexually mature young adults and fully grown old adults.

The short and wide plates (left) from S. mjosi were 45 percent larger in surface area than the taller, pointier plates. This variation is unique to this S. mjosi as other species of Stegosaurus have distinct plates shared by all individuals. (Image by Evan Saitta, University of Bristol)

"People have been calling on this kind of rigor before me," Saitta said. "I didn't come up with the approaches, but listening to the criticism of previous work is what drew me to my methodology of testing every alternative explanation."

Saitta plans to follow up with his research by exploring the possible result of sexual dimorphism in S. mjosi on biology, such as how a trait evolved in response to a species' risk of predation or ability to attract mates.

Beyond his research, Saitta said that the work makes exhaustive scientific work more accessible by tying it to a popular topic and an understandable concept.

"Sexual dimorphism is something so common in nature and so easy to understand, it's relatable," Saitta said. "But in order to explain the science you need to go into a methodologically rigorous explanation and it's a great educational experience that way. It can take someone with a basic interest and draw them into a rigorous discussion of science."

The paper, "Evidence for sexual dimorphism in the plated dinosaur Stegosaurus mjosi (Ornithischia, Stegosauria) from the Morrison Formation (Upper Jurassic) of Western USA," was published April 22 in PLoS ONE. This work was supported by Princeton's Office of the Dean of the College, Mountlake Field Research Fund and Fred Fox Class of 1939 Fund.

Horner: Tyrannosaurus rex may have been more like a vulture than a hawk

What did Megalodon eat? Anything it wanted — including other predators