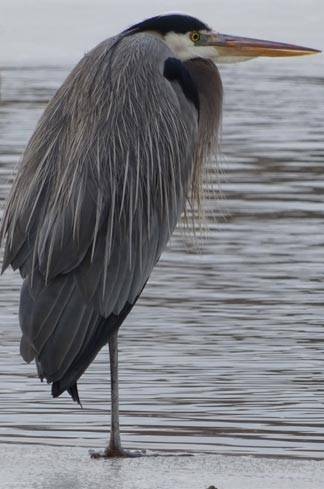 Princeton University's Lake Carnegie is one of the most open and natural areas of campus, a resource to the University and local communities, as well as a home to abundant wildlife such as great blue herons (above).

Lake Carnegie, which bounds the south end of campus, is one of Princeton's most open and natural spaces, a resource to the University and the local community as well as a home to wildlife.

Its immensity glistens in the sun. On days when the sky ends with a low, dusky cover of clouds, the lake seems to widen until it swallows the dull horizon. Animals of all types live in its waters and roam its forested shores. It's a part of campus where nearly anyone can show up and not look out of place: fishermen; students and tourists in rented kayaks; ice skaters and hockey players; young lovers on a secluded shore. There's no application, no entrance fee.

As the University continues to evolve and maintain its prominence in the modern world, the lake persists as part of Princeton's rural nature, a place where the personal and peaceful character of the University and surrounding community is reflected and preserved.

The photo essay below captures some of the many seasons and faces of the lake, and some of the many people and creatures attracted to it. While these photos and facts may provide a glimpse of Lake Carnegie, it is physically and temporally too much, too protean, to capture wholly. It demands that one experience it personally and often. 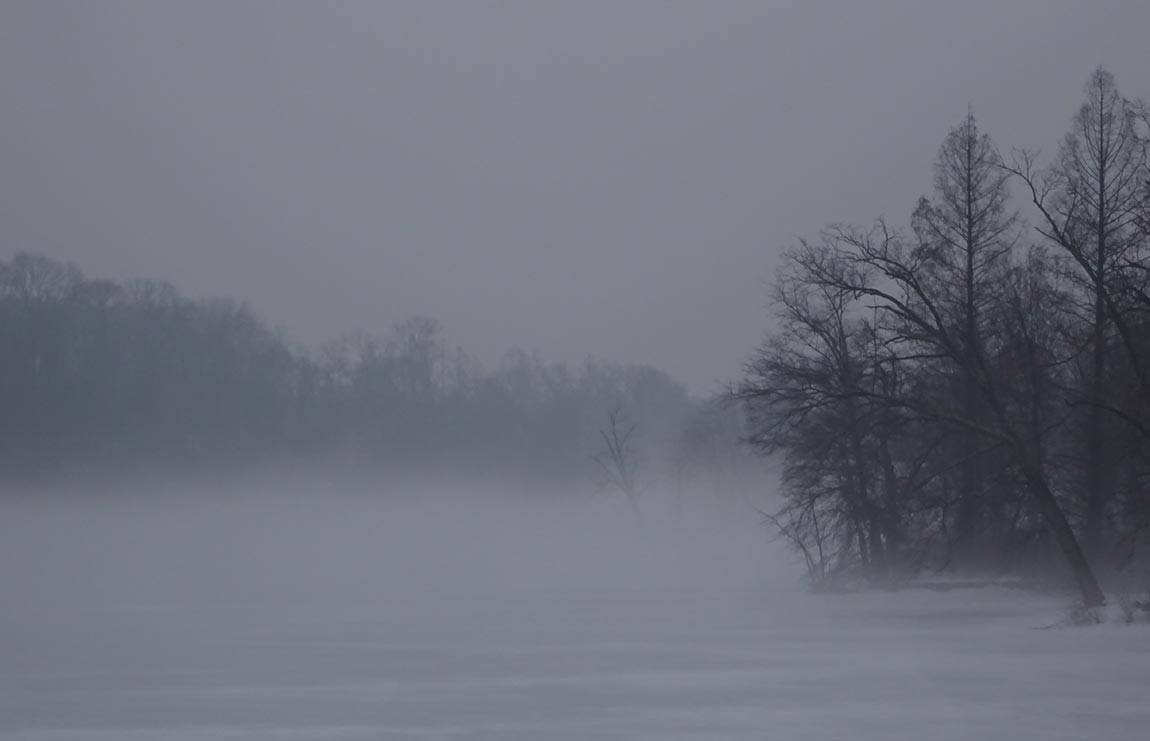 The lake extends for nearly four miles, curving away from campus toward Kingston, New Jersey, like an "s" attempting to straighten itself. It crosses under the bridges for Washington and Harrison roads, which offer sweeping views. This eastward view from the Washington Road bridge on a balmy day in early March shows heavy mist rising from the still-frozen lake to mingle with the shoreline. The publicly accessible Delaware and Raritan Canal State Park towpath (right) runs the length of the lake's south shore. The lake's north shore hosts Princeton's C. Bernard Shea Rowing Center — which includes the Class of 1887 Boathouse — a University-owned trail and woodland, and private residences. (Photo by Morgan Kelly, Office of Communications) 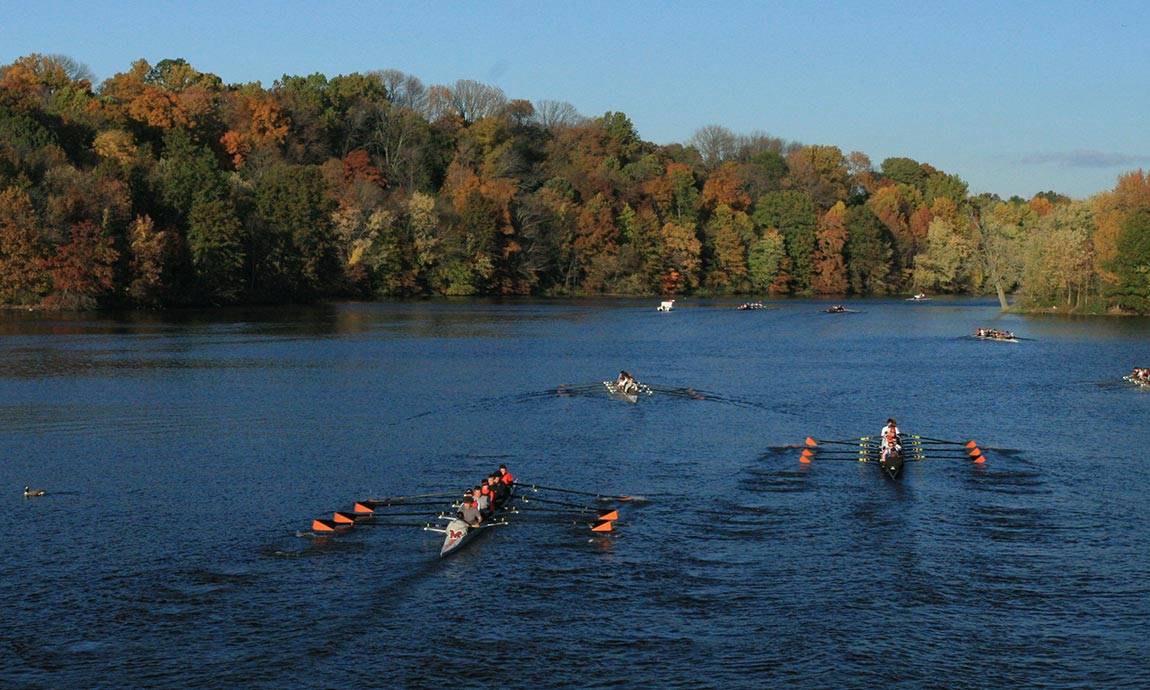 Based in the Shea Rowing Center at the lake's western end, Princeton's men's and women's rowing teams (above) use the lake to train and host competitions with other universities. Olympic rowers also have long used the lake as a training site. Buoys along the lake's surface mark the course the crew teams follow. The University rowing teams glide across the lake's surface in all seasons and weather (unless the lake freezes in winter), and can be seen most days, be it in the bright early mornings of summer or the dark evenings of winter. (Photo by Denise Applewhite, Office of Communications) 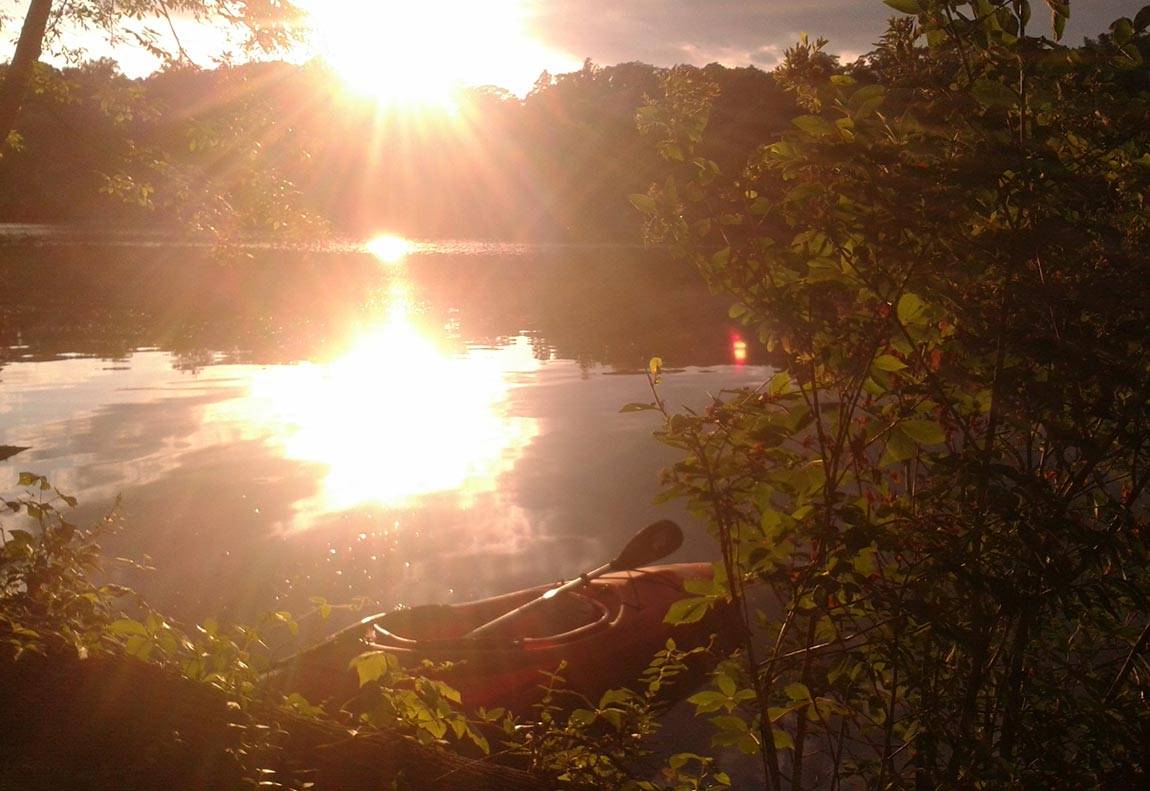 Although Lake Carnegie is owned and maintained by the University, the local community frequently uses it for rowing, kayaking and canoeing, fishing, or walking its shores. (Photo by Morgan Kelly, Office of Communications) 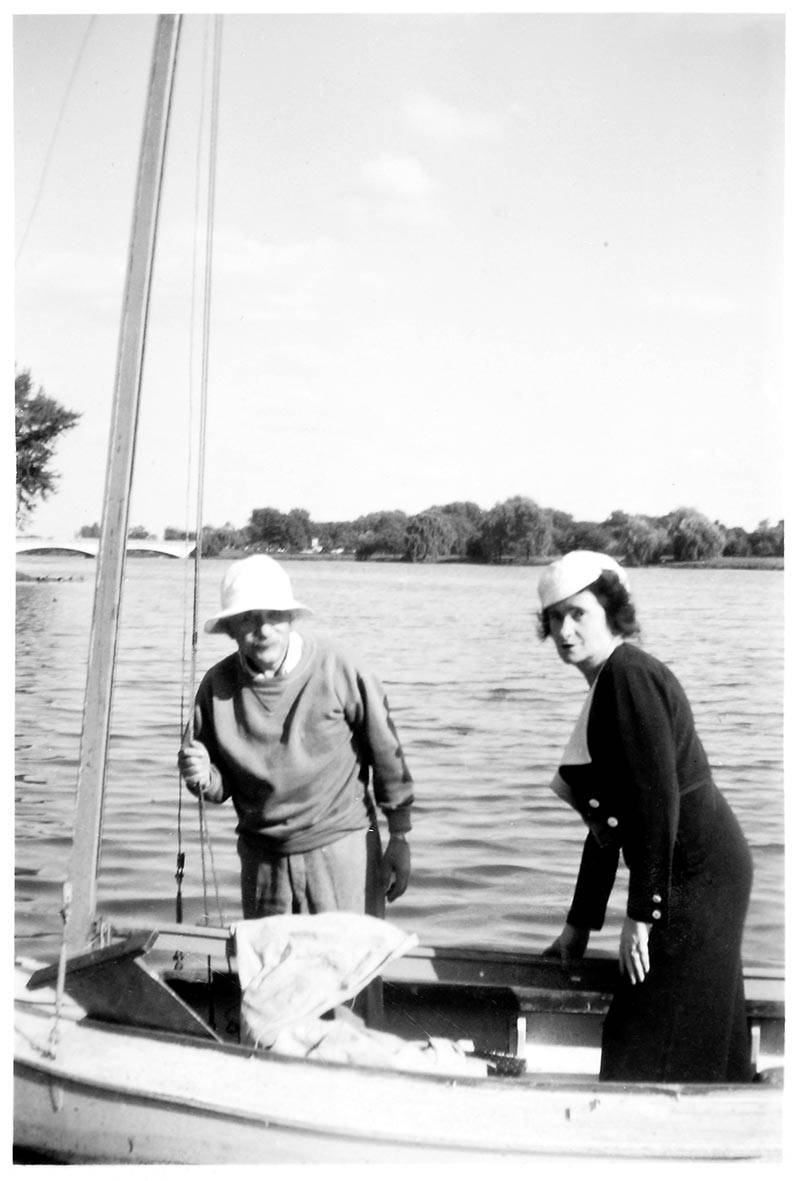 Albert Einstein, pictured here with close friend and former University librarian Johanna Fantova, was among the lake's many users over the decades. According to Fantova's diary available in the Princeton University Library's Department of Rare Books and Special Collections, the two spent many enjoyable hours on Lake Carnegie. "Seldom did I see him so gay and in so light a mood as in this strangely primitive little boat," wrote Fantova, who kept a diary of their conversations. (Photo courtesy of the Princeton University Library) 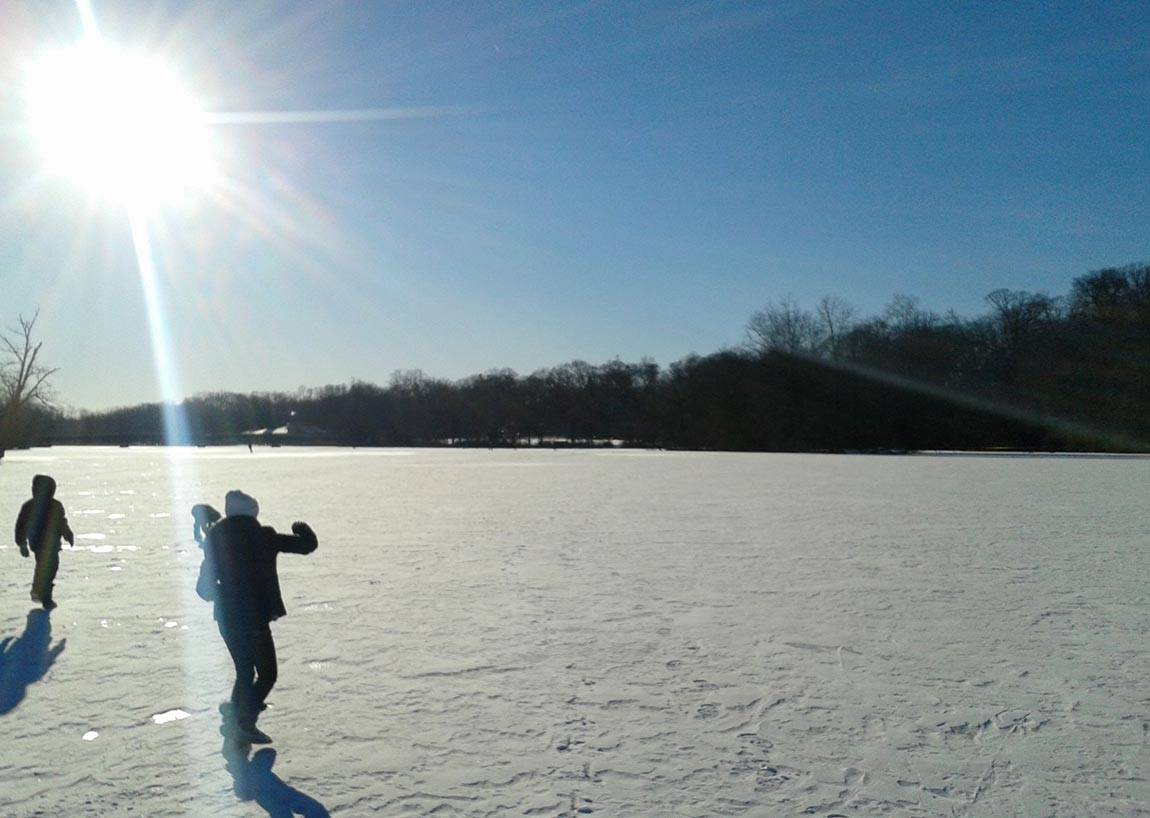 In years when the lake freezes, the University announces when the lake is open to the public for ice skating, hockey or walking across its glossy surface. The borough determines when the ice has obtained a safe thickness. White flags above the boathouse and on the shore at the south end of the Harrison Road bridge indicate when the ice is safe for recreation. Red flags mean that the ice is not safe to be on. (Photo by Morgan Kelly, Office of Communications) 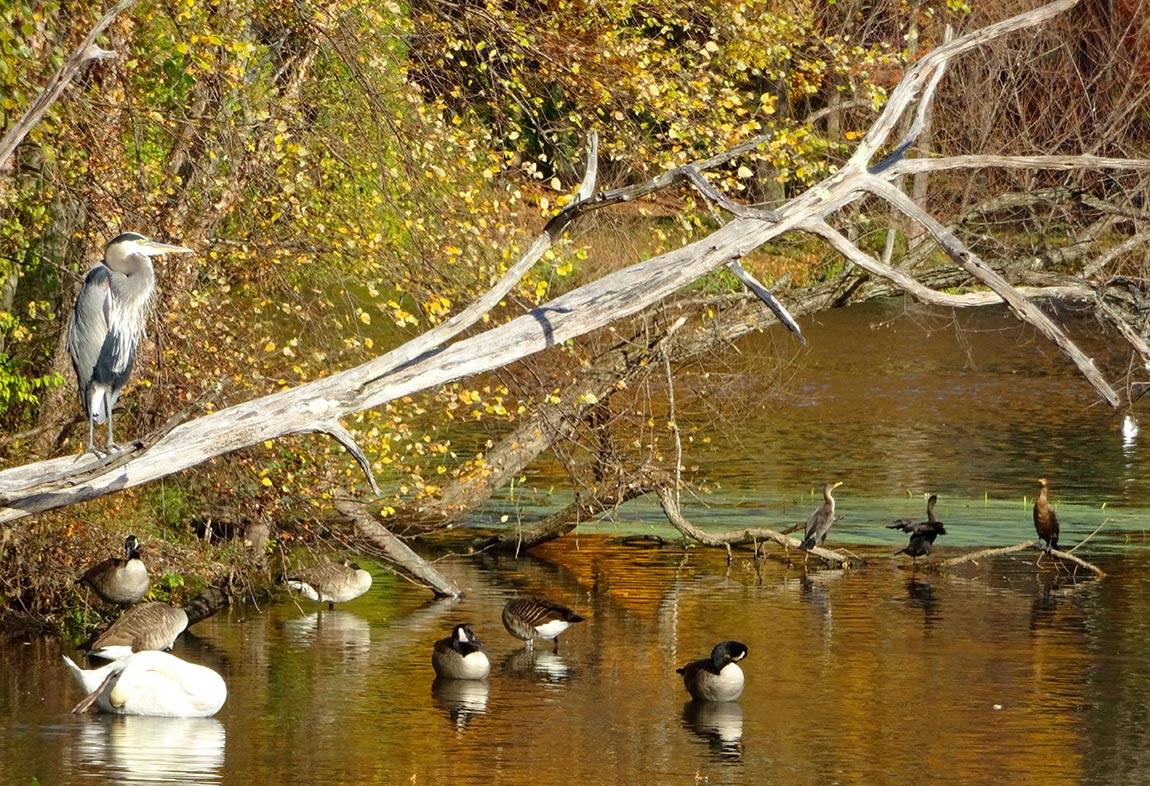 The lake's fish, open water and surrounding trees attract numerous bird species, both seasonally and year-round. The photo above features (clockwise from lower left) a mute swan, Canada geese, a great blue heron, a ring-billed gull and double-crested cormorants. Other bird species that can be found around the lake include bald eagles, egrets, mergansers, red-winged blackbirds and downy woodpeckers. (Photo by Morgan Kelly, Office of Communications) 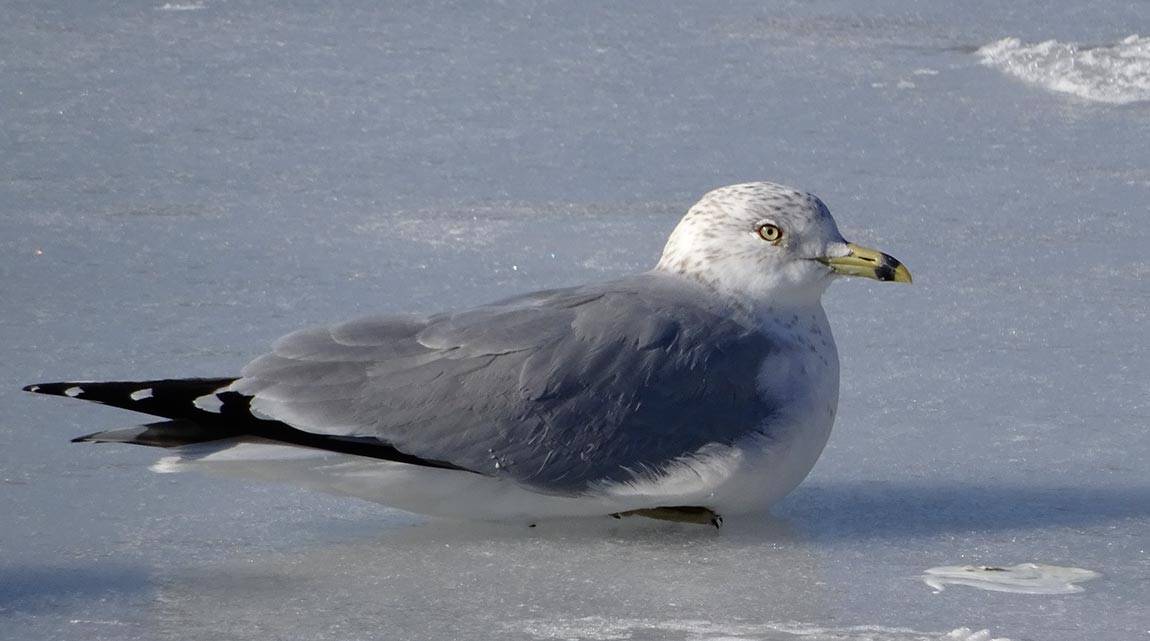 Like humans, animals make use of the frozen lake. Birds such as ring-billed gulls (above) and Canada geese gather on the safe and open expanse, while deer and fox walk across the ice to cross the lake. (Photo by Morgan Kelly, Office of Communications) 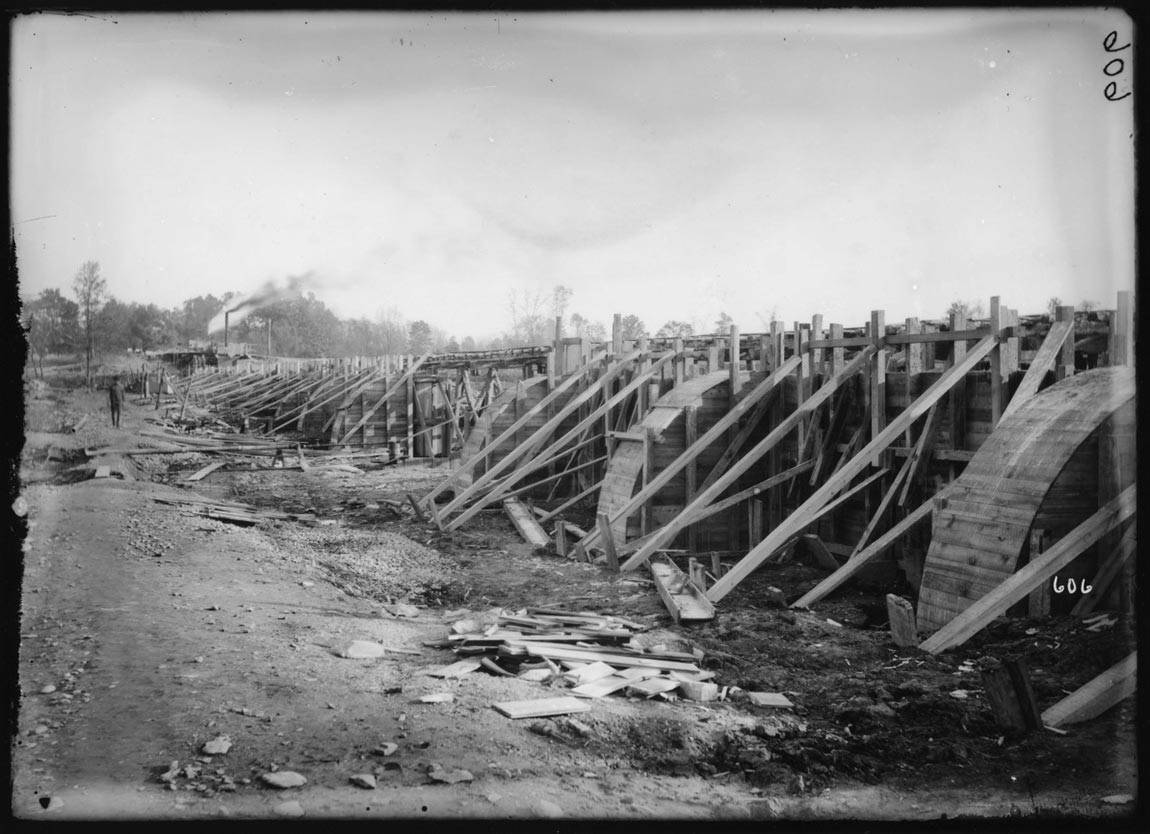 Lake Carnegie is the result of a dam built on the Millstone River in 1906 near Kingston. Supported by and named after steel magnate Andrew Carnegie, the lake was intended to relieve the University crew team from practicing on the Delaware and Raritan Canal, which bustled with freight traffic at the time. This photo shows the dam under construction. (Photo courtesy of Princeton University Archives) 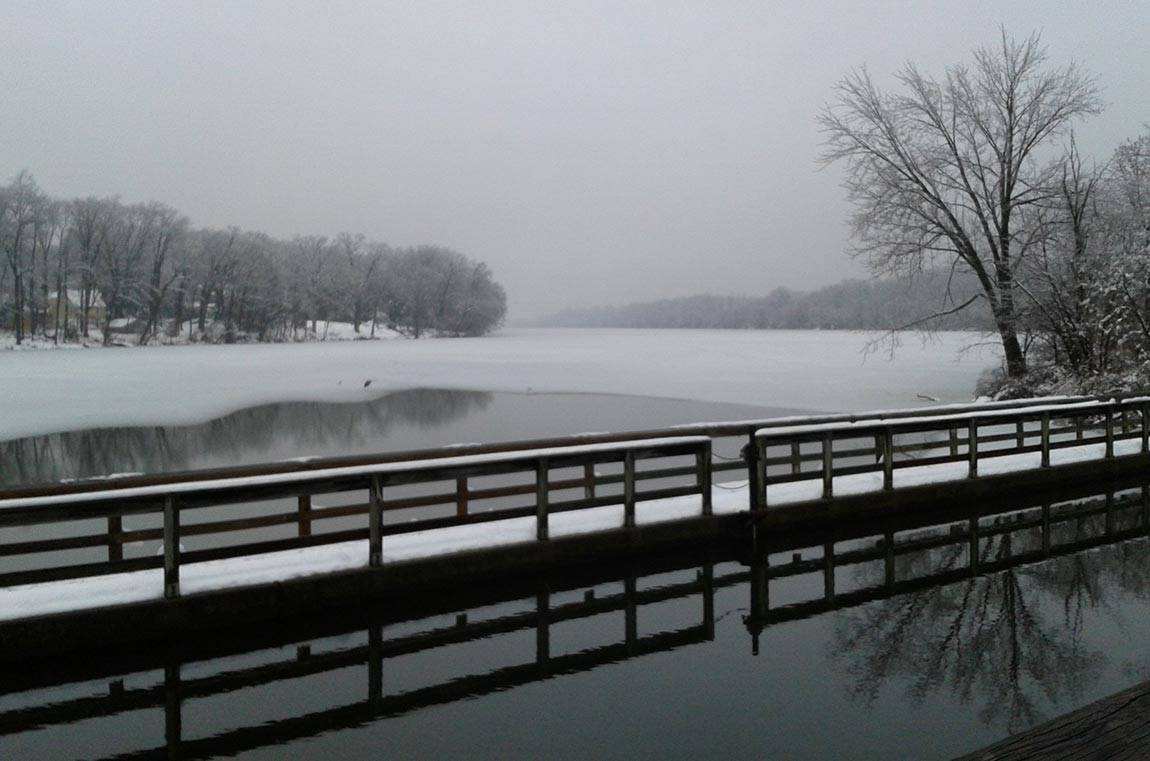 The Millstone River flows into the lake from the southeast, intersecting the Delaware and Raritan Canal at the Millstone Aqueduct (pictured) in West Windsor Township. The lake's basin consists of farmland that was purchased piecemeal then flooded by the Millstone and its tributary Stony Brook, which enters the lake roughly 1.5 miles south near Princeton's new Lakeside Graduate Housing. The nearly 40-mile Millstone flows north to join the Raritan River near Manville, New Jersey. (Photo by Morgan Kelly, Office of Communications) 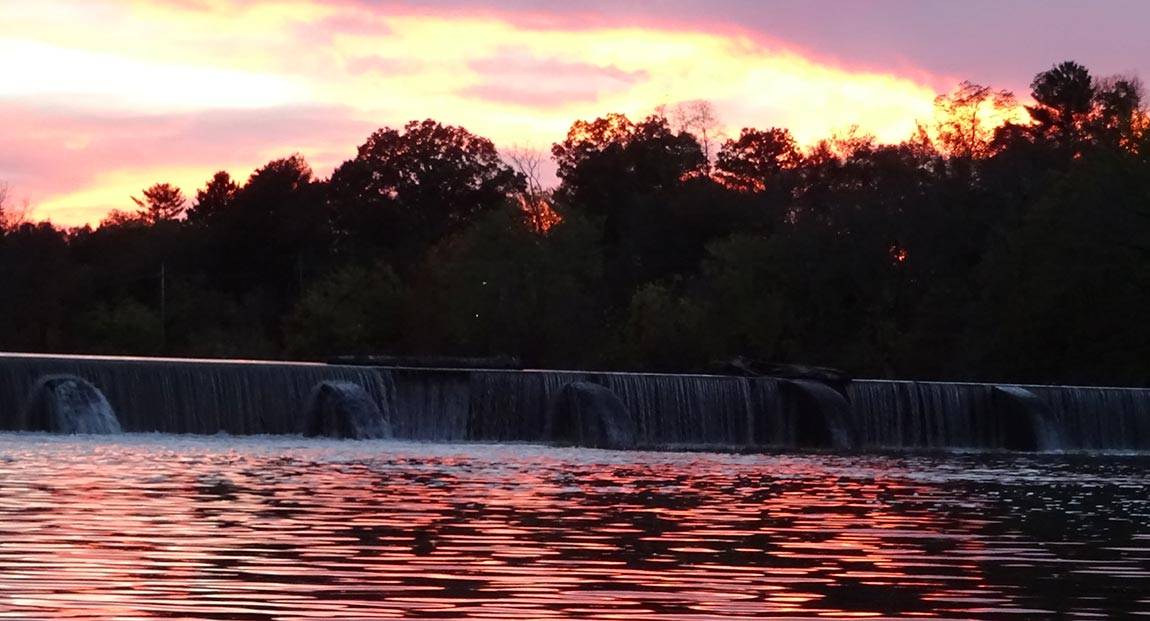 The dam near Kingston, accessible by the Delaware and Raritan Canal, is a popular area for fishing and gazing upon the lake. It also provides opportunities to view water birds such as great blue herons, double-crested cormorants and seagulls drawn by the low mud islands and river clams found on the dam's downstream side. In summer 2015, Princeton University facilities began routine structural maintenance on the north end of the nearly 110-year-old dam. The lake's water level was not affected. (Photo by Morgan Kelly, Office of Communications) 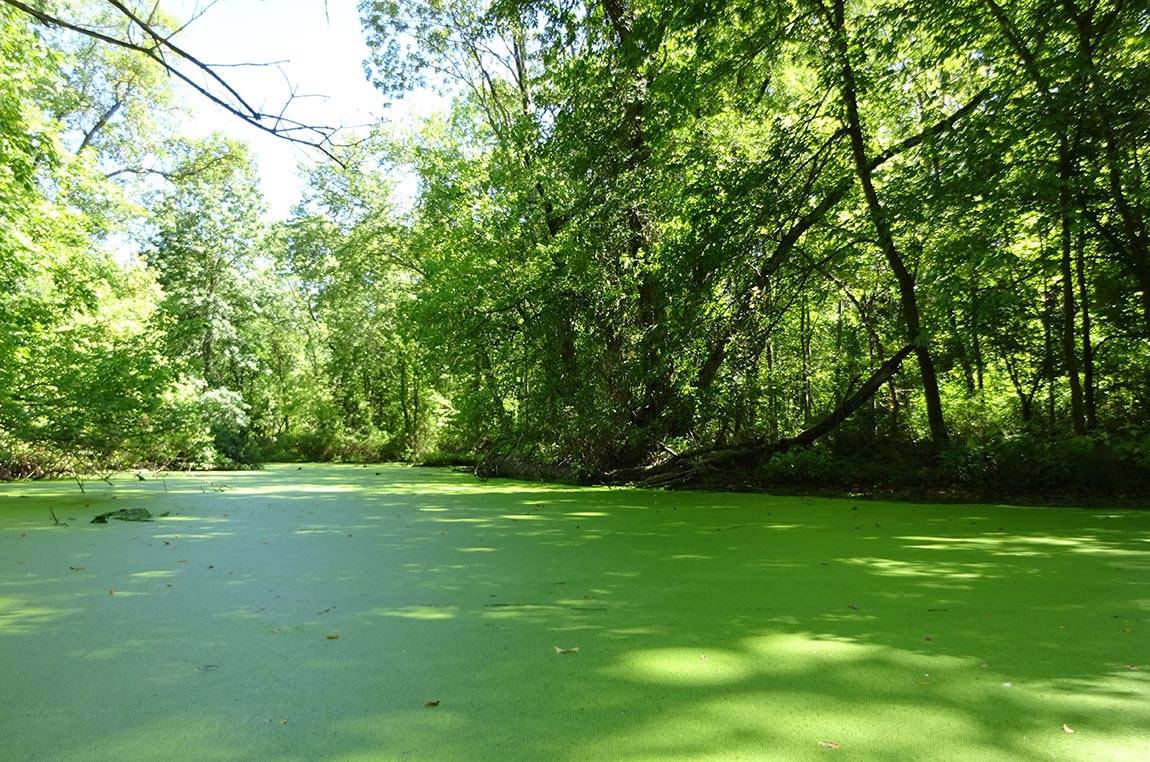 Lake Carnegie contains several islands of various sizes that span the surface from Stony Brook to Kingston, each situated about a half-mile from the next. Inaccessible to people, the islands provide habitat to numerous animals including Canada geese, white-tailed deer, beavers and fox. The stagnant channels between some of the islands and the mainland can form a thick coat of duckweed (above), the smallest known flowering plant, which is an important source of protein to animals such as water birds. (Photo by Morgan Kelly, Office of Communications) 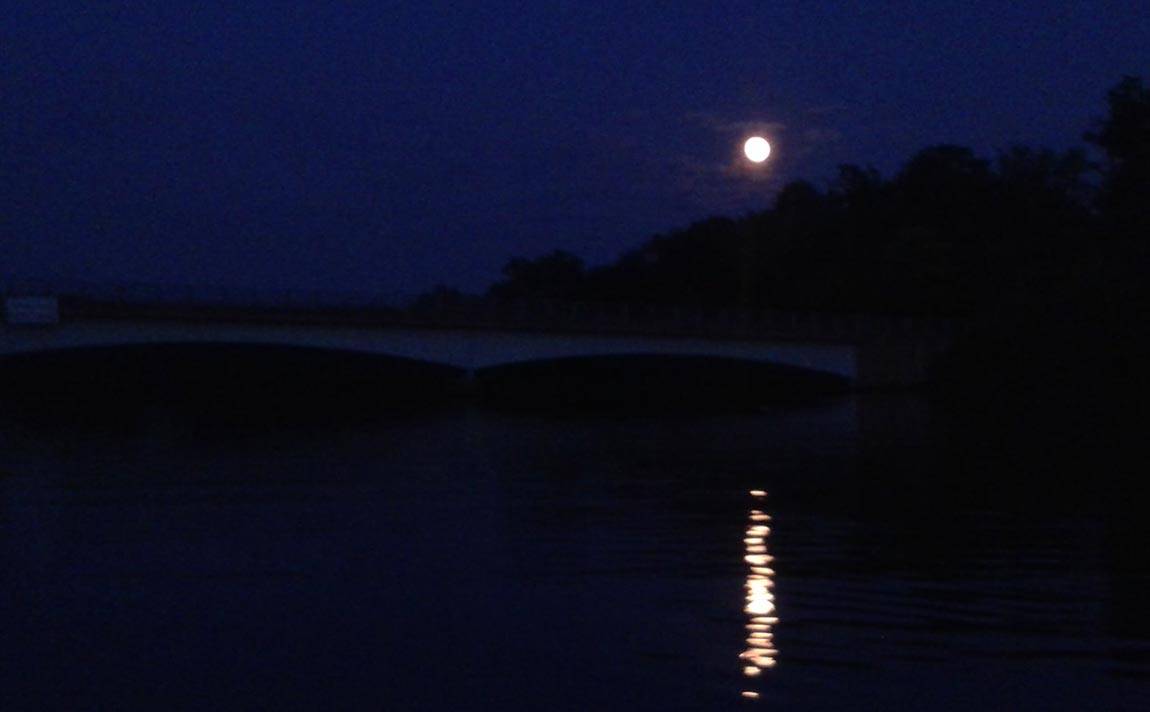 Night plunges the lake's undeveloped shore into a darkness dotted by stars or broken by the platinum radiance of a full moon rising over the trees. With few cars passing over the Washington and Harrison (pictured) road bridges in the evening, the chirps, hums, calls, splashes and scurries of animals can be heard all around. (Photo by Morgan Kelly, Office of Communications)