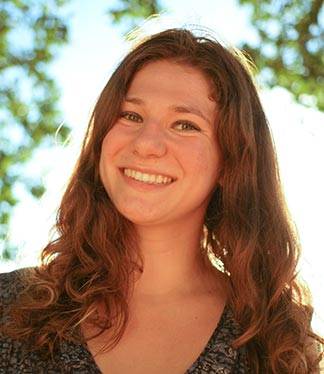 Princeton University senior Azza Cohen has been named a George J. Mitchell Scholar to study culture and colonialism at the National University of Ireland (NUI) Galway. The Mitchell Scholarships were awarded to 12 students nationwide by the nonprofit U.S.-Ireland Alliance based in Washington, D.C.

Cohen said she will pursue interests in history and documentary filmmaking while studying at NUI Galway.

"The Mitchell Scholarship would be my gateway to becoming a 'visual historian' — a new type of historian who documents human narratives in a visually compelling way," Cohen said. "At the National University of Ireland at Galway, I hope to immerse myself in the film festival and theater culture of the city, while pursuing the master's program in culture and colonialism. I also hope to take courses and attend lectures from the film studies department in pursuit of a truly interdisciplinary experience."

Cohen was selected from nearly 300 applicants for this year's Mitchell Scholarships, which recognize outstanding academic distinction, leadership and community service. Recipients spend a year of postgraduate study at institutions of higher learning in Ireland and Northern Ireland. Cohen is expected to begin her studies at NUI Galway this September.

"As impressive as her desire and capacity to absorb new knowledge is, even more extraordinary is the enthusiasm with which she plans and carries out her projects," Prakash said. "Everyone on campus, undergraduate and graduate students alike, knows Azza. She possesses a natural gift in drawing people and getting them enthused to undertake collective projects. This combination of intellectual curiosity and motivation and personal charisma is rare. This makes her an ideal Mitchell Scholar."

Cohen has studied the British Empire and the process of border formations in Northern Ireland and Ireland, and in India and Pakistan. She learned firsthand about the history of Northern Ireland while on a high school exchange program in Belfast.

At Princeton, Cohen's history senior thesis examines the process of postcolonial border formation in India, Pakistan and Bangladesh in the 1940s, and how borders affect people's everyday experiences. She also is making a short documentary about racial injustice in St. Louis County, Missouri, as a senior thesis in urban studies.

While at NUI Galway, Cohen said she hopes to create a documentary series about people who live on either side of national borders.

"Studying in the program in culture and colonialism will give me a deeper historical framework within which to start my next film project," she said. "This time next year, I hope to have my next film, which will explore the lived experiences on both sides of the border of Northern Ireland, screening in Galway and perhaps, if I'm lucky, at film festivals."

Purcell Carson, the adviser for Cohen's urban studies thesis, said she is thrilled that Cohen will get to study in Ireland next year.

"I've worked with Azza since her freshman year, and am continually impressed by her tenacity and her ability to harness visual storytelling in service of the community," said Carson, a lecturer and documentary production specialist in the Woodrow Wilson School of Public and International Affairs.

Princeton's Bridge Year Program inspired Cohen to become a documentary filmmaker. While living in India, Cohen volunteered at Guria, an organization dedicated to fighting human trafficking through legal and educational intervention. She later returned to the country with Class of 2014 graduate Shaina Watrous to produce and direct the documentary "Specks of Dust" about Guria. Cohen's work on the film was supported by a Dalai Lama Fellowship and a grant from the Projects for Peace.

"I am forever grateful to the Bridge Year Program for believing in me before I was a freshman," Cohen said.

She also is a co-founder of the Career Services Student Advisory Board, a member of the Commencement Committee for the Class of 2016, an opinion columnist for the student newspaper The Daily Princetonian, and a member of the Princeton Bhangra dance team. She received the Spirit of Princeton Award in 2015.