by Anna Windemuth, Class of 2017, for the Office of Engineering Communications

When Josh Umansky-Castro joined Engineers Without Borders as a freshman, he traveled to the remote mountain town of La Pitajaya, Peru, to help build and maintain two water distribution systems serving 21 families.

The pipe systems that carry water downhill from a distant spring were designed by Princetonians who came before him, and who left a lasting impact on the community they came to serve.

Two years later, Umansky-Castro, a junior majoring in mechanical and aerospace engineering at Princeton University, is making his own mark.

As one of two project managers for a new distribution system in Pusunchás, Peru, his team is building a system that will serve 120 families and provide over 6,300 gallons (24,000 liters) of running water per day. Each household is expected to have its own tap, a goal that local residents have strived for in the last 20 years.

"People have called us crazy," Umansky-Castro said, noting that the project is Princeton's most expansive one in the region so far. "It's going to be a lot of trenching." 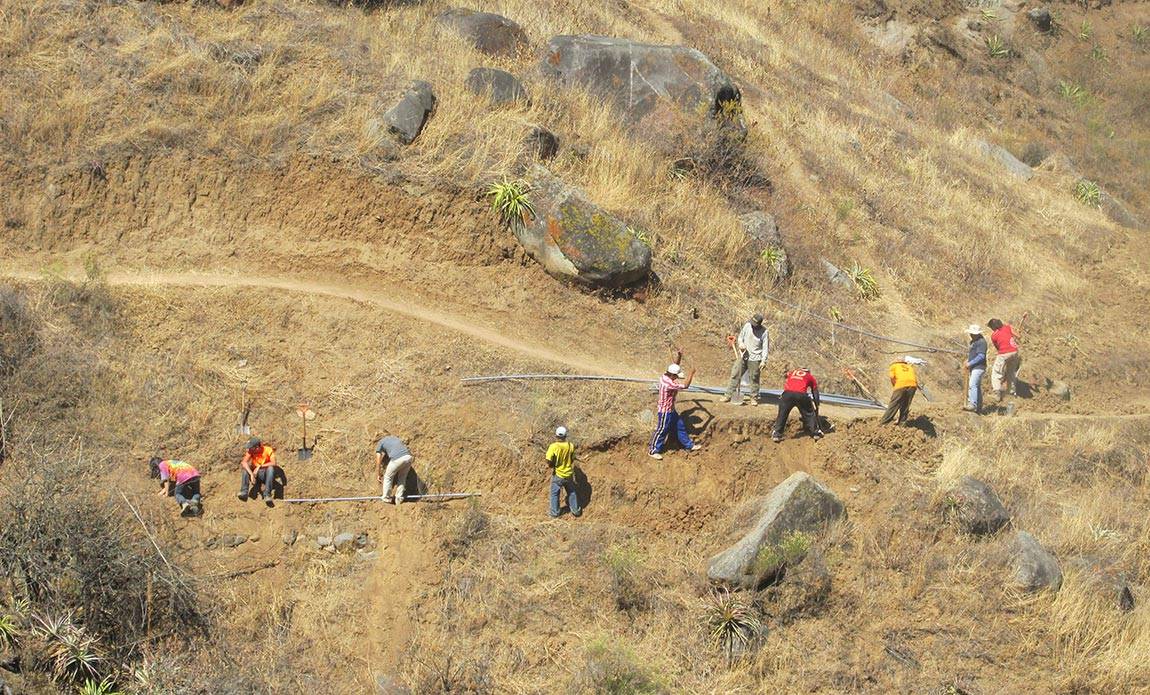 The Princeton University chapter of the service group Engineers Without Borders (EWB) received national recognition for its effectiveness in executing an expanding set of projects focused on providing clean water to communities in Africa and South and Central America. Students joined with community members in the summer of 2014 to dig a trench near La Pitajaya, Peru. (Photos by Josh Umansky-Castro, Princeton Engineers Without Borders)

It's the sort of dedication that has earned national recognition for the Princeton chapter. Among nearly 300 Engineers Without Borders programs in the United States, Princeton's was honored at the EWB-USA International Summit in Denver this month with the organization's Premier National Chapter award. The Princeton team also received the Premier Chapter award for the Northeast earlier this year.

The award recognizes a range of initiatives. In addition to the Peruvian pipeline, Princeton's EWB program is designing and building rainwater catchment systems — which transfer rainwater from a building's roof into a water tank through pipes — in the Dominican Republic and in Kenya.

"It's pretty incredible when you think of the scale of EWB nationwide," said Lucy Tang, a mechanical and aerospace engineering major and co-president of Princeton EWB. "The actual outcomes of the projects have been palpable for local people. Our students go out and do tough work."

Tang's co-president, Brendan Hung, an operations research and financial engineering major, said that the Princeton chapter develops strong relationships with the communities they serve, focusing on sustainability and regional needs.

"We are a successful chapter in balancing multiple programs, and we make sure to develop meaningful projects," Hung said. 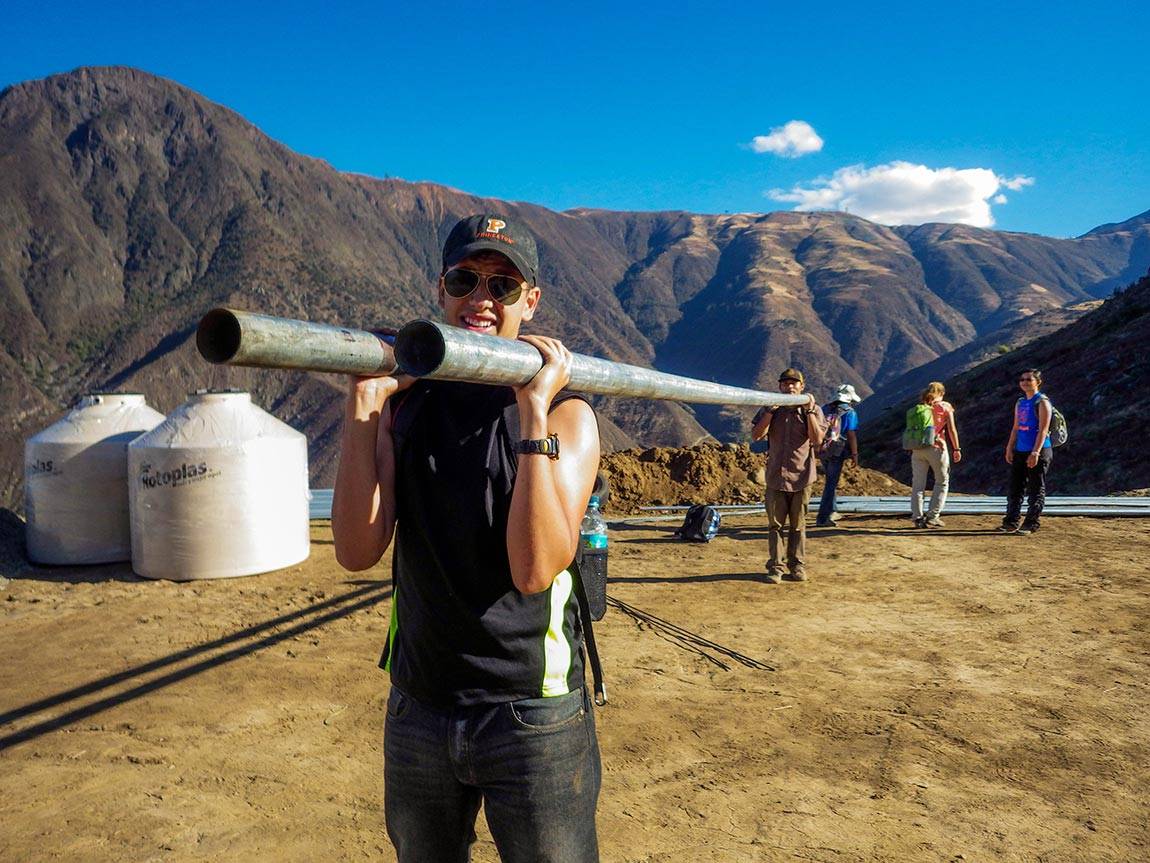 In one EWB project, Will Guiracoche, now a junior, helped carry pipes up a mountain to install a system for delivering fresh water to the town of La Pitajaya in the summer of 2014.

Joshua Knight, a senior engineer at EWB's headquarters in Denver who supervises Princeton's chapter, said that the team has a legacy of persistence, attention to detail and exceptional program success.

"They have a responsibility now as premier chapter to live that out," Knight said, noting that the chapter will likely have access to additional funding given their track record.

Founded in 2004, the Princeton EWB is one of the oldest in the country. After launching their first program in Peru, the organization was approached to help build a library in Ghana and later to create a borehole — a type of well — in Sierra Leone. Although the Sierra Leone project was canceled due to the Ebola outbreak, students shifted their attention to Kenya, where they built two rainwater catchment systems. They also began scouting out locations in the Dominican Republic. 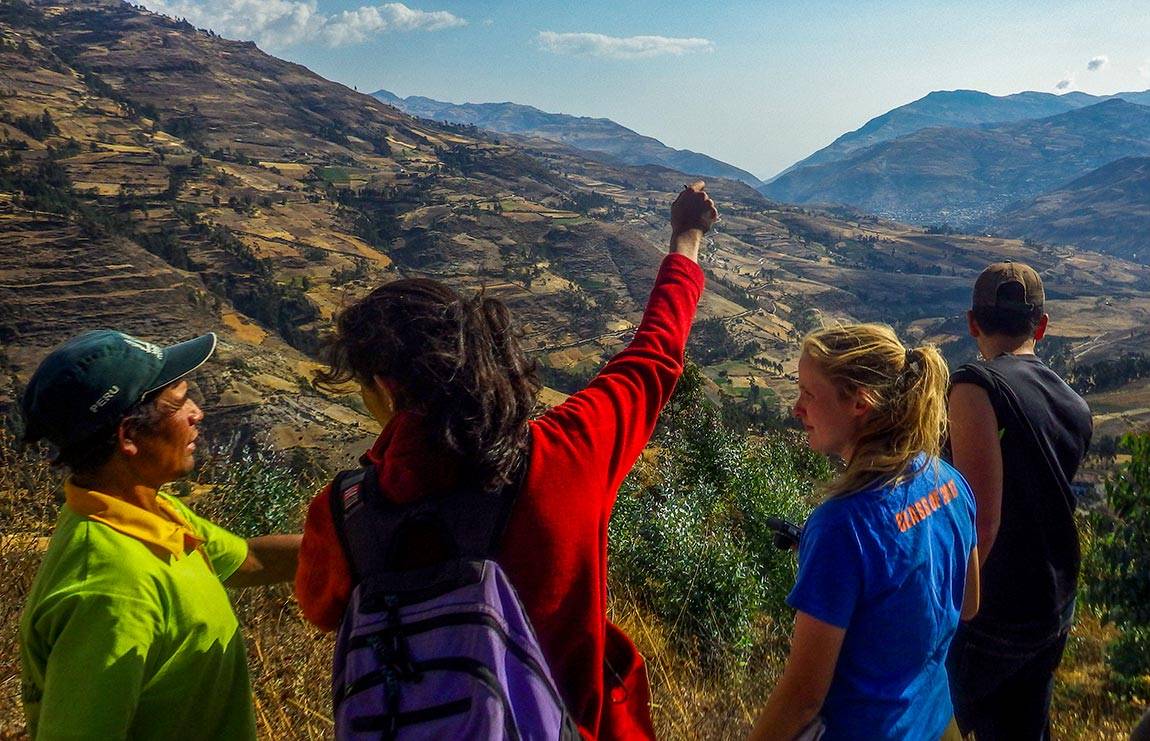 In the summer of 2015, a team of EWB students visited the town of Pusunchás, Peru, to discuss the layout of a potential water system. From left, the president of the Pusunchás Water Committee talks with Kasturi Shah, Class of 2016, and Corrie Kavanaugh and Will Guiracoche, Class of 2017.

Before proposing a project, the project team scopes out communities and conducts surveys to determine their most pressing needs. Students also assess how motivated a community is, since cooperation and local maintenance are key to a successful partnership, Hung said.

Under EWB regulations, communities are expected to contribute 5 percent of the project's cost, in addition to volunteer labor and materials like sand or bricks. All of the system's parts are locally sourced.

"The projects are very carefully documented," Tang said, noting that an official agreement is signed by both parties before the project begins. EWB regulations require a project commitment of at least five years. "We want to make sure that we don't fall into the trap of entering a country and just giving them charity," she added. 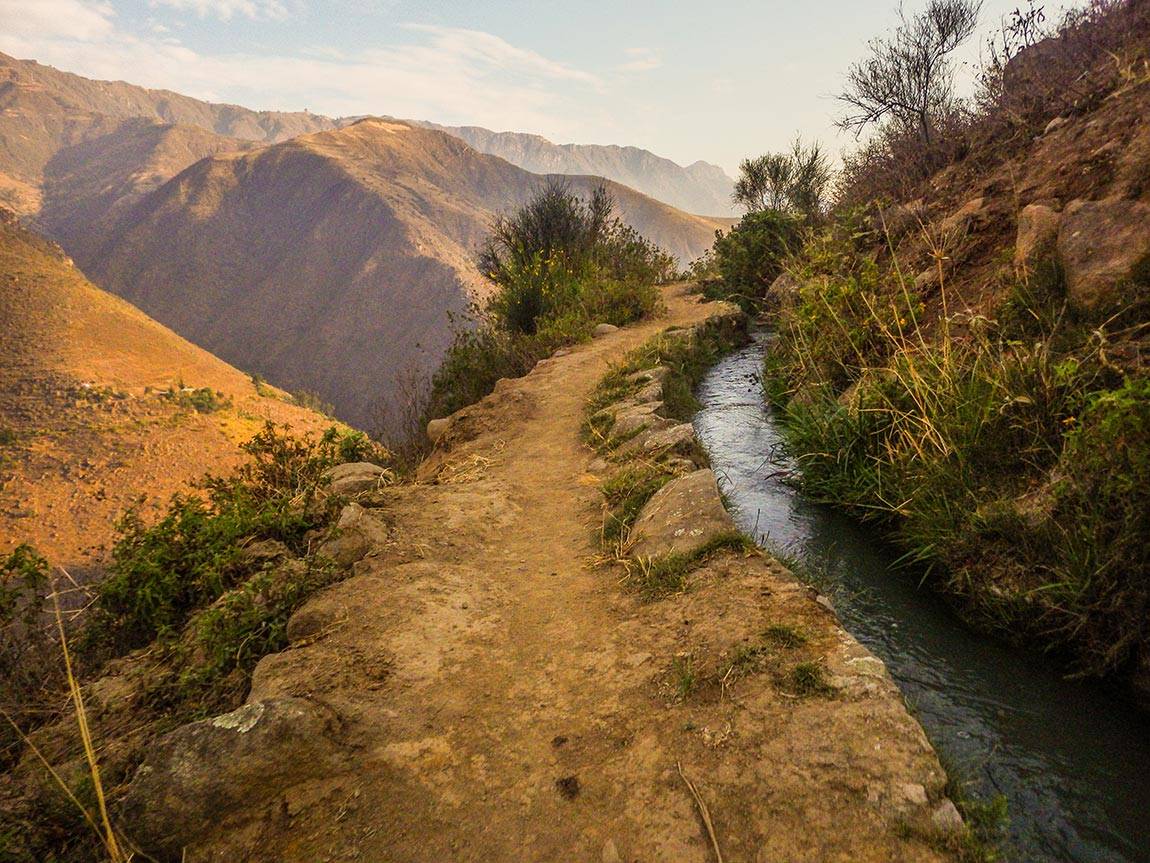 In La Pitajaya, residents had dug a trench to supply water many years ago, but mining in the region had contaminated the canal. The EWB team buried a new pipeline in the thin strip of land between the canal and the cliff.

The team's project plan is repeatedly verified by a professional engineer before it is put into practice, and an adviser from EWB accompanies the students abroad. Each project team is made up of 25 to 30 students from a range of majors. 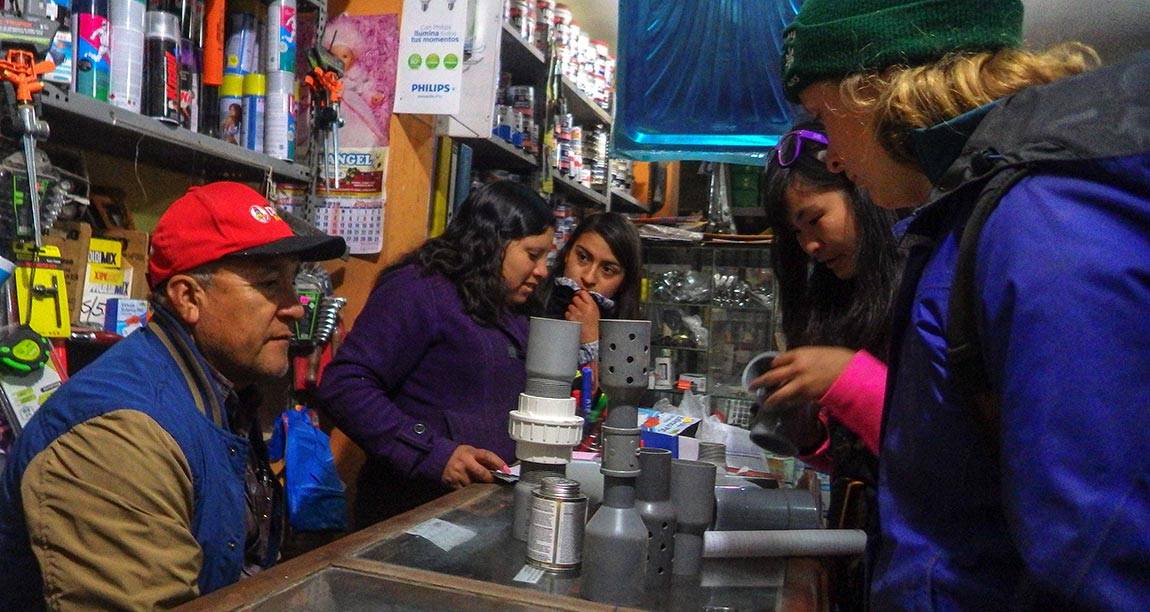 The EWB team uses entirely locally available materials for its projects. Senior Amanda Li of the Class of 2016 (rear right) and Corrie Kavanaugh of the Class of 2017 (foreground right) bought components for a pipeline in the city of Otuzco during their visit to Pusunchás in the summer of 2015.

When Grace Lynch, a sophomore in mechanical and aerospace engineering, traveled to Kenya for her project's assessment trip last year, an elementary school principal in Komosoko said that school children had to walk about 30 minutes to reach the nearest river. As a result, they usually did not have water until after school.

Lynch's team built a rainwater catchment system on top of the school's roof, measuring its slope to make sure that the pipeline system would have enough pressure to function without a pump.

"It's low-tech and fairly common in the area," Lynch said. "We wanted to make sure that people are familiar with the technology and would be able to fix it."

Catchment systems are particularly useful in southwest Kenya because of the region's wet seasons, Lynch said, since water can be collected and redistributed during dry seasons.

The school children were very invested in the project, Lynch said, and it was amazing to see the difference made by better access to drinking water.

"The students were reporting appreciably fewer headaches during the day," Lynch said. "They weren't dehydrated anymore." 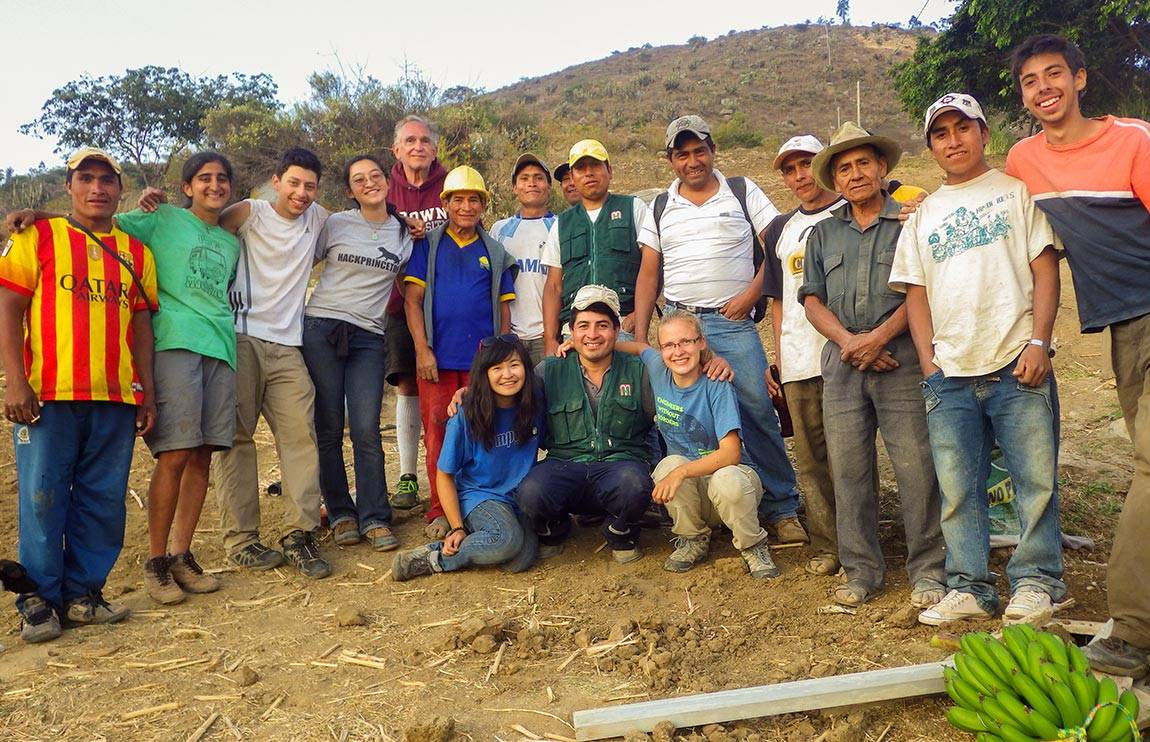 Students and their technical mentor from EWB, Nol Perreira (fifth from left at back), joined community members and masons to celebrate the completion of a second water system for La Pitajaya in the summer of 2014.

Corinne Lowe, a junior in chemical and biological engineering, is managing the chapter's newest project in the Dominican Republic, where students hope to expand a water distribution system that was built when the community was half its current size.

"Lots of households have no water at all or just every few hours," Lowe said. "Residents often need to seek water elsewhere, and it's not always clean."

The team plans on building another aqueduct and a water tank to increase the water supply, in addition to troubleshooting the current distribution system. Lowe said she was amazed by the community's proactive attitude during their assessment trip last summer, as residents mobilized to share the water they had.

"It's a phenomenal community," Lowe said. "This is a partnership. It isn't us coming in as affluent Westerners."

The organization strives to educate students about the value of sustainability, Tang said. It also hosts a project called Sustainable Engineering and Development Scholars (SEADS), where students are invited to dinners with leading figures and researchers in sustainable development.

Tang was inspired to join EWB after becoming a SEADS scholar, and was fascinated by a professor's discussion of plastic waste as fortifying material in bricks. 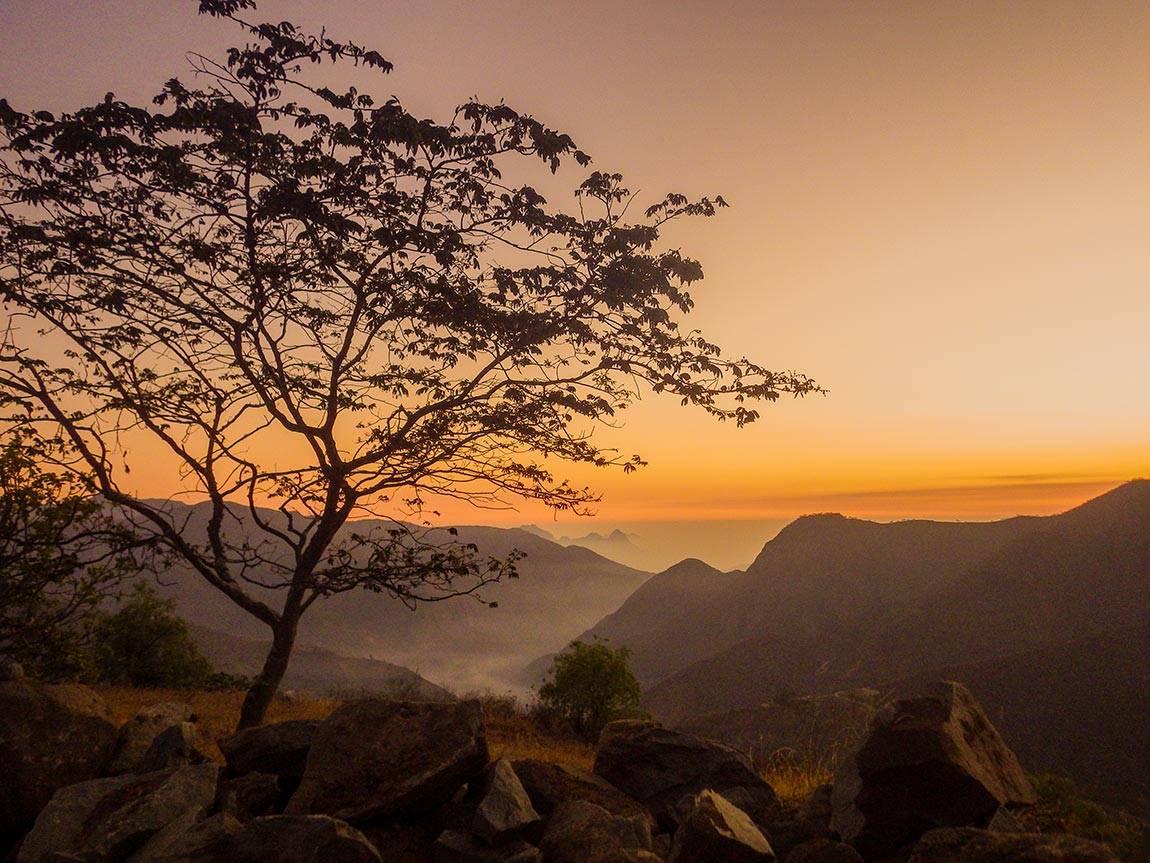 The group recently started a project in Pusunchás, where the view to the east overlooks the foothills of the northern Peruvian Andes toward the Pacific coast.

Hung, who has travelled to Kenya three times with EWB, said that his involvement with local communities has challenged him to ask the right questions, adjust design plans and always think about a sustainable future.

For Umansky-Castro, and his team in Peru, one of the largest challenges will be adjusting the pipeline for altitude differences, because the water will descend 2,300 feet (700 meters) during the nine-mile (15- kilometer) trip from the springs to the town. They plan on overcoming this obstacle with pressure breaks that collect water and re-expose it to atmospheric pressure, thus preventing the pipes from breaking under strain.

Although the project is on a much larger scale than ever before, Umansky-Castro said he is confident that the knowledge passed on from former EWB generations will help his team come through.

"EWB has redefined my perception of what college students are capable of," Umansky-Castro said.

In 2014, a Princeton Engineers Without Borders team assessed and implemented a rainwater catchment system at Muchebe Primary School located in Muchebe, Kuria District, Kenya. (Video by Jessica Luo, Class of 2015)