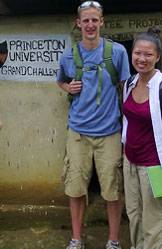 In the summer of 2012, four Princeton students traveled to Koidu, Sierra Leone, looking for a community to partner with for a new Engineers Without Borders project. Senior Michael Showak and junior Christine Feng acted as project co-managers.

Dorma is a small village in the heart of the Kono District of Sierra Leone, which was ravaged by the country's civil war that concluded in 2002. It lies about two miles from the center of Koidu, the district capital, and is surrounded by rice fields where many of its residents farm.

A group of four students working with the Princeton chapter of Engineers Without Borders (EWB-Princeton) were in Sierra Leone last summer to talk with local citizens and leaders about opening a new program. In this video EWB-Princeton participants talk about their partnership with the village of Dorma to address a few of the basic needs of the community. The students noted that the village has seen little continual effort for a redevelopment of infrastructure in the postwar decade.

"The community lacks infrastructure that we would view as essential — clean water and basic sanitation — not from a lack of interest, but from a lack of resources and opportunity," said senior Michael Showak, a chemical and biological engineering major who served as project manager of EWB-Princeton's Sierra Leone team. "We're hoping to be able to work with them to offer our knowledge and engineering skills to assist them to reach the goals they have for themselves."

The program will work to improve quality of life in the community. Most pressing is the need for clean and consistent drinking water. To access water during the dry season, when wells often run dry, residents dig pits in the swamps where they grow their rice. Even when the well produces water, it is highly unsafe to drink.

"During our visit, we tested the well water they drink for contaminants and found high levels of bacterial contaminants — something that would never pass WHO [World Health Organization] water quality standards," commented junior Christine Feng, an operations research and financial engineering major. 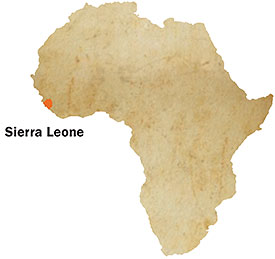 Showak, who led the project along with Feng, said that the team consisting of about 20 Princeton students and a professional mentor has a number of challenges to address as they begin to design the system. Students are working on designs of wells that are operational all year long and eliminate contamination issues. The group plans to return in August to finalize technical measurements and help with the formation and training of a group of community members who will oversee the project.

"Working on an engineering project halfway around the world is a large undertaking," Showak said. "Luckily, we have great partners within Dorma who are eager to make the partnership work."

The Princeton chapter of Engineers Without Borders was established by two undergraduates in 2004 and has completed projects including a library in Ghana and a sanitation system in Peru. Although many of its 90 members are engineering majors, the chapter draws students from across the University. It is supported by the School of Engineering and Applied Science, Keller Center for Innovation in Engineering Education, Princeton Environmental Institute, Grand Challenges Program and Princeton Institute for International and Regional Studies.