Yueh-Lin (Lynn) Loo, the Theodora D. '78 and William H. Walton III '74 Professor in Engineering and professor of chemical and biological engineering at Princeton University, has been appointed director of the Andlinger Center for Energy and the Environment, effective July 1. Loo ends her term as acting vice dean of the School of Engineering and Applied Science and she succeeds founding director Emily Carter, who has been appointed dean of engineering.

"Emily Carter has done tremendous work building the Andlinger Center and leading what is already proving to be a high-impact set of initiatives," said H. Vincent Poor, dean of engineering. "I am very excited that Lynn is taking on the leadership of the center and she will build on that momentum. Her vision for leveraging the broad strengths of Princeton University and partners beyond the University is just what we need to make progress on these critical issues of energy and the environment." 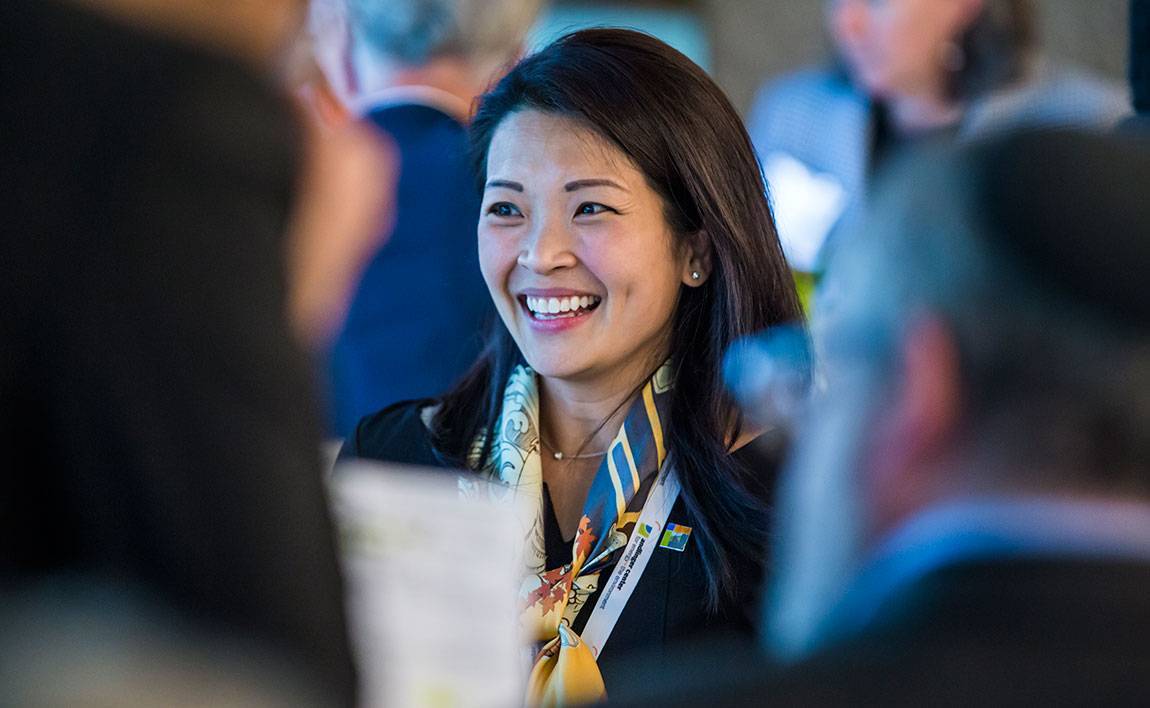 Professor Lynn Loo participates in a symposium held May 18 to 20 to mark the opening of the new building for the Andlinger Center for Energy and the Environment at Princeton University. Loo will become the center's director effective July 1. (Photo by David Kelly Crow for the Office of Engineering Communications)

"Lynn Loo brings a terrific record of research, vision and leadership to the Andlinger Center," said Princeton Provost David S. Lee. "The center has already achieved tremendous momentum under Emily Carter's direction, and I know that Lynn will build quickly on advancing the center's pressing mission to provide energy and environmental solutions that serve humanity and protect our planet."

A leader in organic and plastic electronics, Loo researches the development and processing of materials for low-cost, lightweight and flexible solar cells and circuits. In recent work, Loo's group has developed transparent solar cells to power technology that changes a material's color in response to electrical signals. Such "smart" windows will decrease energy use associated with the heating, cooling and lighting needs of buildings.

The Andlinger Center, founded in 2008, supports research, education, corporate partnerships and outreach aimed at integrating the scientific, technological and policy advances needed to solve problems of energy and the environment. The Andlinger Center is home to seven faculty members who are jointly appointed with a range of academic departments at Princeton and runs a program to fund innovative research that would be difficult to start through conventional funding mechanisms. The center administers two undergraduate certificate programs, a speaker series and internship programs, and has launched a series of technology briefings aimed at policymakers and interested citizenry.

The center recently moved into a major new building that combines state-of-the-art labs with classroom and meeting spaces. To celebrate the new building, the center held a three-day symposium May 18 to 20 that brings together top government officials, energy and environment researchers, and business leaders.

In an earlier role as associate director of external partnerships at the center, Loo launched and led the Princeton E-ffiliates Partnership, a program that enables transformational innovation through collaboration between academic researchers and industry leaders. In taking on the overall leadership of the center, Loo said she intends to continue and to broaden her focus on collaboration.

"I want to leverage the Andlinger Center's momentum to build bridges with even more academic units across campus and with peer institutions nationally and internationally," Loo said. "I would also like to expand the center's collaboration with government, industry and NGOs [non-governmental organizations]. With multiple stakeholders around the table, we will together produce energy and environmental solutions to ensure a sustainable future for our planet."

"Lynn was the first to join my faculty leadership team, since the early days of the Andlinger Center," Carter said. "She will hit the ground running, with her extensive knowledge of the center's mission, goals and activities. As someone who has built her own world-class research program and deeply understands the power of multidisciplinary partnerships to solve critical societal problems, Lynn is superbly positioned to take the center to the next level and expand our impact nationally and internationally."

Among numerous honors recognizing her work, Loo has been awarded the John H. Dillon Medal and elected a fellow by the American Physical Society. She has received the Alan P. Colburn Award from the American Institute of Chemical Engineers and has received the Beckman and Sloan fellowships. As one of two scientists representing the United States at the 2010 Summer Davos Meeting, she introduced plastic electronics and organic solar cells to government officials and business leaders. Loo has been chosen as a Young Global Leader of the World Economic Forum.