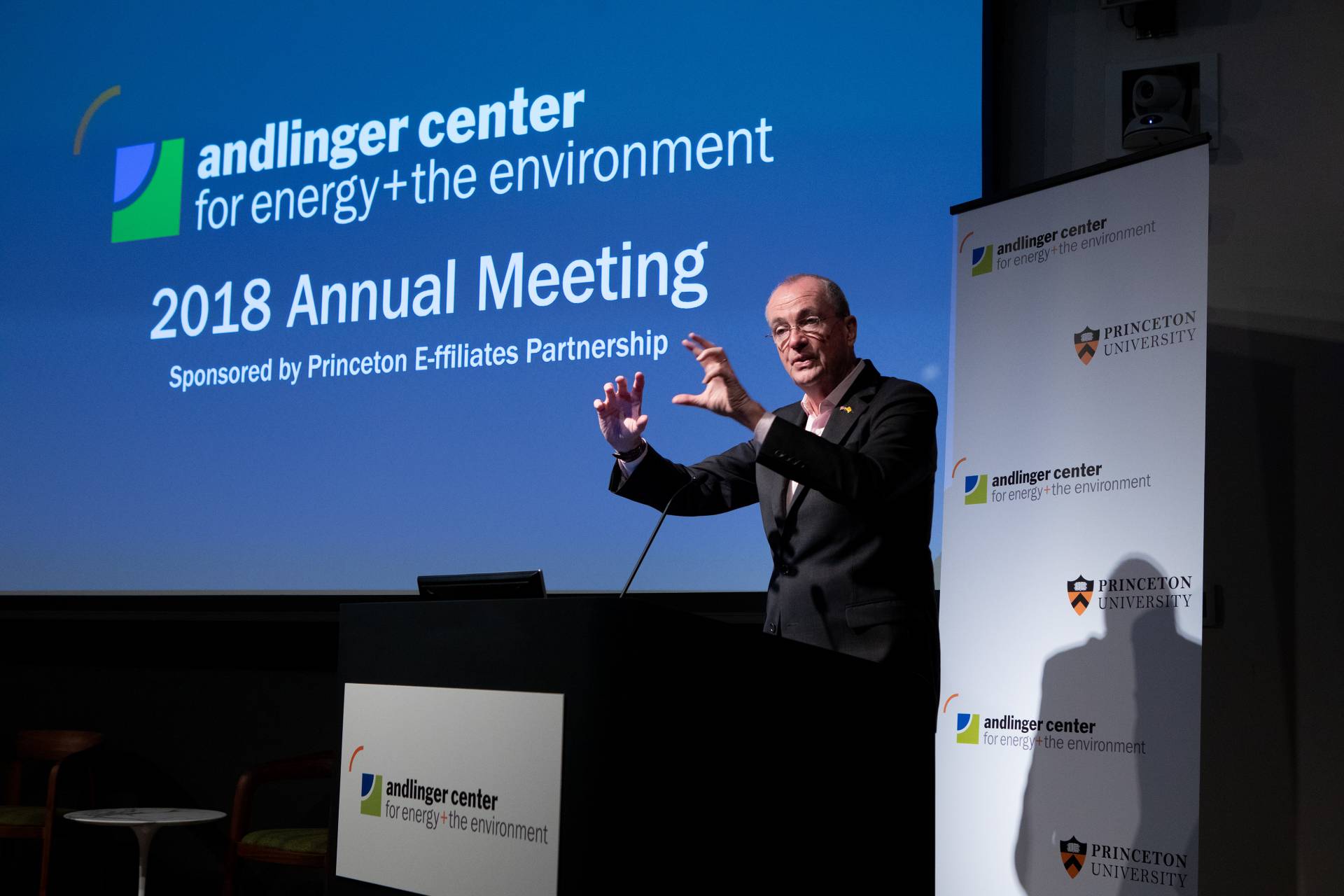 Gov. Phil Murphy of New Jersey stresses that innovation is key to improving the state’s economy and safeguarding its environment. Murphy gave the keynote address Nov. 9 at the annual meeting of the Andlinger Center for Energy and the Environment at Princeton University.

Declaring clean energy central to New Jersey’s economic future, Gov. Phil Murphy addressed a gathering at Princeton University this morning and sketched his plan to bring a range of new technologies to the state.

“We are committed to not just making New Jersey a state that runs on clean energy, but the place where vital research and development, and even the manufacturing of component parts, happens,” Murphy said.

He cited the planned expansion of energy storage and community solar power, increased energy efficiency measures for the state’s utilities, and plans to approve enough wind energy to power 1.5 million homes and businesses by 2030. “But, more universally, we want to make New Jersey the home base for any innovative company in particular, obviously, in the energy sector.” 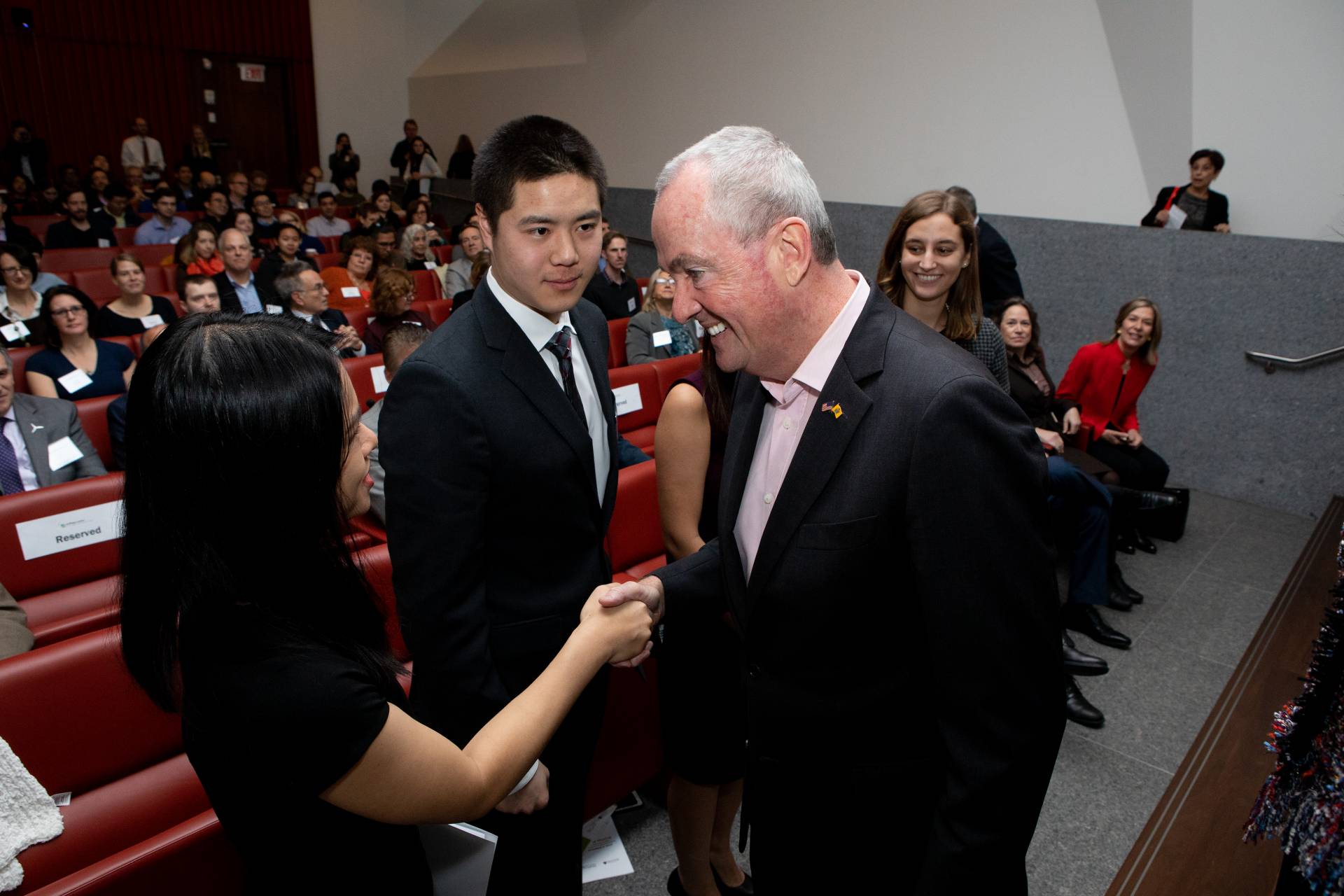 Murphy delivered the keynote address at this year’s annual meeting of Princeton’s Andlinger Center for Energy and the Environment. The full-day meeting Nov. 9 featured panel discussions on clean energy development and opportunities for industry-academic partnerships to help society transition to sustainable energy systems. Subjects included the development of wind energy, sustainable cements and low-carbon hydrogen production. The seventh annual meeting was sponsored by the Princeton E-ffiliates Partnership, a  program that engages corporations to collaborate with academic experts to advance research and help move technology into the marketplace.

The governor was introduced by Yueh-Lin (Lynn) Loo, the Andlinger Center director, who said the center would provide its full effort to help develop and promote clean energy in New Jersey and beyond. 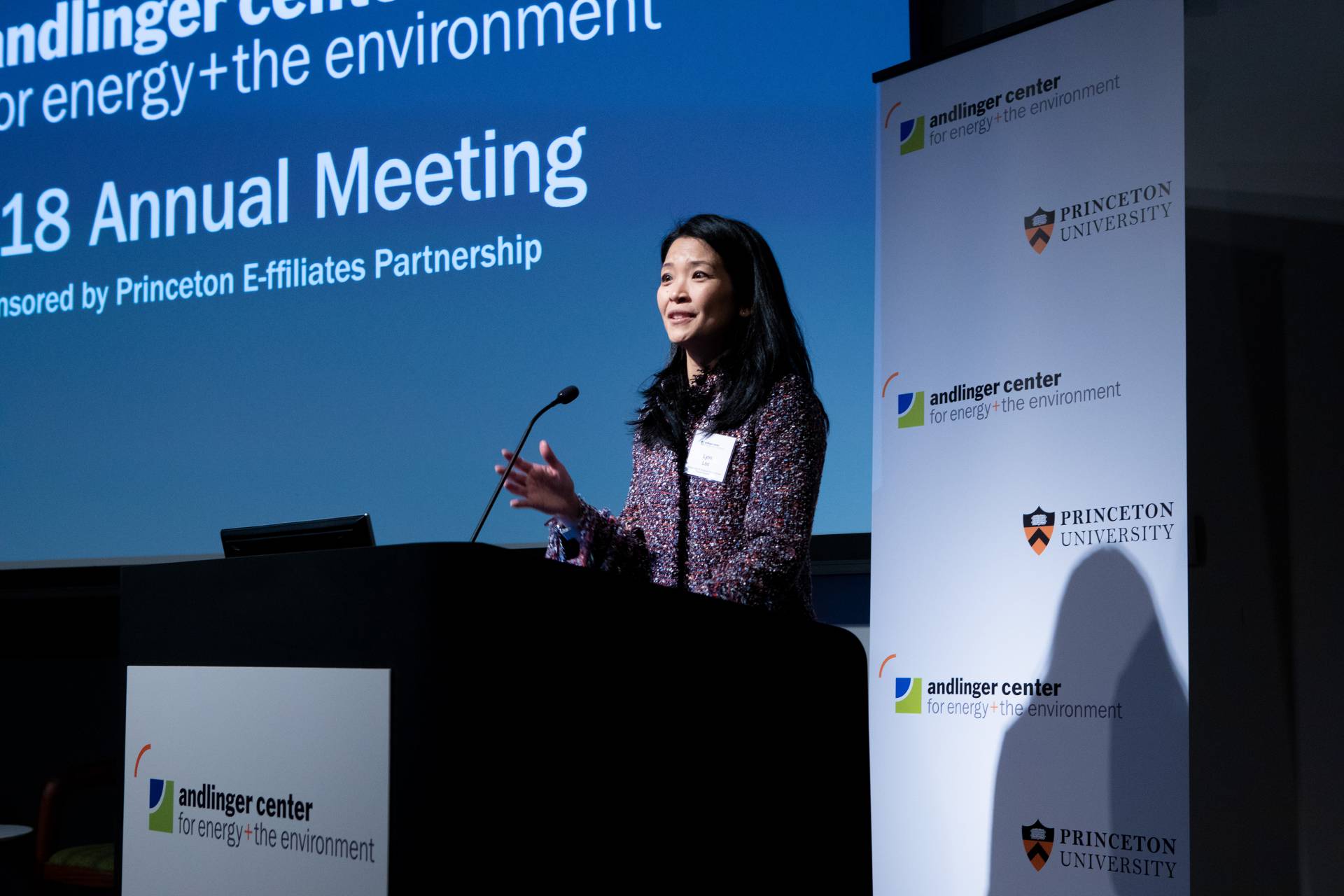 Yueh-Lin (Lynn) Loo, director of the Andlinger Center and the Theodora D. '78 and William H. Walton III '74 Professor in Engineering, introduces Murphy and kicks off the conference.

Transforming New Jersey will be challenging, but neither impossible nor unprecedented, Murphy said. It was first in business and later while serving as ambassador to Germany from 2009 to 2013, Murphy said, that he witnessed firsthand how a country can transition to run on clean energy.

“I had the ability to watch how an advanced, G-7 economy could grow and aspire to be increasingly powered by low-carbon, or zero-carbon energy technologies,” he said. “And, it made me question why we couldn’t do that here — not just in the United States, but right here in New Jersey.”

Murphy said the goal is attainable, but will require “comprehensive, research-based and fact-based solutions.” He said that cracking the challenges involved in changing the energy system would create tremendous opportunities for the state. Universities and research centers will play a critical role in finding those solutions.

“It’s meetings like this where ideas can be pulled from the air and shaped into real-world solutions, where challenges are identified and then they are answered,” he said. “That’s been Princeton’s MO for a long time. This is not just an internationally renowned center for learning, it’s also an internationally renowned leader in innovative research and development, from the work by the researchers here at the Andlinger Center, to the Princeton Plasma Physics Laboratory, to the new discoveries that will be found at the new Princeton Innovation Center BioLabs incubator.”

Murphy said that the innovation economy has had a long history in New Jersey from Thomas Edison to Bell Labs, and that it is time for it to be reborn, with the clean energy sector playing a key role.  He noted that Gerhard Andlinger, the center’s founding supporter, said that developing methods to deliver clean energy not only would solve humanity’s greatest problem but would also “provide an enormous opportunity for American business to be in the front row.” 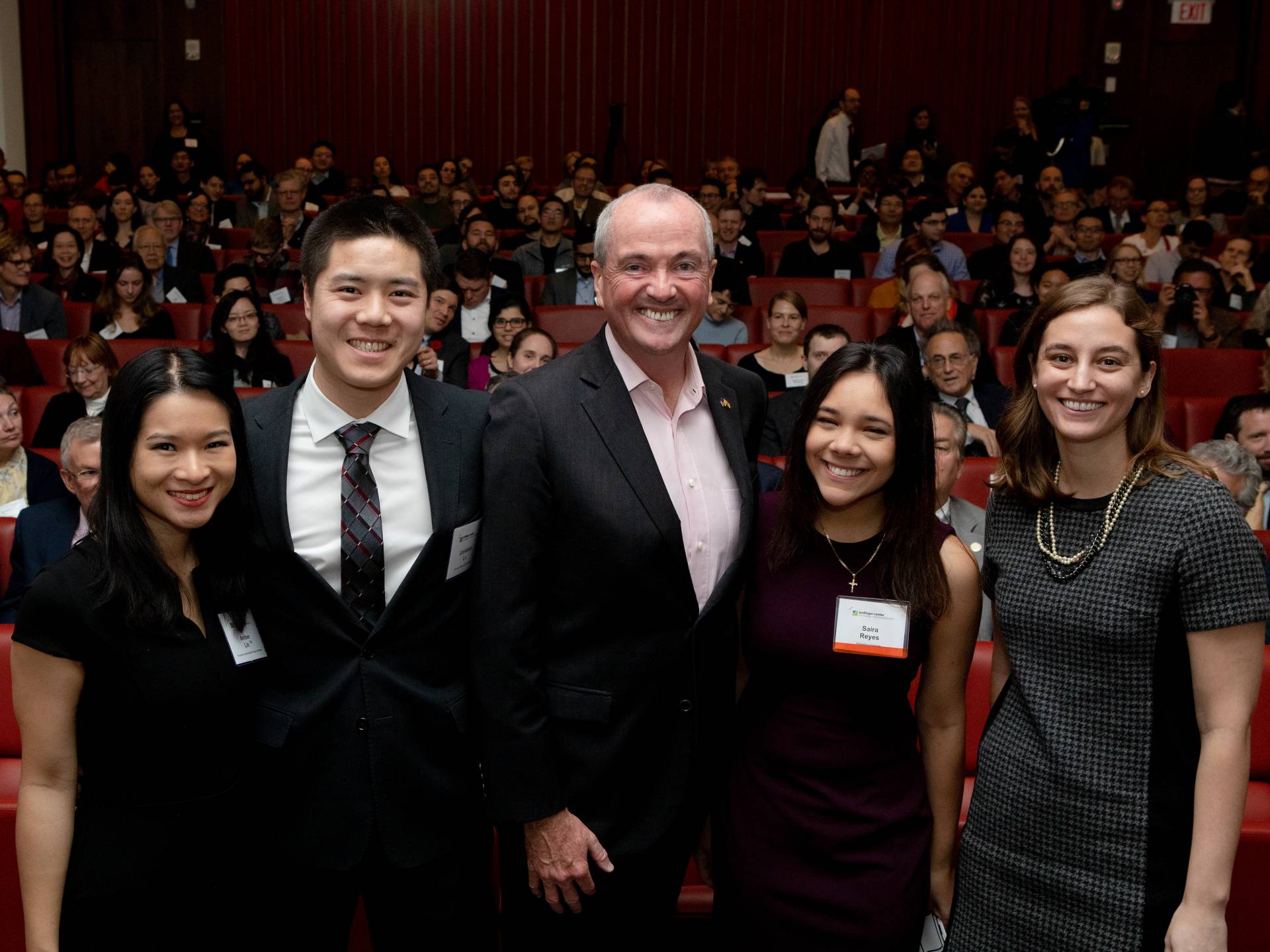 As part of that effort, Murphy said his administration has proposed a slate of research initiatives and incentives to move the state forward. He cited the New Jersey Wind Institute, which is designed to bring together groups to support research for wind technology and training for workers in the industry. The proposed Innovation Evergreen Fund would pair state resources and private capital to fund ventures developing new businesses “at the cutting-edge of technological advancement,” he said. Murphy said the new fund would provide $100 million annually in public and private funds for new business development.

Murphy closed by challenging the audience to not only think of new energy solutions, but also ways that New Jersey can play a role in delivering those solutions. He said the state is ready to do its part.

“We can do that in New Jersey,” he said. “We have everything you need right here.” 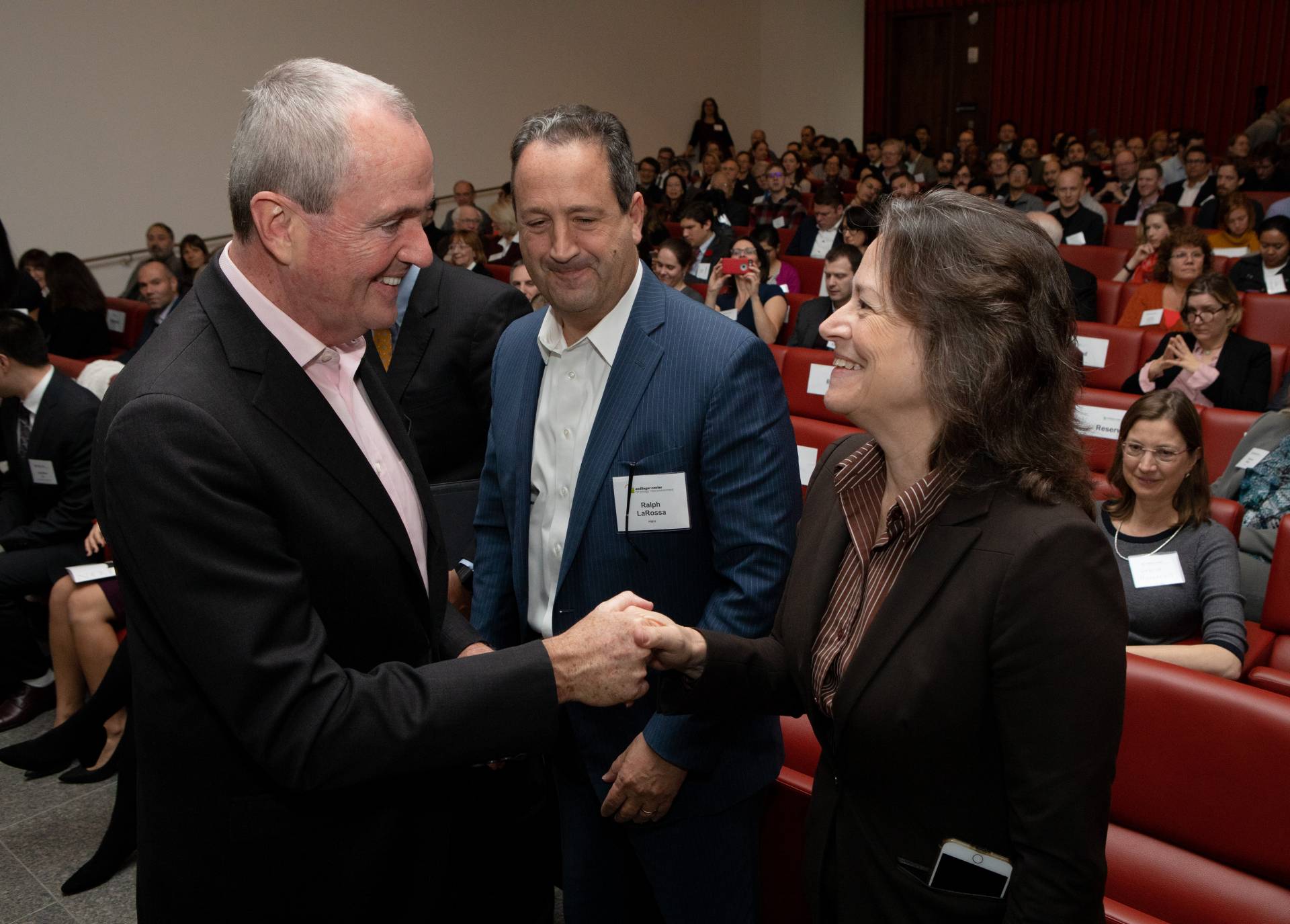 From left: Murphy; Ralph LaRossa, president and CEO of PSEG Power; and Emily Carter, dean of the School of Engineering and Applied Science, talk at the conference.