by Steven Schultz, School of Engineering and Applied Science Communications 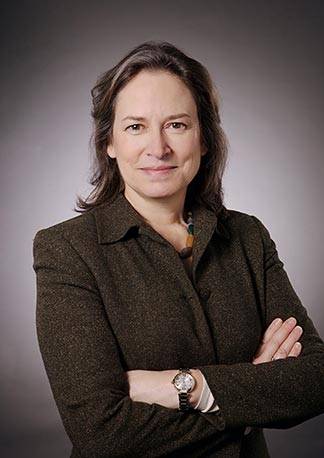 Emily A. Carter, a Princeton faculty member since 2004 and founding director of the University's Andlinger Center for Energy and the Environment, has been selected as the next dean of the School of Engineering and Applied Science. Her appointment is effective July 1.

Carter is the Gerhard R. Andlinger Professor in Energy and the Environment and a professor of mechanical and aerospace engineering and applied and computational mathematics. She has earned wide recognition for fundamental research contributions as well as for her vision for harnessing science and policy to produce lasting solutions to societal problems, including those of energy and the environment.

"I'm delighted that Professor Emily Carter has agreed to become the next dean of the School of Engineering and Applied Science," President Christopher L. Eisgruber said. "She is a brilliant scholar, a capable and proven administrator, and a dynamic champion for engineering at Princeton. Emily's vision and leadership will make her a superb dean at a time when the University is planning major investments in its engineering school."

Carter succeeds H. Vincent Poor, the Michael Henry Strater Professor of Electrical Engineering, who has served as dean since 2006 and will return to full-time teaching and research.

Carter's own research spans the fields of chemistry, physics, applied mathematics and engineering and has included creating quantum mechanical tools for understanding and analyzing the behaviors of large numbers of atoms and electrons in materials. This highly influential work led in recent years to Carter's research on creating effective fuel cells, using sunlight to generate electricity and make liquid fuels from carbon dioxide and water, and investigating lightweight metal alloys for vehicles and fusion reactor walls.

As director of the Andlinger Center since 2010, Carter led a critical period of growth culminating with the planned May 18 dedication of the new Andlinger Center for Energy and the Environment building. Created in 2008 and named in recognition of a $100 million gift from 1952 alumnus Gerhard Andlinger, the center combines science and engineering with public policy and architecture to create solutions to problems of energy and the environment.

Carter has overseen the hiring of the center's staff along with six faculty members who were jointly appointed with a range of academic departments, the creation of a corporate affiliates program, the start of an undergraduate certificate program, the launch of a series of technology briefings aimed at policymakers and interested citizenry, as well as initiatives in research innovation funding, a speaker series and internship programs.

"I am immensely grateful to my colleagues and the University administration for their faith in me to lead the already world-class School of Engineering and Applied Science to new heights," said Carter. "I am excited to foster new fields of research central to 21st-century society, to educate students of all backgrounds as to the wonderful creativity and societal impact associated with being an engineer, and to enhance the school's partnerships across the campus and beyond. Having spent the last six years building the Andlinger Center — from its people to its activities to bricks and mortar — I intend to bring the same collaborative philosophy to Princeton engineering as a whole."

Provost David S. Lee said he is eager to work with Carter in her new capacity. "Her intellect as a distinguished scientist and her proven experience as an administrator will be crucial to the ongoing strategic thinking about investments in the engineering school in the coming years," Lee said. "At the same time, as she has been for the Andlinger Center, Professor Carter will be an outstanding representative for the University, advocating for how Princeton engineering, through its teaching and research mission, can contribute to the world and address societal problems of the 21st century."

Among her many honors, Carter was elected in 2008 to the National Academy of Sciences and the American Academy of Arts and Sciences and was elected this year to the National Academy of Engineering. She has written more than 300 scientific publications and delivered 500 invited and plenary lectures worldwide. Among her most cited works are her pioneering advances in "orbital-free density functional theory," which allow the study of the quantum mechanical interactions of a large number of atoms in a way that was previously impossible. Such work is critical in developing new materials and relating the atomic-level structure of materials with their large-scale performance.

Based in the Department of Mechanical and Aerospace Engineering, Carter built a research group that includes many disciplines. Graduate students and postdoctoral researchers on her team have had backgrounds in chemistry, applied mathematics, physics, mechanical engineering, chemical engineering and electrical engineering.

"The most challenging problems society faces are thorny, complex and large, which no single expert will solve on his or her own," Carter said. "Both in my own research activities and in the Andlinger Center, I've sought to catalyze interdisciplinary teamwork as I firmly believe that is how many if not most future breakthroughs will occur. But disciplinary cores must be strongly supported as well. At Princeton, we do both. I don't say lightly that Princeton is — bar none — the best place I have ever seen at fostering interdisciplinary work, at every level. It is a major reason for our outsized impact in the world."

The School of Engineering and Applied Science at Princeton, founded in 1921, emphasizes the discovery and application of fundamental scientific principles as well as interdisciplinary and entrepreneurial collaborations that foster lasting benefits for society. As an integrated and vital part of a liberal arts university, the school prepares leaders who make wise use of technology and further advance science and technology for the benefit of society.