Investigators eager to uncover the genetic basis of autism could now have hundreds of promising new leads thanks to a study by Princeton University and Simons Foundation researchers.

In the first effort of its kind, the research team developed a machine-learning program that scoured the whole human genome to predict which genes may contribute to autism spectrum disorder (ASD). The results of the program's analyses — a rogue's gallery of 2,500 candidate genes — vastly expand on the 65 autism-risk genes currently known. Researchers have recently estimated that 400 to 1,000 genes underpin the complex neurodevelopmental disorder.

This newest research provides a manageable, "highly enriched" pool from which to pin down the full suite of ASD-related genes, the researchers said. Many of the newly implicated genes have never been studied for their possible roles in ASD. Following up on these leads will help scientists delve deeper into autism's strong yet byzantine genetic basis, as well as possibly lead to new diagnostic and treatment techniques. The paper was published Aug. 1 in the journal Nature Neuroscience and the researchers have made their results available online. 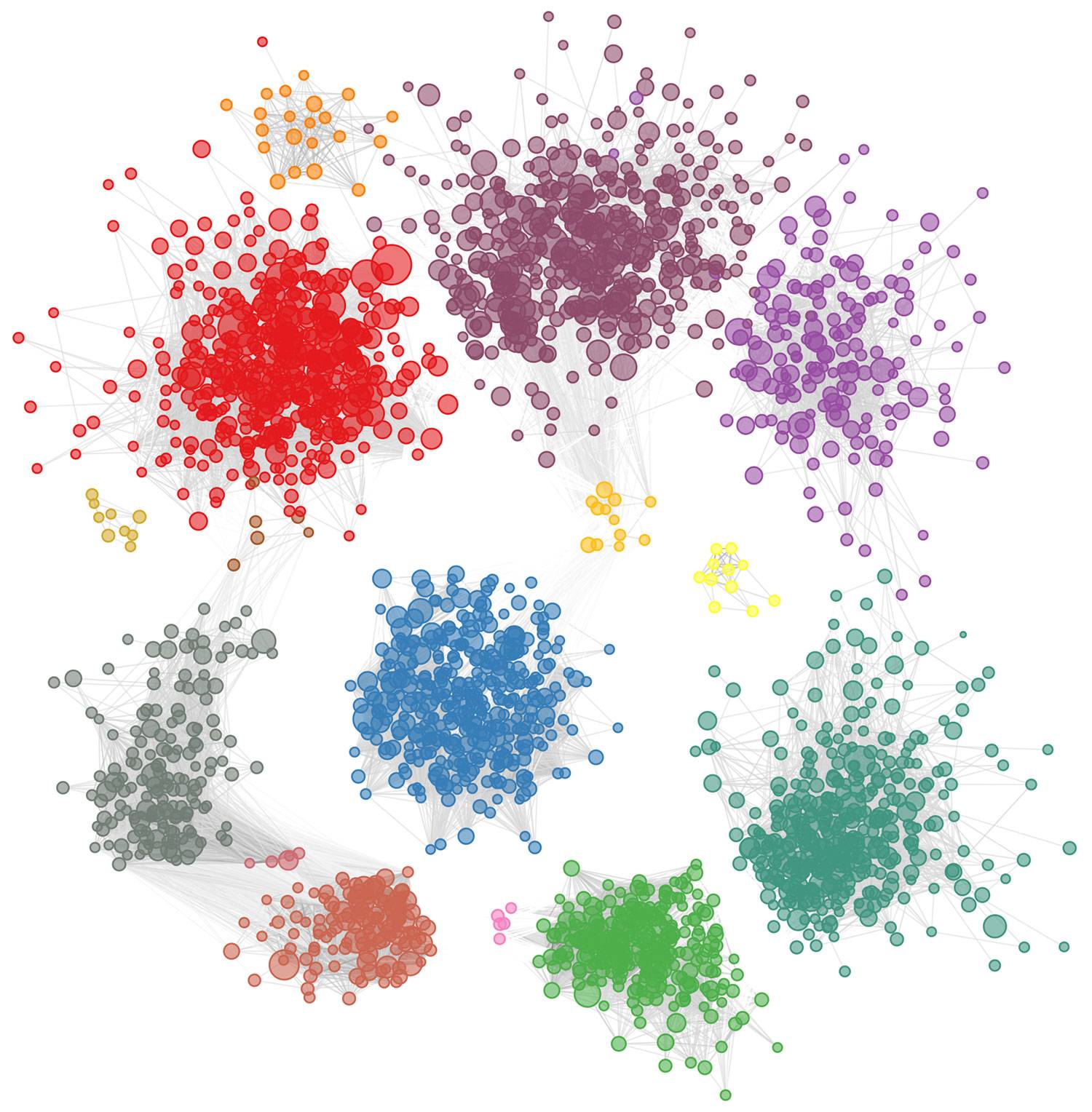 Princeton University researchers developed a machine-learning program that scoured the human genome to identify 2,500 genes that may contribute to autism spectrum disorder. The results vastly expand on the 65 autism-risk genes currently known. In the illustration, genes possibly associated with autism are clustered into colored groups based on how they function and relate to each other in the brain. The size of an individual circle indicates how highly the gene was ranked by the machine-learning program. The clusters also provide researchers clues as to which processes in the brain might be disrupted in autism. (Image courtesy of Olga Troyanskaya, Department of Computer Science)

"The method we developed can, for the first time, identify ASD-associated genes even if they have not been previously linked to autism in genetic studies," said Olga Troyanskaya, senior author of the paper and a Princeton professor of computer science and genomics, as well as deputy director for genomics at the Simons Center for Data Analysis. "It is vitally important that we begin to explore underappreciated aspects of how autism arises and might someday be treated."

Autism has emerged in recent decades as one of the most common developmental disorders.
The disorder, which has no cure, is characterized by difficulties in communicating, learning and socializing. Children often are not diagnosed until they are 3 or 4 years old. However, intervention services, such as physical and behavioral therapy, in a child's first few years have been shown to improve development. Therefore, clinicians are keen on detecting autism as early as possible.

"It is very important that we improve ways to diagnose kids with autism earlier so we can do earlier interventions," Krishnan said. "Furthermore, getting a handle on where, when and how autism spectrum disorders arise during brain development will be absolutely critical for drug and treatment development in the decades ahead."

"This study is elegant, sophisticated and comprehensive," said Daniel Geschwind, director of the Center for Autism Research and Treatment at the University of California-Los Angeles, who is familiar with the study but had no role in it. "It pulls together essentially all of the data out there on using network-based approaches to better understand autism."

The researchers began with a "functional interaction network" of the human brain they had originally constructed little more than a year ago. The network describes how genes in the human genome work together in the brain's molecular circuits. While every cell in the human body contains a complete set of genetic instructions for the whole body, only a portion of these genes are "turned on" in any given cell at any given point in development or everyday life. Mutations to genes — when their orderly coding becomes scrambled — can prevent them from working in concert with other genes, leading to dysfunction and illness.

"We have so many types of cells in our body, and though each cell has the same set of genes, or the same box of tools, each cell type can perform very different activities by wiring these tools in different ways," Krishnan said. "We want to discover and understand the disruptions to the genetic toolkit in the brain of people with autism to learn about its origins."

The brain-specific network the researchers relied on pooled results from thousands of previous experiments, each of them revealing piece-by-piece how genes function together throughout the human body. Next, the team applied their machine-learning program to this network. The program quickly sifted through the entire network of more than 100 million gene interactions to draw out information, learning characteristics that indicate a connection to autism, and honing the quality of returns as they proceeded.

Just as teachers offer students positive and negative feedback, the Princeton and Simons Foundation team trained the machine-learning program on the connectivity patterns of known ASD-associated genes, as well as human disease genes with no association to neurodevelopment. Based on those initial cues, the program then analyzed all 25,825 genes in the human genome, seeking any interaction patterns that resemble those of ASD-related genes.

Encouragingly, within its top 10 percent of ranked predictions — around 2,500 genes — the program correctly identified numerous ASD-associated genes that were different from the known ones initially used to "train" the computer program. More importantly, the program highlighted several brand-new, compelling candidate genes with no prior genetic evidence tying them to autism. "These novel genes for autism risk are great candidates for further study," Krishnan said.

To gain context for their findings, the researchers considered their gene-prediction results alongside a map of gene expression in the developing brain compiled by neuroscientists at the Yale University School of Medicine. A distinct pattern of gene activity and inactivity popped up in babies' brains while in utero. Through the prenatal into the late-fetal stages, altered development occurred broadly across neural regions related to autism by previous studies. These regions include the cerebellum, which coordinates and integrates muscle movement and sensory information, as well as the striatum, which is involved in motivation, planning and decision-making.

"It is quite clear in our findings that the signal for autism is really there in early development," Troyanskaya said. "The signal is regionally diffuse, implying autism is likely a disorder of general brain development, and not just one specific brain region."

A significant portion of the genes with a predicted link to autism have no known function in the brain, Troyanskaya said.

"Although the human genome was mapped early last decade, we still don't know what a majority of human genes do," she said. "Our study underlines the fact that we have a great deal yet to learn about the operation of genes in the brains of neurotypical and autistic people."