During a discussion with Princeton town officials Wednesday, Nov. 9, Princeton University President Christopher L. Eisgruber focused on shared values between town and gown and how leaders can continue to work together to further common goals.

"I was thinking about how much we share between the University and the town," Eisgruber said, noting mutual commitments to civil liberties, civil exchange, respect for all people and the importance of education. "We have to work through tough issues, and, as we have acknowledged in the past, there will be frictions between our University and our town. But [we work] from a common core of values where the University has to be willing to help the town and the town has to be willing to help the University. We did grow up together and we will continue to grow together." 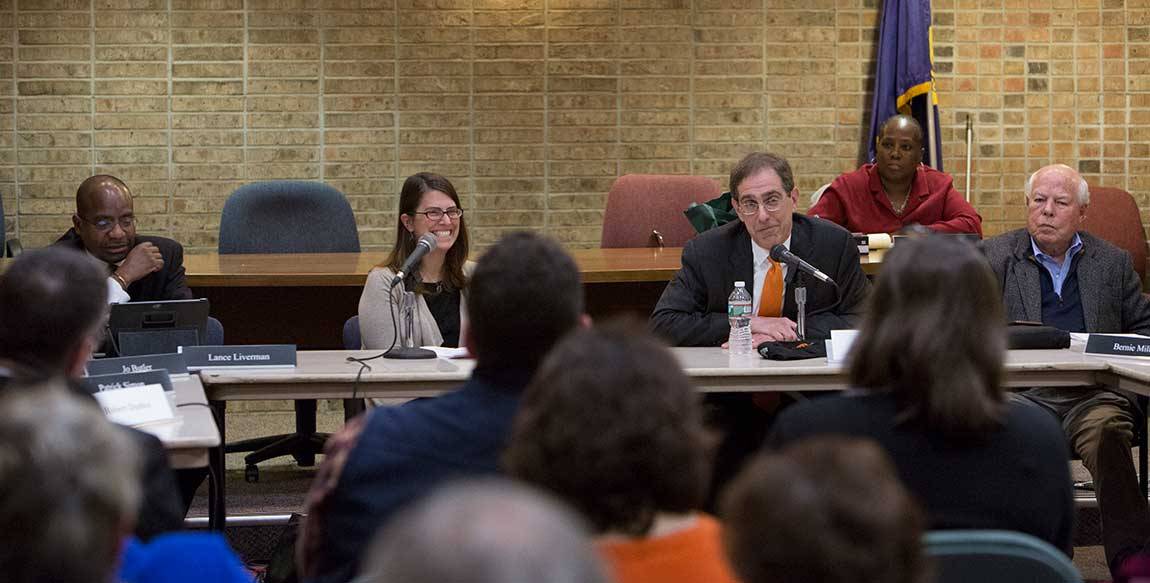 Among the areas of shared interest discussed were: ensuring socioeconomic diversity within the University and the local community; entrepreneurial education initiatives; the University's voluntary contributions and tax payments to the town; the development of the University's next campus plan; efforts to promote pedestrian and bicycling initiatives; and police practices and policies.

In advance of the meeting, the University prepared a summary of various contributions to and partnerships with the town this year, including: a $2.97 million voluntary payment to the town; a $9.12 million property tax payment (making the University the largest taxpayer in Princeton); the creation of 65 new affordable housing units in town available to community members; ongoing contributions to municipal police, fire and emergency services, including $500,000 toward the construction of a new headquarters for the Princeton First Aid and Rescue Squad (PFARS); as well as funding to purchase a new vehicle for the town's FreeB shuttle service and collaborations on other transportation programs such as the Princeton Bike Share program.

On the topic of socioeconomic diversity, Liverman said he was "blown away" after getting to know some Princeton students this summer. "They were the first ones in their families to go to college. They shared how their families had no money and how [attending Princeton] is one of the greatest opportunities they have ever received."

Eisgruber said he's very proud of what Princeton has done to increase "the representation of students from the least well-off families in the country." He noted that 21 percent of the entering class is eligible to receive federal Pell Grants for low-income students — a figure that has tripled during the past 12 years and is one of the highest percentages among the nation's most selective colleges and universities.

"We talk about what the University, in combination with the town, can do to ensure that this remains the kind of diverse community that we are proud Princeton has been over time," Eisgruber said.

He added that the recent University settlement of tax litigation focused on helping lower-income residents pay their property tax bills.

Conversation about other topics included:

• Entrepreneurship. Miller asked how the University's entrepreneurial educational activities could continue to connect with community needs. For example, a team of students in the University's Tiger Challenge program has worked with municipal and community organizations to identify ways to streamline the affordable housing application process in Princeton. Miller wondered about ways to encourage Princeton alumni to base their entrepreneurial ventures in office or research space in town.

Eisgruber said he was open to exploring such ideas, although in alluding to the recent litigation, he added that he would "appreciate the town's support of the basic proposition that these entrepreneurship ventures, and this work to develop an innovation ecosystem around us, is something that is consistent not only with the town's aspirations but with the basic nonprofit mission of Princeton as a research university."

• The University's 2026 campus plan. The plan will establish a framework to guide the evolution of campus under two planning horizons: a 10-year horizon to provide guidance on near-term growth, and a 30-year horizon to establish a broader strategy for development of the campus over a longer period of time.

Residents of Springdale Road attended the meeting to ask about plans for the Springdale golf course land. Eisgruber said that the campus plan is looking at possible future uses of the land to support the University's educational and research mission, but that no changes are planned for the near future and that any planning would take into account the nature of the adjacent neighborhood. "In terms of longer-term options, there are possibilities the University has to keep in mind. But I don't expect to move on the golf course during my time as president," he said.

• Police practices. Members of the council noted efforts over recent years in the Princeton Police Department to eliminate disparate treatment of community members based on racial or other backgrounds, and said municipal officials are committed to transparent police practices. Their comments were in connection with the arrest last February of Princeton professor Imani Perry for traffic offenses, which received national attention. They noted that a county investigation concluded the police had followed established procedures.

Eisgruber expressed appreciation for the town's work and for the constructive cooperation between the town's police department and the University’s Department of Public Safety. He reaffirmed his respect for Princeton Police Chief Nick Sutter and for "the way Princeton [police] officers carry out their duties," but raised questions about New Jersey policies that authorize the issuance of arrest warrants for unpaid parking tickets and about town practices governing the handcuffing of persons arrested pursuant to such warrants. Eisgruber added that he sympathized with Professor Perry's distress and he emphasized that the nation's history and the town's inevitably affect the way that people interpret their encounters with police, adding to the "complexities of the story" even "when we have a good person in Professor Perry and a good town and a good police force."

During the exchange, Howard asked whether the University would, in recognition of the values it shares with the town, be willing to help pay for the cost of body cameras for town police officers. Eisgruber agreed to do so if the town determined that such cameras were desirable.

Lempert concluded the meeting by thanking the University for the many ways it partners with the town to make Princeton a great place to study and live.

"There are a lot of really exciting initiatives the University and town are collaborating on," Lempert said. "Tonight's discussion was probably one of our most vigorous, but it's good we are having this conversation and raising important issues."