by Nick Donnoli, Office of Communications

Editor's note: This article is Part 1 of a two-part series on Princeton's premier performance venue, Alexander Hall. This photo essay focuses on the interior spaces; a second installment features the building's exterior. All photos are by Nick Donnoli, Office of Communications. 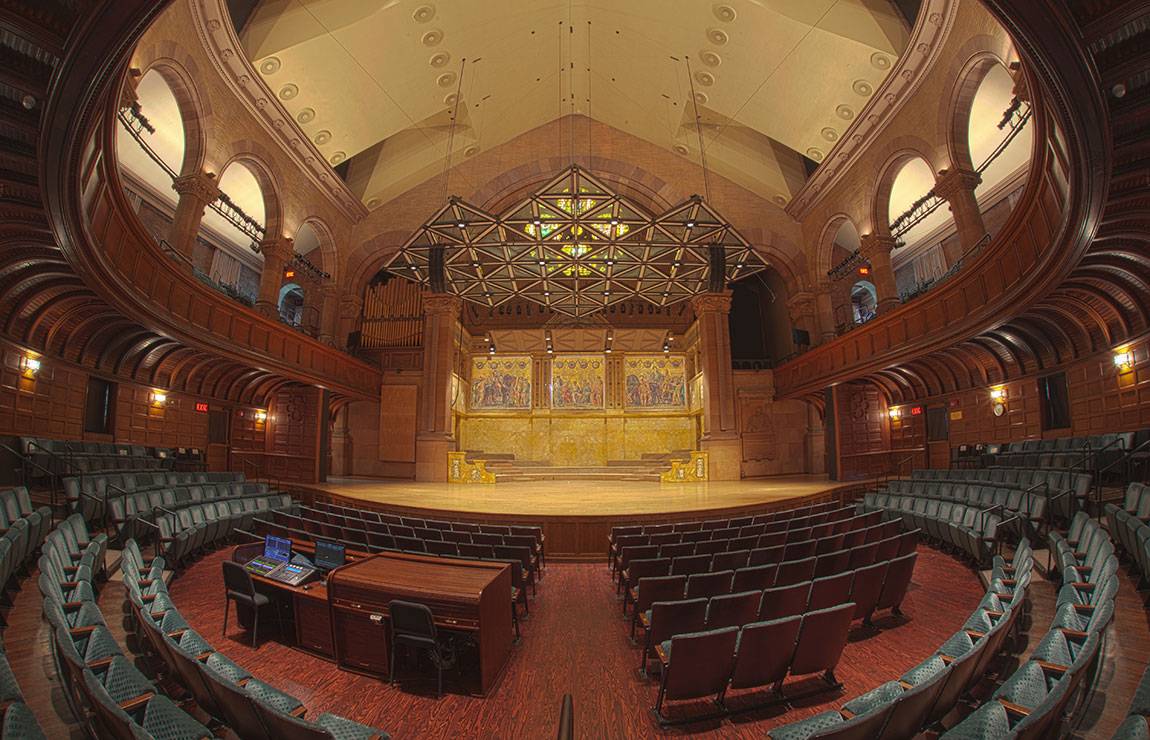 Wander up the steps preceding Blair Arch and you'll be rewarded with an iconic view of Alexander Hall. Many on campus know the building as a beautifully designed performance hall that hosts the Princeton University Orchestra and Princeton University Concerts series, along with events throughout the year, such as Alumni Day lectures, Princeton Preview and Orientation assemblies, performances by student groups and renowned artists like Wynton Marsalis, and talks by world leaders, Supreme Court justices, scholars and artists.

Constructed between 1891 and 1894, Alexander Hall was originally built as a congregation hall for large events, including the annual Commencement ceremony, the first of which was held in the auditorium on June 13, 1894. The building was funded by a gift of $350,000 (roughly $9 million in 2016 dollars) from Harriet Crocker Alexander in honor of her husband, Charles Alexander, Class of 1870, his father Henry Alexander, Class of 1840, and his grandfather Archibald Alexander.

While Alexander Hall has seen many changes in its 122-year existence, the original Richardsonian Romanesqe design developed by architect William A. Potter has remained largely unaltered.

We hope the photos that follow instill a sense of the building's grandeur as they outline the intricacies of the interior and exterior architectural design, as well as the one-of-a-kind artwork that has been integrated into the façade and stage.

A 'Homeric Story' in mosaic form

Though it's occasionally obscured by banners and projector screens at the various events hosted in Richardson Auditorium, the wall behind the stage is home to a unique Tiffany Glass mosaic titled "Homeric Story." Designed by J.A. Holzer, the mosaic depicts scenes from Homer's "The Iliad" and "The Odyssey." Robed in white, Homer is depicted in the center panel. Surrounding him, from right, are Helen, Paris and Mentor and, from left, Telemachus, Penelope, Odysseus and Achilles. The left mosaic panel illustrates the Greeks preparing for war and the right mosaic panel portrays the Trojan warriors awaiting the call to battle. 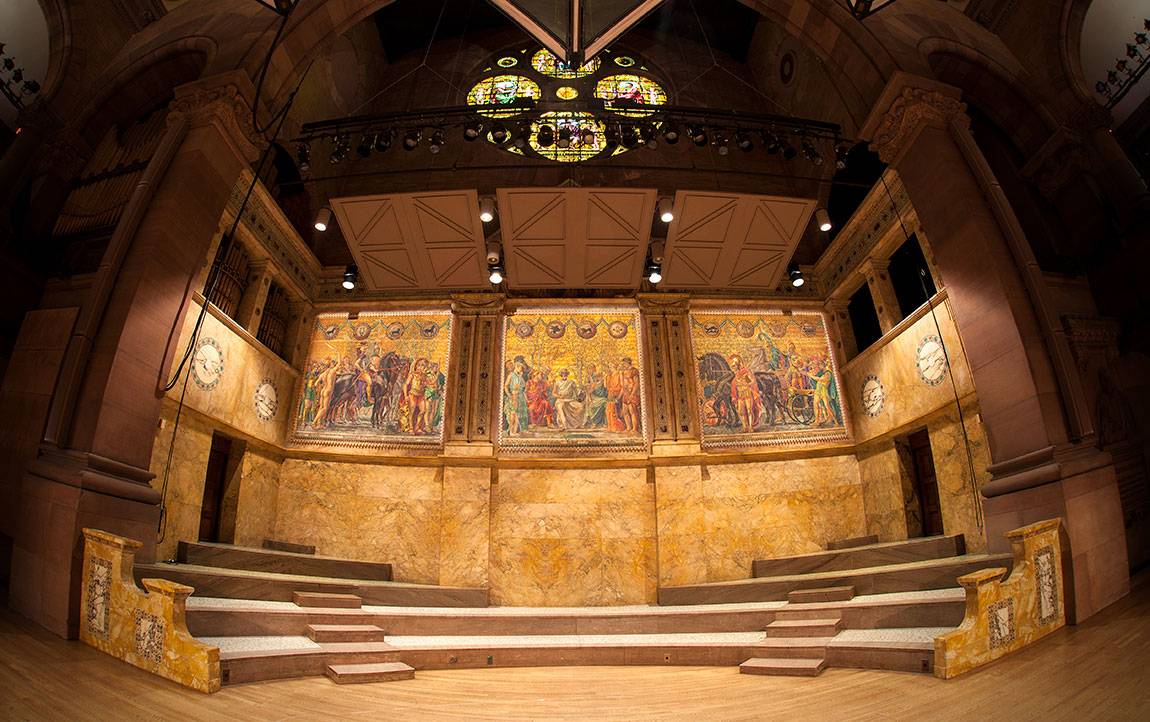 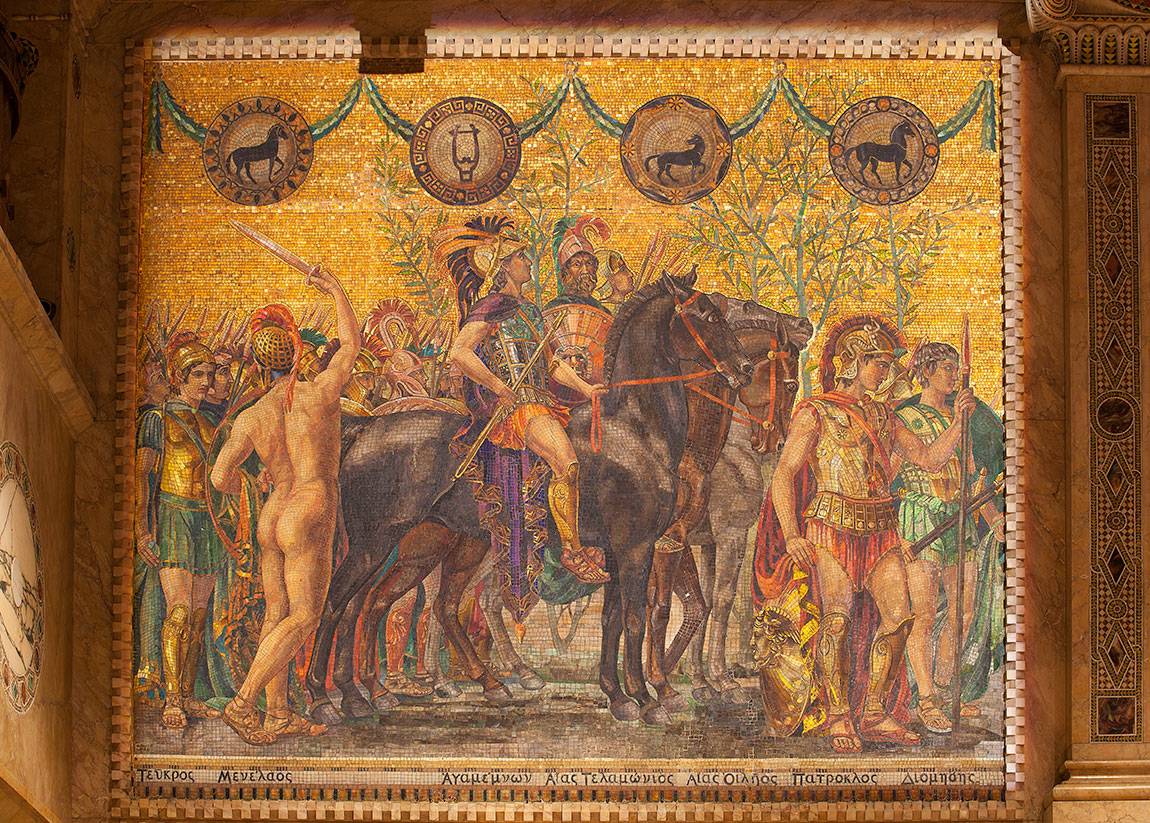 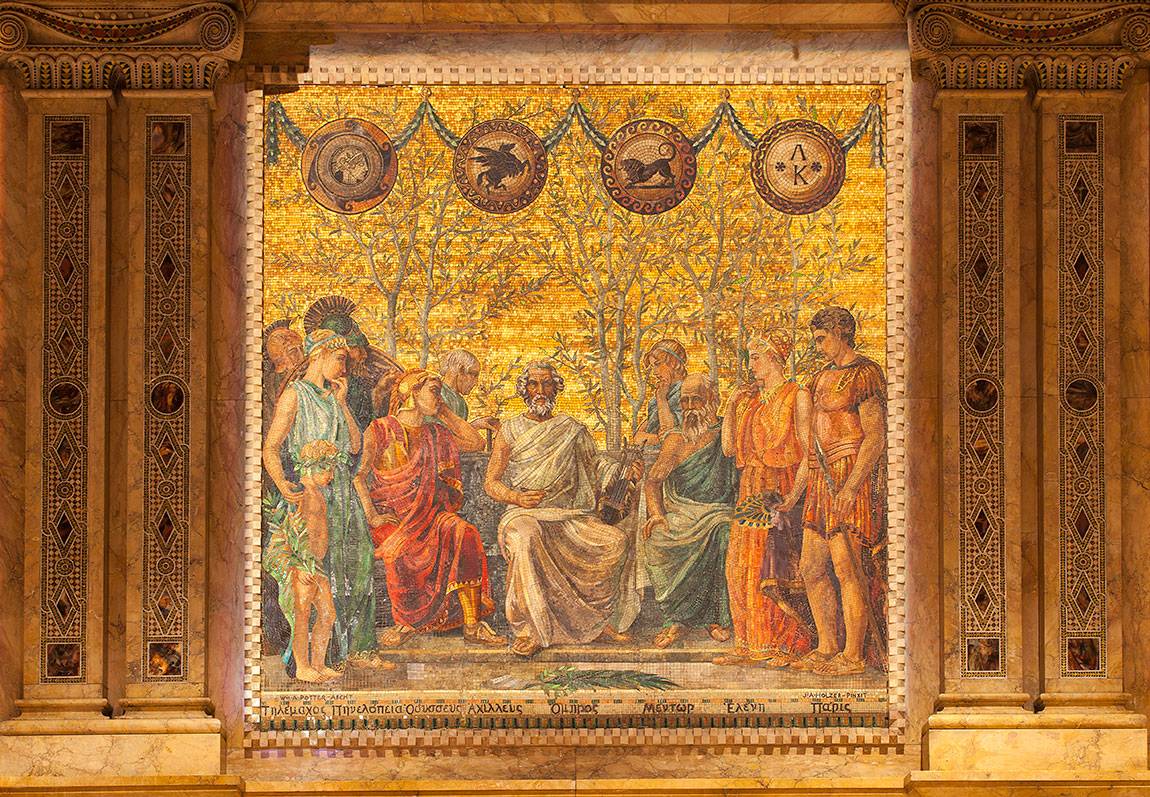 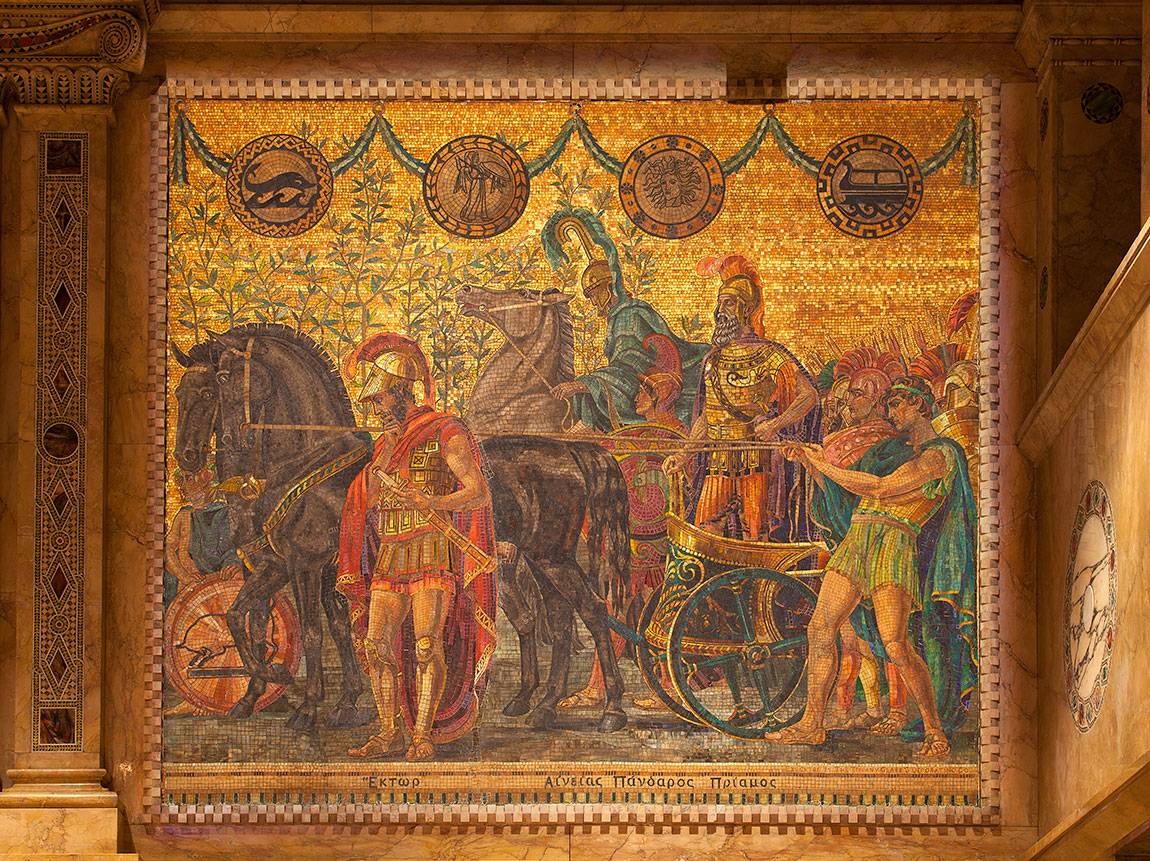 The architectural and design details throughout the interior of Alexander Hall offer as much to appreciate as the dedicated art does. The woodwork and structure of the auditorium have been preserved through renovations, and even the exit signs echo the building's aesthetic. The original gas lamps in the ambulatory surrounding the auditorium, though converted to incandescent light, also remain intact. Previously an open-air space, the ambulatory arches were enclosed with glass in 1928. This modification served as one of only a handful of changes made to the building until a major 1980s renovation. 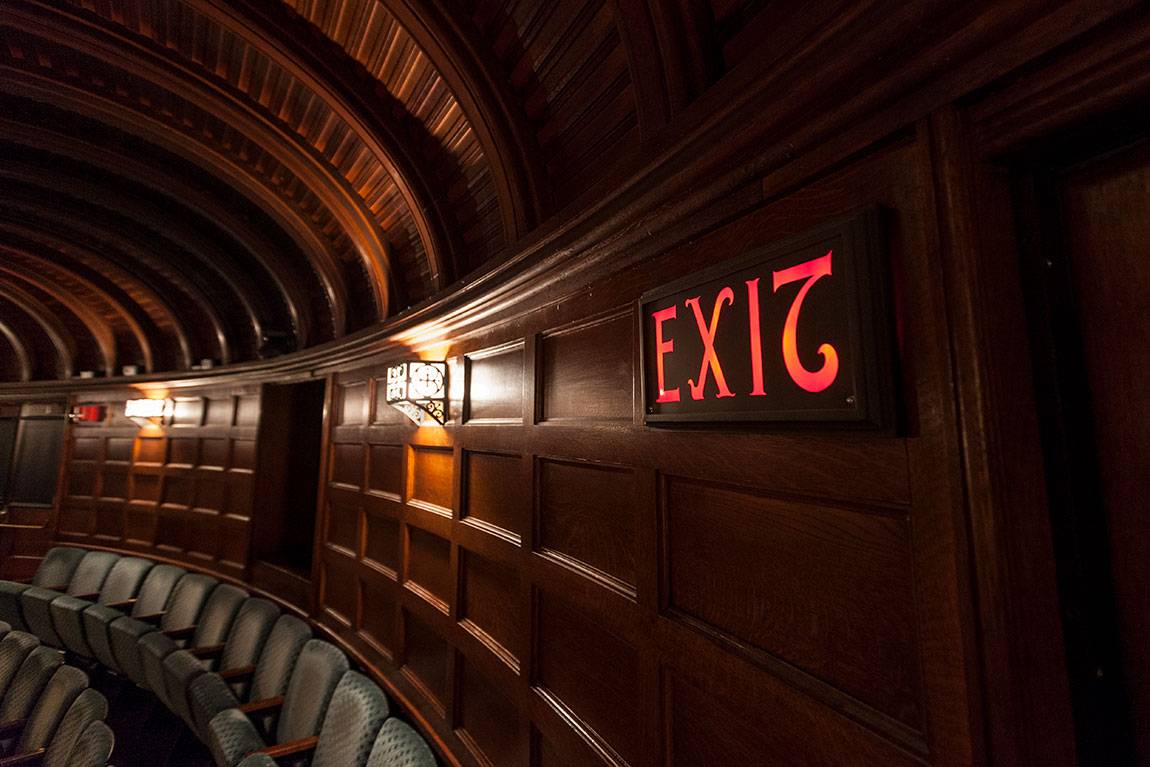 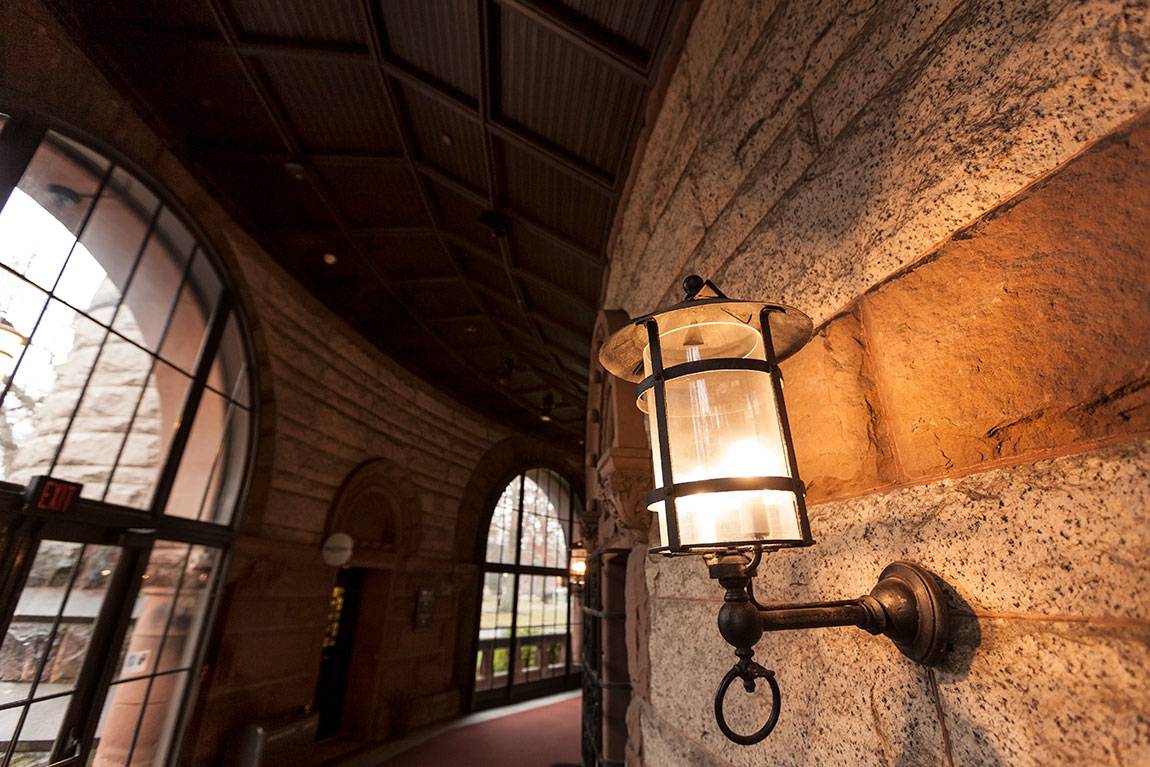 The University's Marquand Chapel was destroyed by a fire in 1920. During the construction period of the present Princeton University Chapel from 1920 to 1928, Alexander Hall served as the location for religious services. The organ pipes shown in these photos were used regularly during services in the auditorium. Although they are no longer functional, they serve as a reminder of the building's history. 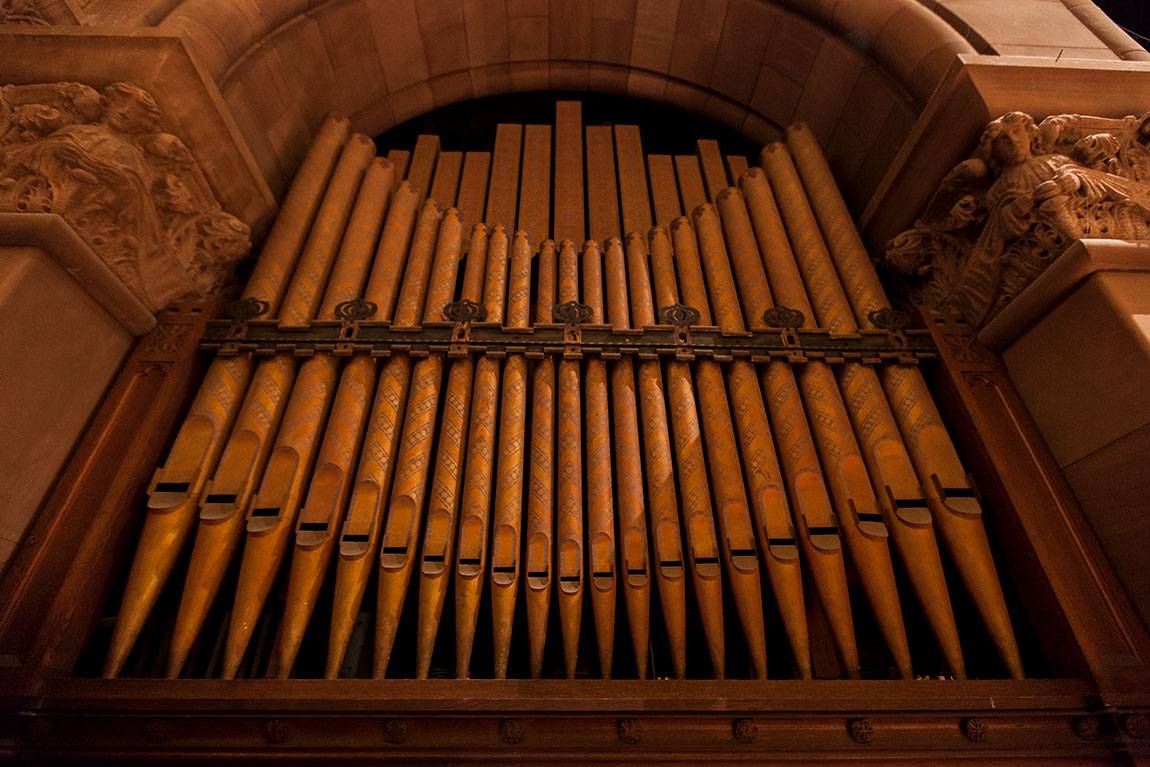 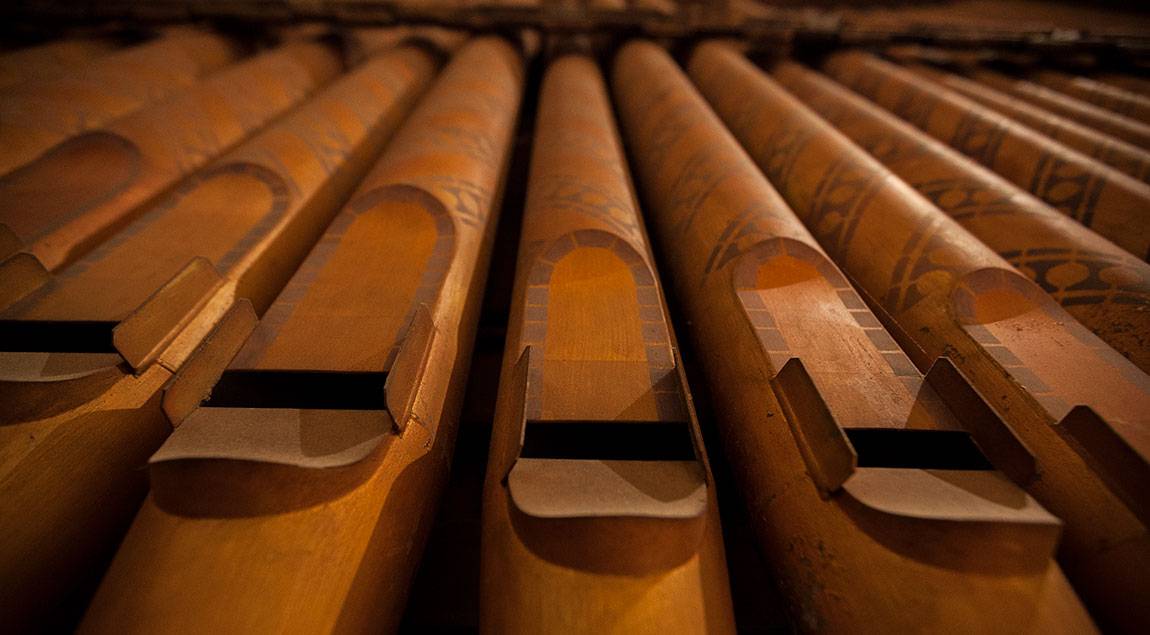 A renovated space for performances

The photo from the center balcony of the auditorium taken in daylight is an image rarely seen nowadays. By the 1980s, the auditorium was in need of a significant renovation and thanks to a generous donation from David Richardson, Class of 1966, reconstruction began. Updated features included brand new flooring; a larger stage with an elevator-mounted orchestra pit; new seats to replace the wooden bench-style seating; sound reflectors above the stage to improve room acoustics; an expanded basement with room for receptions, offices and humidity-controlled instrument storage; modern lavatories; and central air conditioning. A dedication ceremony renaming the space to Richardson Auditorium in Alexander Hall was held in 1984.

The stage serves as the venue for many performances on campus, including the residency of the Princeton University Orchestra, a nearly 100-member student organization led by conductor Michael Pratt.

Part 2 of this series, appearing Dec. 27, features the exterior of Alexander Hall. 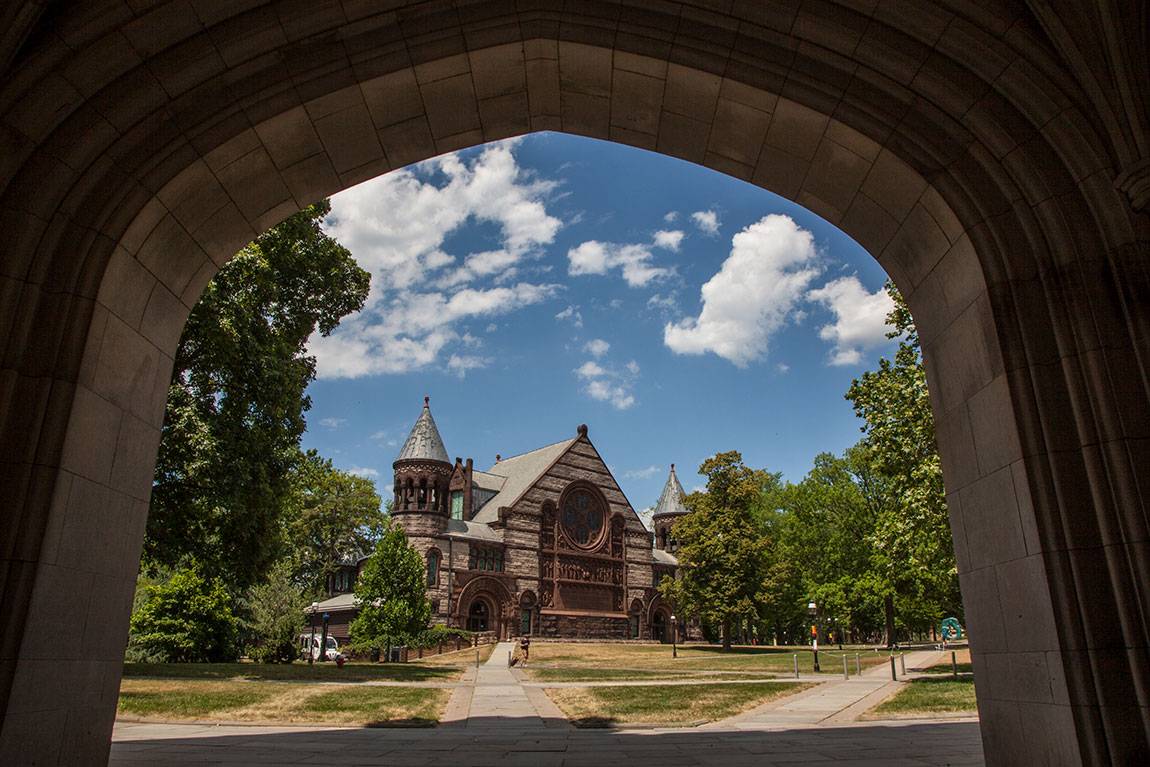