by Susan Promislo, Office of Communications

Princeton University has a substantial impact on the New Jersey economy, generating an annual total of $1.58 billion in economic output as an employer, research and innovation leader, sponsor of construction projects, purchaser of goods and services, and financial and civic contributor to local communities. That total supports an estimated 13,450 jobs with $970.7 million in earnings.

The economic and other benefits the University generates within the town of Princeton and neighboring communities, Mercer County and the state of New Jersey are presented in a new report, "Education, Innovation and Opportunity: The Economic Impact of Princeton University." This study, conducted by Appleseed, an economic consulting firm, updates a 2008 analysis and provides a comprehensive look at the University's direct and indirect effects on the vitality of the local, regional and state economy in the fiscal year ending June 30, 2015. The study also identifies resources, services and opportunities that the University contributes to enhance the quality of life in its neighboring communities and throughout the region.

(Graphics by Phillip Unetic for the Office of Communications)

"Princeton University takes pride in its longstanding partnership with the communities that surround it," said University President Christopher L. Eisgruber. "Through on-campus learning opportunities, joint transportation and safety programs, community service projects, and initiatives that encompass the arts, entrepreneurship and many other areas, the University and its neighbors continue a vibrant tradition of cooperation founded on shared values, interests and histories."

Consistently ranked as one of central New Jersey's largest, most stable employers, the University employs a workforce of more than 6,900 people (excluding student employees). Of those employees, 58 percent live in the Princeton area or elsewhere in Mercer County and 80 percent reside in New Jersey. Princeton paid nearly $602 million in employee salaries and contributed an additional $24.8 million in New Jersey state income and unemployment insurance taxes and paid family leave insurance in fiscal year 2015.

The study also found that the University's investments in research and entrepreneurship catalyze innovation throughout the state. As a major research institution, Princeton attracts hundreds of millions in federal research dollars to New Jersey each year, much of which is spent locally, to pursue solutions to pressing societal challenges. Research expenditures amounted to $457.6 million in fiscal year 2015 — a nearly 80 percent jump since 2007. Internal University resources allocated to research increased significantly, comprising 30 percent of the 2015 total.

Research collaborations with leading New Jersey companies such as Siemens and Bristol-Myers Squibb and academic institutions including Rutgers University and the Robert Wood Johnson University Hospital further extend the impact of Princeton's research enterprise. In the last five years, the University has strengthened the state's innovation ecosystem through the launch of the Intellectual Property Accelerator Fund to advance researchers' proof-of-concept work, the Keller Center's eHub as a focal point for entrepreneurship, and the Alumni Entrepreneurs Fund to support alumni startups.

"Princeton is committed to extending the benefits of its research capabilities and innovation beyond the campus, into companies and organizations that can translate ideas into practical solutions to improve social and economic well-being," said Coleen Burrus, Princeton's director of corporate engagement and foundation relations. "There are so many innovative companies right here in New Jersey, and the University is eager to continue to work with them to build research collaborations." 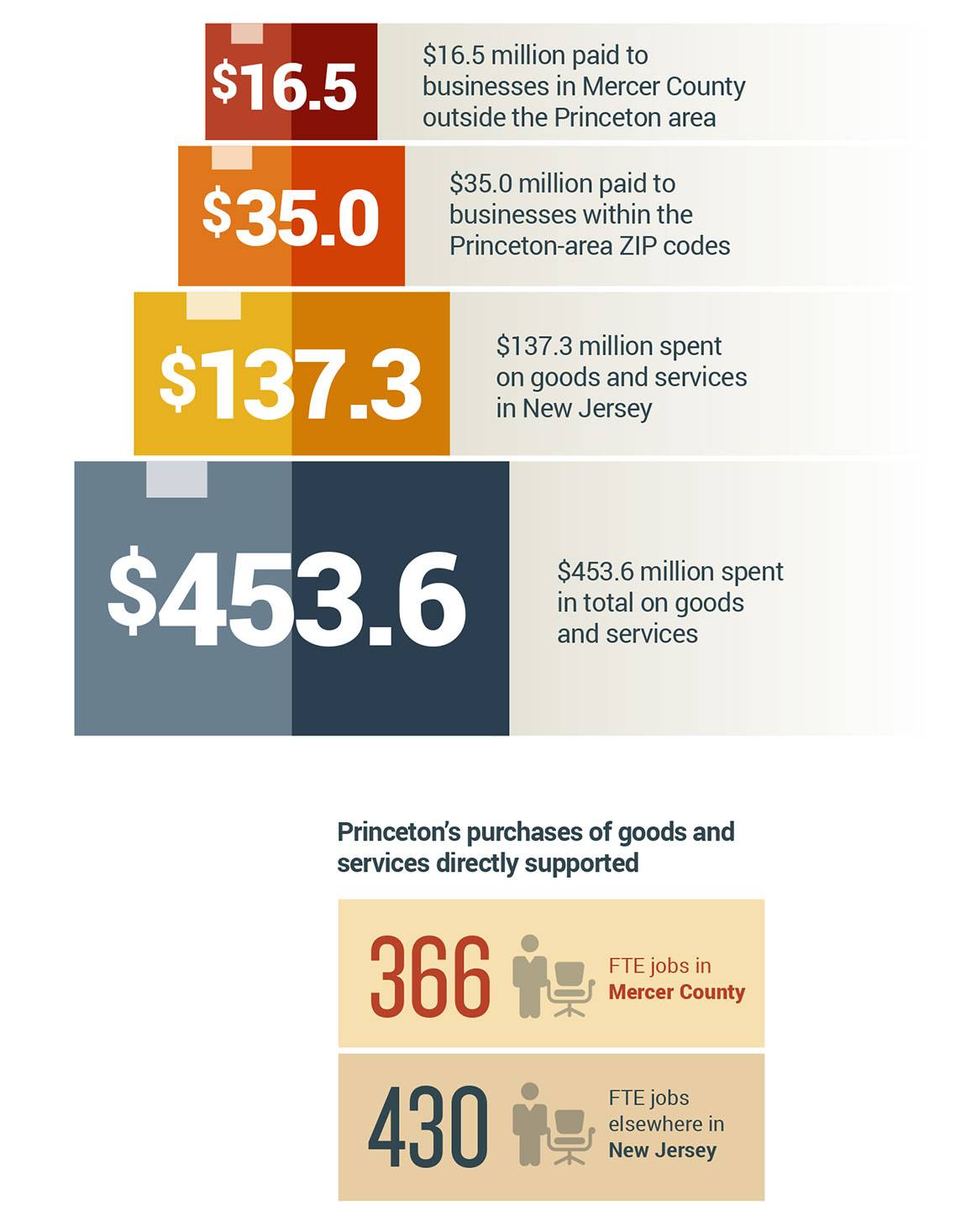 Businesses across the region significantly benefit from University spending on goods, services and capital construction projects. In 2015, Princeton spent $453.6 million in goods and services to advance its education and research mission; of that total, nearly $137.3 million was paid to New Jersey vendors, including $35 million paid to Princeton-area businesses and $16.5 million paid to businesses elsewhere in Mercer County. During the same period, capital construction and renovation projects amounted to $318.1 million in University spending, 43 percent of which went to New Jersey contractors and vendors.

With the campus serving as a destination for academic, athletic and cultural events, the Princeton regional economy sees a steady infusion of visitor spending each year. An estimated 768,000 people visited the University in 2015, spending nearly $50 million and directly and indirectly accounting for $63.4 million in economic output. Local consumer spending was supplemented by an estimated $59.7 million that Princeton students spent in the community.

The University makes direct financial contributions to the towns and county in which it resides. In fiscal year 2015 it paid more than $16.3 million in property taxes, fees and voluntary contributions to local governments. This included a voluntary unrestricted contribution of $2.86 million to the town of Princeton under a seven-year agreement that provides for increases each year through 2020 as well as capital contributions valued at $2.9 million. The report notes that "the stabilizing presence of Princeton University” contributes to an Aaa bond rating for the town that leads to significant savings in its borrowing costs. 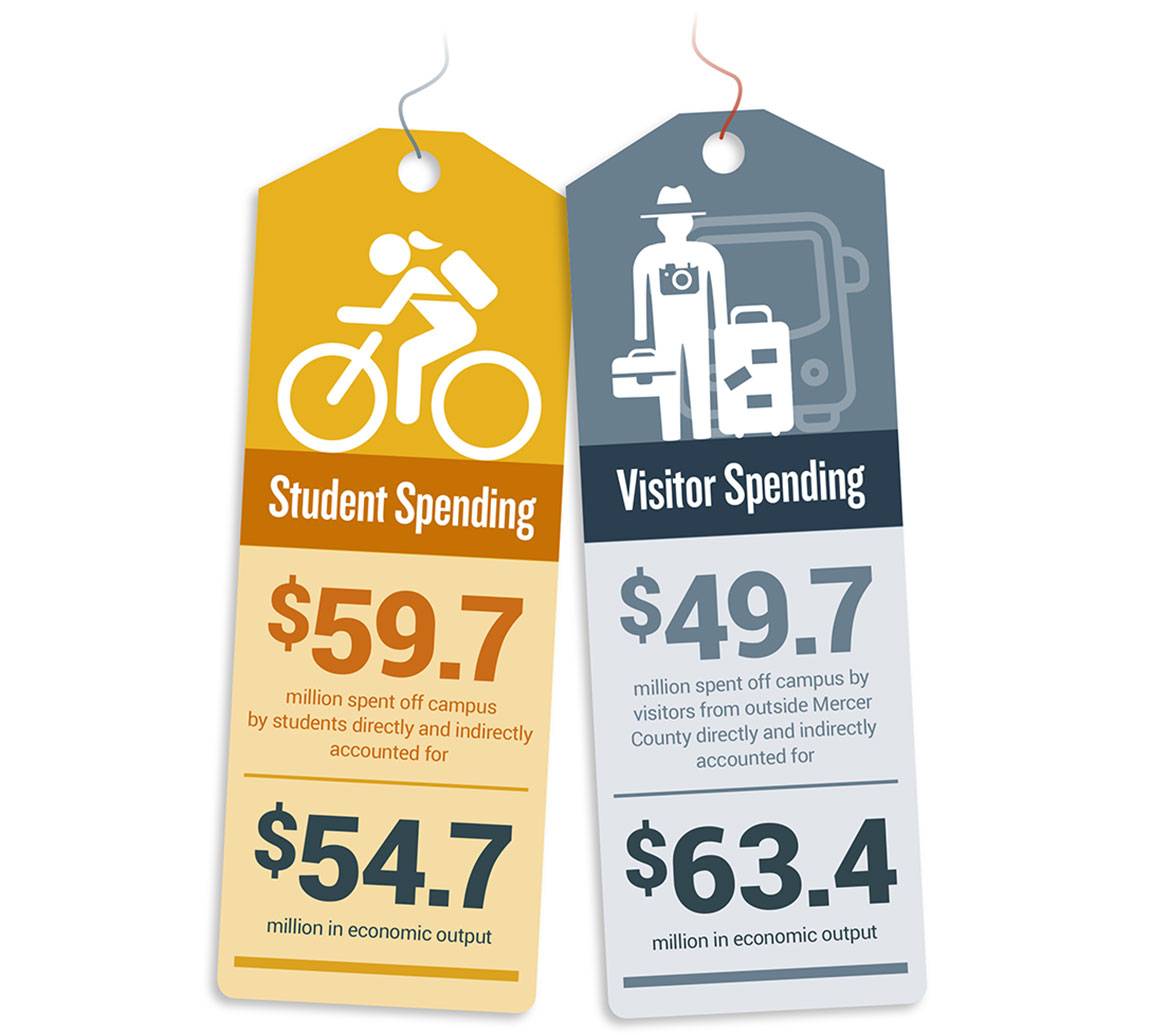 The University enhances quality of life through its financial and volunteer support to community and civic organizations; maintenance of area roads; volunteer, training and funding support to public safety agencies; commitment to sustainability; and provision of local affordable housing. In addition, community members of all ages enjoy the wide variety of educational, cultural and athletic programming that the University offers year-round, much of it at modest cost or free of charge. In 2014-15, for example, 1,165 people participated in the University’s Community Auditing Program to take regular university courses on a non-credit basis, with more than half of the participants coming from the Princeton area.

The Appleseed analysis forecasts that Princeton's continued investment in research and innovation, renovation and construction of new facilities, and plans to expand student enrollment will lead to even greater contributions by the University to New Jersey's economic strength in the years to come.

A report summary and the full Appleseed analysis are available online.