An influx of pollution from Asia in the western United States and more frequent heat waves in the eastern U.S. are responsible for the persistence of smog in these regions over the past quarter century despite laws curtailing the emission of smog-forming chemicals from automobile tailpipes and factories.

The study, led by researchers at Princeton University and the National Oceanic and Atmospheric Administration's Geophysical Fluid Dynamics Laboratory (GFDL), highlights the importance of maintaining domestic emission controls on cars, power plants and other industries at a time when pollution is increasingly global.

Published today in the journal Atmospheric Chemistry and Physics, the study looked at the sources of smog, also known as ground-level ozone, across a period ranging from the 1980s to today. Ground-level ozone, which is distinct from the ozone in the upper atmosphere that protects the planet from ultraviolet radiation, is harmful to human health, exacerbating asthma attacks and causing difficulty breathing. It also harms sensitive trees and crops.

Despite a 50 percent cut in smog-forming chemicals such as nitrogen oxides, commonly known as "NOx", over the past 25 years, ozone levels measured in rural areas of the west have actually climbed. And while ozone in the eastern U.S. has decreased overall, the levels can spike during heat waves. 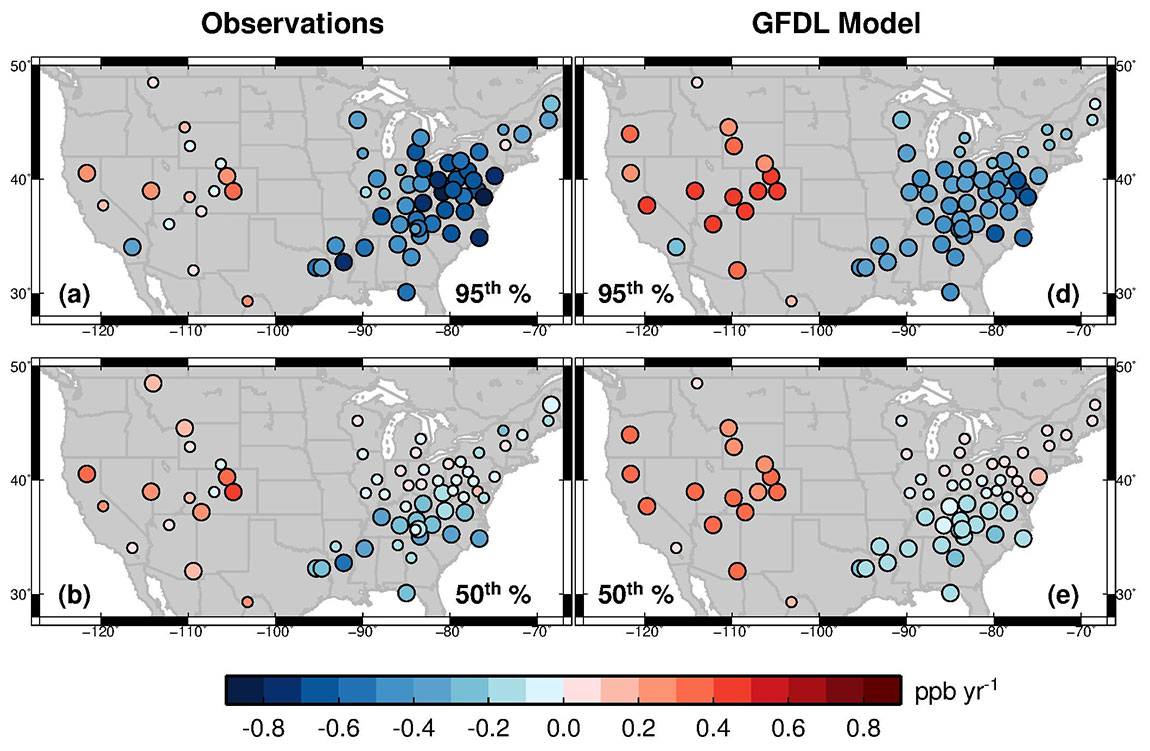 Surface-level ozone, also known as smog, has increased over the past quarter century at western U.S. rural sites during springtime, partly due to rising Asian pollution, whereas smog has decreased in the eastern U.S. but can spike due to heat waves, according to a new study from Princeton University and the National Oceanic and Atmospheric Administration's Geophysical Fluid Dynamics Laboratory (GFDL). Shown are the 1988-2014 trends in springtime ozone levels on days that were very smoggy (top panel) and on days that were of average smogginess (bottom panel), from observations (left) and from a model built by the Geophysical Fluid Dynamics Laboratory (right). Larger circles indicate sites where there is greater certainty about the ozone trend. On very smoggy days (top panel), ozone levels have declined in the east, as indicated by the blue circles. Ozone levels have increased in the west, as indicated by the red circles, despite a 50 percent reduction in the emission of smog-forming pollutants. (Images courtesy of Meiyun Lin, Princeton University Program in Atmospheric and Oceanic Sciences the National Oceanic and Atmospheric Administration's Geophysical Fluid Dynamics Laboratory)

The study traced the increase of ozone in the west to the influx of pollution from Asian countries, including China, North and South Korea, Japan, India, and other South Asian countries. Collectively, the region has tripled its emissions of NOx since 1990. In the eastern U.S., meanwhile, heat waves — which have become more frequent in the past few decades — trap polluted air in place, leading to temporary escalations in locally produced ozone.

The study explains why springtime ozone levels measured in Yellowstone National Park and other western parks far from urban areas have climbed over the past quarter century. According to the study, springtime ozone levels in the national parks rose during that period by 5 to 10 parts per billion (ppb), which is significant given that the federal ozone standard is 70 ppb.

The influx of pollution from Asia could make it difficult for these areas to comply with the federal ozone standards, according to the study's authors. "Increasing background ozone from rising Asian emissions leaves less room for local production of ozone before the federal standard is violated," said Meiyun Lin, the lead author of the study. Lin is a research scholar in the Program in Atmospheric and Oceanic Sciences at Princeton University and a scientist at GFDL.

Lin's co-authors were Larry Horowitz, also of GFDL; Richard Payton and Gail Tonnesen of the U.S. Environmental Protection Agency; and Arlene Fiore of the Lamont-Doherty Earth-Observatory and Department of Earth and Environmental Sciences at Columbia University.

Using ozone measurements combined with climate models developed at GFDL, the authors identified pollution from Asia as driving the climb in ozone in western U.S. national parks in the spring, when wind and weather patterns push Asian pollution across the Pacific Ocean. In the summer, when these weather patterns subside, ozone levels in national parks are still above what would be expected given U.S. reductions in ozone-precursors.

While it has been known for over a decade that Asian pollution contributes to ozone levels in the United States, this study is one of the first to categorize the extent to which rising Asian emissions contribute to U.S. ozone, according to Lin.

In the eastern United States, where Asian pollution is a minor contributor to smog, NOx emission controls have been successful at reducing ozone levels. However, periods of extreme heat and drought can trap pollution in the region, making bad ozone days worse. Regional NOx emission reductions alleviated the ozone buildup during the recent heat waves of 2011 and 2012, compared to earlier heat waves such as in 1988 and 1999. As heat waves appear to be on the rise due to global climate change, smog in the eastern U.S. is likely to worsen, according to the study.

NASA satellite images show Asian pollution plumes drifting east toward North America. Shown are satellite-measured levels of carbon monoxide, a precursor to ozone formation and a marker of polluted air, from June 12 to 21, 2010.

Climate models such as those developed at GFDL can help researchers predict future levels of smog, enabling cost-benefit analyses for costly pollution control measures. The researchers compared results from a model called GFDL-AM3 to ozone measurements from monitoring stations over the course of the last 35 years, from 1980 to 2014.

Prior studies using global models poorly matched the ozone increases measured in western national parks. Lin and co-authors were able to match the measurements by narrowing their analysis to days when the airflow is predominantly from the Pacific Ocean.

Modeling the sources of air pollution can help explain where the ozone measured in the national parks is coming from, explained Lin. "The model allows us to divide the observed air pollution into components driven by different sources," she said.

The team also looked at other contributors to ground-level ozone, such as global methane from livestock and wildfires. Wildfire emissions contributed less than 10 percent and methane about 15 percent of the western U.S. ozone increase, whereas Asian air pollution contributed as much as 65 percent.

These new findings suggest that a global perspective is necessary when designing a strategy to meet U.S. ozone air quality objectives, said Lin.

The negative effect of imported pollution on the United States' ability to achieve its air quality goals is not wholly unexpected, according to Owen Cooper, a senior research scientist at the University of Colorado and the NOAA Earth System Research Laboratory, who is familiar with the current study but not directly involved. "Twenty years ago scientists first speculated that rising Asian emissions would one day offset some of the United States' domestic ozone reductions," Cooper said. "This study takes advantage of more than 25 years of observations and detailed model hindcasts to comprehensively demonstrate that these early predictions were right."

This work was supported by funding from NASA grants NNH13ZDA001N-AURAST and NNX14AR47G.