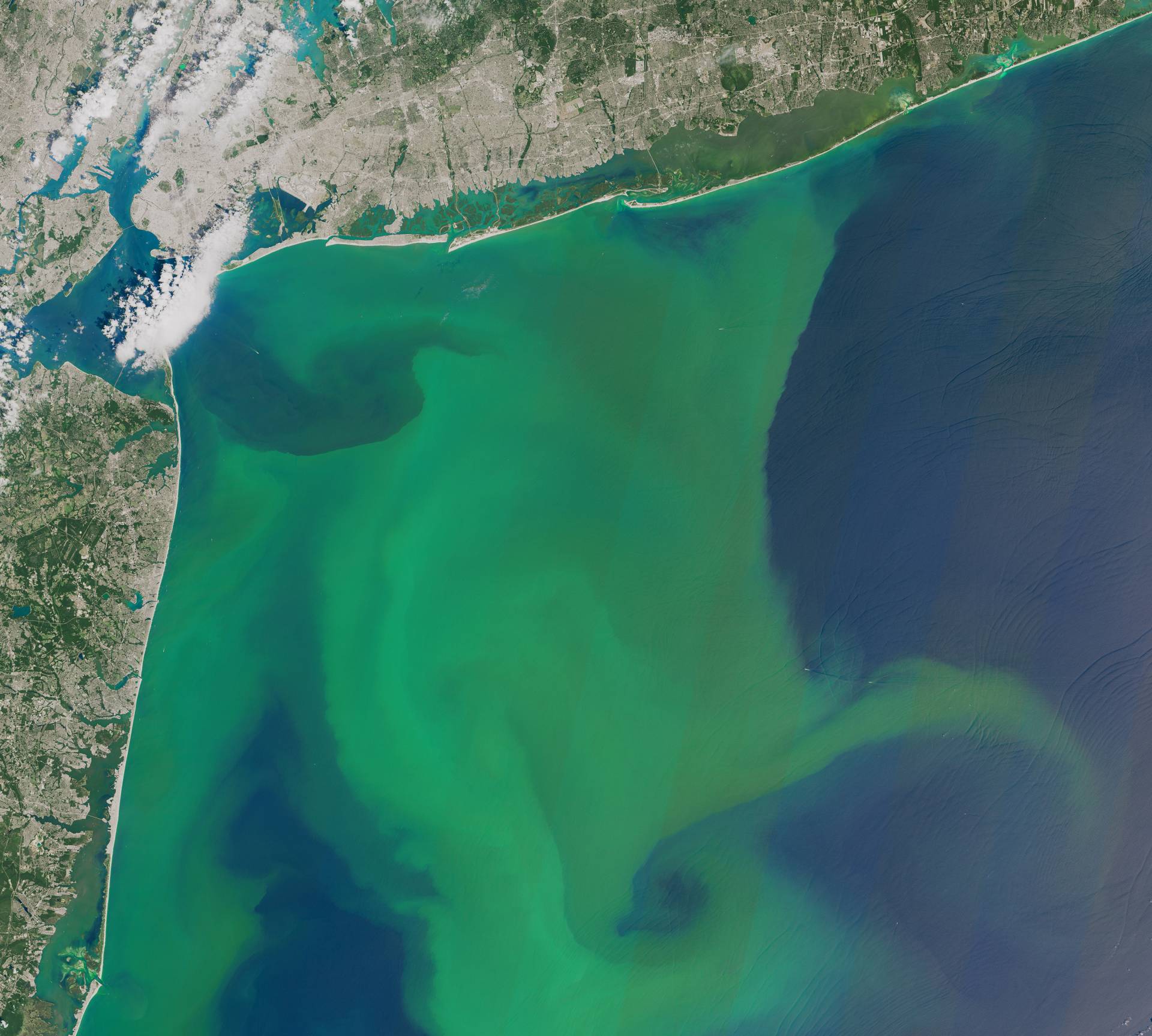 A team of researchers, including those from Princeton University, reported that climate change-induced precipitation changes will increase nitrogen pollution, especially in the Midwest and Northeast of the United States. This will, in turn, exacerbate eutrophication, a process by which waterways become overloaded with nutrients. Eutrophication promotes the growth of harmful species and leads to oxygen-depleted dead zones that devastate marine flora and fauna. Pictured here is an algal bloom that occurred off the Atlantic coast in the summer of 2015.

If climate change is not curbed, increased precipitation could substantially overload waterways in the United States with excess nitrogen, according to a new study published July 28 in the journal Science.

A team of researchers, including those from Princeton University, reported that climate change-induced precipitation changes will increase nitrogen pollution, especially in the Midwest and Northeast. This will, in turn, worsen eutrophication, a process by which waterways become overloaded with nutrients.

Venkatramani Balaji, one of the study’s authors and head of the modeling system group in the Program in Atmospheric and Oceanic Sciences (AOS), a collaboration between Princeton and the National Oceanic and Atmospheric Administration's Geophysical Fluid Dynamics Laboratory (GFDL), and his colleagues sought to examine the effects of predicted precipitation changes due to climate change on eutrophication, based on computer simulations.

The work builds on a previous study by the researchers that demonstrated not only that coastal ecosystems are affected by nitrogen pollution, but also that changes in precipitation can amplify these effects. "In this [new] study, we looked at what this implied for the future of these ecosystems, when combined with projections of future precipitation over the next decades," Balaji said.

They found that, if greenhouse gas emissions follow a "business-as-usual" scenario, meaning that there is no sustained intervention to curb the amount of greenhouse gases released into the atmosphere, future precipitation changes alone will lead to large and robust increases in nitrogen pollution — rising nearly 20 percent by 2100. The increases will be especially substantial in the Upper Mississippi Atchafalaya River Basin, waterways in the Northeast and the Great Lakes region, which already has high concentrations of human-made nitrogen in the environment.

"Nitrogen runoff into rivers must be reduced considerably — more than previously estimated — to maintain the same levels of nitrogen flow into coastal waters as today," said Balaji. "While it is now quite widely accepted that shortages of water for drinking or agriculture could be quite disruptive of life in the 21st century, this and other studies show that we must be concerned not just about water quantity, but quality."

"The authors demonstrate that areas with high fertilizer usage, high precipitation amounts in the present and robust projected increases in precipitation are most likely to see increases in nitrogen loading in the future," said Kirsten Findell, a research physical scientist in the Climate Change, Variability and Prediction Group at GFDL. Findell, who earned her B.S.E. in civil engineering at Princeton, is familiar with the research but had no role in it.

"This result has important implications for land use management in the United States and beyond, and demonstrates that water quality concerns cannot be tackled without considering changes in precipitation characteristics," Findell said.

Balaji and his colleagues' model is specific to the United States, but they also identified India, China and Southeast Asia as regions at high risk for large increases in nitrogen pollution due to increased precipitation by 2100. Balaji suggested that "risk management for future eutrophication is indeed a problem of global scope, magnified by projected changes in precipitation patterns."

Other authors on the paper, "Eutrophication will increase during the 21st century as a result of precipitation changes," are Eva Sinha and Anna Michalak of the Department of Global Ecology at the Carnegie Institution for Science and the Department of Earth System Science at Stanford University.

The research was supported in part by the Cooperative Institute for Climate Science at Princeton University (Grant NA08OAR4320752) and by the National Science Foundation (Grant 1313897).