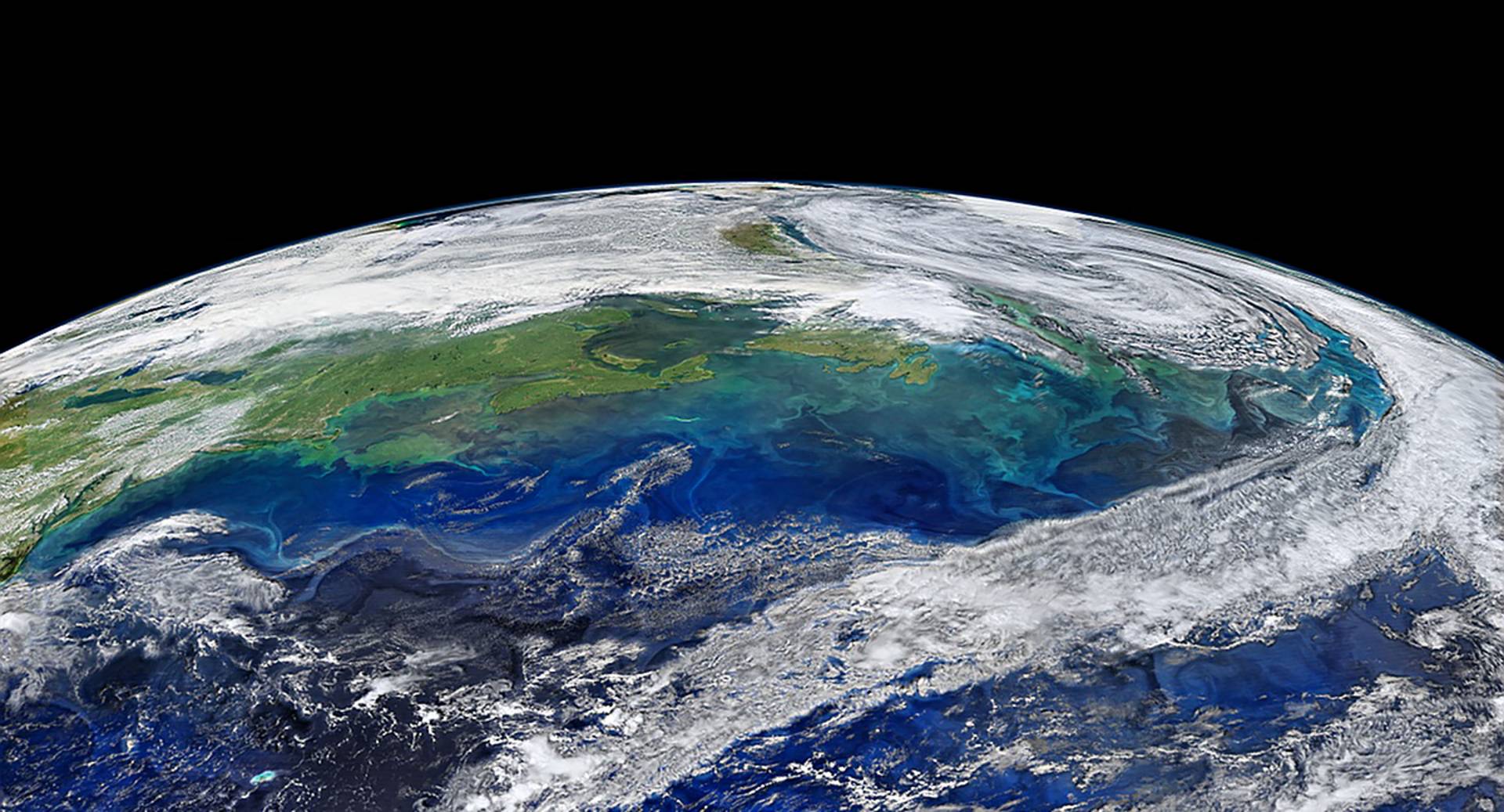 Researchers led by Princeton University examined a range of possible climate-related impacts on the ocean to predict when these impacts are likely to occur. Some impacts – such as sea temperature rise and acidification — have already begun while others — like changes to microbial productivity, which serves as the basis of the marine food web, will happen over the next century. Images from NASA EarthData show ocean color, an indicator of microbial productivity.

Sea temperature and ocean acidification have climbed during the last three decades to levels beyond what is expected due to natural variation alone, a new study led by Princeton researchers finds. Meanwhile other impacts from climate change, such as changes in the activity of ocean microbes that regulate the Earth’s carbon and oxygen cycles, will take several more decades to a century to appear. The report was published Aug. 19 online in the journal Nature Climate Change.

The study looked at physical and chemical changes to the ocean that are associated with rising atmospheric carbon dioxide due to human activities. “We sought to address a key scientific question: When, why and how will important changes become detectable above the normal variations that we expect to see in the global ocean?” said Sarah Schlunegger, a postdoctoral research associate at Princeton University's Program in Atmospheric and Oceanic Sciences (AOS).

The study confirms that outcomes tied directly to the escalation of atmospheric carbon dioxide have already emerged in the existing 30-year observational record. These include sea surface warming, acidification and increases in the rate at which the ocean removes carbon dioxide from the atmosphere.

In contrast, processes tied indirectly to the ramp up of atmospheric carbon dioxide through the gradual modification of climate and ocean circulation will take longer, from three decades to more than a century. These include changes in upper-ocean mixing, nutrient supply, and the cycling of carbon through marine plants and animals.

"What is new about this study is that it gives a specific timeframe for when ocean changes will occur," said Jorge Sarmiento, the George J. Magee Professor of Geoscience and Geological Engineering, Emeritus. "Some changes will take a long time while others are already detectable."

The ocean provides a climate service to the planet by absorbing excess heat and carbon from the atmosphere, thereby slowing the pace of rising global temperatures, Schlunegger said. This service, however, comes with a penalty — namely ocean acidification and ocean warming, which alter how carbon cycles through the ocean and impacts marine ecosystems.

Acidification and ocean warming can harm the microbial marine organisms that serve as the base of the marine food web that feeds fisheries and coral reefs, produces oxygen and contributes to the draw-down of atmospheric carbon dioxide concentration.

Climate research is often divided into two categories, modeling and observations — those scientists who analyze observations of the real Earth, and those who use models to predict what changes are to come. This study leverages the predictions made by climate models to inform observational efforts of what changes are likely, and where and when to look for them, Schlunegger said.

The researchers conducted modeling that simulates potential future climate states that could result from a combination of human-made climate change and random chance. These experiments were performed with the Earth System Model, a climate model that has an interactive carbon cycle, so that changes in the climate and carbon cycle can be considered in tandem.

Use of the Earth System Model was facilitated by John Dunne, who leads ocean carbon modeling activities at the National Oceanic and Atmospheric Administration (NOAA)'s Geophysical Fluid Dynamics Laboratory in Princeton. Along with Sarah Schlunegger and Jorge Sarmiento, the Princeton team included Richard Slater, senior earth system modeler in AOS, and Keith Rodgers, an AOS research oceanographer now at Pusan National University in South Korea. The team also included Thomas Frölicher, a professor at the University of Bern and a former postdoctoral fellow at Princeton, and Masao Ishii of the Japan Meteorological Agency.

The finding of a 30- to 100-year delay in the emergence of effects suggests that ocean observation programs should be maintained for many decades into the future to effectively monitor the changes occurring in the ocean. The study also indicates that the detectability of some changes in the ocean would benefit from improvements to the current observational sampling strategy. These include looking deeper into the ocean for changes in phytoplankton, and capturing changes in both summer and winter, rather than just the annual mean, for the ocean-atmosphere exchange of carbon dioxide.

"Our results indicate that many types of observational efforts are critical for our understanding of our changing planet and our ability to detect change," Schlunegger said. These include time-series or permanent locations of continuous measurement, as well as regional sampling programs and global remote sensing platforms.

The project was funded by a NASA Earth Science Division grant (NNX17AI75G) and NOAA grants (NA17RJ2612, NA08OAR4320752 and NA11OAR4310066). Additional support came from the Institute for Basic Science in Busan, South Korea, and the Swiss National Science Foundation.