A photo of a lone white rhinoceros is projected onto a screen behind Jacob Dlamini, a Princeton University assistant professor of history, as his students argue the justification of using violence against the poachers and criminal syndicates who illegally hunt the animal for its iconic horn — and the moral authority non-Africans have to push for those measures.

"What is it about poaching that makes someone automatically surrender their right to life?" asked William Lathrop, a senior majoring in religion and pursuing a certificate in environmental studies. "How do we determine that people no longer have a right to life?"

"Are we making poachers into vermin and treating them the same way?" asked Clare Jeong, a junior studying history and environmental science. Myesha Jemison, a junior majoring in Spanish and Portuguese, replied, "The difference between poachers and vermin is that we hold humans to a social standard."

"What would you say to a poacher who asks, 'What's a rhino mean to you?'" said sophomore Nicole Kalhorn. "How do you answer that?" 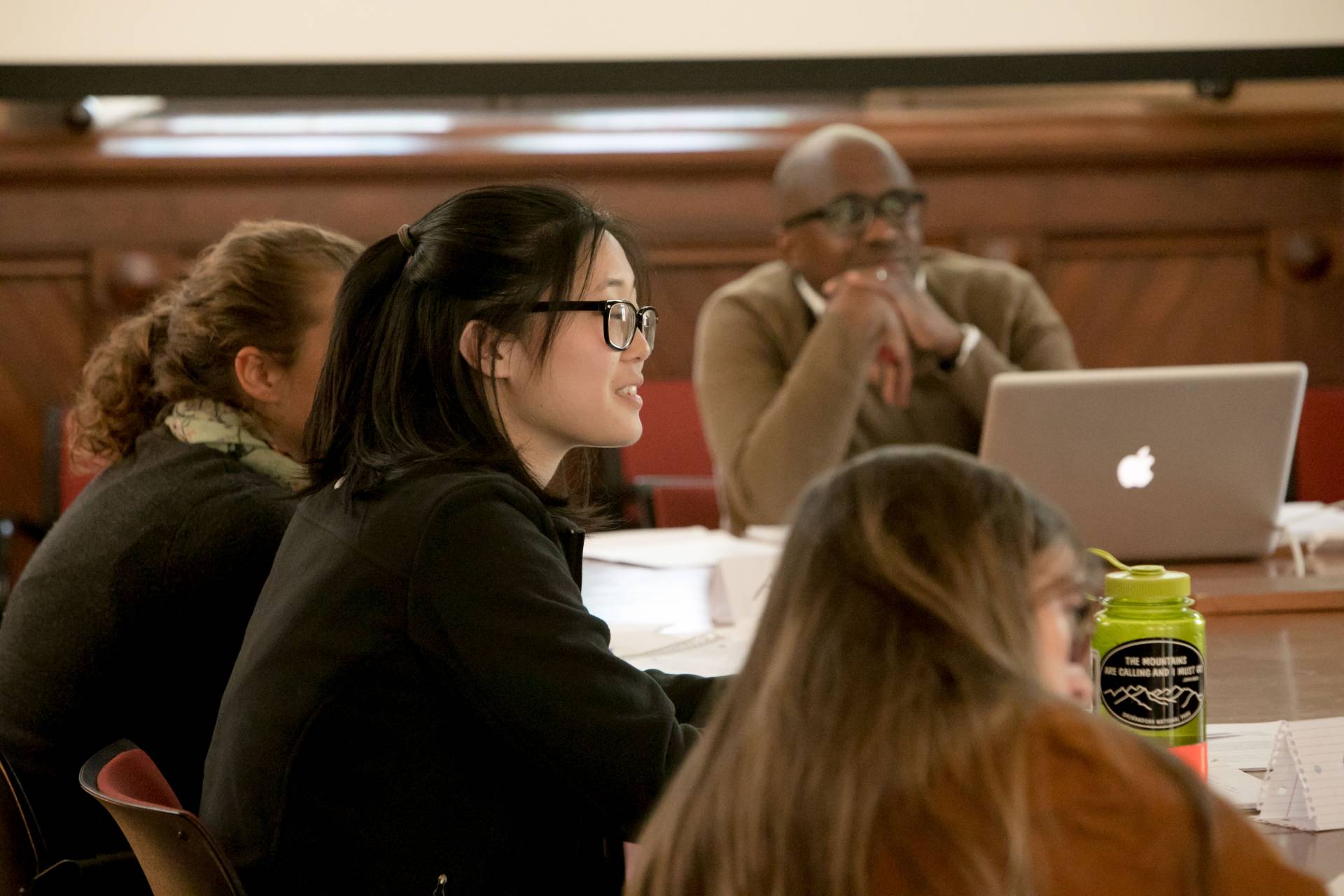 Princeton University junior Clare Jeong discusses non-Africans' passion for protecting rhinoceros and other large mammals in the class, "White Hunters, Black Poachers." Taught by Jacob Dlamini (background), an assistant professor of history, the class uses the ecological history of Africa to discuss the effectiveness and moral considerations of conservation.

Searching for the answer led to the question, Has anyone in the room actually seen a rhinoceros in the wild? "I don't think I've ever seen a rhino," Jeong said. "But I still feel very attached to them."

Dlamini created this class, "White Hunters, Black Poachers: Africa and the Science of Conservation," which he taught for the first time this semester, to encourage these exchanges. He developed the class with support from Princeton's Program in African Studies. His goal is to help students understand the cultural and political assumptions that underpin conservation, but are often passed off as science, he said.

"What the world needs is a much more nuanced appreciation of conservation and environmental history," Dlamini said. "I want students to walk away with a better understanding of Africa and the history of conservation, and to see the need to rethink conventional approaches to conservation."

Dlamini thinks that conservation is too often simplified as a matter of protecting animals and ecosystems from people. A qualified field guide and graduate of the Southern African Wildlife College, Dlamini earned his Ph.D. in history from Yale University in 2012 and joined Princeton's faculty in 2015.

"The assumption is that humans are bad for nature, but it's more complex," Dlamini said. "You can't simply draw a line and say culture is where we are and nature is somewhere else and is pristine." 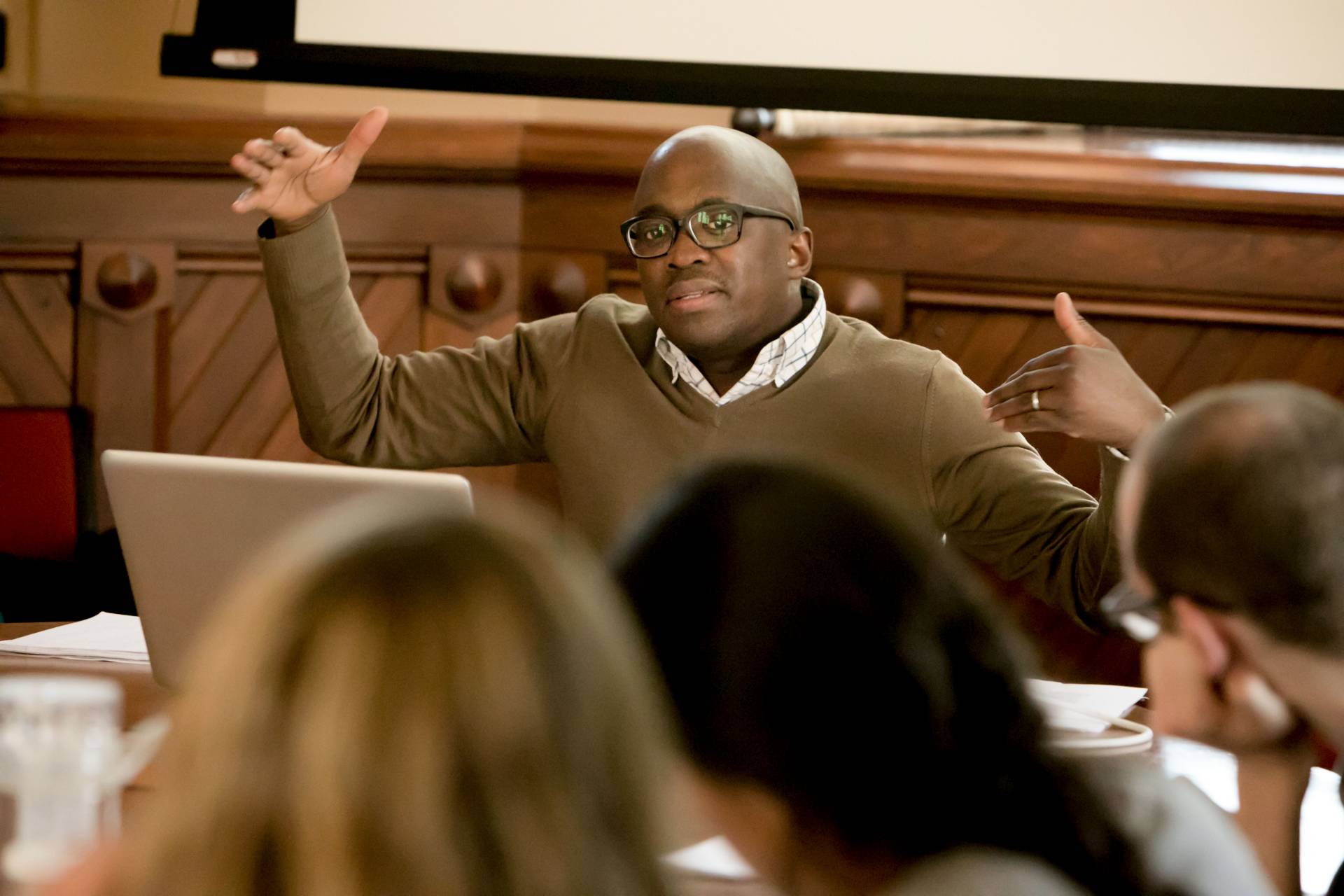 Dlamini, a qualified field guide and graduate of the Southern African Wildlife College, thinks that conservation is too often seen as protecting animals and ecosystems from people, which contradicts Africa's history of humans and nature coexisting. In Africa, enormous parks and nature preserves — catering largely to white Western tourists — have displaced communities whose connections with the land span millennia.

Africa exemplifies the true complexity of conservation, he said. Few places on Earth experience Africa's close coexistence between nature and human culture — and in few places has that connection been so actively severed. Africa has been central to the evolution of conservation since the 18th century when white big-game hunters sought to stem the slaughter of large mammals so that, ironically, they would still have animals to shoot in the future, Dlamini said.

Today, the enormous parks and preserves set aside to protect and showcase the continent's unique megafauna — particularly for white Western tourists — have displaced communities such as the Tsonga and Maasai whose connections with that land span millennia. These partitions dismiss centuries of indigenous knowledge systems drawn from animal-human interactions, Dlamini said.

"We tell locals that the way to save the elephant is to keep people out, but that's not the history of Africa, and you can't understand why ordinary Africans would be opposed to national parks and conservation unless you understand this history," he said. "You cannot hope to protect the environment by casting Africans as the problem." 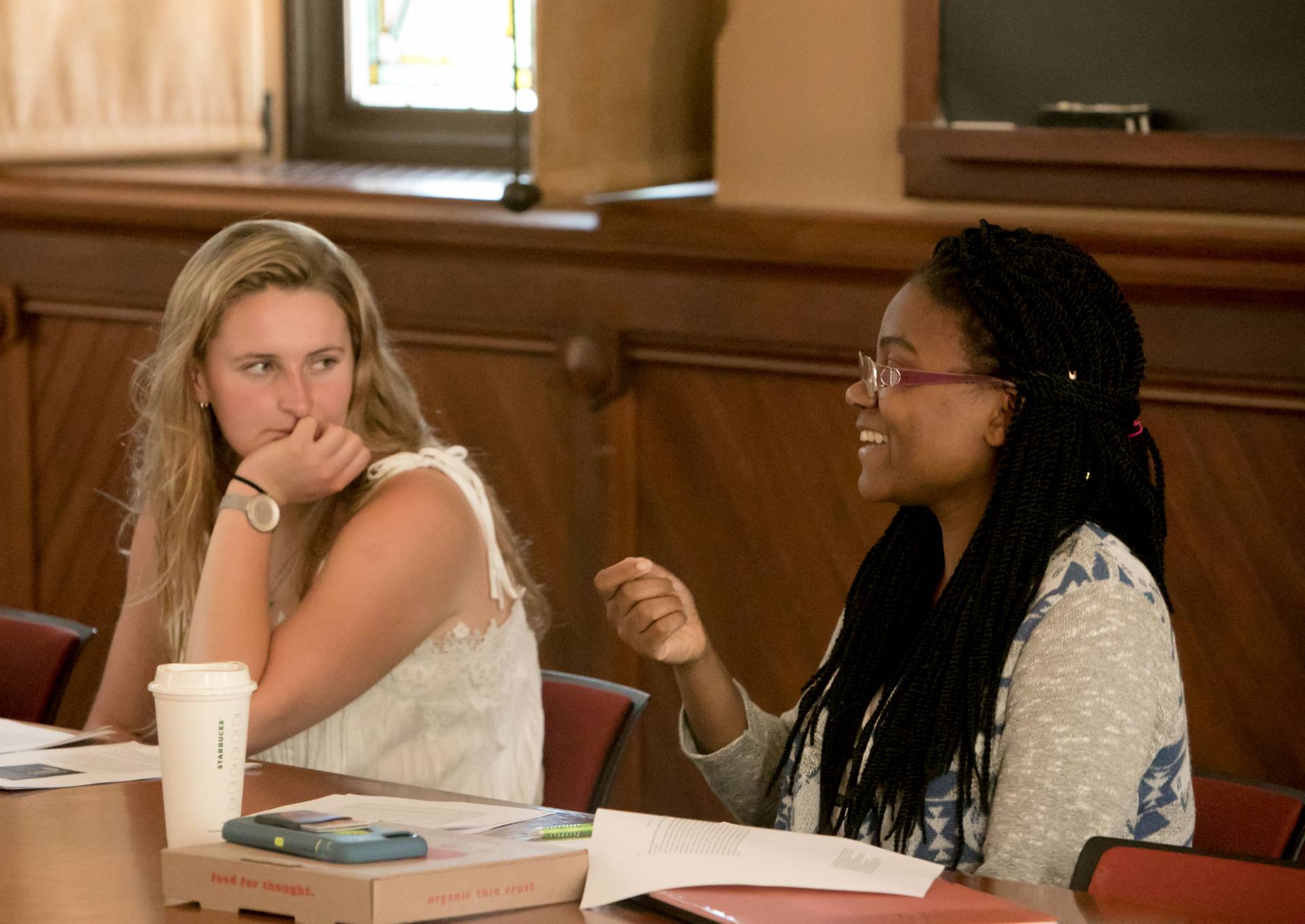 Junior Myesha Jemison (right) and sophomore Charlotte Valentine talk about how people develop a connection to Africa and dedication to its wildlife — even if they've never experienced those animals personally.

Charlotte Valentine, a sophomore studying history and environmental science, said that the class has awakened her to the fact that it is not necessarily possible or beneficial to separate humans and the environment.

"Prior to this class I had strong faith that conservation is always positive," said Valentine, who is from New Zealand. "My opinion has grown to see more gray where I previously saw only black and white. This is perhaps because the nature of conservation where I am from primarily impacts animals; conservation in Africa is culturally and spatially linked, and animals are not the only beings affected.

"Questioning new environmental policy and reform will forever be a side effect of this class," she said. "The conservation of animals — whatever the motivation — hugely impacts the people, and not always in expected ways." 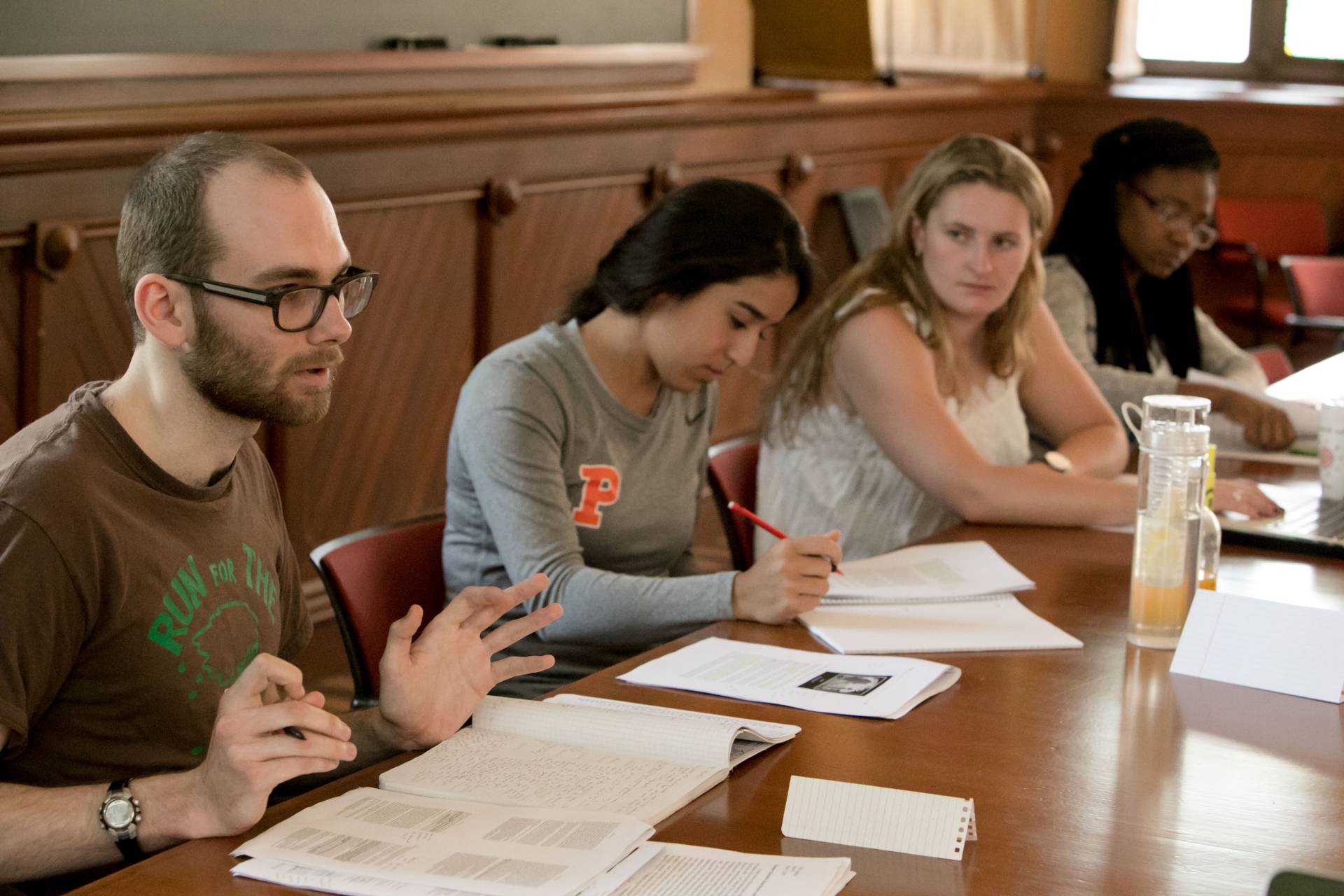 Senior William Lathrop (left) said that the class raises questions that challenge students' perceptions of conservation and the lives of animals. During one discussion, sophomore Nicole Kalhorn (second from left) asked how a person should respond if a poacher asked what a rhino's life means to them.

In class April 5, students discussed the idea of nature — and thus conservation — as inherently devoid of humanity. "If humans want to interact with the natural world, it's seen as a disrespectful thing," said sophomore Artemis Eyster. "It makes us put more value on a rhino that is endangered than people we don't know."

"The general public does not get the full story that these tribes have been moved around by their governments — I think that creates a skewed vision of this subject," said Erin Redding, a sophomore concentrating in the Woodrow Wilson School of Public and International Affairs. Redding questioned the authenticity of her own experience working with conservation clubs in Kenya: "Is it right for me as an outsider and foreigner? I've been exposed to only one side of the story and now I'm going into Kenya and telling them my one side of the story as if they should just accept it."

"Do we have any say even if we have no connection to the country, and have never owned any part of it?" Lathrop asked. He said the class has addressed ethical questions he's had about game parks and conservation since studying at the University of Cape Town in South Africa last year.

"What has most impacted me in this course, and what I'll carry with me into the future, is a new critical awareness for how I think and talk about animals," Lathrop said." It has been pretty amazing to really analyze what I think I know about the lives of animals, from the zoo to the factory farm.

"The best moments of the class," Lathrop continued, "have been the provocative questions proposed by Professor Dlamini that deliver a shock to our consciousness and imagination: Can we imagine a future without national parks? Have any of us ever actually seen a rhino?"

In his class, Dlamini challenges conventional thinking, but he also maintains a moral compass. While practices such as conservation can be done better, others such as poaching are inherently wrong. During a discussion of whether affluent Westerners can justifiably chastise poor African poachers, he cautioned: "I feel like we're suspending our own judgments here to the point where we're giving criminals a pass. It would be different if rhinos were killed for meat rather than their horn. Are we being too easy on the poachers?

"There is a need to review the philosophy underpinning the human relationship to nature," Dlamini said outside of class. "If I succeed in getting these students to do that, I think the class will have been a success."