The paradox of a veteran Republican addressing a university audience on a conservative plan to mitigate the effects of climate change was not lost on James A. Baker III as he spoke to a full audience in Princeton University's McCosh Hall on May 10.

"I realize that as a conservative Republican, I am something of a Daniel in the lion's den today," said Baker, a 1952 graduate of Princeton, former University trustee, and U.S. Secretary of State under President George H.W. Bush.

"I suspect that many of you here are Democrats. This is after all Princeton," he said, eliciting laughter from those who had come to hear him deliver the 2017 Taplin Environmental Lecture presented by the Princeton Environmental Institute. 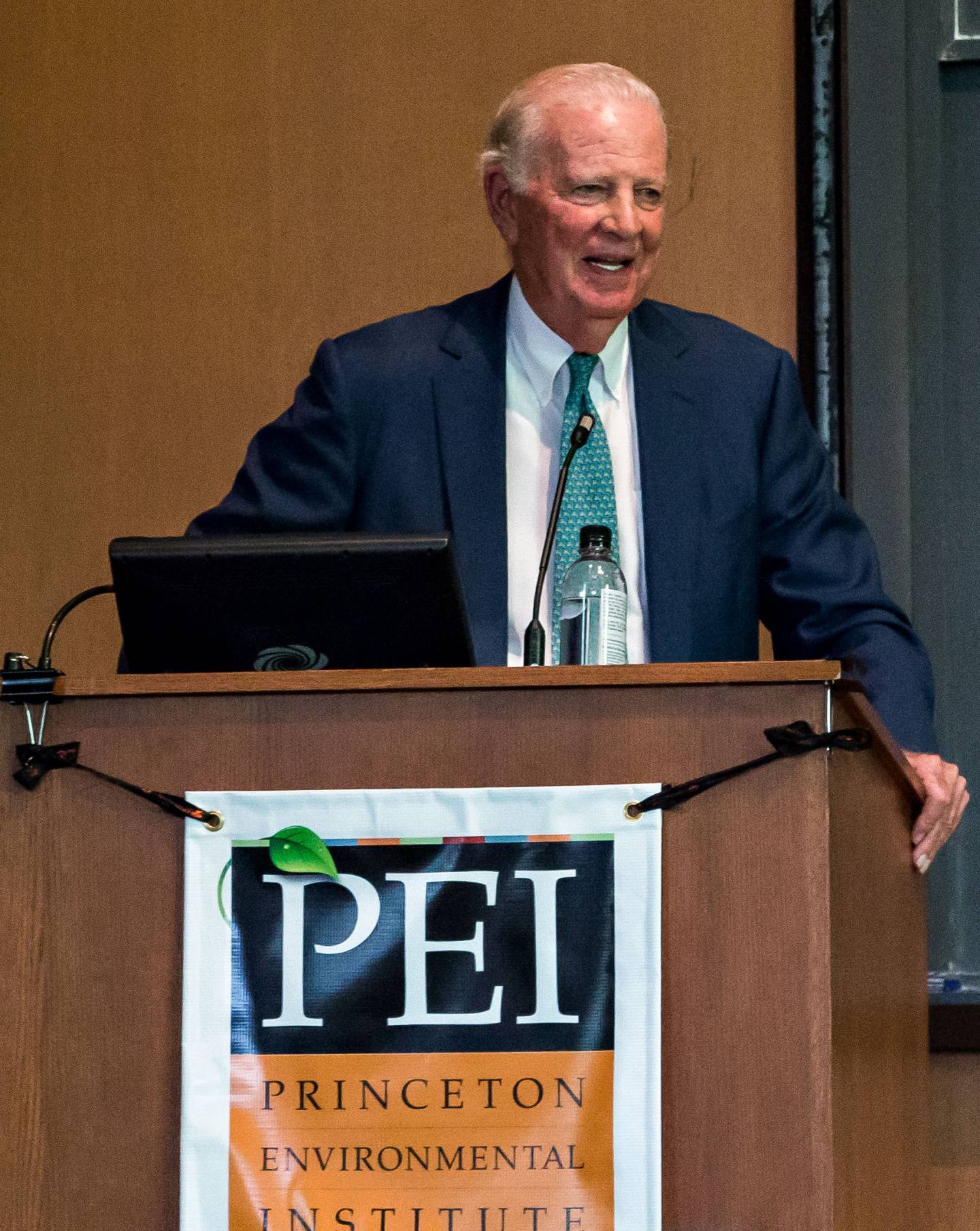 James A. Baker III (above), a 1952 graduate of Princeton, former University trustee, and the 61st U.S. Secretary of State, presented his speech, "A Conservative Approach to Climate Change," to a full audience in Princeton University's McCosh Hall on May 10. Baker and several prominent Republicans have developed a plan to provide Republicans with a legislative response to the growing call for climate-change action that aligns with conservative principles.

In his speech, "A Conservative Approach to Climate Change," Baker presented a plan he developed with several prominent Republicans to garner conservative support for curbing carbon emissions and curtailing the effects of climate change. The group, which includes former U.S. Secretary of State and 1942 Princeton graduate George Shultz and former U.S. Secretary of the Treasury Henry Paulson Jr., presented its plan to President Donald Trump in February.

Baker lamented how the virulent partisanship of American politics has prevented the United States from adopting an effective plan to prepare for the very serious effects of climate change — and the time to act is growing short.

"The real point I want to make here is that if we battle across partisan lines on the remedy to climate change, then there is an excellent possibility that nothing will happen," Baker said. "This country works best when the two sides of our polity can find middle ground on issues. I know that doing just that is very hard given our political environment in which many consider compromise to be a dirty word.

"As with so many other challenges confronting our country today, this hyper-partisan divide is keeping us from finding a way forward," Baker said. "On one side are many Democrats who tend to favor growth-inhibiting command-and-control regulations. On the other side are many Republicans who have forfeited the policy initiatives to those very Democrats by simply denying the science or in just looking the other way."

The four-pillar plan Baker and his colleagues developed is intended to provide Republicans with a legislative response to the growing call for climate-change action that aligns with conservative principles. The proposal calls for a gradually increasing carbon tax on manufacturers, extractive industries and other businesses. The proceeds from the tax would be passed along to Americans in the form of a quarterly dividend check, similar to Alaska's current system of rebating oil revenues to its citizens, Baker said.

The third pillar would provide tax rebates to American businesses that export to countries without — or with less stringent — carbon-reduction polices. At the same time, those countries would see a levy applied to their exports to the United States. (When later asked by an audience member how such a measure could be enforced, Baker said that access to the United States' vast consumer market would be a powerful motivator. "If they want unrestricted access to our market — which is the largest in the world — they have to go along," he said. "We say pay this levy or you can't sell your products here.")

The plan's fourth pillar calls for all government regulations related to carbon to be repealed. 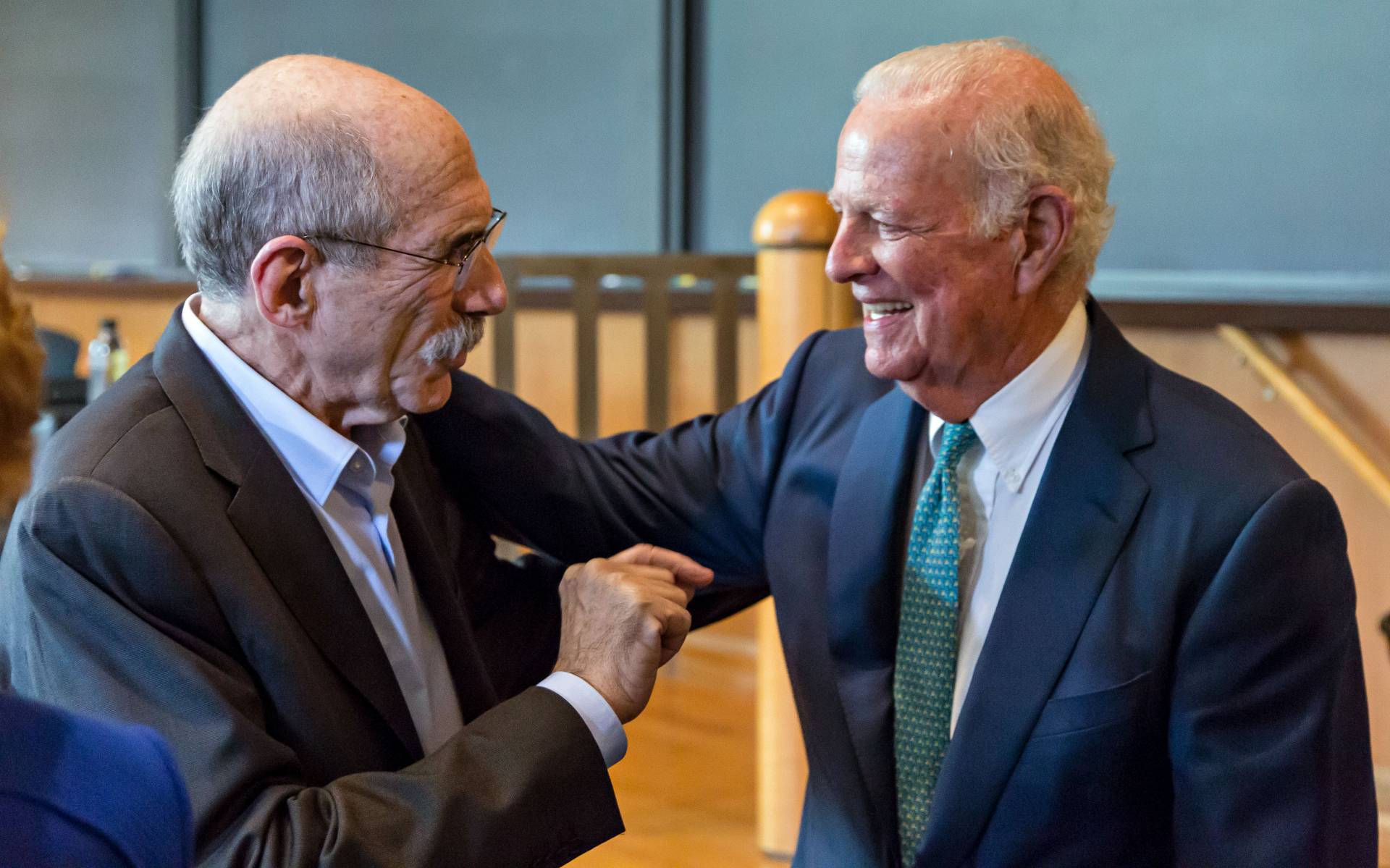 "As the national debate over climate change continues, the Republican Party can have a climate plan that showcases the full power of enduring conservative convictions and embodies the principles of free markets and limited government," Baker said.

The implementation of carbon taxes has seen support from both political parties and economists, Baker said. The tenuous nature of existing and past plans to curb climate change has resulted from the one-sidedness of their support, meaning they are usually scuttled when power changes hands, he said.

He described how treaties such as the 1997 Kyoto Protocol and the 2016 Paris Agreement left nations such as the United States to shoulder the responsibility of containing carbon while high-emitting countries such as China, India and Brazil were excused from taking action. At the same time, industries recoil at domestic regulatory plans such as President Barack Obama's Clean Power Plan, which the Trump administration has vowed to roll back.

"So, here we are, in search of an insurance policy or safety net that will be required if the concerns of many climate scientists turn out to be correct," Baker said. "Unfortunately, finding that safety net has been very difficult because of the partisan political split in this country over this issue. There may be a no more divisive issue in our polity." 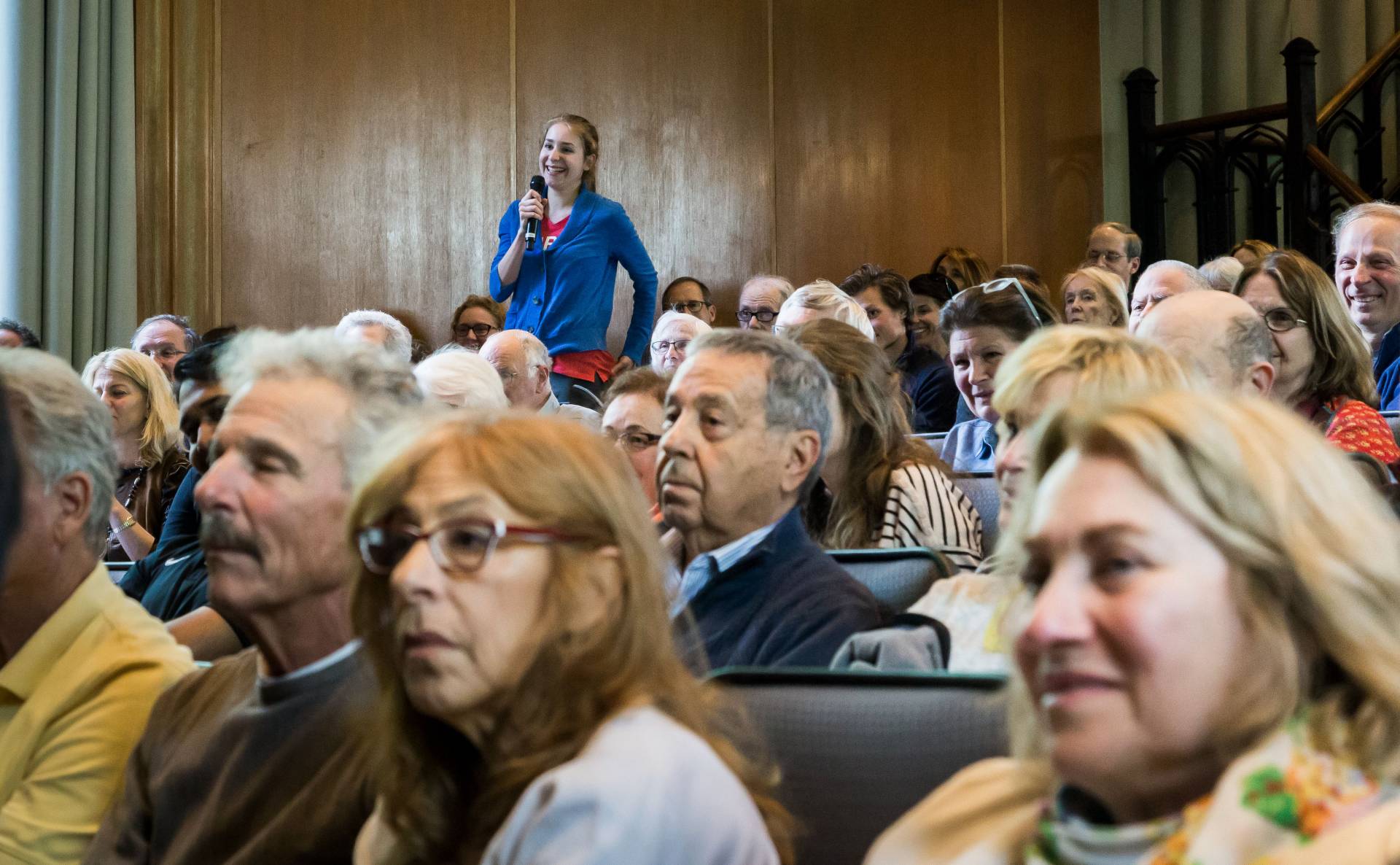 While taking questions from students and members of the community, Baker acknowledged that the greatest challenge facing the conservative climate plan will be convincing Republicans in control of the White House and Congress — many of whom vehemently deny the existence of climate change — to go along with it. But a climate plan that appeals to both political parties has the best chance of working, he said.

In introducing Baker, Princeton President Christopher L. Eisgruber said that, "since his graduation from Princeton, James Baker has truly helped to define what it means to be 'in the nation's service.'"

Aside from serving as Bush's Secretary of State from 1989 to 1992 — as much of Eastern Europe was transitioning out of communism — Baker also served as Bush's White House Chief of Staff from 1992 to 1993. Under President Ronald Reagan, Baker served as the Secretary of the Treasury from 1985 to 1988, and as White House Chief of Staff from 1981 to 1985. His public service began in 1975 when he was appointed Under Secretary of Commerce to President Gerald Ford. From 1976 to 1992, Baker led the presidential campaigns for Ford, Reagan and Bush in five consecutive elections.

Baker said he began speaking publicly about the need to address climate change in 2004. "I took notice 13 years ago when the CEOs of oil giants BP and Royal Dutch Shell started saying that the threat was real," he said. "And so, it made sense to me back then that the nations that emit the most carbon into the atmosphere should come together and try to find a solution. After all, I said, we have a duty to safely shepherd a clean environment for future generations."

In his opening remarks, Michael Oppenheimer, Princeton's Albert G. Milbank Professor of Geosciences and International Affairs and the Princeton Environmental Institute, reflected on the origins of the lecture series and said that Baker's speech was especially timely. Established in 1997 by Frank Taplin, a 1937 Princeton graduate and philanthropist for environmental causes and the arts, the Taplin Environmental Lecture provides a forum for prominent people to engage the public on pressing environmental issues.

"There is no greater need for such collaboration than on the issue of climate change and that makes Secretary Baker an especially appropriate choice," Oppenheimer said.

While taking questions from the audience, Baker acknowledged that, ironically, the greatest challenge facing his conservative climate plan will be convincing Republicans in control of the White House and Congress — many of whom vehemently deny the existence of climate change — to go along with it. "We think this plan will have more currency among Democrats than Republicans," he said. But "we know there are some people in the White House who look favorably upon this proposal. … At least they're talking about it."

He also clarified in response to a question that the tax would apply only to carbon-emitting businesses, not to individuals. "If you go out and build a fire with charcoal and roast some wieners," he said, to laughter from the audience, "there won't be a tax."