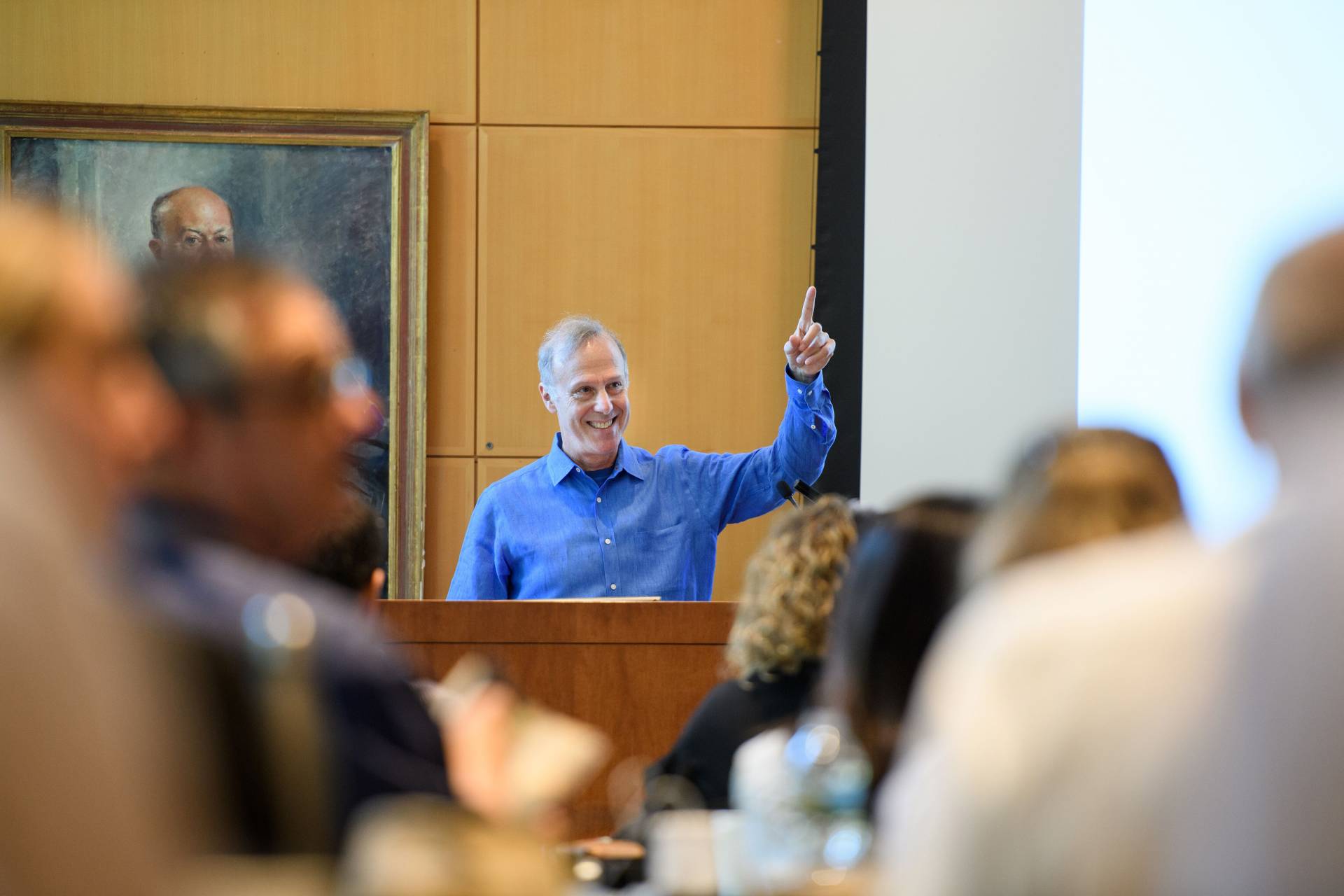 Derek Lidow, a 1973 Princeton alumnus and an entrepreneurship specialist at the Keller Center for Innovation in Engineering Education, speaks before participants at the conference, "Expanding Understanding of Business Creation: Adding More Ethnography into the Research Mix," held on campus Aug. 1-3. Lidow, who helped organize the conference, said he believed that ethnography could bring new insights into the success or failure of startups.

Three days of panel discussions, presentations and conversations at Princeton University's recent ethnography and entrepreneurship conference produced a rich stew of questions with no great consensus — just the way Derek Lidow wanted it.

Consensus often leads to mediocrity, said Lidow, an entrepreneur who teaches at Princeton's Keller Center for Innovation in Engineering Education.

The event, held Aug. 1-3 in the Friend Center, was co-sponsored by the Keller Center and the Ewing Marion Kauffman Foundation, which focuses on the study and promotion of entrepreneurship and is based in Kansas City, Missouri. 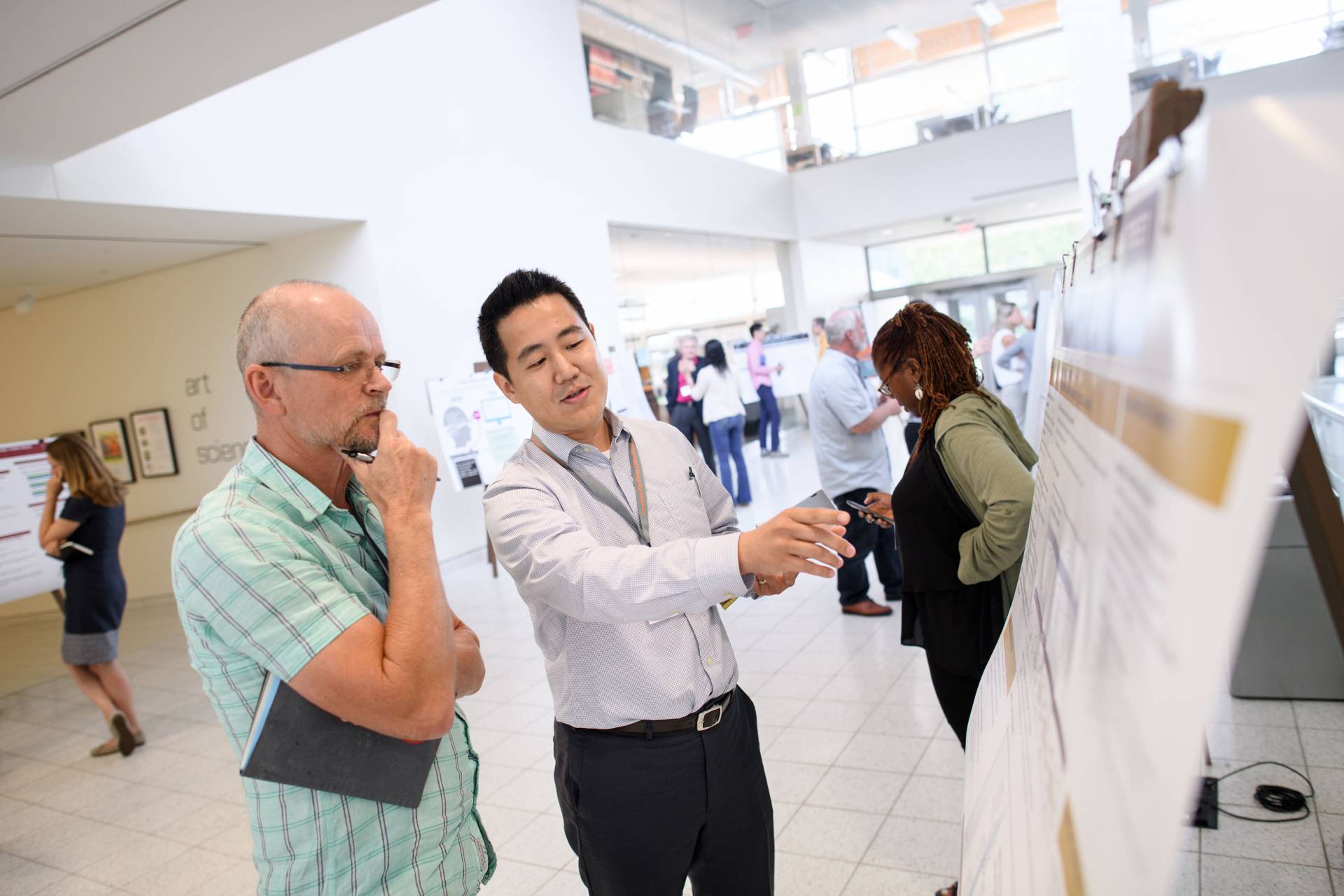 The conference explored ways that the study of cultures could help researchers better understand new business development. The event was organized by the Keller Center, the Ewing Marion Kauffman Foundation and the Department of Anthropology. Shown above, from left, are conference attendees Per Davidsson, a professor at Queensland University of Technology in Australia, and Suntae Kim, an assistant professor at Boston College. Behind them is Marlo Rencher, a vice president at Cleary University.

"Ethnographic field researchers don't 'study' people — we 'learn from' them, which means that our research involves lots of careful listening," said Rena Lederman, a professor of anthropology at Princeton and one of the conference organizers. "The main point of this conference was to change the face of entrepreneurship studies by advocating strongly for serious inclusion of ethnography. That is, research in which investigators spend time really getting to know social situations, communities or organizations — in this case, those relevant to business creation."

Working with leaders at the Kauffman Foundation, Lidow invited more than 50 researchers — sociologists, anthropologists, entrepreneurship specialists and journalists — to discuss how research can enhance the study of entrepreneurship.

Multitudes of startups across the country have failed within the past decade, said Lidow, and there is little explicit research to explain why. Lidow wants to know if high-quality ethnography can inspire a better understanding of how businesses emerge and what allows new ventures to grow and thrive.

Ethnography, a qualitative study of cultures driven by observation and participation, was a favored tool for analyzing business strategies until 30 years ago, when data and quantitative methods took precedence. But data-driven research has, by this point, "stalled out" in terms of delivering new insights, Lidow said, adding that more qualitative research could fill in the gaps.

“Research by my colleague Paul Reynolds (honorary professor of economics, finance and entrepreneurship at Aston Business School in the U.K.)  shows that 17.8 million people in the U.S. are working on launching roughly 9.5 million businesses,” Lidow said. “Historically, the majority of startups fail."

Lidow added, "The failure rate is increasing despite the number of startups in the U.S. having fallen over the past two decades."

Lidow, who graduated from Princeton in 1973 with a degree in electrical engineering, sold his own startup company, iSuppli, in 2010. He said: "We do not know much about why startups fail. We hear lots of anecdotes but nobody has actually collected the facts in a consistent way.

"The current research doesn't help us understand what actions really help them succeed," he said. "That's the research we're talking about at the conference. Ethnography is a very potent tool for understanding group behavior."

In a broad statement of purpose, Mark Beam of the Kauffman Foundation asked during an opening panel discussion: "What is the new nature of entrepreneurship? What is the future of work?"

Panelists focused on areas such as field studies, the formal vs. the informal economy and public policy priorities. They discussed making distinctions on the kinds of startups often studied by researchers — from so-called "unicorns," valued at billions of dollars, to small community programs in the Peruvian highlands. Several scholars cautioned against ethnocentricity, the belief that one's culture is superior to others, which can create misleading assumptions.

A group of 13 postdoctoral candidates and lecturers from around the world presented their research one morning. Among them was U. Ejiro O. Onomake, a lecturer at the University of Sussex, U.K., whose anthropological work examines intercultural business relationships between Chinese and Nigerian entrepreneurs in Nigeria.

Maryann Feldman, program director at the National Science Foundation, headlined a panel on funding opportunities for ethnographers, while other panelists discussed the difficulty of studying emergent businesses while their stories are still unfolding. Many entrepreneurial narratives we read or hear about are muddied over time, with success mythologies displacing the story of what actually happened, panelists said.  Conversely, many startups fail before a researcher has a chance to detail the misguided steps.

"We need to have ethnographers embedded in those firms when they are beginning," said Howard Aldrich, the Kenan Professor of Sociology at the University of North Carolina-Chapel Hill. "When you study firms that are 10 to 15 years old, all the interesting things have happened already. Early on is a wonderful time to do field work, as you have an opportunity to watch these things unfold."

The culture of Silicon Valley, fueled by stories of the wild success of a few startups and periodically rocked by dysfunctional management structures, was also discussed in pointed terms. The popular view of startups as driven by difficult geniuses derives from these singular startups. They perpetuate misconceptions about how startups should be run. "We have some high-profile entrepreneurs who use atrocious management techniques to achieve transitory benefits and progress," Lidow said.

A key theme of the conference focused on translating ethnographic findings into information that is relevant for entrepreneurs and policymakers alike.

"Entrepreneurs don't know about clusters, they don't know about business ecosystems," said Leigh Buchanan, editor-at-large of Inc. Magazine. "They care about the stuff that is going to help their business survive the first five years, when a startup is most vulnerable. That’s what entrepreneurs would like to see addressed in policy."

Lidow said he hoped the conference would lead to increased communication between researchers and entrepreneurs, and an enhanced sense of the shared mission that could benefit entrepreneurship.

Additional support for the conference was provided by Princeton's Department of Anthropology.

University Administrative Fellows program prepares Ph.D.s for careers within and beyond academia

Class snapshot: The trouble with the truth