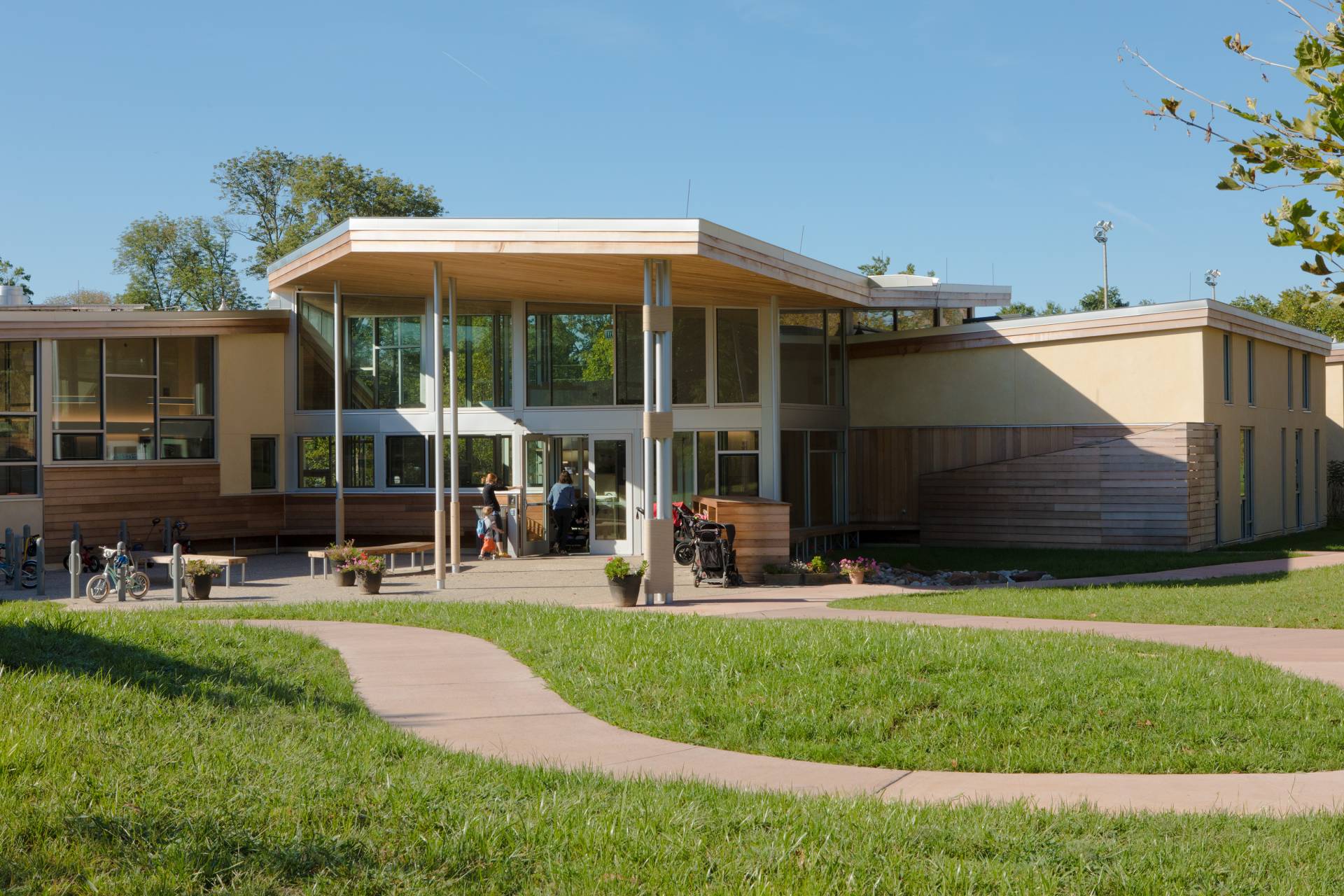 Parents bring their children into the new child care center, which opened Sept. 5 on the Princeton University campus. The new facility has room for up to 180 children, and will focus on infant and toddler care.

On Tuesday, Sept. 5, more than 150 children and teachers began their first day at the new Princeton Childcare Center, a state-of-the-art building about a mile southeast of Nassau Hall at 185 Broadmead St. on the Princeton campus.

“It’s really, truly a beautiful place, and we’ve been afforded an incredible adventure for our children here,” said Susan Bertrand, director of the University NOW Day Nursery, which runs the child care program in the new building. “[Tuesday] was our first day of school, and it just was dazzling. What a happy day for us!” 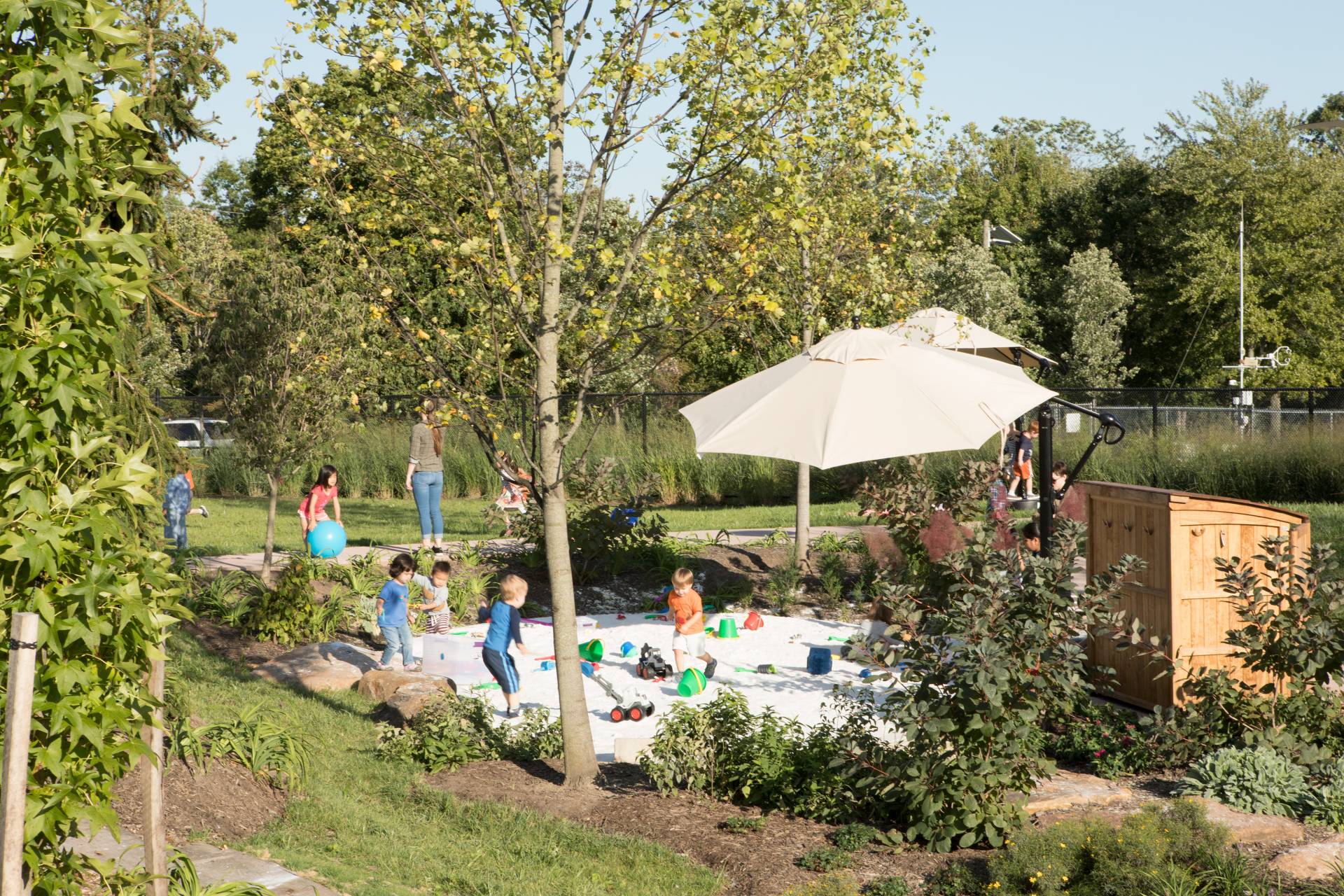 Children play in one of the playground's sandy, beach-like areas.

University working groups and task forces have called for affordable, on-campus child care for the children of students and employees since at least 2004's Task Force on Health & Well-Being. In response, the University created child care assistance programs for employees (ECCAP) and students (SCCAP), partnered with Bright Horizons to provide back-up child care and then built the spacious new educational center.

“It’s all about learning through play,” said Linda Nilsen, the assistant vice president for human resources at Princeton. “You want the children to explore and learn through experience, [so] we have to ensure that we provide all these opportunities for them in the landscape and in the building.” 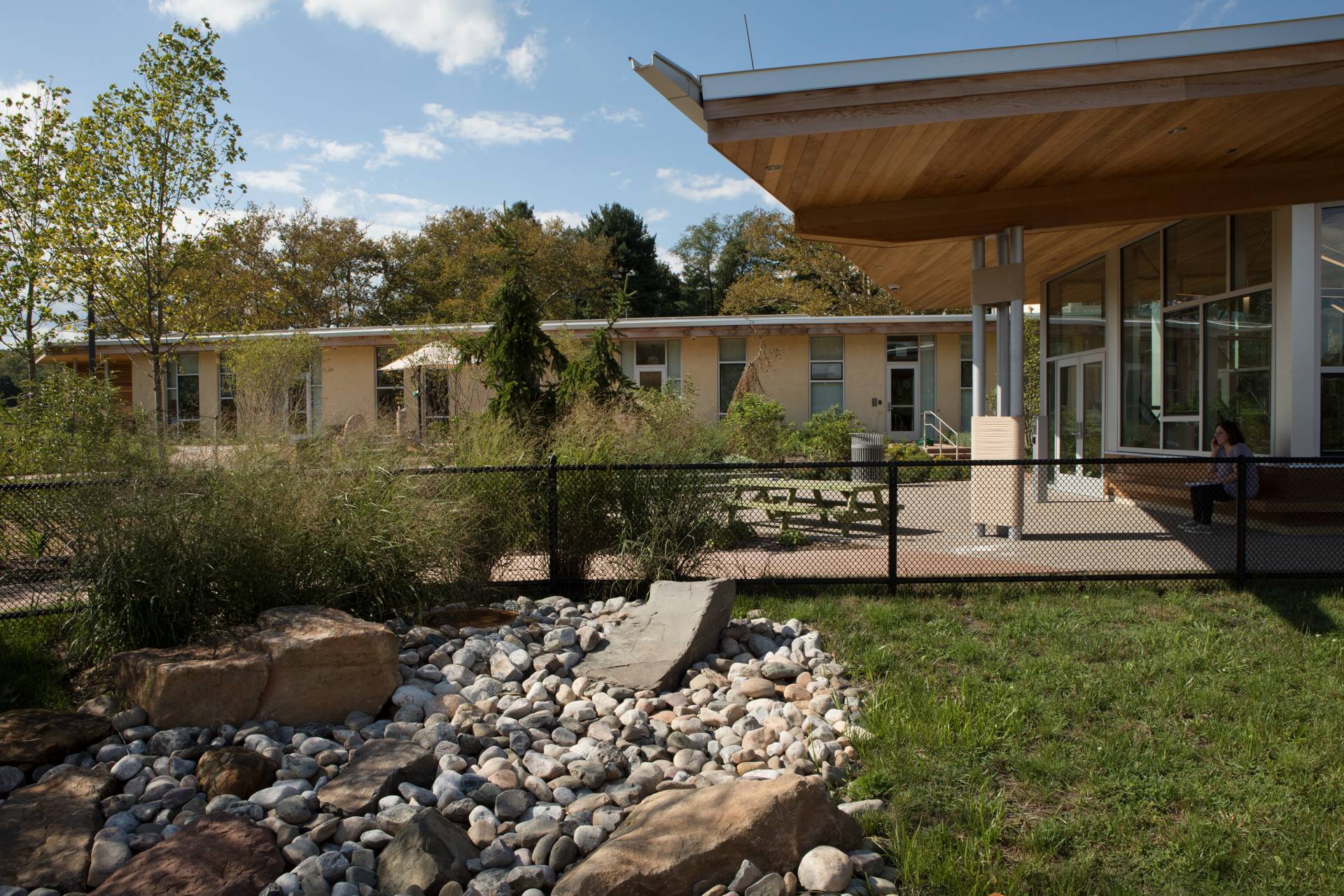 Gutters carry water to several overhangs around the playground, including this one, where children can watch rainwater fall freely onto the rocks below.

The kitchen, she said, shares a half wall with the multi-purpose room so little ones can observe the steps involved in cooking and baking the food they eat each day. Similarly, children will learn about the building’s many green features, including solar panels, super-insulated walls, low-flow plumbing and storm-water management.

The water runoff system interacts directly with the children’s play space. At several spots along the edge of the playground, gutters channel rain down onto rocks so children can watch gravity at work in the water cycle. The playground also includes native grasses, flowers and trees selected to attract birds and butterflies and let the children immerse themselves in the changing seasons.

“We have immediate access to the playground, being on one level, which really extends our learning environment — [it] makes the environment our ‘third teacher,’” said Bertrand. “The inside and outside become a connected environment, a place to learn and play.”

In one classroom, she said, preschoolers are discovering that monarch butterfly caterpillars are “eating machines, just like [Eric Carle’s classic children’s book] 'The Very Hungry Caterpillar.' The children are physically watching them eat milkweed every day, and those butterflies will be put on our playground and released there — and hopefully pollinate our plants!” 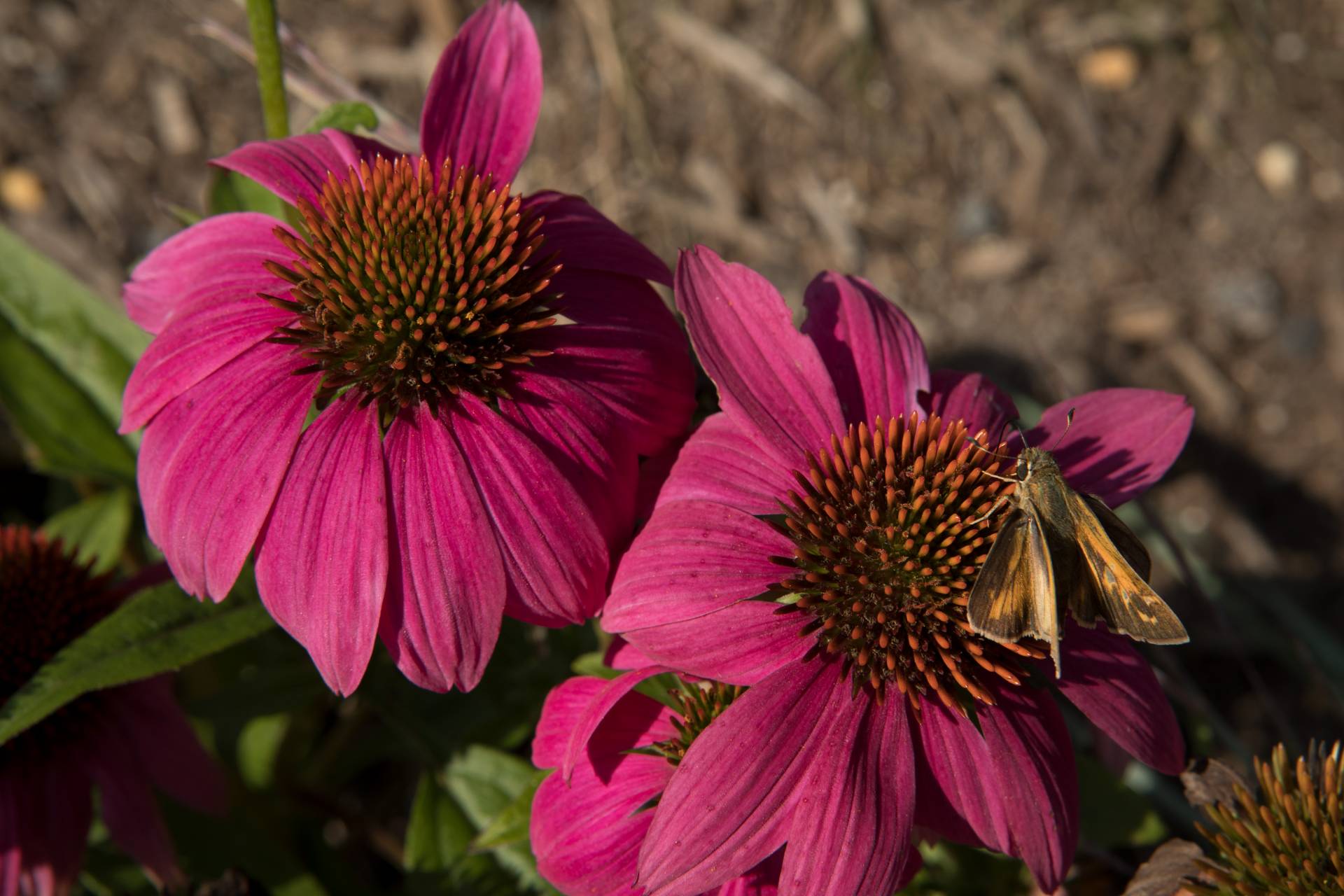 A skipper butterfly visits a purple coneflower, one of many planted in the playground to attract local butterflies.

So far, 11 of the building’s 15 classrooms are in use, and all will be full by September 2018, Bertrand said. “We made a decision to not open to full capacity,” she said. “We wanted a gradual ramp-up to get settled.” They announced 130 spots open for this academic year, and 126 were filled before the doors opened.

For almost 50 years, UNOW has operated out of the brick building next door to the new center, which it shared with the University League Nursery School (ULNS). In 2016, ULNS relocated to the Joan Levin Early Childhood Center, on the grounds of the Jewish Center at 457 Nassau St. Both UNOW and ULNS are accredited by the National Association for the Education of Young Children (NAEYC).

Bertrand said UNOW has committed to maintaining teacher-child ratios that meet or surpass NAEYC and New Jersey standards. In the new building, designed by Maryann Thompson Architects, every room has three or four teachers, allowing a child-teacher ratio of 2-to-1 for infants up to 11 months old, gradually shifting to a 5-1 ratio for the oldest preschoolers.

Parents enrolling their children at the Princeton Childcare Center can choose between three options: a 12-month program, an academic-year program that includes care from September through June, or an in-between plan that can include either half of the summer. 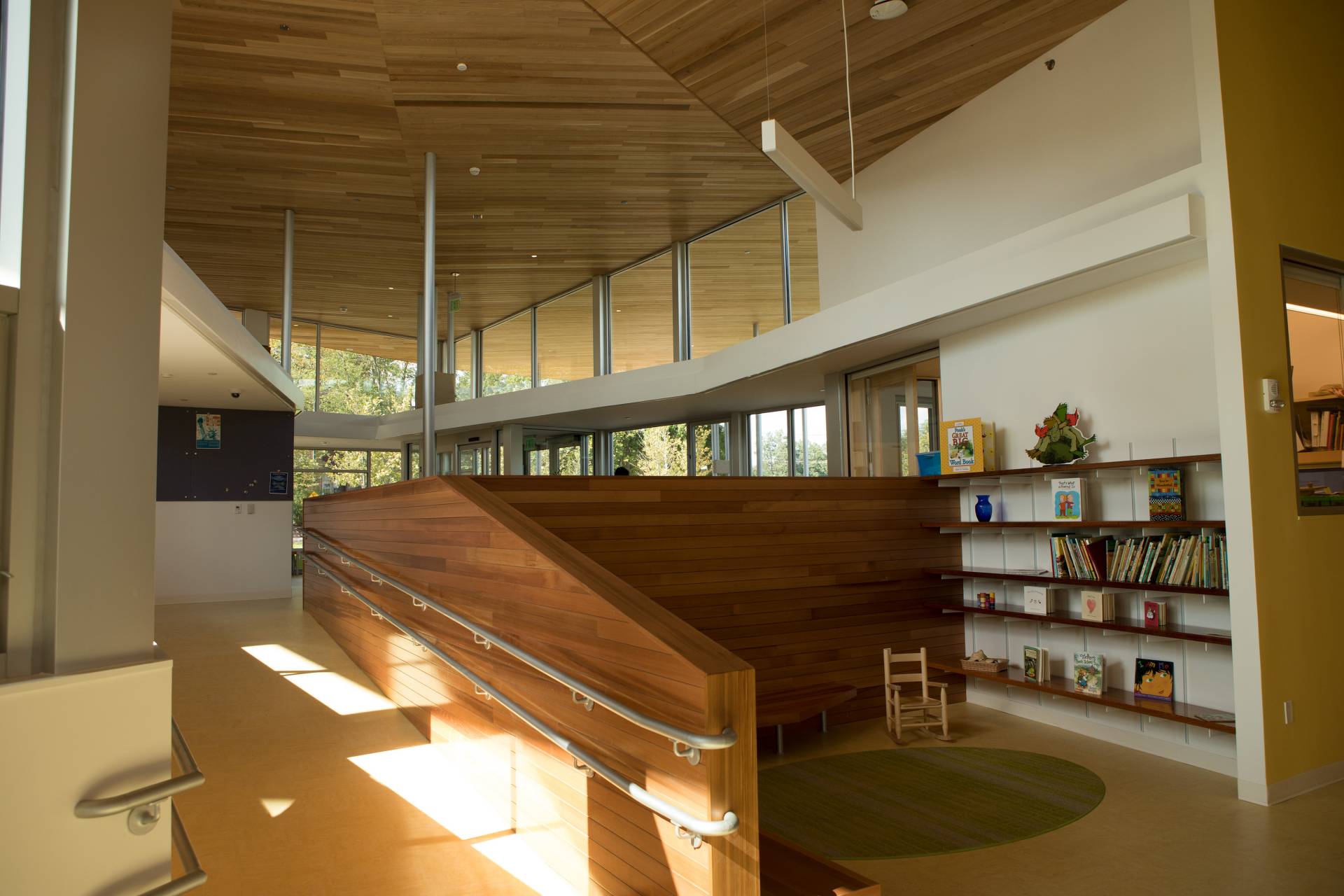 A small library adjoins the main lobby, where overhung windows are designed to allow winter light in but keep summer sun out.

The grand opening represented the culmination of years of planning and work, noted Joan Girgus, an emerita psychology professor who has chaired or worked on several task forces and working groups related to family life and child care during her 40 years at Princeton.

“Consistently, in all of these bodies and reports and recommendations, the call has been for more infant and toddler child care,” she said. “People were just screaming for help, I don’t know how else to put it. The one thing we heard — everybody heard, over and over again … was a drumbeat for more child care, especially for infants and toddlers.”

Girgus recalled a 2005 speech in which then-University President Shirley M. Tilghman spoke about the challenges of recruiting, retaining and advancing women in science. Tilghman said, “The first step, to paraphrase the political strategist James Carville, is to recognize ‘It’s daycare, stupid!’ — daycare that is both accessible and affordable.” Immediately afterward, Girgus said, Tilghman “came back to campus and appointed our task force.” A new facility was soon slated for construction, but the Great Recession of 2008 put it on hold.

“It really is just amazing,” said Girgus, who was given an early tour of the facility. “After all these many years of hard work and planning — and the many different people who have worked to make sure that there is adequate child care on campus for the people who work and study at Princeton — after all these years, to see this amazing child care center come to life is just fantastic.”