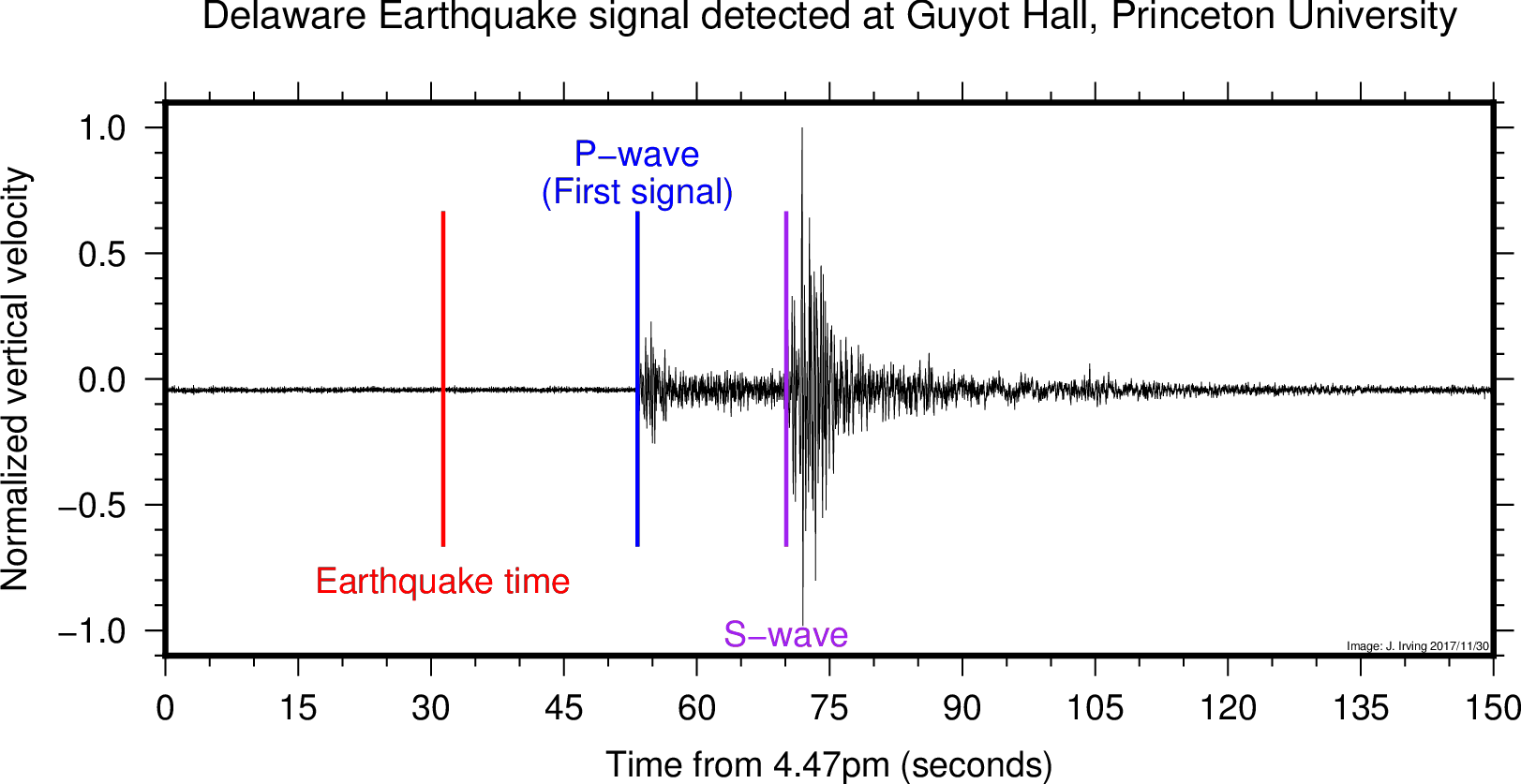 Thursday’s Dover, Delaware earthquake was widely felt on campus. It was also recorded by seismologists in the Department of Geosciences using a seismometer in the basement of Guyot Hall. In this image, the red line corresponds to when the earthquake happened, the blue line to the first seismic waves arriving and the purple line to the arrival of shear waves.

An earthquake emanating from Delaware that shook the East Coast on Thursday from New York City to Washington, D.C., produced tremors that were felt at Princeton University campus buildings including Nassau Hall. Seismologists at Guyot Hall recorded the unusual event.

Other campus buildings where the tremors were felt included Morrison Hall, New South, Stanhope Hall and the Arts Tower at the Lewis Arts Complex. Tremors were also felt off campus in University offices at 693 Alexander Road.

University officials checked buildings where the tremors were felt and found no sign of damage. No one was injured.

The U.S. Geological Survey reported the earthquake at 4:47 p.m.

Seismologists in the Princeton Department of Geosciences recorded the quake using a seismometer in the basement of Guyot Hall.

"We’re roughly 90 miles from the earthquake, which the U.S. Geological Survey is currently classifying as a magnitude 4.4, 6 miles deep and 6 miles from Dover, Delaware," said Jessica Irving, an assistant professor of geosciences. "Seismic waves propagated approximately 90 miles and their first arrival was detected starting 22 seconds after the earthquake. The strongest shaking was caused by waves which took around 40 seconds to reach campus.

"The shaking we experienced on campus was likely to be due to the larger amplitude later seismic signals," said Irving.

Irving explained that because of the geological properties of the eastern United States, people can often feel shaking at a greater distance than from an earthquake than people on the West Coast.

"Not everyone on campus felt the shaking, and this is normal — it’s easier to feel shaking while stationary," Irving noted. "In Guyot Hall seismologists sitting down felt the earthquake, but others out running on campus noticed nothing."

Irving said she and Professor of Geosciences Frederik Simons work with the Guyot Hall seismometer. "We advise undergraduate research students on projects using the data we collect. We, and our students, are able to observe both distant earthquakes and those closer to home, as well as other events like nuclear tests."

She added that Delaware is not very seismically active. The biggest earthquake in the Delaware Geological Survey’s records was in 1871 and caused stronger shaking than reported there Thursday.