By applying new data and Princeton’s supercomputers to the classic question of what lies beneath our feet, Princeton seismologist Jessica Irving and an international team of colleagues have developed a new model for the Earth’s outer core, a liquid iron region deep in the Earth. 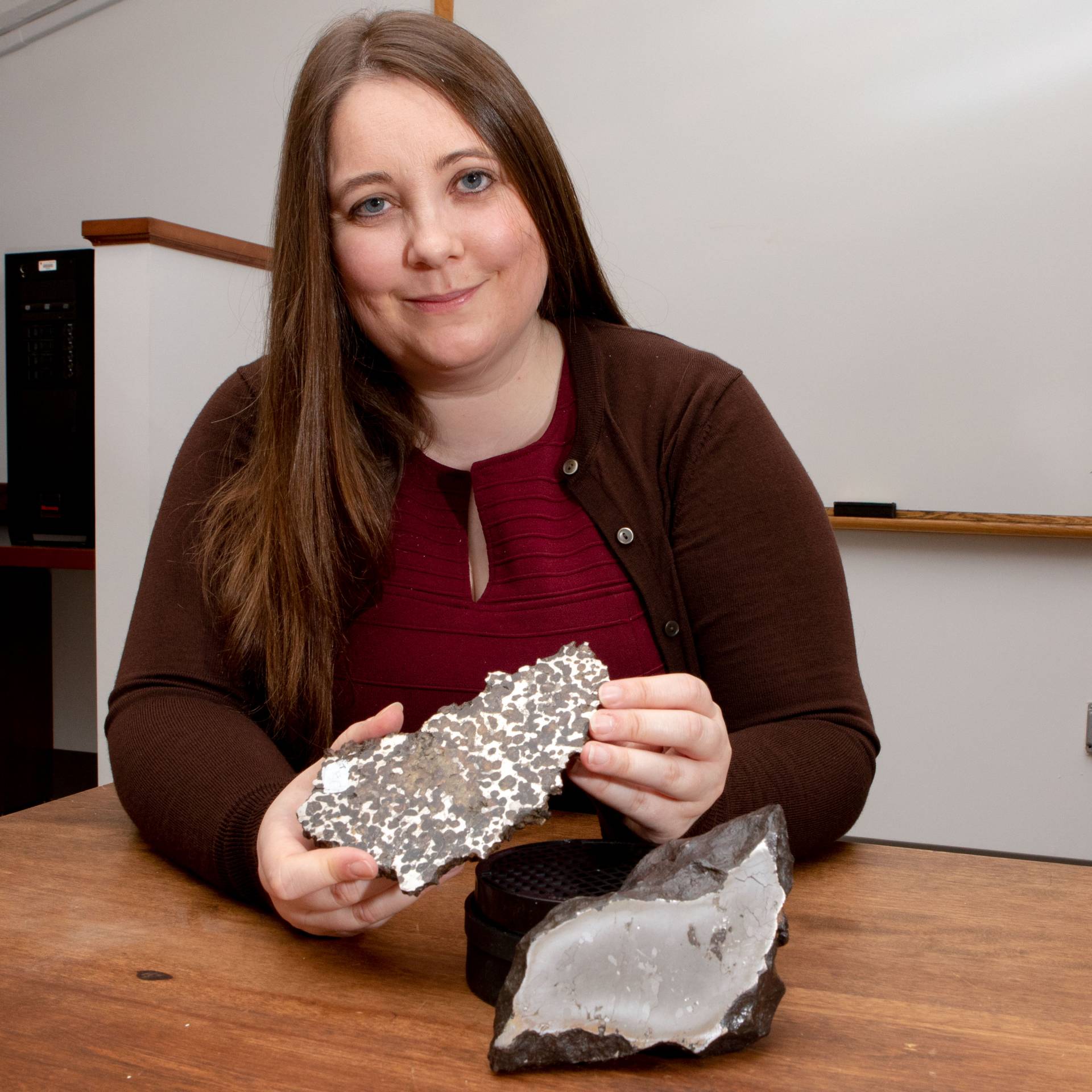 Princeton seismologist Jessica Irving, an assistant professor of geosciences, sits with two meteorites from Princeton University’s collection that contain iron thought to be from the cores of planetesimals. We have no samples of Earth’s own core to study, so Irving uses seismology to investigate the deepest regions of the planet, recently developing a new model for the Earth's outer core.

“The model we have produced, EPOC — Elastic Parameters of the Outer Core — is going to be the background model, the one thing that underlies everything else,” said Irving. The researchers describe EPOC as an outer core update of the existing Preliminary Earth Reference Model (PREM), a model of how fundamental Earth properties vary with depth, which was developed almost 40 years ago.

The key data in the research came from “normal modes,” which are standing waves that can be measured after the very largest earthquakes, typically magnitude 7.5 or higher. Unlike the body waves and surface waves that most seismologists study, normal modes are “the vibration of the whole Earth at once, which is kind of an amazing thing to think about,” Irving said. “We could say that the Earth ‘rings like a bell,’ at characteristic frequencies.”

“PREM is a venerable, very simple, well-regarded model, but it can’t represent any small-scale structures,” Irving said. “We thought, ‘Can we make a simple model, with even fewer parameters than PREM, that does the job just as well?’ It turned out we could make a model that does the job much better.”

For one, EPOC reduces the need for a “complicated little layer” at the boundary between the core and the mantle, she said. Researchers in recent decades had found discrepancies between the PREM-predicted body wave velocity and the data they were finding, especially at the top of the core, and some had argued that there must be an anomalously slow layer hidden there. They debated how thick it should be — estimates range from 50 to 300 miles — and exactly what it must be composed of.

Her team’s model doesn’t offer any more specifics than PREM, Irving said, “but we suggest that because EPOC fits the data better, maybe you don’t need this little layer.” And additionally, it provides information about the material properties of the outer core.

The outer core is vitally important to the thermal history of the planet and its magnetic field, said Irving, but “it’s not tangible. We can’t show you a rock from the outer core. But at the same time, it is such a huge section of our planet. The core has roughly 30 percent of the mass of the planet in it. The crust is insignificant by comparison. There is so much that we don’t understand about the deep earth — and these aren’t even the complicated properties. We’re just looking for the very slowly varying bulk properties.”

To create their model, Irving and fellow seismologists pooled their skills. Cottaar had experience with equations of state — the physics explaining the connections between temperature, pressure, volume and other fundamental characteristics — and Lekić was fluent in Bayesian techniques, a probabilistic approach that helped the team sift through countless possible models and find the most likely ones. And because of her background with normal mode seismology, Irving knew how to work with the newly updated dataset.

“So all three of us were seismologists with different specialized skill sets, and we liked to have coffee at breakfast together,” Irving said. “It’s so much fun doing science with friends.”

The researchers fed the equations of state into Princeton’s Tiger supercomputer cluster to generate millions of possible models of the outer core. “Every six seconds we created a new model,” Irving said. “Some we rejected because they looked wrong. We have scientific tests for ‘wrong,’ for models that say things like, ‘The mass of the Earth should be twice what we think it is.’”

The team then took the best of the models and used them to predict what frequencies the whole Earth would shake at after a massive earthquake. The researchers compared the measured frequencies of normal modes to the predictions from their models until they found their preferred model.

When teaching about normal modes, Irving uses the metaphor of two bells, one of brass and one of steel, both painted white. “If you hit those bells, you’ll get different notes out of them, and that will tell you that you have different materials in there,” she said. “The exact frequencies — the exact pitch that the Earth at shakes after these very large earthquakes — depends on the material properties of the Earth. Just like we can’t see through the paint on the bells, we can’t see through the planet, but we can listen for the pitch, the frequencies of these whole-Earth observations, and use them to make inferences about what’s going on deep in the Earth.”

“Seismically determined elastic parameters for Earth’s outer core,” by Jessica Irving, Sanne Cottaar and Vedran Lekić, published June 27 in Science Advances, DOI 10.1126/sciadv.aar2538, was supported by NSF grants EAR1644399 (to Irving) and EAR1345082 (to Lekić) and the Packard Foundation. The work started over coffee at the 2016 CIDER workshop at the Kavli Institute for Theoretical Physics at the University of California-Santa Barbara, which was supported by the NSF FESD-1135452.