By Yasemin Saplakoglu for the Office of the Dean for Research

Despite their charm and allure, diamonds are rarely perfect. They have tiny defects that, to assistant professor Nathalie de Leon, make them ever so appealing. These atom-sized mistakes have enormous potential in technologies for high-resolution imaging and secure communication lines. 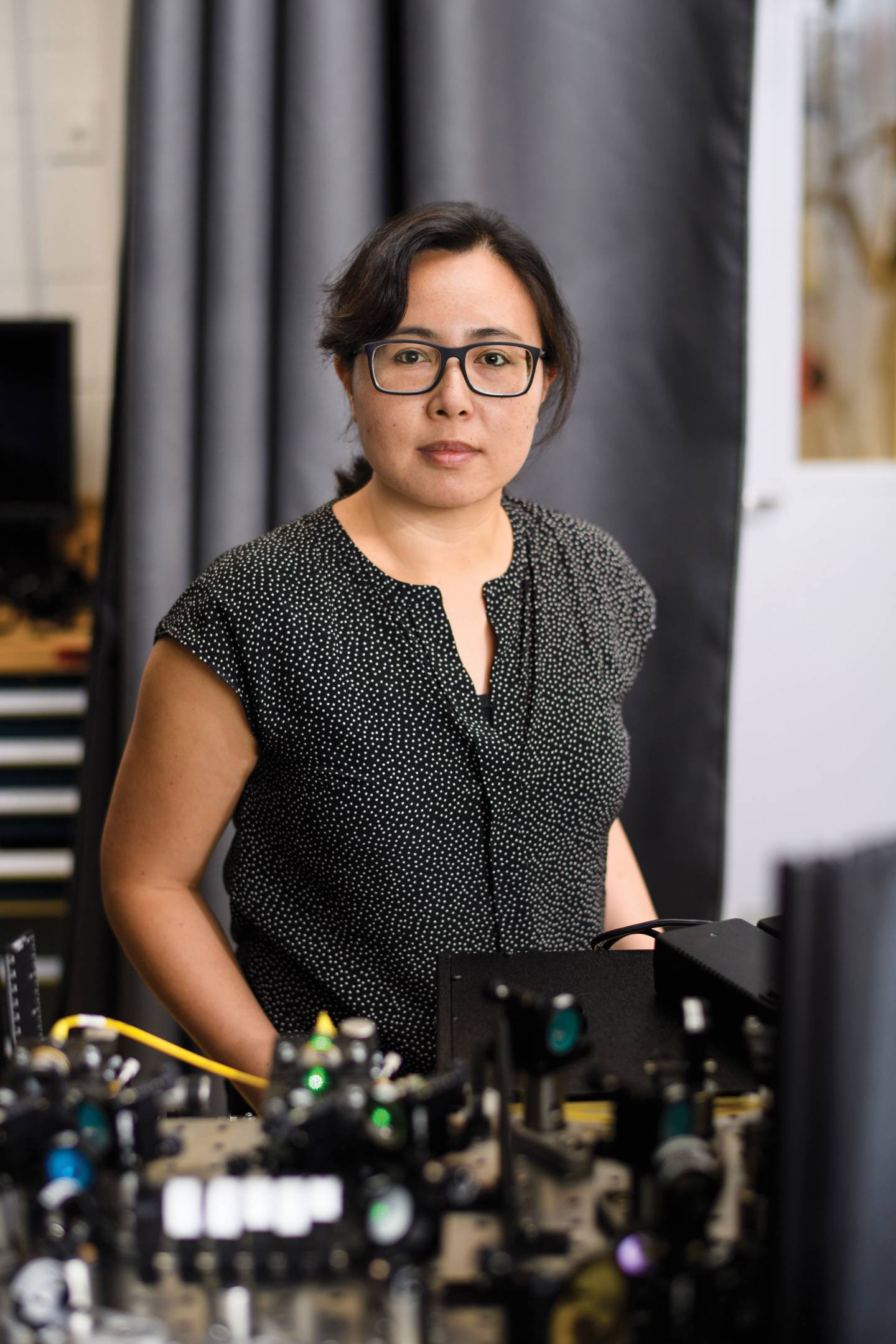 “Historically, people called these defects ‘color centers’ because when you shine light on a diamond you see a bunch of pretty colors come back,” said de Leon, who is appointed in the Department of Electrical Engineering. She wants to harness the properties of these defects to image molecules and proteins.

A diamond is a tightly knit lattice of carbon atoms. By kicking out one of the carbons and adding a nitrogen atom nearby, the researchers can create a defect known as a “nitrogen-vacancy color center.” The nitrogen atom and the dangling bonds around the missing carbon atom form a sort of molecule within a small area of the diamond lattice. This area of the diamond acts like a verdant oasis in the middle of a desert, displaying very different properties than the rest of the material.

De Leon is working on using a nitrogen-vacancy color center near the surface of a diamond to capture images of molecules. The approach takes advantage of a property of the defect known as “spin,” which is analogous to the momentum of a spinning top. These spins interact with the molecule’s magnetic field, which varies from one part of the molecule to another. The signals from these interactions can be collected and processed to make an image that is very high in spatial resolution — high enough to image a single molecule of DNA.

For this to work, the only signal emanating from the surface of the diamond has to be the one from the color center. But that’s a difficult feat, as the moment the diamond is exposed to air, its surface atoms latch onto molecules floating around. Further, cutting or polishing one of the hardest materials in the world brings other unwanted defects to the surface.

All of these extra signals cloud the measurement. In fact, when researchers try to remove the unwanted defects from an initial polish, they inadvertently create more defects that again need to be removed. “You have a mouse problem, so you release the cats, and you have a cat problem, so you release the dogs. It just keeps going,” de Leon said. Finding ways to improve the diamond surface is an ongoing area of research, and de Leon is hopeful that a combination of chemical treatments and a high-purity environment might do the trick. 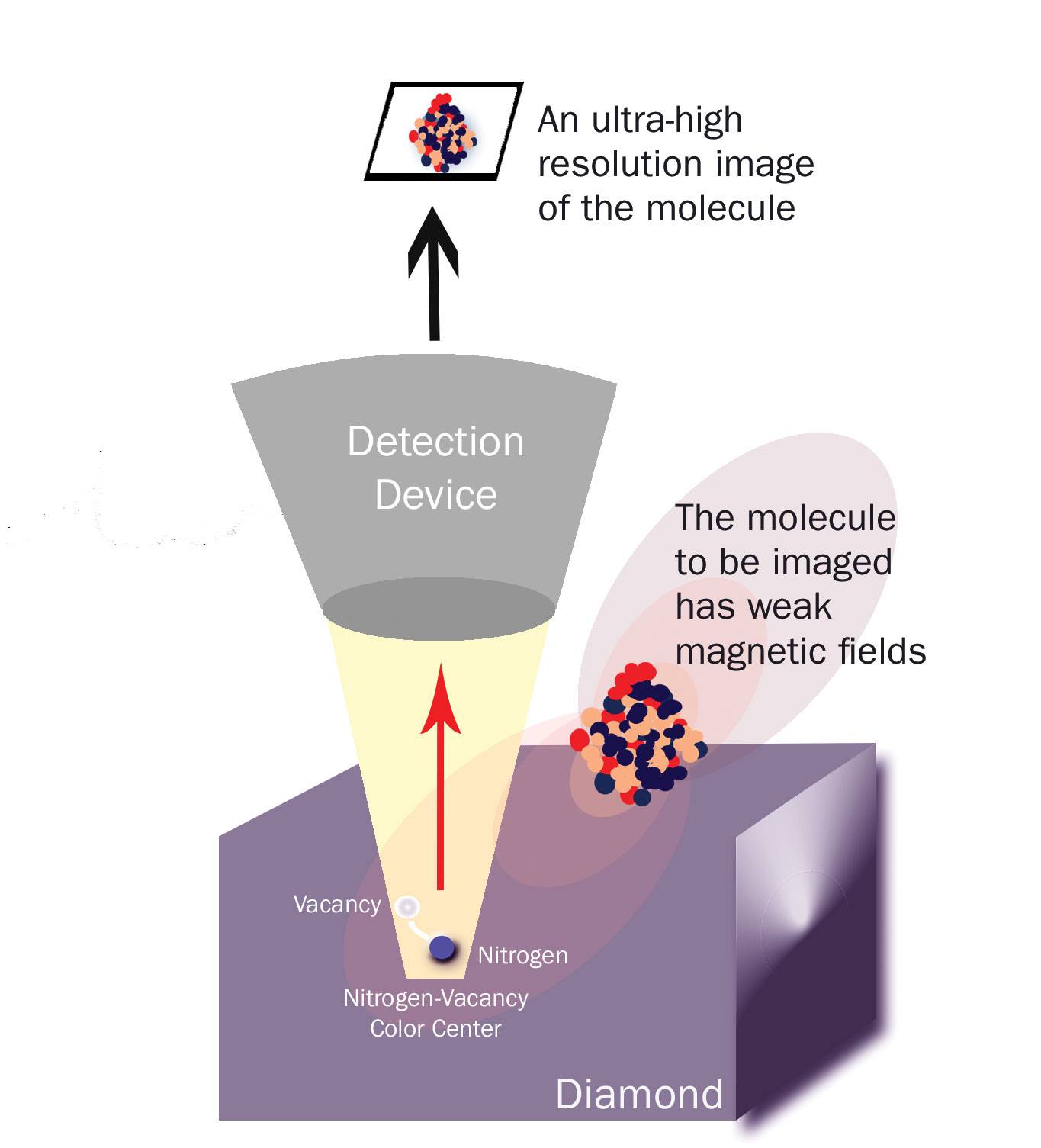 Researchers led by Nathalie de Leon are turning diamonds into devices that can image single molecules. The device uses a defect in the crystal structure called a nitrogen-vacancy color center. When disrupted by the molecule’s faint magnetic field, the defect gives off red signals that can be used to construct an ultra-high resolution image of the molecule.

While these color centers may eventually serve as sensors for biological applications, they can also be the basis for new communication networks — ones that would make eavesdropping impossible.

In quantum communication systems, an eavesdropper would not be able to read a message without immediately altering its state, thus exposing the attempt to pry into the message. It would also be impossible to copy a quantum message.

Making the signals robust enough to travel long distances has stalled the development of quantum technologies, de Leon said. She is working to build a “repeater” that can boost the signal and forward it through a cable until it reaches its destination. This would require a material capable of making quantum memories. The material would store and recover the original signal to propel the signal through the cables.

“What we are looking for is the heart of this quantum repeater,” de Leon said. Her team recently discovered a candidate for such a heart: a defect within a diamond in the form of a large silicon atom hovering between two holes in the lattice.

It turns out this defect has very good charge and light properties, two necessary ingredients for a good quantum memory. The defect is also more resilient to interference by electric fields from the environment than other approaches.

De Leon, who arrived at Princeton in2016 after completing her Ph.D. and a postdoctoral stint at Harvard University, is now exploring how to make this quantum repeater. Her work is supported by the National Science Foundation, the Air Force Office of Scientific Research and the Alfred P. Sloan Foundation.

“Nathalie came to Princeton with materials knowledge and combined it with physics,” said Stephen Lyon, a professor of electrical engineering who directs Princeton’s Program in Engineering Physics. “There are all these quantum things that people want to do and in the end everything depends on materials — it all comes down to how you get the material to do what you want.”

De Leon wonders whether quantum communication can be made secure and robust before our current encryption schemes succumb to security challenges.

She hopes the hearts of quantum repeaters will start to beat before that happens.