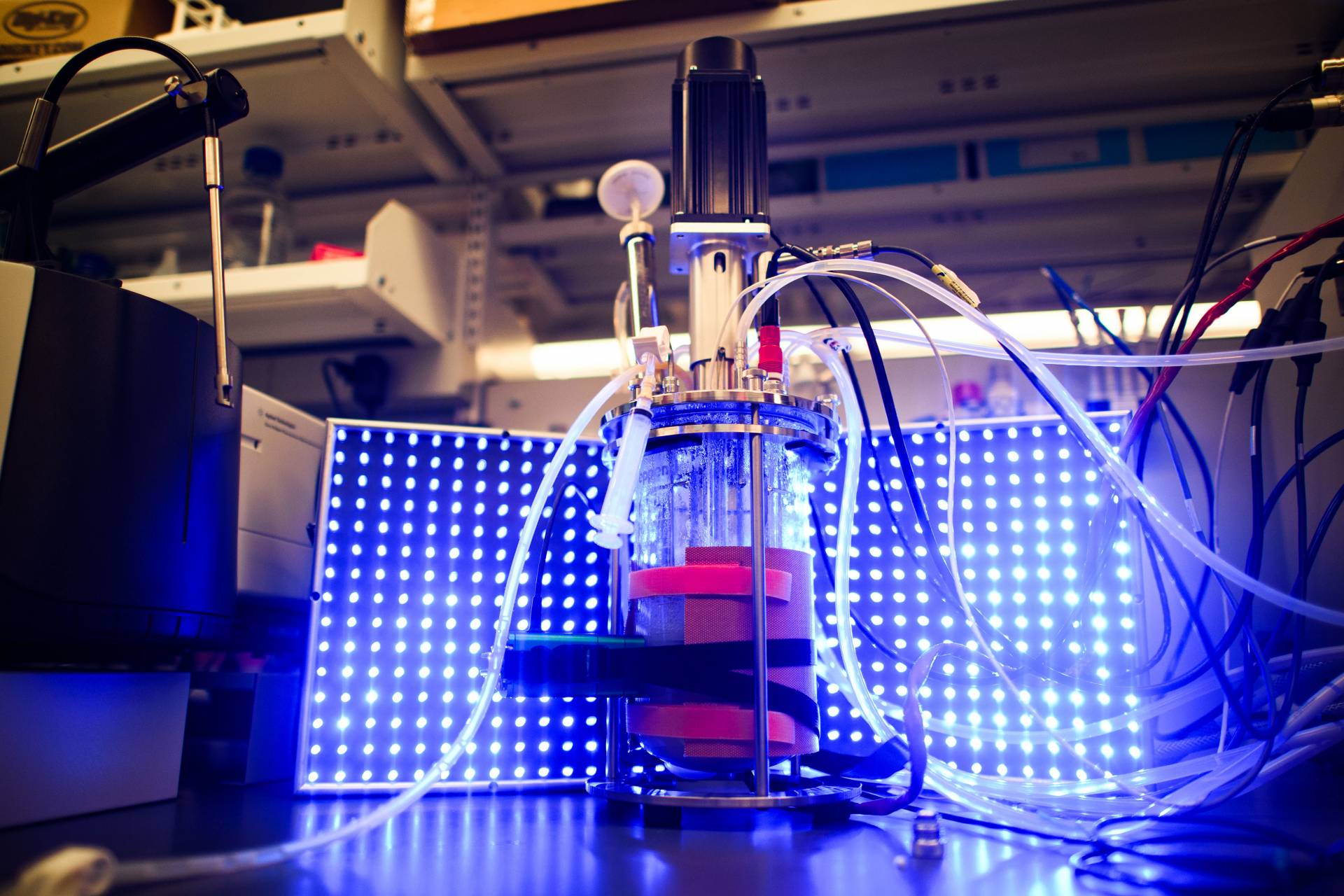 Lonnie Shekhtman for the Office of Engineering Communications

Scientists have recently learned how to use light to control specific groups of neurons to better understand the operation of the brain, a development that has transformed areas of neuroscience. Researchers at Princeton University have now applied a similar method to controlling the metabolism, or basic chemical process, of a living cell. In a series of experiments, they used light to control genetically modified yeast and increase its output of commercially valuable chemicals. The results offer scientists a powerful new tool to probe and understand the inner working of cells. 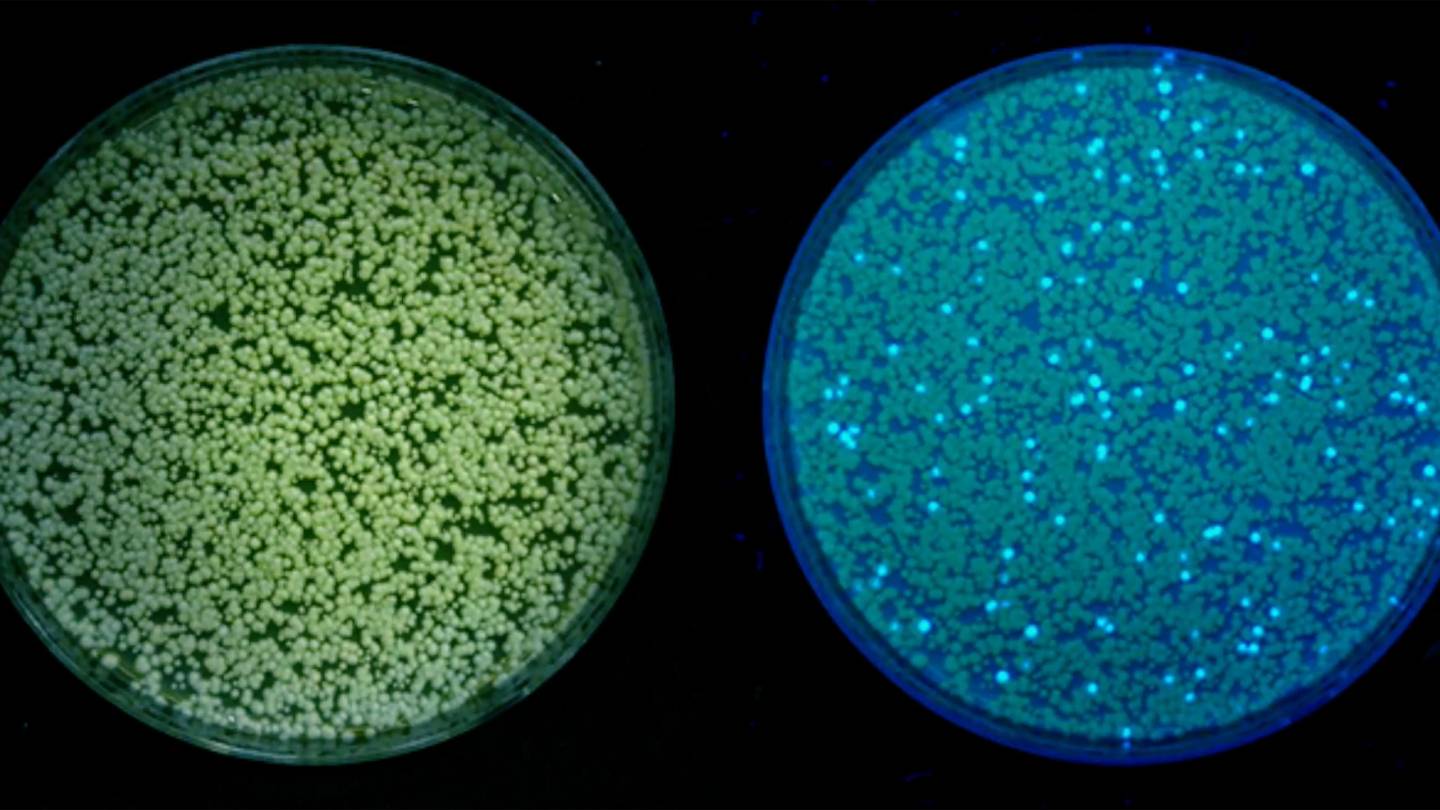 Inventor José Avalos, assistant professor of chemical and biological engineering and the Andlinger Center for Energy and the Environment, and his team use light to enhance the production of biofuels, drugs and commercial chemicals in bioreactors, which contain microorganisms such as yeast that have been metabolically engineered to make biological products. The team uses a technology called optogenetics — involving light to control cellular processes — to turn yeast genes on and off at specific times to optimize the production of the desired chemical or product.

“This technique allows us to control the metabolism of cells in an unprecedented way,” said co-lead researcher José Avalos, an assistant professor of chemical and biological engineering and the Andlinger Center for Energy and the Environment. “It opens the door to controlling metabolism with light.”

Yeast has been used for centuries to make bread, wine and beer. Through fermentation, yeast cells transform sugar into chemicals that make bread rise and turn grape juice into wine. Using their new technique, the Princeton researchers have now used fermentation and genetically engineered yeast to produce other chemicals including lactic acid, used in food production and bioplastics, and isobutanol, a commodity chemical and an advanced biofuel.

Light played a key role in the experiment because it allowed the researchers to switch on genes that they had added to the yeast cells. These particular genes are sensitive to light, which can trigger or suppress their activity. In one case, turning on and off a blue light caused the special yeast to alternate between producing ethanol, a product of normal fermentation, and isobutanol, a chemical that normally would kill yeast at sufficiently high concentration.

The achievement of producing these chemicals was significant, but the researchers were intrigued by the development of light’s broader role in metabolic research.

“It provides a new tool with the ability to do sophisticated experiments to determine how metabolism works and how to engineer it,” Avalos said.

In a March 21 paper in the journal Nature, the researchers reported that they used light to increase yeast’s production of the chemical isobutanol as much as five times higher than previously reported levels in peer-reviewed studies The researchers used a genetically modified strain of the yeast Saccharomyces cerevisiae in the experiments.

Isobutanol is an alcohol used in products such as lubricants, gasoline and jet fuel replacements, and plastics. With good compatibility with gasoline infrastructure, isobutanol has properties that could make it a direct substitute for gas as a vehicle fuel. However, most attempts to create isobutanol biofuel have run into difficulties involving cost or scaling production to an industrial level. Although natural yeast fermentation produces isobutanol, it does so in miniscule amounts. Instead, yeast makes high volumes of ethanol (the alcohol in beer and wine) and carbon dioxide (a gas that makes bread rise).

“Yeast don’t want to make anything but ethanol; all their systems have evolved to do this,” said Evan Zhao, a Ph.D. student in Avalos’ lab and lead author on the paper. “This has been an age-old problem.”

The researchers sought to overcome this barrier. They managed to suppress the yeast’s evolutionary self-interest by genetically engineering it to produce large quantities of isobutanol. But they faced a major problem. Isobutanol is toxic to yeast and eventually kills yeast colonies that produce it in any significant quantity. The researchers predicted they could use a combination of genetic engineering and light to fine tune isobutanol production. Using their light-switch technique, the researchers set out to keep the yeast alive while maximizing isobutanol production.

The researchers started by putting a modified gene from a marine bacterium that is controllable by blue light into yeast’s DNA. They then used light to turn on a chemical process that activates enzymes that naturally allow yeast to grow and multiply by eating glucose and secreting ethanol. But while those enzymes are active, ones that influence the production of isobutanol can’t work. So the team turned to darkness to switch off the ethanol-producing enzymes to make room for the expression of their competitors. 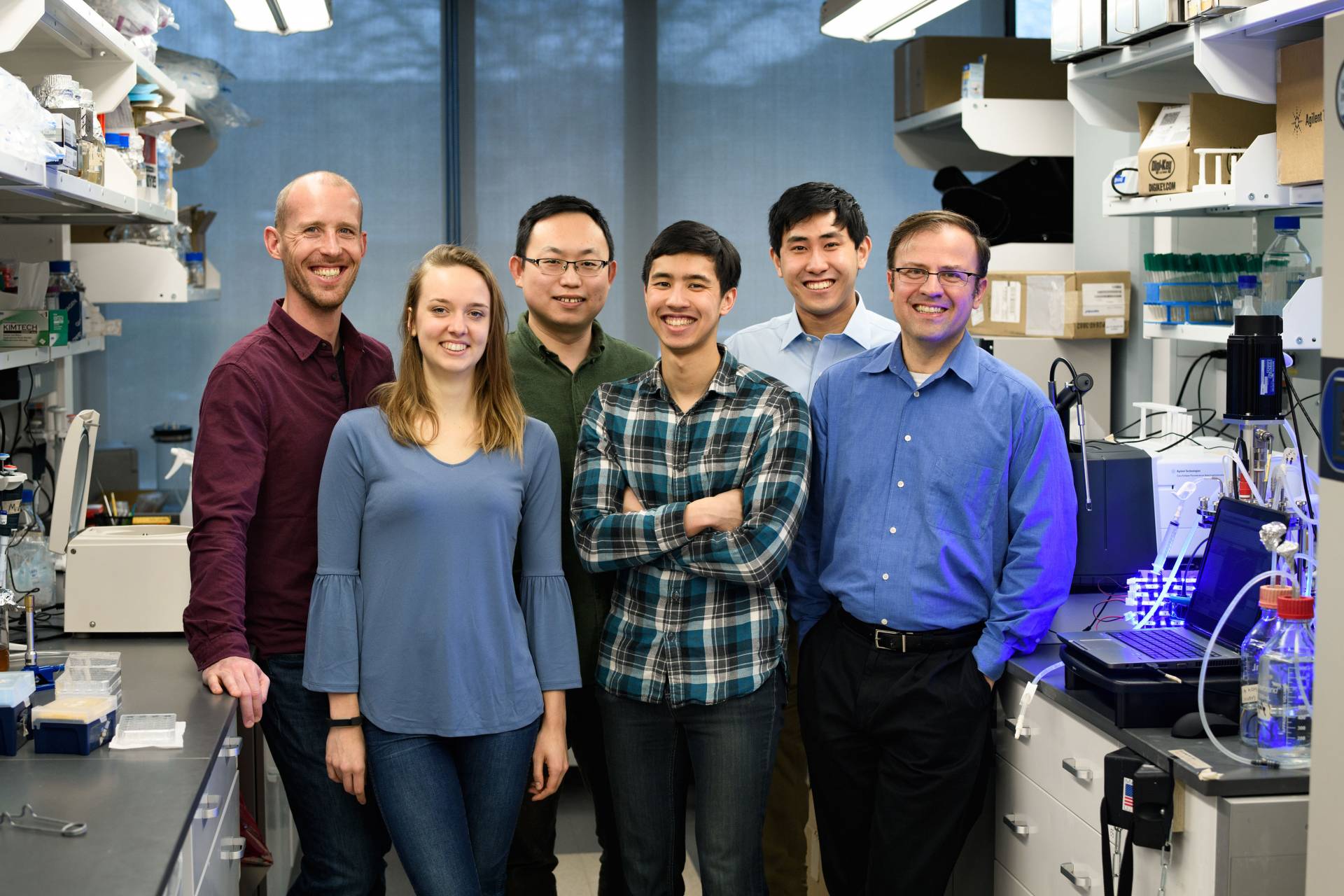 “Normally light turns expression on,” said Jared Toettcher, an assistant professor of molecular biology and co-lead researcher, “but we also had to figure out how to make the absence of light turn another expression on.”

The challenge was to find the right balance of light and dark, given that yeast cells die when their natural fermentation process is disturbed, Zhao said: “The yeast get sick. They don’t do anything anymore; they just stop.”

The researchers allowed the cells to grow by giving them bursts of blue light every few hours. In between they turned the light off to shift their metabolism from powering growth to producing isobutanol. Before the cells completely arrested, the researchers dispersed more bursts of light.

“Just enough light to keep the cells alive,” said Toettcher, “but still crank out a whole lot of product that you want, which they produce only in the dark.”

Using light to control yeast’s chemical production offers several advantages over techniques involving pure genetic engineering or chemical additives. For one, light is much faster and cheaper than most alternatives. It’s also adjustable, meaning that turning it on and off can toggle the function of live cells on the spot at any point in the fermentation process (as opposed to chemicals, which generally can't be turned off once they are added.) Also, unlike chemical manipulators that diffuse throughout a cell, light can be applied to specific genes without affecting other parts of the cell.

Optogenetics, as the use of light to control genes is called, is already used in neuroscience and other fields, but this the first application of the technology to control cellular metabolism for chemical production. Gregory Stephanopoulos, an MIT chemical engineering professor who was not involved with Princeton’s research, called it a turning point in the field of metabolic engineering.

“It offers a brand new approach to the control of gene expression in microbial cultivation,” Stephanopoulos said.

The work and resulting paper were the culmination of interdisciplinary collaboration between Avalos’ and Toettcher's labs.

Both started working at Princeton in the winter of 2015 and immediately saw an opportunity to work together. Zhao worked in both labs.

“Within our first month we wanted to use light to control metabolic engineering,” Toettcher said.

Avalos said the researchers are working to improve their results. They have recently tested different colors of light to activate various proteins and cut the time needed for yeast to produce desired chemicals. But he said they would ultimately like to expand the scope of their work.

“We intend to keep pushing,” Avalos said. “But metabolic engineering transcends industrial microbiology. It also allows us to study the metabolism of cells for health-related problems. You can control metabolism in any context, for industrial biology or to address medical questions.”

Other authors on the paper were Department of Chemical and Biological Engineering graduate students Yanfei Zhang, Justin Mehl, Helen Park and Makoto Lalwani. Support for the project was provided in part by the Alfred P. Sloan Foundation, the National Institute of Health, the Pew Charitable Trusts, the Eric and Wendy Schmidt Transformative Technology Fund, and the Princeton E-ffiliates Partnership.