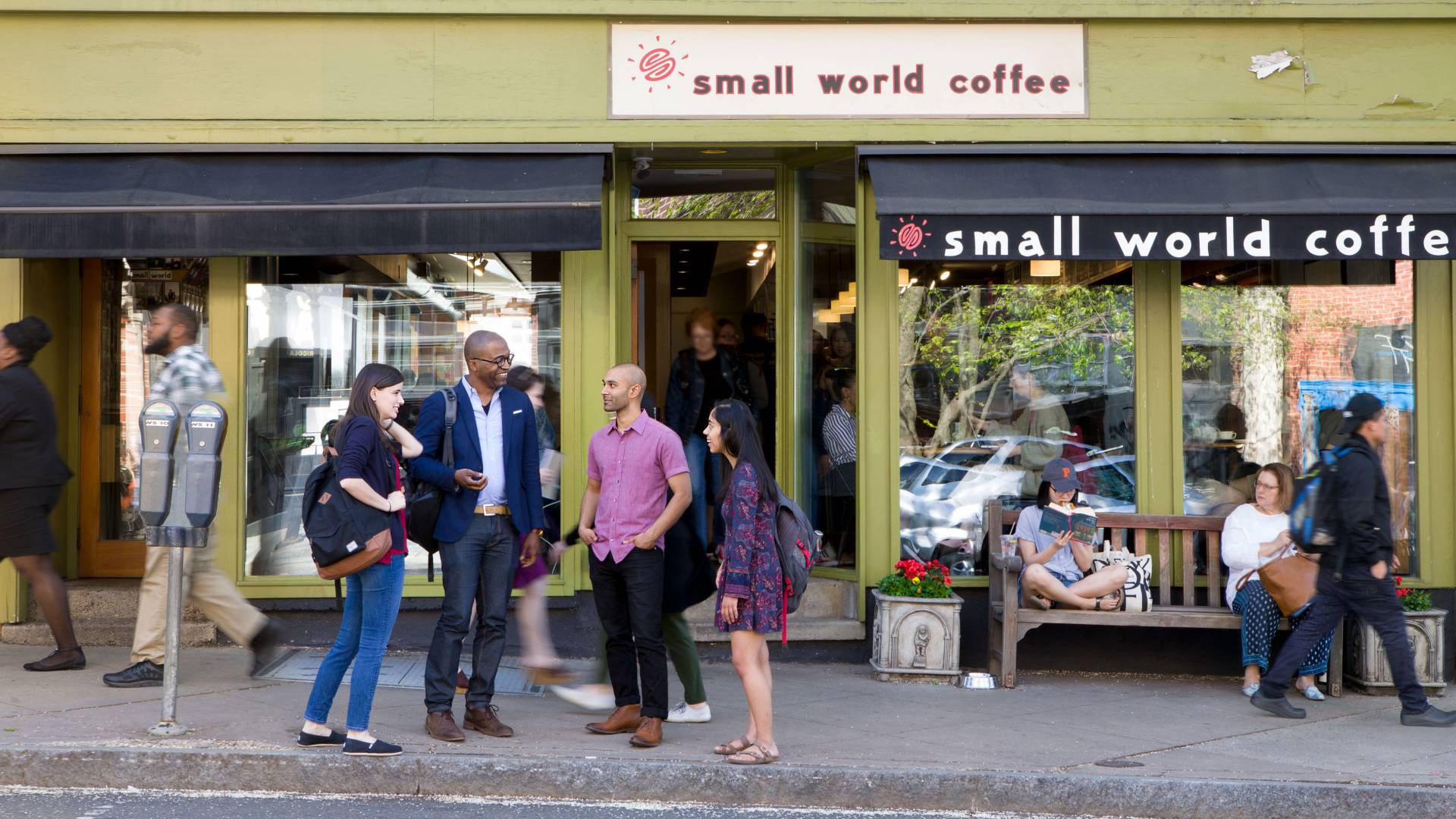 Princeton sociologist Frederick Wherry, second from left, studies how people interact with money and the institutions that surround it. He is shown here in the town of Princeton with members of his research team involved in the Dignity and Debt Network, from left: Isabel Jijón, postdoctoral research associate; Parijat Chakrabarti, graduate student; and undergraduate Gabriela Oseguera Serra.

Frederick Wherry, a professor of sociology at Princeton, calls himself an "accidental sociologist."

Growing up in South Carolina with his twin sister and four brothers, he wanted to be a civil rights lawyer. During his undergraduate years, he traveled to Africa, and after graduation, Asia, leading him to aim for a career in international development.

His interest in sociology began when he, in his words, "accidentally" took a course in the subject at Princeton while earning his master's degree in public affairs. A friend and fellow student, José Quiñonez, who would later become a colleague, asked him to come along to a small graduate reading course that needed an extra student. The topic — immigration and ethnicity — intrigued him.

"After the first session, I said to myself, why am I not a sociologist? I didn't know that sociology could be that exciting," Wherry said.

Appointed last fall to the Princeton faculty, Wherry combines his early commitment to social justice with research on how people interact with money and the institutions that surround it. He asks questions about the kinds of financial rules and social commitments that affect how people think about and make financial choices.

This spring, Wherry is leading a new initiative called the Dignity and Debt Network in collaboration with the Social Science Research Council. A two-day symposium will take place at Princeton on May 9-10, bringing together leading researchers from around the world to examine issues such as the subjective experience of debt and how to develop studies and methods for improving how people experience debt. 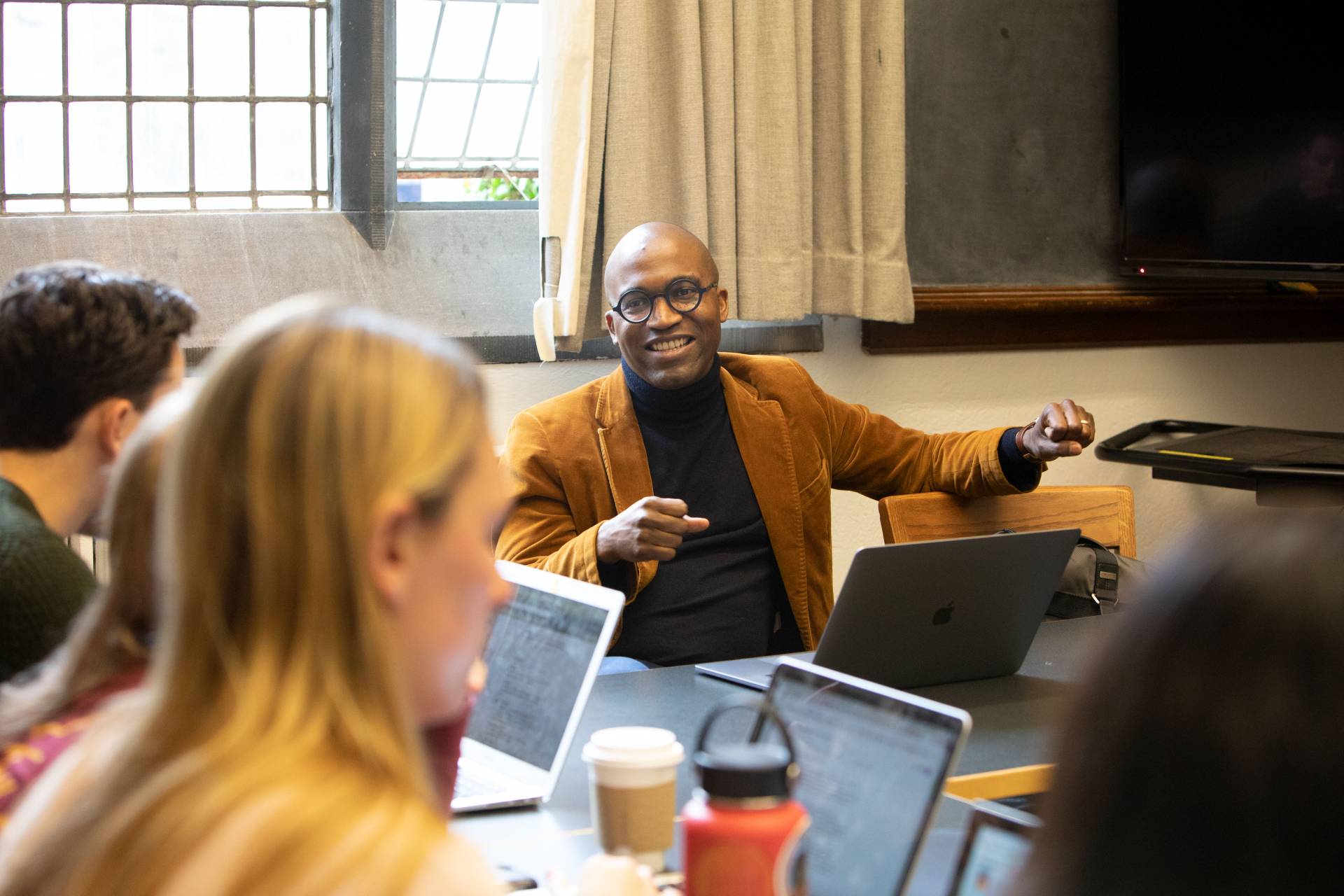 A commitment to justice

When Wherry arrived on campus last fall, he was in some sense coming home. He first came to Princeton in the summer of 1994 while a junior at the University of North Carolina-Chapel Hill (UNC), to participate in the Woodrow Wilson School Junior Summer Institute. Part of the Public Policy and International Affairs Fellowship Program, the institute offers talented students from diverse backgrounds an opportunity to prepare for graduate-level study and careers in public policy.

Instead of returning to his senior year at UNC, though, he took the year off to work as a social worker in Johannesburg during Nelson Mandela's presidency, running programs for teenagers who were first-time offenders and taking statements from prisoners awaiting trial to try to get them legal representation. He also volunteered with the AIDS Law Project of South Africa.

After graduating from UNC and spending a year in Thailand as a Luce Scholar working on HIV/AIDS prevention and care programs, Wherry entered the Master in Public Affairs program at the Woodrow Wilson School of Public and International Affairs. Halfway through the two-year program, he took a summer internship at the World Bank that led to a full-time position investigating corruption in World Bank-financed projects as well as the social impact of the 1997 financial crisis in Asia.

He returned to Princeton to finish his master's degree in 2000, and then moved on to his doctorate in sociology, which he completed in 2004. After a postdoctoral research position at the University of Pennsylvania, Wherry held a faculty position at the University of Michigan, where he was awarded tenure, and then at Columbia and Yale universities before coming to Princeton.

Wherry's parents instilled in him a sense of academic rigor. At the end of the eighth grade, he earned a scholarship to attend Asheville School, a boarding school nearly three hours from his home.

The opportunity proved transformational. When it was time to consider college, Wherry chose UNC, where the offer of a prestigious Morehead (now Morehead-Cain) Scholarship assured economic security. Prior to starting university, he spent a year in the United Kingdom studying A-levels, the academic equivalent of Advanced Placement classes in the United States.

As he moved from one opportunity to the next, Wherry noticed how different types of schools and institutions led to divergent outcomes for people he knew. From an early age, he practiced social observation and tried to identify patterns in the paths people took, especially for those doing things he wanted to do, and for those whose bright futures were prematurely snuffed out.

"In some ways I was doing sociology on myself for a long time, before I became a sociologist," Wherry said. "I became very self-aware of how my future prospects depended not only on ability, but also on opportunity." 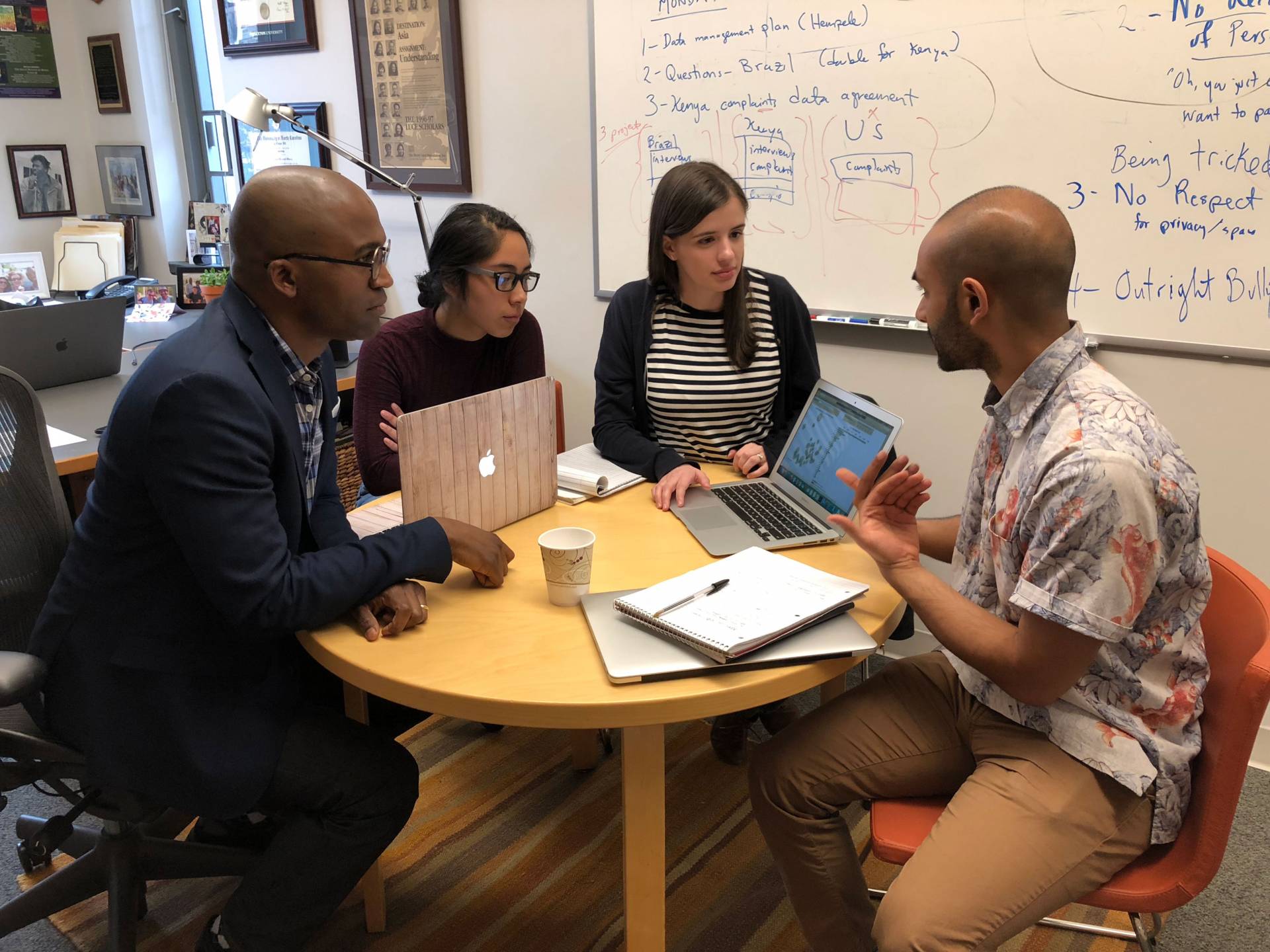 One area of Wherry’s research focuses on the sociology of debt, including how a person’s dignity is affected in situations of debt. This spring, he is leading a new initiative called the Dignity and Debt Network, which is holding a symposium at Princeton on May 9-10. Wherry, from left, is shown here in discussion with members of the research team, Oseguera Serra, Jijón and Chakrabarti.

Wherry's interest in the sociology of debt started when Quiñonez, whom Wherry had met when the two were students in the Junior Summer Institute, invited him to study a lending project that Quiñonez had founded in California. Quiñonez, who earned his Master in Public Affairs from Princeton in 1998, started the nonprofit Mission Asset Fund (MAF) to help low-income individuals build credit and save money through "lending circles," small person-to-person savings groups.

Wherry started developing questions about clients' experiences with financial services such as lending circles and asking about the reasons people might take out loans. He observed that some of the clients felt pressure to say they could handle their own affairs, even when struggling financially. He was interested in the ways people talked about and interacted with money, the ways they took on debt and the ways they sometimes refused to ask for assistance, while battling to maintain dignity.

"[People] live in the language of, 'my kids are OK,' 'my parents are OK,' and 'I'm not being harassed,'" he said. "They are wrapped up in what it means to be good and how to live with decency."

As a result of these investigations, Wherry is co-writing a book called “Financial Citizenship” with Kristin Seefeldt of the University of Michigan and Anthony Alvarez of California State University-Fullerton. The book identifies how consumers seek to be free from financial exploitation while taking care of loved ones and living their lives with dignity. The second goal sometimes gets in the way of the first, Wherry said.

He is also looking at these issues from a global perspective. For example, in a collaboration with an organization in Nairobi called Financial Sector Deepening-Kenya, Wherry is working with researchers who found that there was a lack of transparency in how information was given to bank customers. When mystery shoppers were sent to banks, they noticed the customers were given inconsistent information or received varying prices when going to different branches.

Recently, Wherry co-edited the book "Money Talks: Explaining How Money Really Works" (Princeton University Press, 2017) with Nina Bandelj, a professor of sociology at the University of California-Irvine who earned her doctorate in sociology at Princeton in 2003, and Viviana Zelizer, Princeton's Lloyd Cotsen '50 Professor of Sociology. The book brings perspectives from international experts reflecting on how we make money, how we personalize it, how we keep track of it, and how social relations, emotions, moral concerns and institutions shape our relationships with money.

The Dignity and Debt Network

A person’s dignity has been recognized as important in the public health realm — in relation to medical treatments, hospice care and doctor-patient interactions — but it has not yet been examined in the context of financial services and economic transactions.

"What would happen if we put the question of dignity at the forefront of the design and distribution of different financial services?" asked Wherry. "What are the human values that are implicated in debt? Is there a way to think about debt with dignity?"

This week’s inaugural Dignity and Debt Network symposium will home in on some of these questions. The initiative has received early support from the Mastercard Center for Inclusive Growth, an independent subsidiary of Mastercard that engages in research and philanthropy programs to promote economic growth and financial inclusion. Princeton's Office of the Provost, the Department of Sociology, and the Princeton Institute for International and Regional Studies (PIIRS) also provided support.

At the meeting, economists, sociologists, anthropologists, psychologists, historians and data scientists will address questions about the meaning of dignity in debt, what is fair, and people's experiences of disrespect and respect when using mainstream financial services. They also will discuss how to redesign the experience and arrangements of debt.

One of the questions Wherry is asking focuses on the collection of debt in ways that are respectful. Infusing respect into the debt-collection process could potentially help increase compliance. If we are able to help people avoid shameful interactions in banks, there could be hope in restructuring the design of these financial services, he said.

Wherry reached out to Chakrabarti in the fall after reading one of his papers about using automated text analysis as a way to complement qualitative research methods. Now, they are collaborating on analyzing complaints data for the Dignity and Debt project.

"As a mentor he gives really good feedback," Chakrabarti said. "It's great to be working with him."

This spring, Wherry is teaching the undergraduate course "Money, Work and Social Life" and the graduate course "Consumption, Marketing and Inequality." He also is the departmental representative for the sociology department and is advising four senior theses.

In precept, he encourages his students to take a critical stance, to think about the types of questions they can ask, and to consider what they might have done differently in a study.

He wants to teach his students to be able to read things that they do not understand. "There's a value to learning how to sit with discomfort," he said. He added that one must learn to embrace the "unsettling of the settled," when things we have taken for granted are challenged or overturned.

In Wherry's graduate seminar, students are getting a first look at unpublished work as well as entries to the "Oxford Handbook of Consumption," which Wherry is co-editing with Ian Woodward at the University of Southern Denmark.

"As a mentor, he's fantastic because he has this unique way of approaching a problem," said Isabel Jijón, a postdoctoral research associate. "Sometimes when you're doing research you get caught up in your own perspective, but he is able to step back and look at the bigger picture."

Jijón's research focuses on child labor, and how working children talk about and experience their work in a way that preserves their dignity. She noted that Wherry is always thinking about how research will help people and make the world a little better.

"I think for me one of the reasons I like working with him is his enthusiasm for research," she said. "He has a way of getting you excited about your research and the questions you're asking."