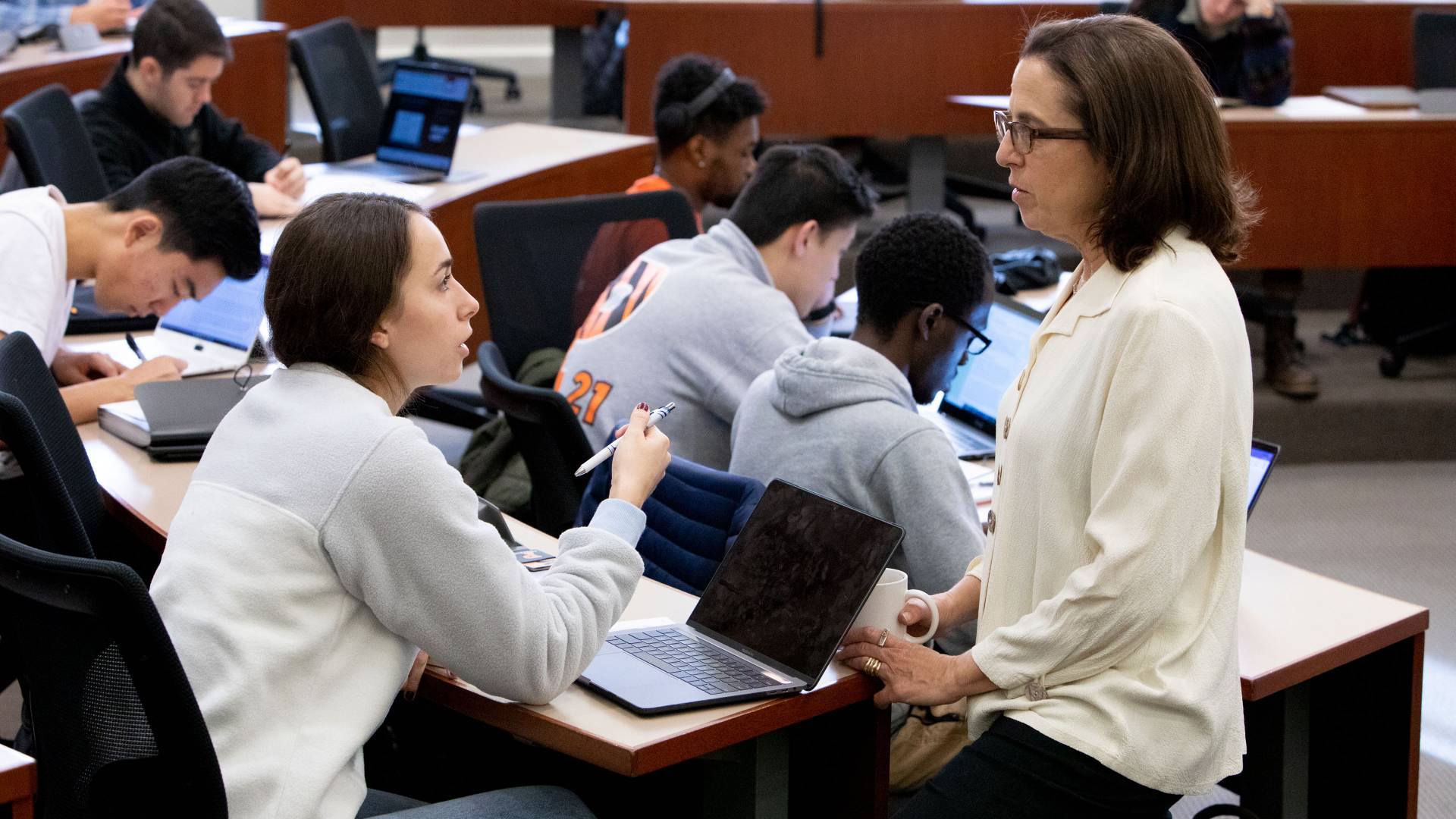 Julia Elyachar, right, is teaching an undergraduate course this fall titled “Debt.” The class offers a deep dive into the ways we can evaluate debts and obligations — monetary and otherwise. Here, she converses with first-year student Sophia Lewandrowski.

Debt can be a fraught word, but in truth, it has many meanings. Taking a multifaceted approach to the study of debt has allowed one Princeton class to explore its impact throughout history and to better understand its role in our lives today.

Elyachar became interested in debt as an economics major at Barnard College. She earned her Ph.D. in anthropology and Middle Eastern studies at Harvard University. Her primary research site is Egypt, and she also has conducted ethnographic work in Israel/Palestine and the former Yugoslavia. She is the author of the prize-winning book “Markets of Dispossession: NGOs, Economic Development and the State in Cairo,” which will be published in Arabic next year. Her forthcoming books are “Debts of Empire: Populism, Social Infrastructure, and Revolt in Egypt”; and “Factories: A Genealogy of Western Economic Order from the Levant,” which is in progress.

Elyachar joined Princeton’s faculty in 2016 from the University of California-Irvine. She has taught and held research positions at New York University at the International Center for Advanced Studies and the Hagop Kevorkian Center for Near Eastern Studies, and at the Academy of Sciences and Arts in Ljubljana, Slovenia. Her first job was as a researcher in the Banking Studies Division at the Federal Reserve Bank of New York, where she provided analysis of the Latin American Debt Crisis of 1982 and helped shape the U.S. regulatory response. 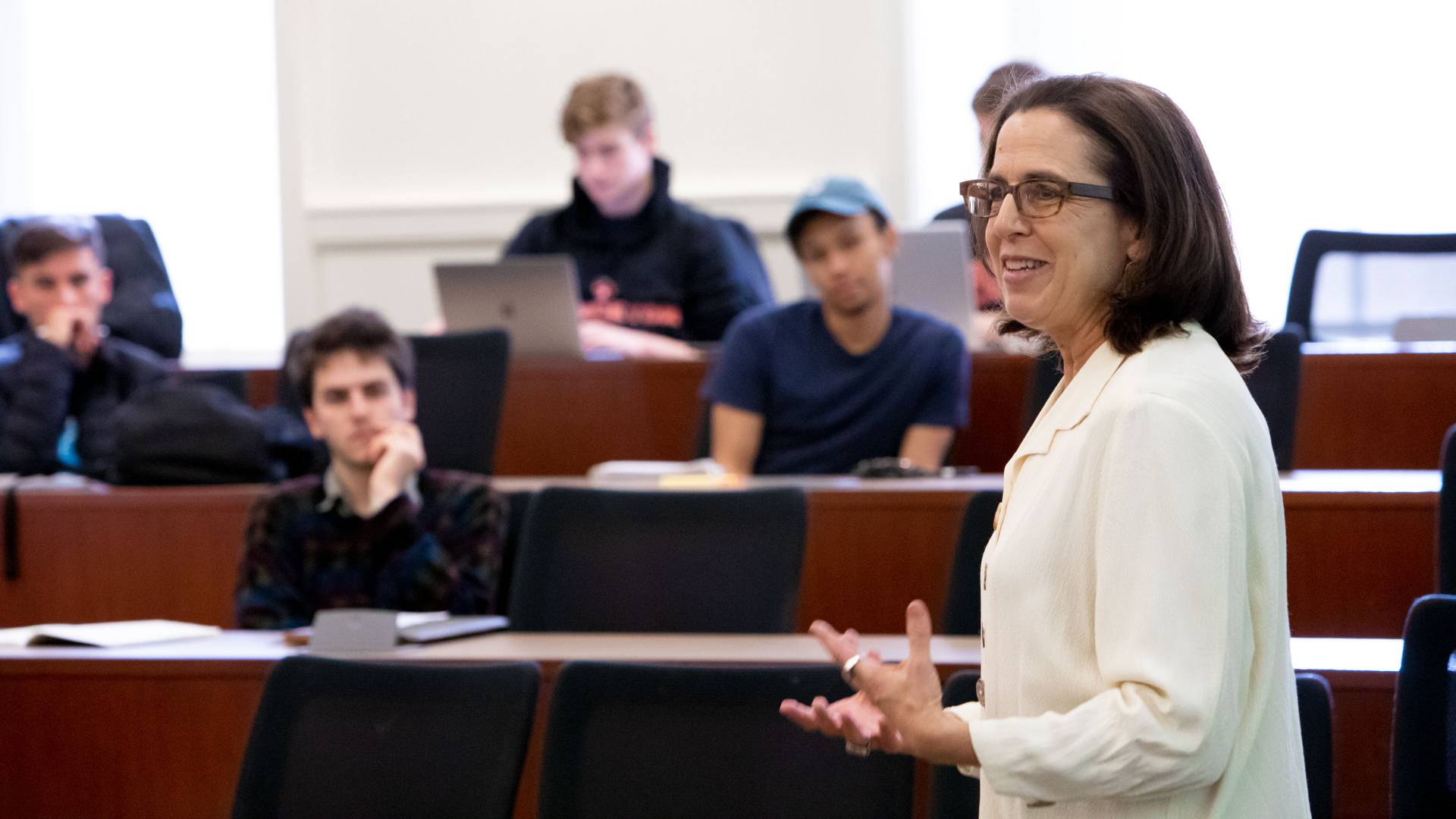 Elyachar, an associate professor of anthropology and the Princeton Institute for International and Regional Studies, says in addition to offering historical, economic and anthropological contexts for debt, she aims to provide students with financial literacy.

Description: The course summary notes that Americans average $16,000 in credit card debt and owe, on average, $30,000 in college loans. How and why people go into debt is more relevant than ever.

Forty-eight undergraduates, ranging from first-year students to seniors and encompassing numerous majors, are taking the class. They come from a variety of countries, regions and socioeconomic backgrounds and are enrolled at a university with a generous financial aid program — the average total indebtedness for Princeton graduating seniors who do borrow is just $9,000.

The question of debt, though, engages all.

The class brings broad insight to debt and indebtedness by exploring the topic from an interdisciplinary perspective. Elyachar said as a joint faculty member with PIIRS, she helps students see the links between social sciences and humanities, and how theory-making is linked to dilemmas of particular regions and times.

In early Greece, for instance, debt could lead to enslavement. In 16th-century France, to have no debts was to be seen as less than human. Public debt was an enormous topic of concern to the English in the 18th century, and the sovereign debt crises in Latin America in the 1980s changed banking along with politics.

Gift-giving and expectations around reciprocation are especially lively topics in class, Elyachar said. “That’s where diversity in a classroom is wonderful,” she said.

Multimedia plays a role in the discussions, from videos to YouTube clips to cartoons. Students read fiction, nonfiction and journalism, as they examine the public and private impacts of debt.

Students also share with each other in small groups to benefit from their differing personal experiences with the subject. 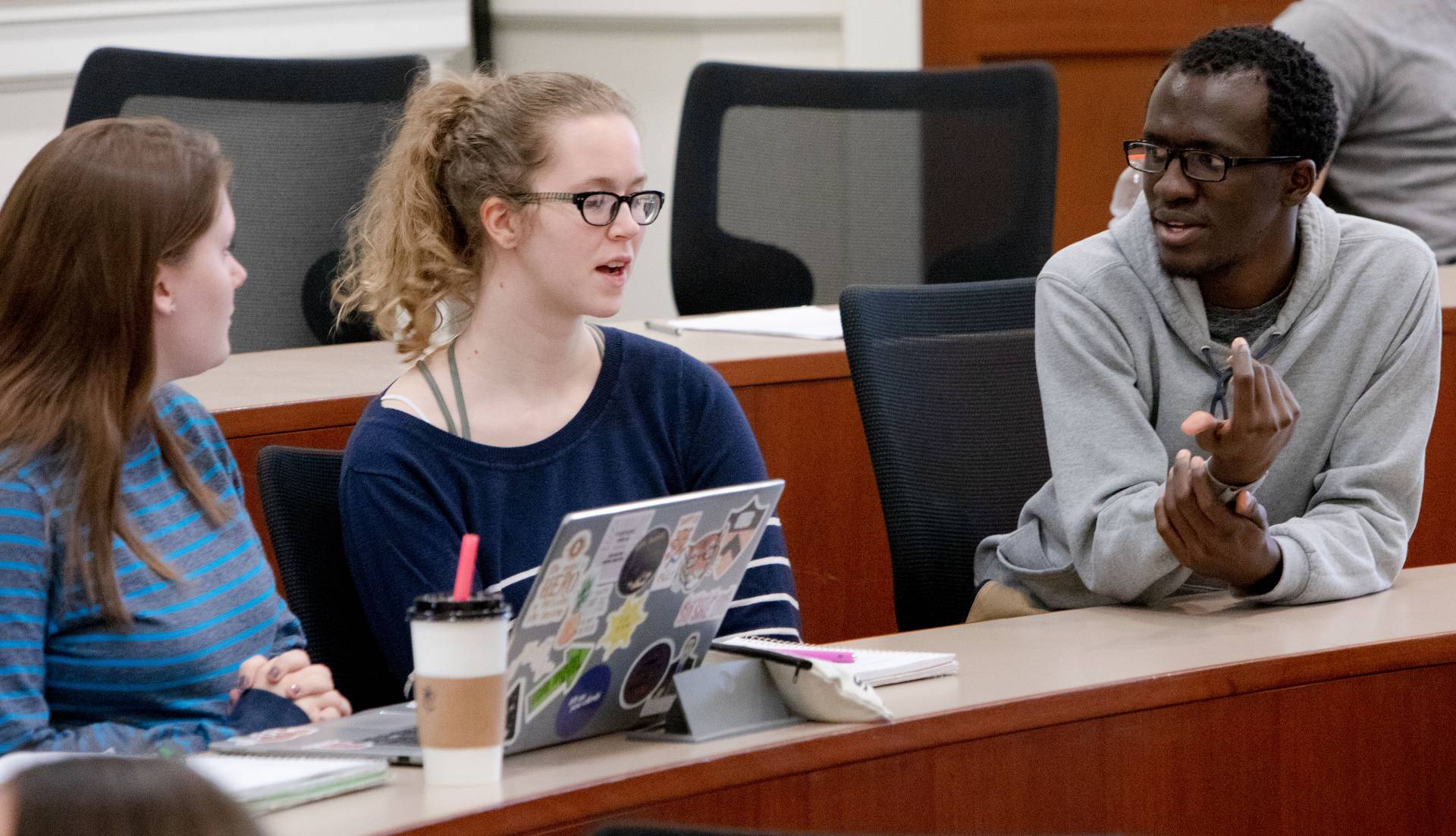 Group work is a key component of the class, allowing students to gain insight from each other. Pictured left to right are sophomores Ava Goldinger, Amanda Koym and Peter Mwesigwa.

Using history to avoid repetition: The 2008 financial crisis and the many ways it plays out to this day is a major reference point for the class. “Many students today don’t know anything about the 2008 financial crisis,” Elyachar said. “I see that as a civic duty to make sure that citizens, and Princeton students among them, understand the key elements of the build-up to the crisis, how it relates to previous debt crises, and to give them tools to parse out what is an economic and what is a moral or political issue.”

Among the authors students read are many calling for financial literacy among students, including Princeton’s Alan Blinder, the Gordon S. Rentschler Memorial Professor of Economics and Public Affairs, and Frederick Wherry, professor of sociology, who leads the Dignity and Debt initiative. “I hope students learn something about the cultural assumptions baked into some of their thinking about debt, ranging from different approaches in their own families and cultures about whether or not to fight for a check or easily agree to split a check at a dinner out, to where the blame gets laid when things go wrong,” Elyachar said.

An open forum: Finances can be a sensitive subject, but in Elyachar’s class students see how debt and personal finance have become a topic of public and political debate, from the NPR podcasts “Death, Sex and Money” to calls to “Drop the Debt.” Students have recounted their own “debt stories” for an online discussion board; the submissions revealed the complexity of decision-making for this generation, even for students at Princeton, Elyachar said.

Rethinking obligations: One unit in the course focuses on student debt. To open the class discussion, Elyachar played a news clip of Lindsey Stanberry, author of “Refinery29 Money Diaries: Everything You’ve Ever Wanted to Know About Your Finances ... and Everyone Else's.” In the segment, Stanberry argues against the stigma surrounding student debt, explaining that it makes more sense to view student loans as mortgages.

Elyachar stopped the recording. “Why is it not shameful to have a mortgage?” she asked the class. One student answered he thought it was because nearly everyone needs to borrow money to afford a house. Another said, “It doesn’t carry that stigma of irresponsibility.”

Elyachar went on to discuss the reasons college tuition has increased and how the burden has shifted onto students and their families in recent years. She then introduced ideas that have been proposed to eliminate or reform onerous lending practices to students.

Later in the lecture, Elyachar showed a slide listing hidden costs of today’s high-stakes college admissions, from reduced family time (due to student activities in high school) to increased suicide rates to the high numbers of sports injuries suffered by athletes competing for scholarships.

From the back of the room, a student audibly whispered, “That’s crazy.”

“The spillover in many areas of life is quite dramatic,” Elyachar said.

Students say: “I haven’t taken many classes here, but it seems unique in the sense that there are a lot of different majors and cultural backgrounds represented,” said Micah Newberger, a first-year student. “Professor Elyachar, during lecture, tries to tease out these differences both by asking us to participate and by including a wide range of opinions in the readings for any given week. This has at times been difficult — trying to learn all of the different perspectives on, say, student debt — but I think it has helped me understand the issue and formulate better questions about it.”

“The most useful part of the class to me has been how Professor Elyachar helps us delve into major debt-related events of the past and then shows their ripple effects on society today, both domestically and on sovereign nations due to the globalized state of today’s affairs,” said Insu Jung, a senior. “A lot of us econ majors learn about the events, factors and policies leading up to the 2008 financial crisis as well as the policies enacted in response to it, but longer-lasting effects are usually skipped.”

“As someone with a lot of diverse interests, it’s really cool to be able to look at debt from so many perspectives,” said Ava Goldinger, a sophomore in mechanical and aerospace engineering. “That's part of the reason why, though I'm an engineering major, I picked a liberal arts university. I wanted the chance to learn about all of the things that interest me, and this class is a great example of that.”

Gabi Forrest, a senior majoring in economics, said she gained a lot of financial literacy in the class. “I think it gives a nice real-world perspective.”

Graduates of first 'no loan' class look to future