Kimberly Betz, director of the Career Center at Carleton College since 2013, has been named executive director of Career Services at Princeton University. 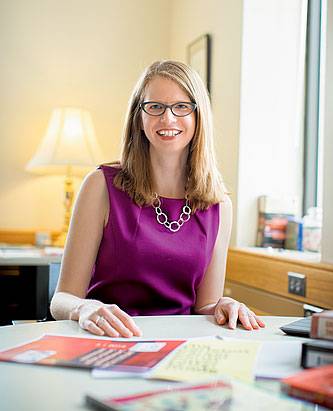 Betz will begin her new duties effective Aug. 1, leading a staff that recently completed a strategic relaunch of its services and significantly increased the breadth and depth of how it engages with students and alumni.

The appointment was announced Tuesday, May 15, by W. Rochelle Calhoun, the University's vice president for campus life, to whom Betz will report.

“I’m delighted that Kimberly Betz will be joining us at Princeton,” Calhoun said. “Along with her impressive professional accomplishments, Kimberly brings a passion for working with students to achieve their post-university goals. I’m looking forward to working with her.”

In five years in the director role at Carleton, Betz led the college's strategic initiative to prepare students more robustly for their post-graduation careers and supported the "Life After Carleton" component of a capital fundraising campaign. She also developed new programs and tools to integrate holistic career development across all campus advising efforts.

“Princetonians benefit from a world-class education centered on liberal arts values,” Betz said. “This equips them with the building blocks they will need to lead lives of service to humanity. I couldn’t be more honored and excited to be part of a dedicated and talented team working to provide these undergraduate and graduate students with the skills, networks and opportunities that will enable them to embark on career paths of meaning and purpose.”

Betz will oversee a staff of more than 20 people and work in partnership with academic and administrative leaders across campus. She will serve as the public representative of Career Services with external partners including alumni, trustees, employers, foundation leaders and others across the country and around the world.

“Kimberly’s deep experience, dynamic leadership and collaborative spirit will enhance Princeton’s talented Career Services team,” said Elizabeth Colagiuri, deputy dean of the college, who was a member of the search committee. “She will be a tremendous partner as we seek to create meaningful career opportunities for all Princeton students.”

Betz began her career at Carleton, her alma mater, as a program coordinator in the Career Center in 1996. She rose to assistant director and associate director of the center, then became director of internships at Oberlin College in 2000. She served as director of career development at St. Catherine University from 2005 until returning to Carleton.

Colagiuri selected as deputy dean of the college at Princeton

Satinsky will lead health promotion and prevention programs at Princeton