Janet Lavin Rapelye, who has been dean of admission at Princeton since 2003 as the University has transformed the diversity of its undergraduate student body, has been named president of the Consortium on Financing Higher Education (COFHE). She will join the organization Nov. 1. 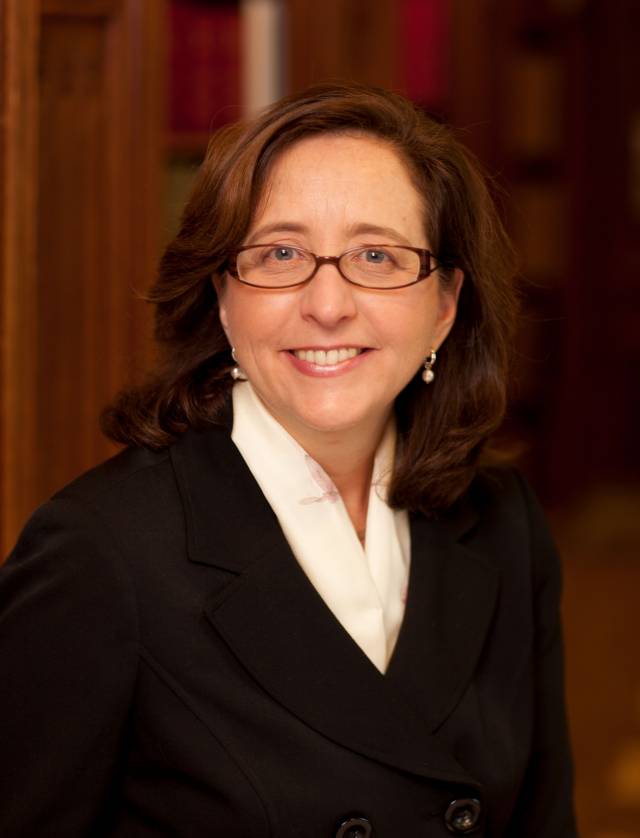 Janet Lavin Rapelye, dean of admission at Princeton since 2003, will become president of the Consortium on Financing Higher Education (COFHE) on Nov. 1.

"Janet Rapelye has served with distinction for 15 years as Princeton’s dean of admission," Princeton President Christopher L. Eisgruber said. "Choosing among the thousands of qualified applicants to Princeton is a nearly impossible task, and she has handled it with skill, sensitivity and integrity.  We wish her well as she assumes her new role."

COFHE is an organization supported by and representing 35 highly selective private liberal arts colleges and universities, including Princeton. COFHE is based in Cambridge, Massachusetts, and has an office in Washington, D.C.

"I am honored to take on this leadership role at COFHE to work with the member colleges and universities, which are committed to meeting the full demonstrated financial need of admitted students," Rapelye said. "It has been a privilege to serve as dean of admission at Princeton for the past 15 years and to admit each class with my admission colleagues. I have appreciated the support of President Eisgruber, the trustees, Dean of the College Jill Dolan and the whole Princeton community. I look forward to seeing the successes of the students in the future, albeit from afar."

Rapelye became dean of admission at Princeton on July 1, 2003. Under her leadership, the Office of Admission implements policies established by the president, faculty and trustees and develops strategies to attract, admit and enroll an outstanding undergraduate student body with diverse backgrounds and interests from all socioeconomic levels. Rapelye serves on the president's cabinet and is responsible for articulating the University's teaching and research mission to prospective students and their families.

During her tenure, applications to Princeton have nearly tripled, to 35,370 in 2018, and the admission process has become fully electronic. Princeton has tripled the number of admitted students who are eligible for federal Pell Grants from 7 percent in the Class of 2007 to an estimated 23 percent for those offered admission this fall to the Class of 2022.

"I'm thrilled that Janet Rapelye has agreed to serve as COFHE's new president," said Steven Poskanzer, chair of the COFHE board of directors and president of Carleton College. "Because Janet has devoted her professional career to serving COFHE schools, she has an especially deep and nuanced understanding of the character, culture — and challenges — our member institutions face.

"We will benefit greatly from her decades on the front lines of successful efforts to diversify and strengthen student bodies across COFHE," Poskanzer said. "She is also a wise observer of the broader higher education and public policy landscape, so it will be exciting to see how this expertise informs and shapes COFHE's future."

Rapelye will succeed Kristine E. Dillon, who is retiring after heading COFHE since 2002.

Rapelye was dean of admission at Wellesley College from 1991 to 2003 and was associate director of admissions at Bowdoin College from 1986 to 1991. She previously worked in the admissions offices at Stanford University and Williams College. She also taught at a rural public high school in Wells River, Vermont.

She holds a bachelor's degree in English from Williams and a master’s degree in education from Stanford. She is an honorary member of Princeton's Class of 1980.

"Working with Janet has taught me a great deal about the complexities of the college and university admission process across the country," Dolan said. "Her professional acumen, along with her deep knowledge about the high school education process, has helped those of us who work closely with Princeton students to understand where they come from and the skills and talents they bring to campus. Her success admitting more and more racially, ethnically, internationally and socioeconomically diverse students means that the conversations in our classrooms and residential colleges have been enriched and expanded.  We’ll miss her insights and her empathy but look forward to working with her in her new capacity at COFHE."

Dolan, who is also the Annan Professor in English and a professor of theater in the Lewis Center for the Arts, will be acting dean of admission while a national search for Rapelye's successor begins in the fall semester. Dolan will chair the search committee, which will include faculty, staff and students.

Princeton offers admission to 5.5 percent of Class of 2022 applicants