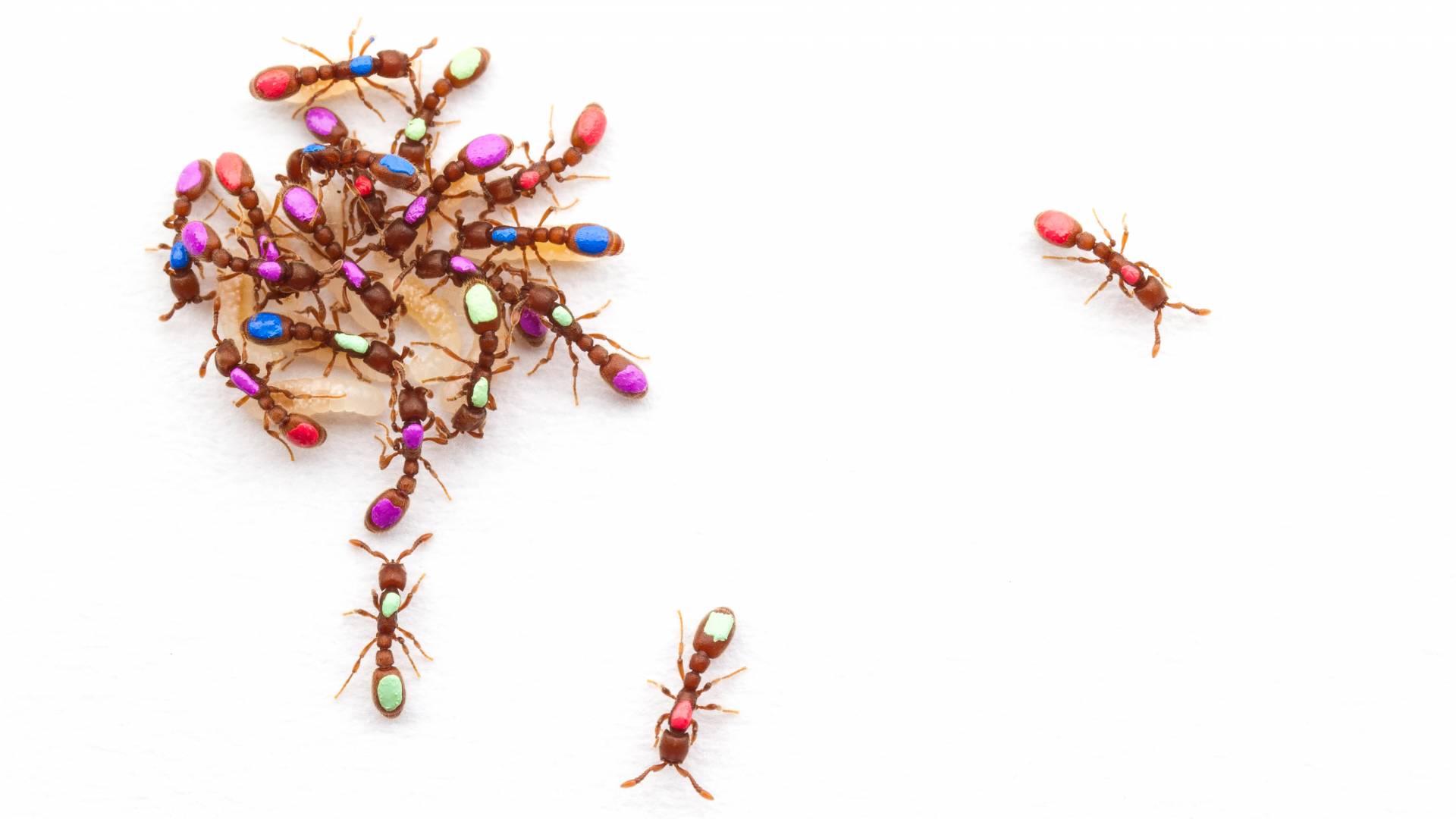 A team of researchers investigated ant colonies to look at the relationship between group size and social behaviors. They found that simply increasing group size, even if it doesn't lead to division of labor, can benefit members of the group. Clonal raider ants, like those seen here, form a dense cluster in which ants care for the offspring while others sporadically leave the cluster to forage. Researchers marked the ants with individual paint tags for automated behavioral tracking.

Ants and humans live in large societies that allow for elaborate structures — nests, cities — filled with resources. Sometime in the distant past, individuals must have organized themselves into the first simple groups, precursors of these complex societies. But how?

A team of researchers from Princeton University and Rockefeller University tackled this question by combining sophisticated mathematical models with detailed empirical observations of the clonal raider ant (Ooceraea biroi).

“Our findings show that there are some very significant and unexpected benefits that emerge even in very small groups, which could provide the critical steppingstone to allow for larger, more complex societies,” said Christopher Tokita, a graduate student in Corina Tarnita’s lab in ecology and evolutionary biology (EEB).

The scientists found that ant groups with as few as six individuals experienced significant benefits from group living, as measured by better-surviving and faster-growing babies. Their results appear in the journal Nature.

“It's easy to see how individuals work together in more complex societies, such as those with queens and workers, because they have distinct roles,” said Rockefeller’s Daniel Kronauer. “But that's not how insect societies started out.”

In fact, this is a general conundrum across biological systems, added Tarnita. “From multicellular organisms to insect groups to human societies, nature has a remarkable ability to construct complex groupings, but we have yet to fully understand what happened at the beginning to facilitate their emergence.”

Moreover, she said, “we are used to thinking of certain features, such as division of labor or cellular differentiation, as characteristic of large, complex groups, but are we right to think that way?”

The scientists used ants to try to understand what the earliest precursors of these complex groups might look like. Small insect groups are more successful than solitary individuals for two main reasons, said Tokita, a co-author on the Nature paper. “First, there are ‘more hands to do work,’ so to speak,” he said. “Important tasks don't slip through the cracks, because chances are there's always an individual to do the task.”

The researchers studied ant groups ranging in size from one to 16 individuals. They chose this species because of its unusually simple social organization: colonies have no queens, just genetically identical workers that reproduce simultaneously. 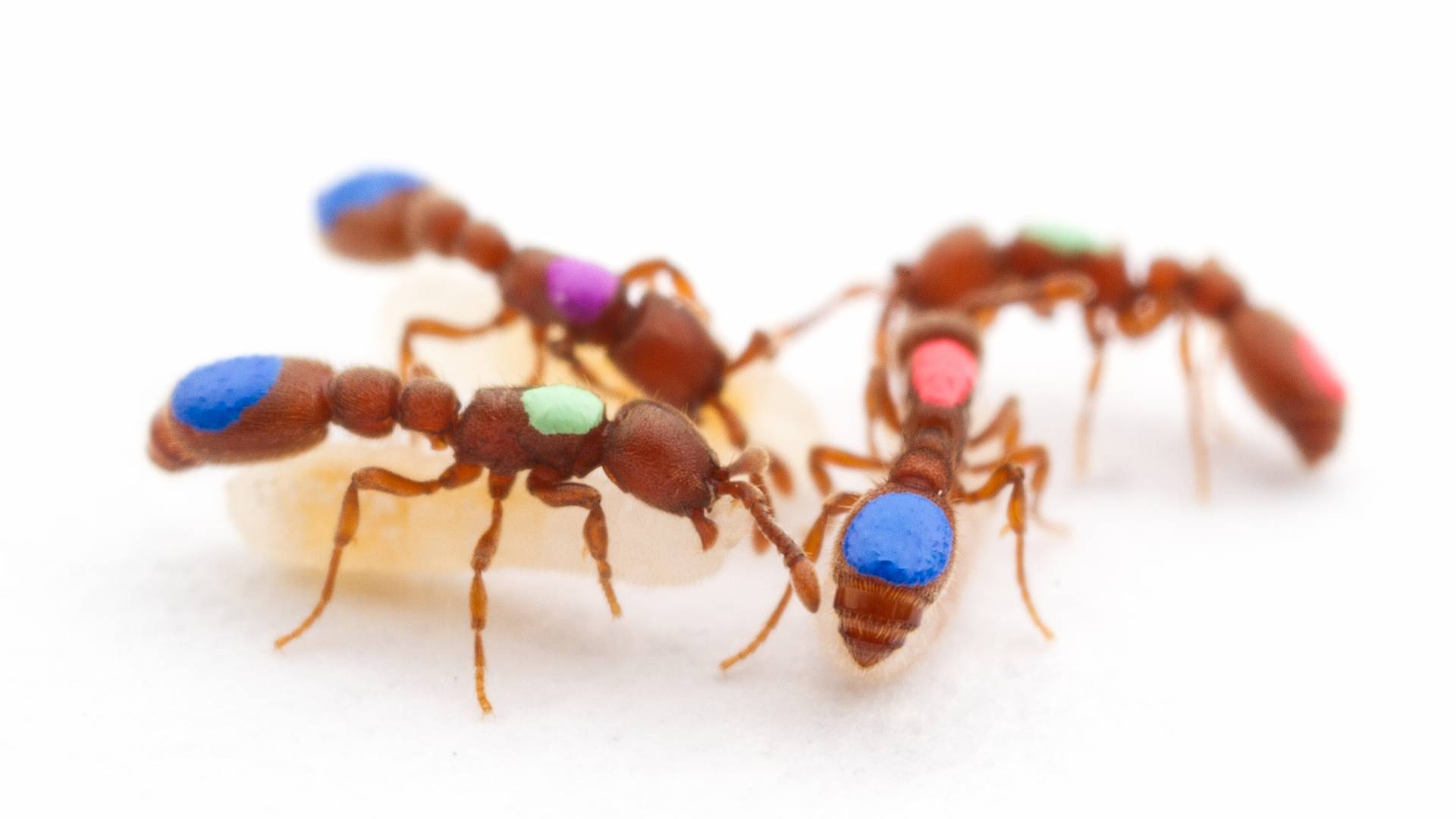 “It was an ideal pairing of experiments and theory,” said Tokita. Researchers in Kronauer’s lab at Rockefeller observed ants in long-running experiments that informed and guided the mathematical models created by the Princeton team.

“With the model, we were able to ask questions that might not be possible to ask otherwise,” said Tokita. “For example, our model predicted that group needs, like hunger, were becoming more stable as groups got larger and division of labor emerged. This was the result of tasks, like foraging and nursing, being more consistently performed and less neglected. While the Kronauer Lab couldn't measure hunger levels in their colonies, they were able to go back to their camera-tracking data and confirm that, as colonies grew larger, those tasks were indeed being more consistently performed. It was amazing! We had a prediction from our model that, when tested against the empirical data, actually held up really well.”

At the outset, the researchers had assumed that the incipient division of labor was the key to success in their larger groups, a common assumption among modern economists as well. They were surprised to find that this was not completely true. Division of labor contributed to but was not necessary to produce the observed increase in fitness with group size, said Tokita. “Instead, we showed theoretically that increases in group size alone, even in the absence of division of labor, could create benefits for these small colonies.”

In addition, their findings challenge a popular belief about group dynamics, that strong groups require strong leaders. “Complicated behaviors, like the division of labor, can self-organize,” Tokita said. “The ant species we used does not have a leader at all. Instead, all group members are workers and they each lay their own eggs.”

This “impressive collaboration between empirical and theoretical research” confirms predictions Tarnita made in 2010 with co-authors Martin Nowak and Edward Wilson, said Nowak, who was not involved in the current research. The earlier paper, also in Nature, argued that complex societies such as those of ants or bees could evolve only “if the benefits of staying together arise already for small group size,” which is exactly what this new collaboration determined, Nowak said.

“Experimentally confirming that ants satisfy this very strong requirement was impossible in 2010,” said Tarnita. It was only what Tarnita described as “a huge effort by the Kronauer Lab to turn ants into a lab model organism” that made this recently possible. “It’s been very exciting to empirically revisit these ideas and, not only find support, but also reveal such unexpectedly rich behavior in such small groups,” she said.

These findings have significant implications for understanding the evolution of social behavior. They show that “a lot can happen very early on and that what we think are hallmarks of complex societies could actually have originated in the simplest groups,” Tarnita said.

Tokita dove into this work shortly after he arrived at Princeton in 2016. “If you had told me a few years ago that in my first year as a graduate student I would get the chance to work on a really cool project that involved ants — which by the way I've been fascinated with since I was a kid — and that the findings of the project would be not only interesting but would also find their way into Nature, I would have told you to stop joking with me.”

“Fitness benefits and emergent division of labour at the onset of group living,” by Yuko Ulrich, Jonathan Saragosti, Christopher Tokita, Corina Tarnita and Daniel Kronauer, published in the Aug. 30 issue of Nature (released online on Aug. 22), was supported by grant 1DP2GM105454-01 from the National Institutes of Health, a Searle Scholar Award, a Klingenstein-Simons Fellowship Award in the Neurosciences, a Pew Biomedical Scholar Award, two fellowships from the Swiss National Science Foundation (PBEZP3-140156 and P300P3-147900), a Rockefeller University Women and Science fellowship, a Kravis Fellowship, and a National Science Foundation Graduate Research Fellowship (DGE1656466).