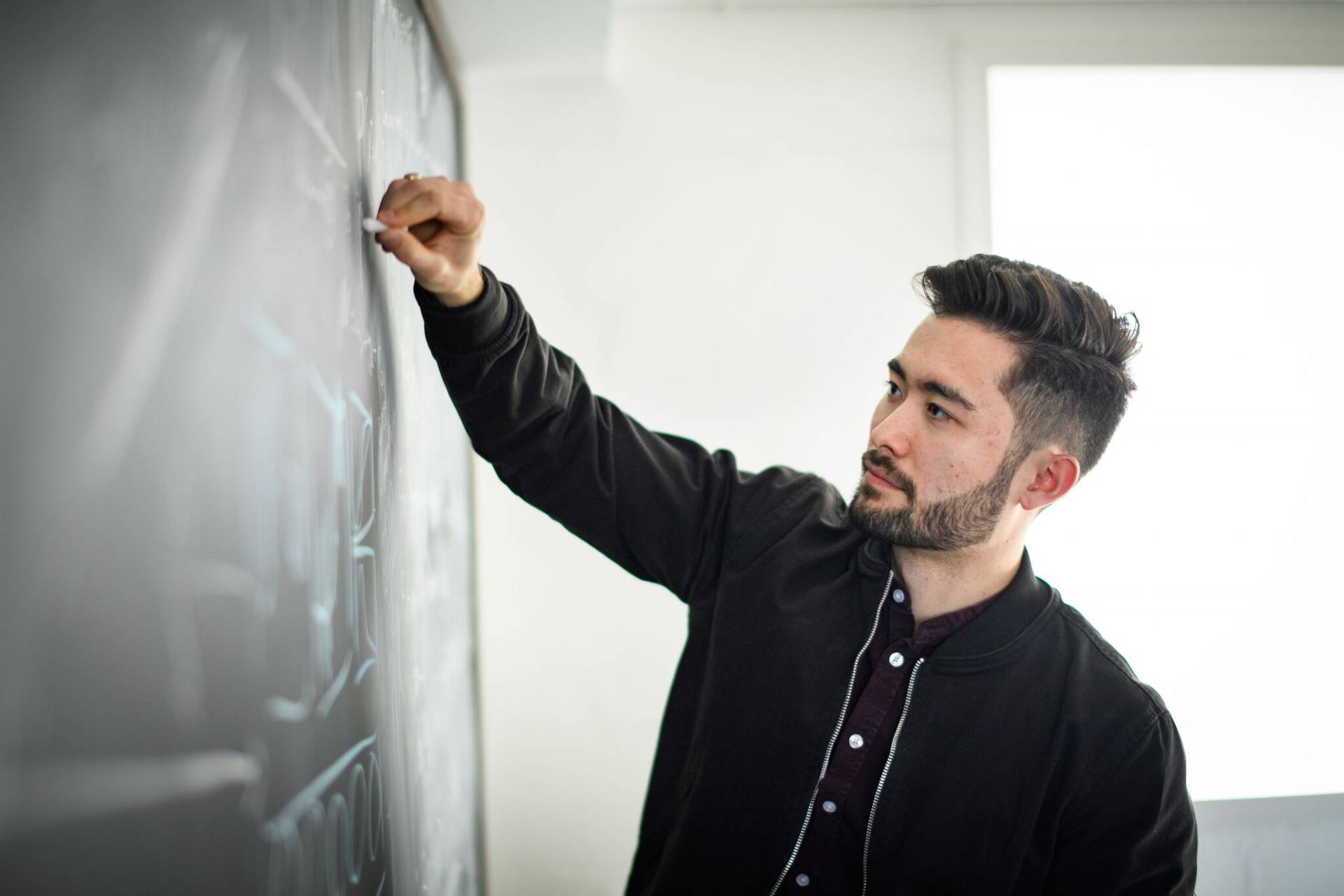 Ant behavior theorists Chris Tokita, an ecology and evolutionary biology graduate student, and his adviser Corina Tarnita found that division of labor and political polarization — two social phenomena not typically considered together — may be driven by the same processes.

Could the division of labor in an anthill be driven by the same social dynamics governing the gap between liberals and conservatives? That was the surprising question tackled by Princeton biologists Chris Tokita and Corina Tarnita.

“Our findings suggest that division of labor and political polarization — two social phenomena not typically considered together — may actually be driven by the same process,” said Tokita, a graduate student in ecology and evolutionary biology. “Division of labor is seen as a benefit to societies, while political polarization usually isn’t, but we found that the same dynamics could theoretically give rise to them both.”

In a paper published today in the Journal of the Royal Society Interface, Tokita and Tarnita examined two forces known to drive political polarization and added them to an existing model for how division of labor arises in ant communities. They found that a feedback between these two forces simultaneously resulted in division of labor and polarized social networks. 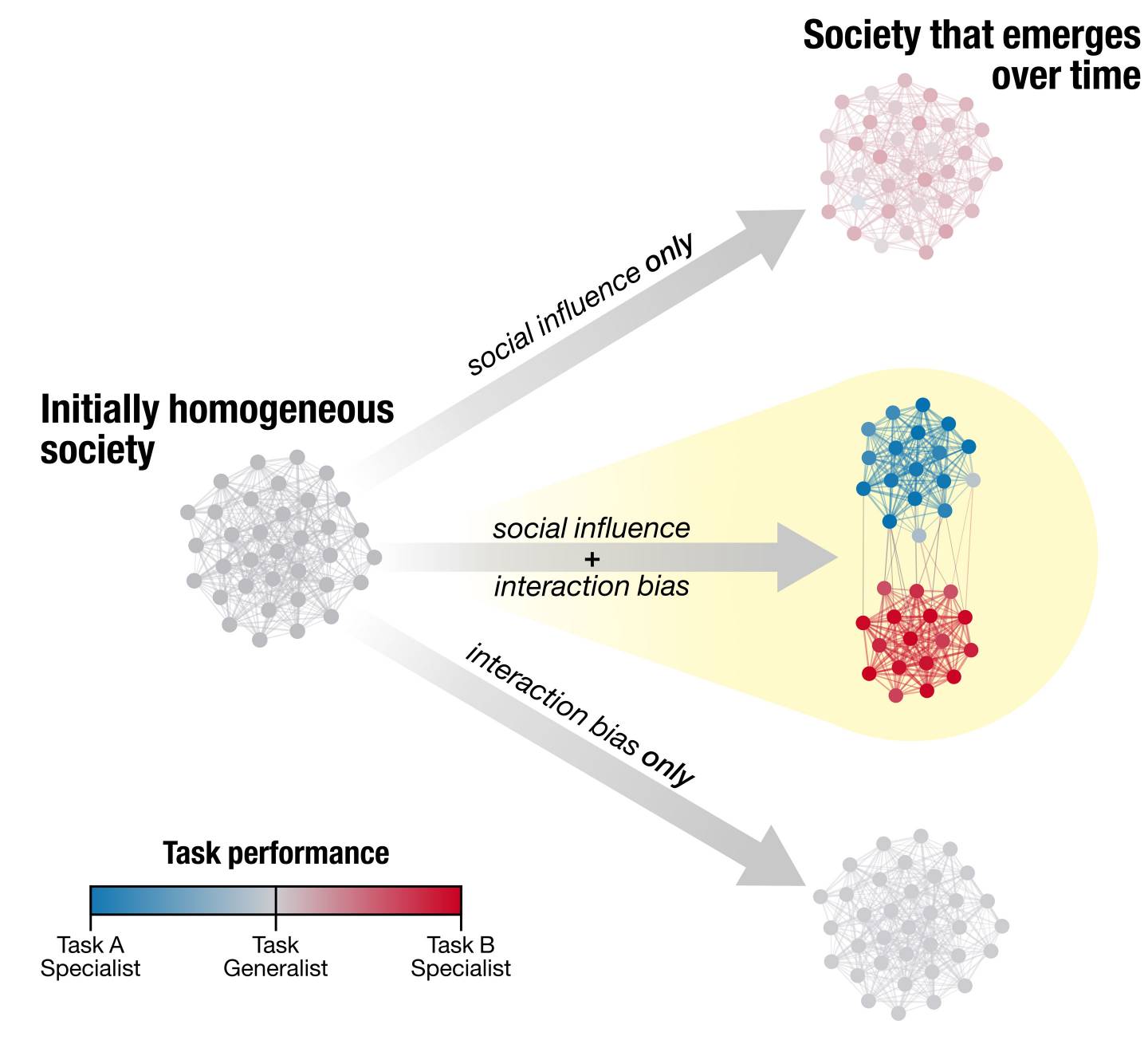 The researchers found that “social influence,” the tendency of individuals to become similar to those they interact with, and “interaction bias,” which leads us to interact with others who are already like us, are both necessary for division of labor and polarized social networks to emerge in initially homogenous groups. When only social influence is present (top), individuals interact randomly and become similar, ultimately causing the group members to tend to perform the same task. When only interaction bias is present (bottom), individuals cannot differentiate, and the society remains homogenous. When both social forces are present, feedback between them results in both division of labor and polarized social networks.

“It suggests that maybe there’s a common process underlying the organization of societies,” Tokita said.

The two forces are “social influence,” the tendency of individuals to become similar to those they interact with, and “interaction bias,” which leads us to interact with others who are already like us. The researchers combined those with a “response threshold” model of ant social dynamics, in which ants choose their activities based on which need meets a critical internal threshold.

In other words, if ants A and B have both checked community food stores recently and checked on their young recently, but A has a lower threshold for hunger while B has a lower threshold for worrying about the health of the larvae, A will head out foraging while B rushes back to the nursery. Over time, this leads A to interact with other hunger-sensitive ants, who become the foraging team, while B spends more time with other care providers, and they become the nurses. Combine that with social influence and interaction bias, and the gulf between the foragers and the nurses grows steadily wider as foragers reinforce the behavior of other foragers and nurses reinforce other nurses.

When this leads to societies eating well and raising healthy young, it’s called division of labor and heralded as a cornerstone of civilization. When it leads to tribalism, it’s called a breakdown of civil discourse.

But the underlying forces might be the same, say the researchers.

“Social insect colonies thrive on the heterogeneity that leads to division of labor, but sometimes they need to make decisions that have to be embraced by the whole nest,” said Tarnita, an associate professor of ecology and evolutionary biology. “For example, when honeybees need to move their nest to a new location, it would be problematic if the colony couldn’t reach consensus and it ended up splitting,”

So what the researchers wondered next was how the social forces that polarized the ants into doing different tasks could be tamed to rebuild consensus when that was needed. Their model predicted a clear way back from polarization: fight the tendency to interact only with those who are similar, and be willing to let your internal thresholds shift a little.

“Our model predicts that if you interact with those who are different from you, over time, you’ll become similar to each other,” Tokita said. “It basically erases those differences.”

It even applies to scientists and sociologists, he added. “One of the things I hope comes from this project is that it causes people in different fields, coming at and thinking about social behavior from different perspectives, to talk to each other a little more. In this project, we learned a lot by borrowing theories from sociology and political science, and combining them with our biological model.”

“Social influence and interaction bias can drive emergent behavioural specialization and modular social networks across systems,” by Christopher K. Tokita and Corina E. Tarnita, appears in the Jan. 8 issue of the Journal of the Royal Society Interface (DOI: 10.1098/rsif.2019.0564). Their work was supported by the National Science Foundation Graduate Research Fellowship under grant DGE1656466. This article is published as open access thanks to support from the Princeton University Library Open Access Publication Fund.