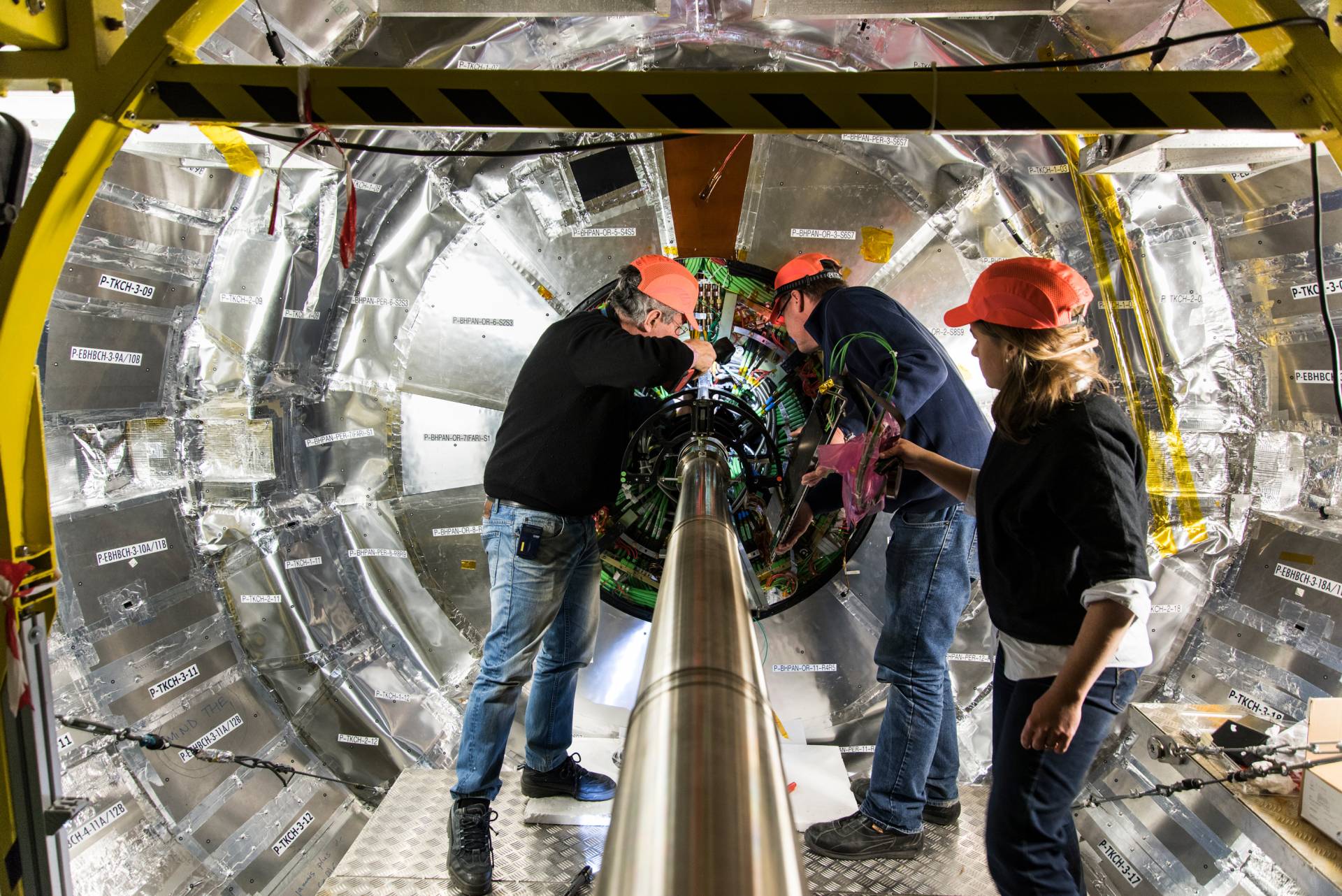 During a downtime period in which the Large Hadron Collider is not producing data, Princeton and CERN physicists work on the installation of the pixel luminosity telescope of the CMS experiment. Shown from left: David Stickland, Princeton; and Rob Loos and Anne Dabrowski, CERN.

With the goal of creating next-generation computing power to support high-energy physics research, the National Science Foundation (NSF) announced today that Princeton University will lead a new NSF-funded coalition of 17 research universities to be called the Institute for Research and Innovation in Software for High Energy Physics (IRIS-HEP).

The institute will develop computing software and expertise to enable a new era of discovery at the world's most powerful physics experiment, the Large Hadron Collider (LHC) at CERN in Geneva, Switzerland.

Over the next eight years, the LHC is getting a major upgrade called the High-Luminosity Large Hadron Collider (HL-LHC) project. The HL-LHC experiments will look for dark matter and, more generally, will search for new particles, interactions and physical principles. The $25 million in funds over five years for IRIS-HEP will drive innovations in data analysis and algorithms essential to handling the massive amounts of data generated by the HL-LHC. 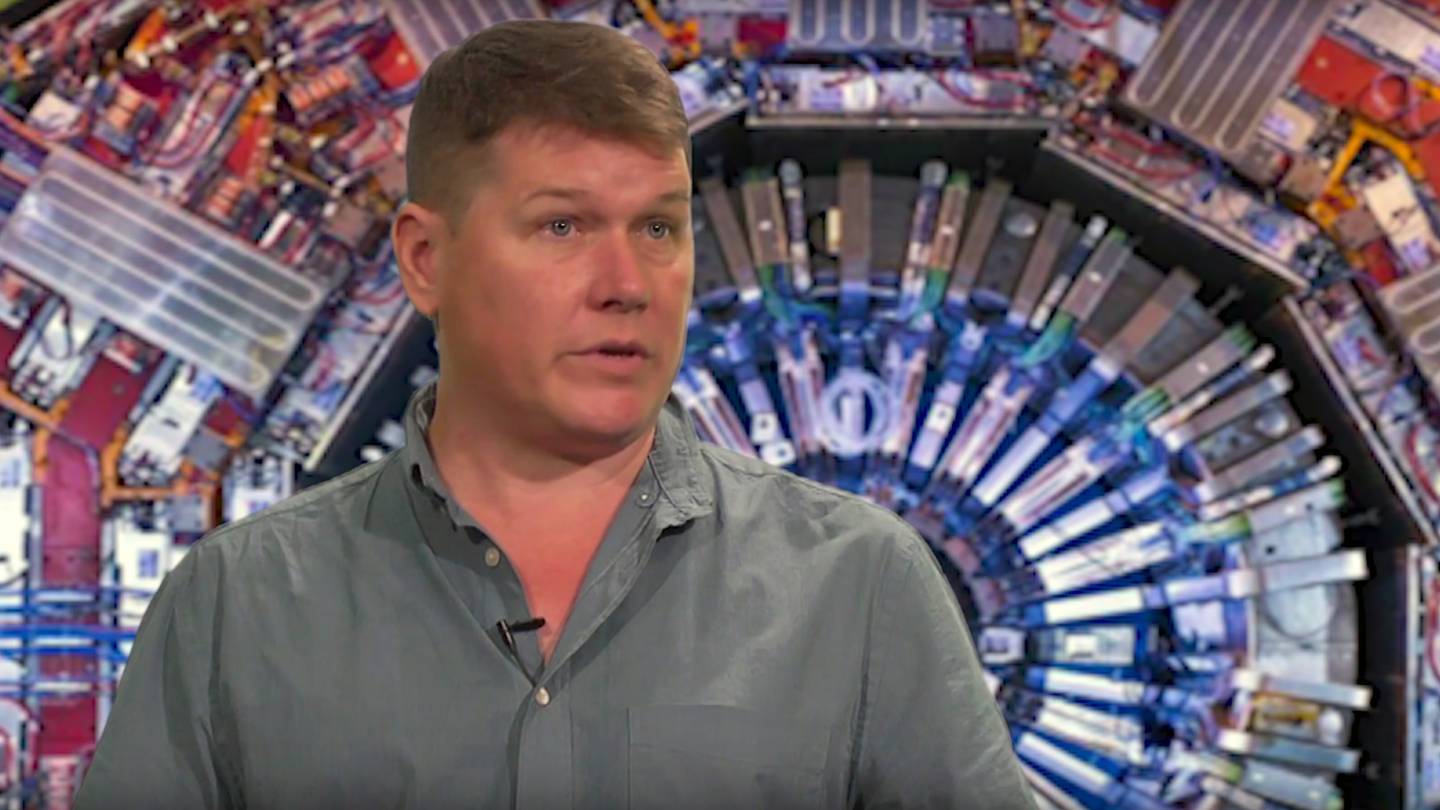 Peter Elmer, a computational physicist at Princeton, explains the need for high-speed computing to comb through the large data sets created in high-energy physics research from the Large Hadron Collider at CERN.

Video by the National Science Foundation

"This is really big data with a capital B-I-G," said Princeton University computational physicist Peter Elmer, the principal investigator for the institute and a CERN researcher. “This huge increase in data is needed to find the extremely rare ‘needle in a haystack’ signals that could indicate the presence of new physics phenomena. But to fully explore this data, we need much more powerful software tools and algorithms. We also need to maximally exploit the evolving high-performance computing landscape and new tools like machine learning, in which computers study existing data sets to learn rules that they can apply to new data and new situations.”

The LHC’s discovery of the Higgs boson particle in 2012 provided the last piece of what is known as the Standard Model of particle physics, a theory which describes the fundamental building blocks of nature and their interactions. “Physicists are itching to realize the full potential of the LHC and see what lies beyond the Standard Model,” said Elmer.

“What we plan to do physics-wise will be significantly more complex than what was done to discover the Higgs,” he said. “In the high-luminosity era, the LHC detectors will simultaneously record a very large number of overlapping particle collisions. From among these events, we will want to pick out the most interesting ones for further study. Our ability to choose effectively depends entirely on the strength and sophistication of our computational resources; IRIS-HEP will ensure that we have the right tools for the job.”

IRIS-HEP will be headquartered at the Princeton Institute for Computational Science and Engineering (PICSciE) and will otherwise be a virtual institute that will connect experiments, countries and disciplines regularly via networks and conferences.

Said Jeroen Tromp, director of PICSciE and professor of geosciences and applied and computational mathematics: “The institute will serve as an intellectual hub to build exciting cross-disciplinary exchanges between high-energy physics and computational science. PICSciE looks forward to helping with the related computational and data science education and training in the form of virtual and on-site workshops, summer schools and seminars."

The grant includes funds for training, education and outreach, including to the general public, and the institute will also work to enhance participation from women and minorities who are underrepresented in high-energy physics.

“The decision by the NSF to create this institute to support new research in high-energy physics is extremely important for our ability to make new discoveries about the fundamental nature of the universe,” said Princeton’s Dean for Research Pablo Debenedetti, who is the Class of 1950 Professor in Engineering and Applied Science and a professor of chemical and biological engineering.

“The methods that will be developed by the institute to analyze large amounts of data will be of use across numerous areas of scientific inquiry and will benefit not only physics but also will address many other research questions,” he said. “I am proud that Princeton will take the lead in organizing the institute and bringing together so many leading research institutions to develop new approaches in data science.” 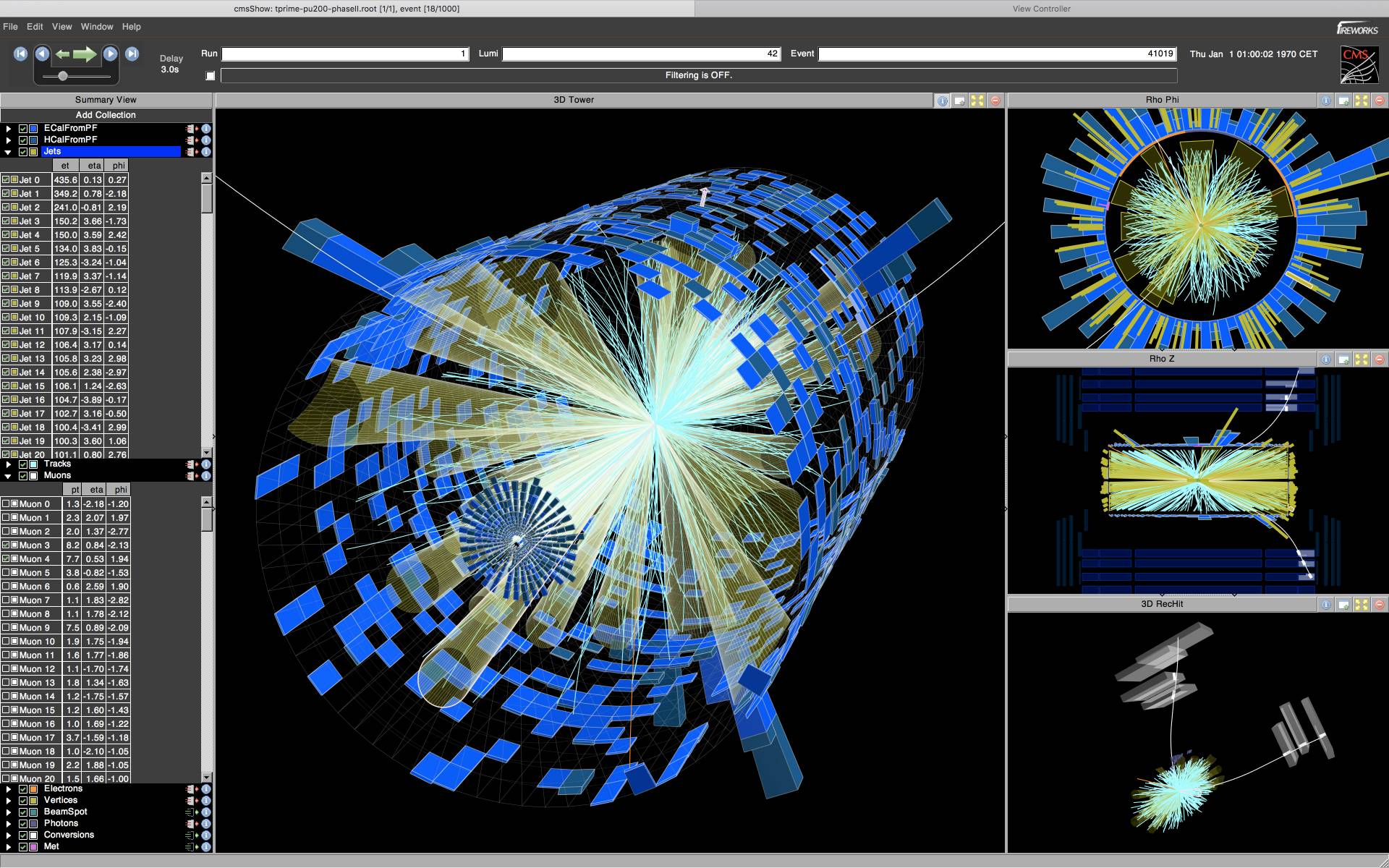 A visualization of data from a simulation of a possible signal for new physics in the CMS detector at the High-Luminosity LHC. An average of up to 200 background collisions will be visible in the LHC detectors at the same time as the signal, complicating the analysis of the data.

"Even now, physicists just can't store everything that the LHC produces," said Bogdan Mihaila, the NSF program officer overseeing the IRIS-HEP award. "Sophisticated processing helps us decide what information to keep and analyze, but even those tools won't be able to process all of the data we will see in 2026. We have to get smarter and step up our game. That is what the new software institute is about."

The IRIS-HEP project will be co-funded within NSF by the Office of Advanced Cyberinfrastructure in the Directorate for Computer and Information Science and Engineering; and the Division of Physics in the Mathematical and Physical Sciences Directorate.