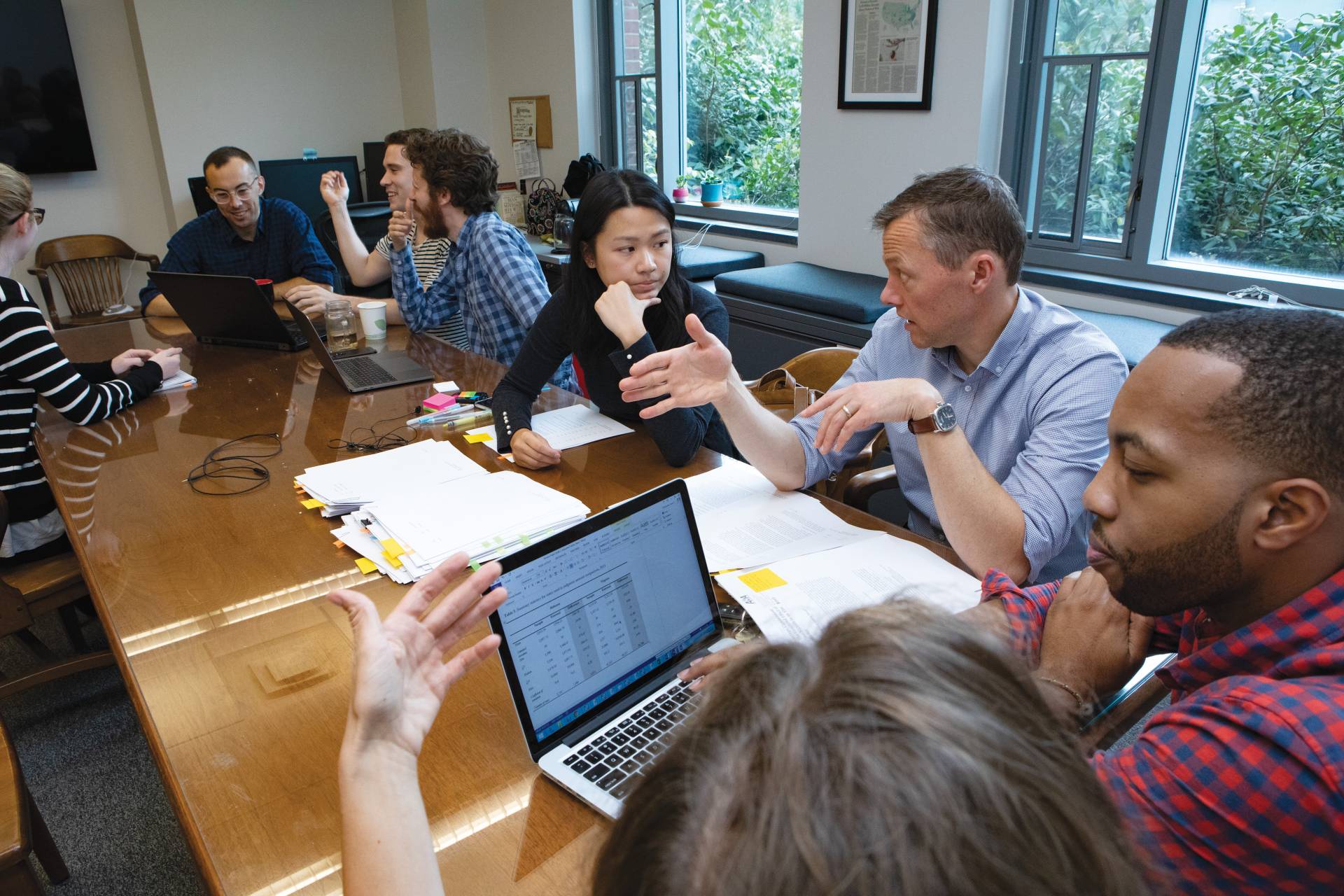 Eviction Lab examines the intersection of poverty and housing

Matthew Desmond (second from right), author of the Pulitzer Prize-winning 2016 bestseller "Evicted," and his team created a national database of eviction records, where visitors can see how their region stacks up against others, look at maps of eviction rates, and more.

How many Americans are forced to leave their homes each year?

When Matthew Desmond began investigating evictions in America, it was impossible to answer that question.

“Imagine if we didn’t know how many people got cancer every year, or graduated from high school,” said Desmond, Princeton’s Maurice P. During Professor of Sociology. “This is a major American problem.”

His initial deep dive into evictions in Milwaukee led to a 2016 bestseller, the Pulitzer Prize-winning "Evicted," in which he illustrated the profound connections between landlords, tenants, sheriffs and judges. In the years since, Desmond and the researchers in his Eviction Lab have gathered more than 80 million court records from across the country, painstakingly assembling, cleaning and processing data to create the first-ever national database of eviction records.

They found that about 2.3 million Americans lived in a home that received an eviction judgment in 2016, the most recent year for which they have complete data. And in Virginia that year, one in 10 evictions were for delinquencies less than $340, statistics that Desmond rattled off without notes.

“In 2016 we heard a lot about the opioid crisis, and rightfully so — there were about 65,000 people that overdosed that year,” said Desmond, who joined Princeton’s faculty in summer 2017. “But that means that for every tragic overdose death, there were 36 people put out on the street. And that’s not ‘probably’ an underestimate, that’s absolutely an underestimate, because we still have holes in our data.”

In April 2018, the team went public with evictionlab.org, where visitors can search for data on almost any city or state, see how their region stacks up against others, look at maps of eviction rates and much more.

“Seeing the map, you are struck by how many families are experiencing housing instability every day, every month, every year,” said Lillian Leung, a research specialist with the Eviction Lab. “It’s easy to think, ‘Oh, this is a problem far away from me,’ but the map shows that it’s happening everywhere — to people near us. If it’s local, it’s something you can take action on.”

“If you want to take data to your elected officials, our website will automatically create a report on counties you’ve been evaluating,” said James Hendrickson, a senior research specialist. “You can get your county’s eviction rate, statistics, demographic characteristics. That’s something you can directly take to your city council members, your U.S. representatives, your state senators.”

For their “bread-and-butter work,” the lab relies on the computers in the Office of Population Research (OPR), and they use the supercomputing clusters at the Princeton Institute for Computational Science and Engineering (PICSciE) for bigger projects, said Hendrickson.

“If it weren’t for the computing resources Princeton makes available to us through OPR and PICSciE, this work wouldn’t be possible,” said Adam Porton, a research specialist.

Understanding eviction data is an essential step in figuring out which policies can alleviate poverty in America, said Desmond. “We can’t ask those questions if we don’t have the data.”