Sixteen Princeton University students traveled to Washington, D.C., during fall 2018 to learn more about the intersection between technology and policymaking.

The three-day Tech Policy Boot Camp, organized through Princeton’s Center for Information Technology Policy (CITP) and held over fall break, introduced the students to governmental agencies, private organizations and key decision-makers that hold sway over how data and technology are used and regulated. 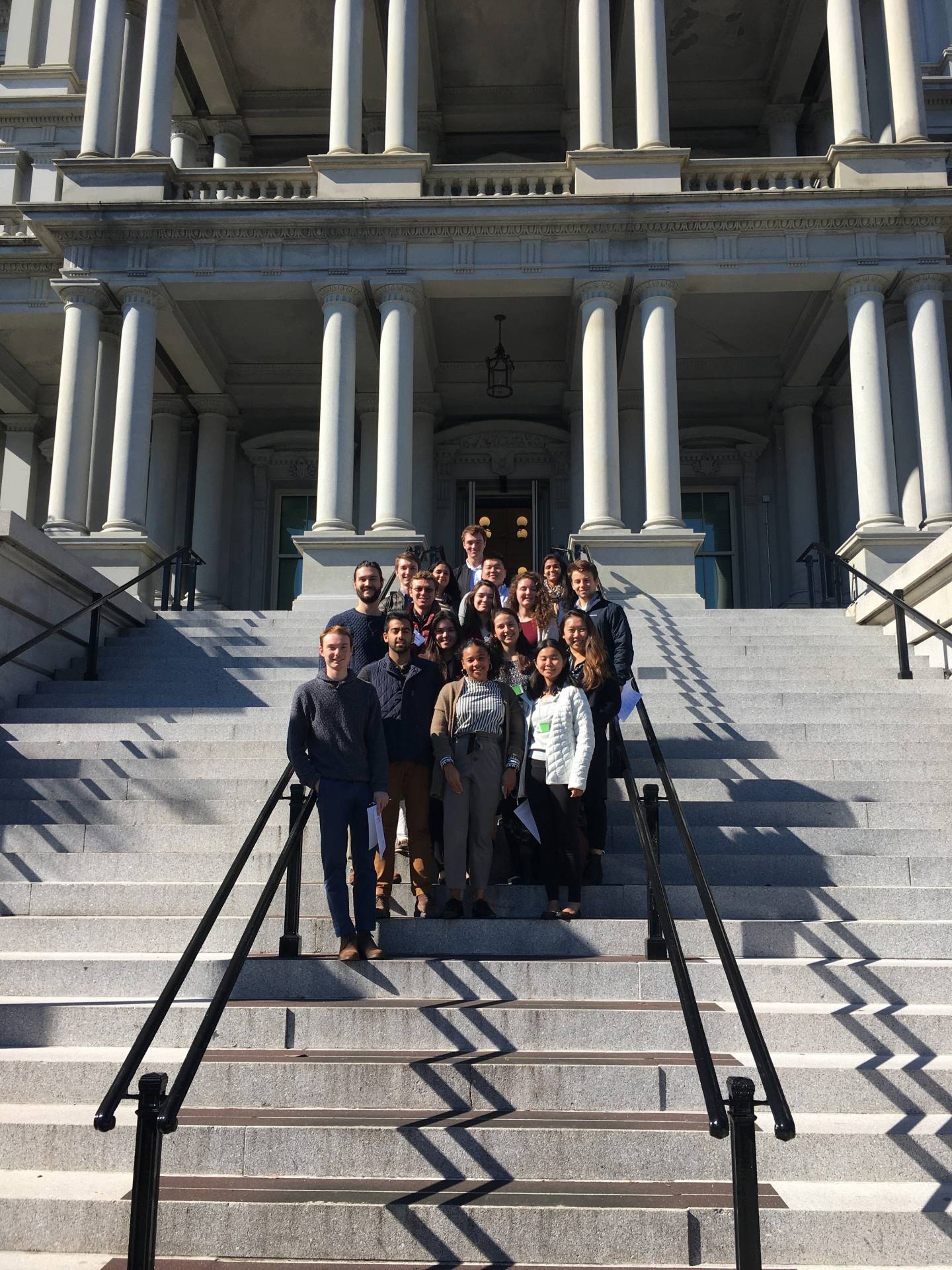 Sixteen Princeton students attended the Center for Information Technology Policy’s Tech Policy Boot Camp in Washington, D.C., last fall. The participants met with government officials and leaders in nonprofit organizations and business to learn about the many issues that arise from technology’s use in society. Here they pause for a photo on the steps of the Eisenhower Executive Office Building.

Undergraduate and graduate students attended, representing a variety of majors including computer science, African American studies, philosophy, economics and neuroscience. Among the stops on their tour were the National Telecommunications and Information Administration, the Federal Trade Commission (FTC), the United States Digital Service (USDS), New America, the Center for Democracy and Technology, and Cisco Systems.

“As our society increasingly leans on data-driven tools, the technology policy boot camp provides students with the opportunity to learn how government agencies, nonprofits and the industry tackle some of our most difficult data and technology policy challenges,” said Tithi Chattopadhyay, associate director of CITP. “It also helps students from a broad range of disciplines understand new innovations in data science and their impact on society.”

In discussions with industry professionals, the students learned about technology policy issues including data privacy, security, ethics, diversity and technology access. They also had the opportunity to attend a mixer with Princeton alumni working in government and technology industry jobs.

The Tech Policy Boot Camp, now in its sixth year, is led by CITP Director Ed Felten, the Robert E. Kahn Professor of Computer Science and Public Affairs. Felten served as a technology adviser at the FTC and the White House during portions of the Obama administration. Last October, he was confirmed to the Privacy and Civil Liberties Oversight Board, a bipartisan agency within the executive branch.

The students shared their thoughts about the experience.

“As a philosophy major, this trip was a great opportunity for me to explore ways nontech majors can get involved in the tech space. My favorite organizations were the FTC and New America because they both focused heavily on public policy, law and research. New America introduced me to many tech-related research and fellowship opportunities for humanities majors. This trip gave me a better understanding of the challenges involved in regulating the tech industry. I’m now doing my spring junior paper on privacy rights on the internet. I’m excited to continue exploring ways I can be involved in the tech space through the knowledge and contacts I gained on this trip.”

“I attended the boot camp because I wanted to learn about how technical research can further the public good. As a computer scientist, I feel like it’s important for me to give back to society, and public policy seems like a great way to do so. The FTC was particularly relevant to my personal interests because it investigates deceptive trade practices, which is unfortunately common in the tech sector. I was surprised to see how passionate the people working at the FTC were about their jobs. They sincerely believed in the government’s responsibility to protect consumers. After going on this trip, I definitely want to integrate tech policy into my career, whether it’s through volunteering at the Internet Engineering Task Force or spending a few years at a government agency. This trip gave me the know-how to navigate the various agencies in Washington and an understanding of what their roles are.”

“I have always been interested not only in the problem-solving aspects of computer science and engineering, but also the ways in which it can be applied to improve society as a whole. I was absolutely fascinated by our visit to the USDS. The government is not exactly known for its high-speed, rapidly adapting modern technology infrastructure, but the USDS is trying to change that. USDS described itself to us as a startup within the White House whose goal is to take some of the most important technological systems within the government (veterans administration, health, immigration, security, etc.) and update the outdated infrastructure. As the USDS representatives explained to us, doing this can save millions of people’s pensions, health care, veteran benefits and lives. Despite the fact that I’m going into the software engineering industry after I graduate, insights that I gained from this trip may impact my future career trajectory. Because of this trip, I decided to pursue a certificate in technology and society (CITP’s certificate program), and I will be researching a social issue that I think is a critical part of tech policy.”

“As someone whose research interests lie in information technology policy, I was most interested in visiting the National Telecommunications and Information Administration, a government agency that specifically deals with telecommunications and information, which is commonly at the intersection of critical technology policy issues. If this experience has taught me anything, it’s that Washington needs more knowledgeable computer scientists to help drive technology policy. This trip has informed me of potential career paths that I wasn’t aware of before, and it gave me the knowledge to pursue them.”

Students interested in attending the fall 2019 Tech Policy Boot Camp can apply via the CITP website beginning in September. The center hosts public events on campus throughout the year, including conferences, lectures, luncheons and Washington, D.C., briefings.