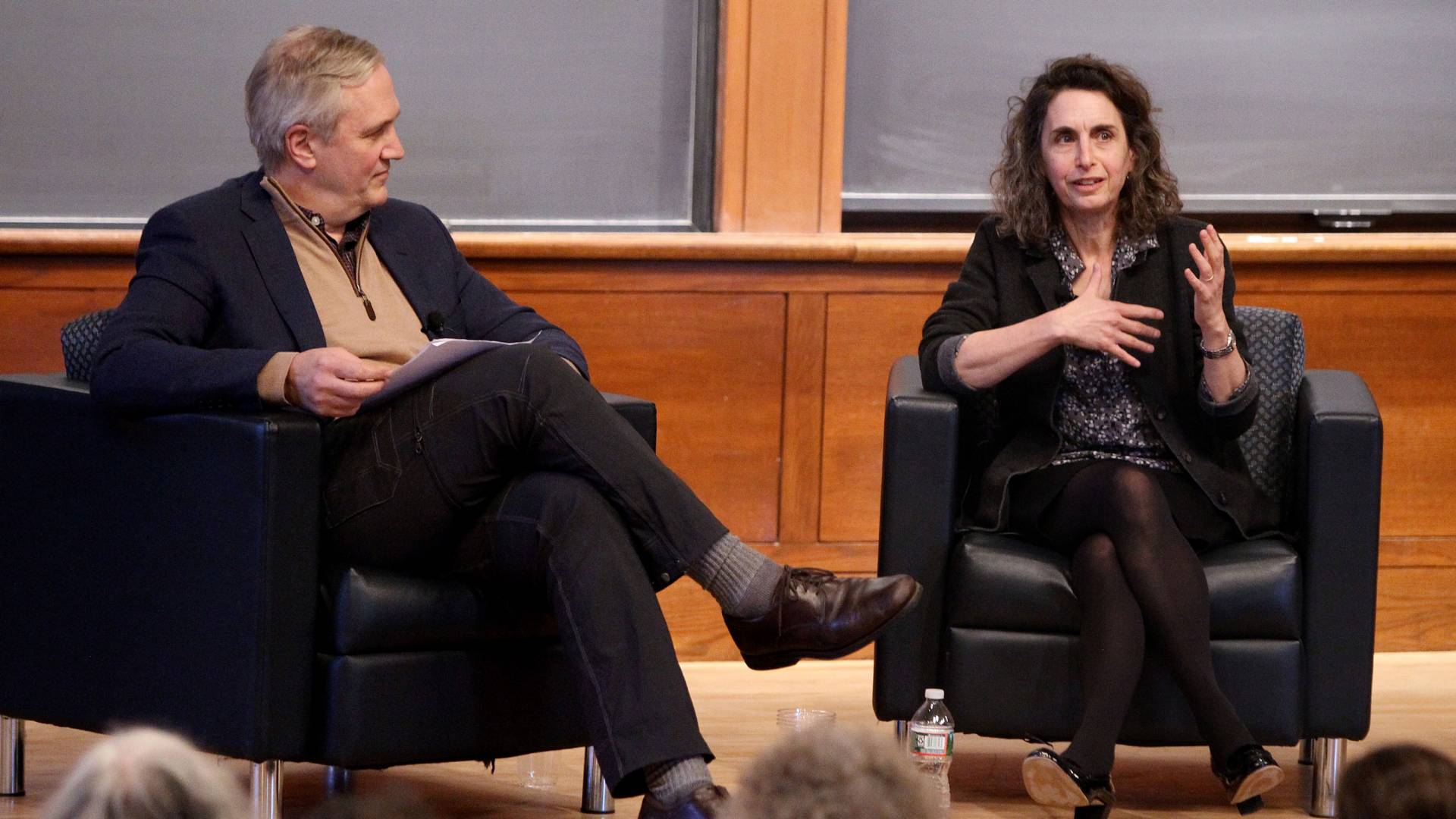 Journalist Elizabeth Kolbert talks about her Pulitzer Prize-winning book, “The Sixth Extinction: An Unnatural History,” and the human-driven loss of wildlife with Stephen Pacala, Princeton’s Frederick D. Petrie Professor in Ecology and Evolutionary Biology. Kolbert answered questions from Pacala and the audience about writing her book and the uncertain fate of Earth’s plants and animals.

“Every species has an independent right to existence that transcends their utility.” With that, journalist and author Elizabeth Kolbert set the tone of her appearance at Princeton University on Feb. 21 — one of deep concern for the fate of the planet.

Kolbert, the Pulitzer Prize-winning author of the book “The Sixth Extinction: An Unnatural History,” discussed the human-driven loss of wildlife and biodiversity with Stephen Pacala, Princeton’s Frederick D. Petrie Professor in Ecology and Evolutionary Biology, before a packed house in McCosh Hall, Room 50. The event was the latest in the Taplin Environmental Lecture Series sponsored by the Princeton Environmental Institute (PEI).

Kolbert took questions from Pacala, and later the audience, on the research and themes contained in “The Sixth Extinction,” which documents the widespread disappearance of species due to climate change, environmental destruction, habitat fragmentation, and the spread of invasive species and diseases. Kolbert interviewed researchers around the world about the loss and conservation of plant and animal species. She combined her field reporting with an intellectual and natural history of mass extinctions to show a common trait — changes happen too quickly for species to adapt.

“The Sixth Extinction” also seems like a “deeply personal book,” said Pacala, a former director of PEI who made the book a central text in the environmental studies course he developed, “The Environmental Nexus.” Kolbert explained that it has a “my-own-backyard” origin, starting with her awareness of the amphibian extinction crisis and the disappearance of tadpoles around her house.

“I found this so alarming, it just wasn’t getting enough attention that frogs and toads were going extinct at this outrageous rate. I was looking for quite a while for a way to bring this story home to people,” she said.

Kolbert said she interviewed researchers around the world so that their experiences would illustrate the changes taking place. “It’s actually quite hard to find vivid examples where you can go and see, OK this is climate change driving extinction,” she said.

Pacala observed that a lot had happened since Kolbert wrote the book in 2016: the election of President Donald Trump, the weakening of The Endangered Species Act, the rise of populism in Brazil that again threatens the Amazon rainforest, and the Yellow Vest protests in France against the carbon tax. “These are just a few of the kind of horror shows we have going on out there. There’s not a lot to be optimistic about,” Pacala said. “Are you more, or less worried since you wrote the book?”

“I always say, if you’re not pessimistic, you’re not paying attention,” Kolbert said, eliciting laughter from the audience.

“It’s very hard to look at the trend lines and the numbers and the political situation and not be extremely disturbed right now,” she continued. “I know there’s a lot of energy, and I’m hopeful that some of that energy will translate into action. But if you look at what’s actually happening, it’s pretty bleak.”

To Pacala’s question, would you write a different book if you wrote it today, Kolbert lamented: “The sad and awful thing is, I could add 10 chapters to the book. I can think of some horrible stories that are not in the book because I didn’t know about them at the time, but [that] had just emerged, and since the book was written, have unfortunately been confirmed,” she said. “So, I wouldn’t write a different book, but I could probably write, unfortunately, a scarier book.” 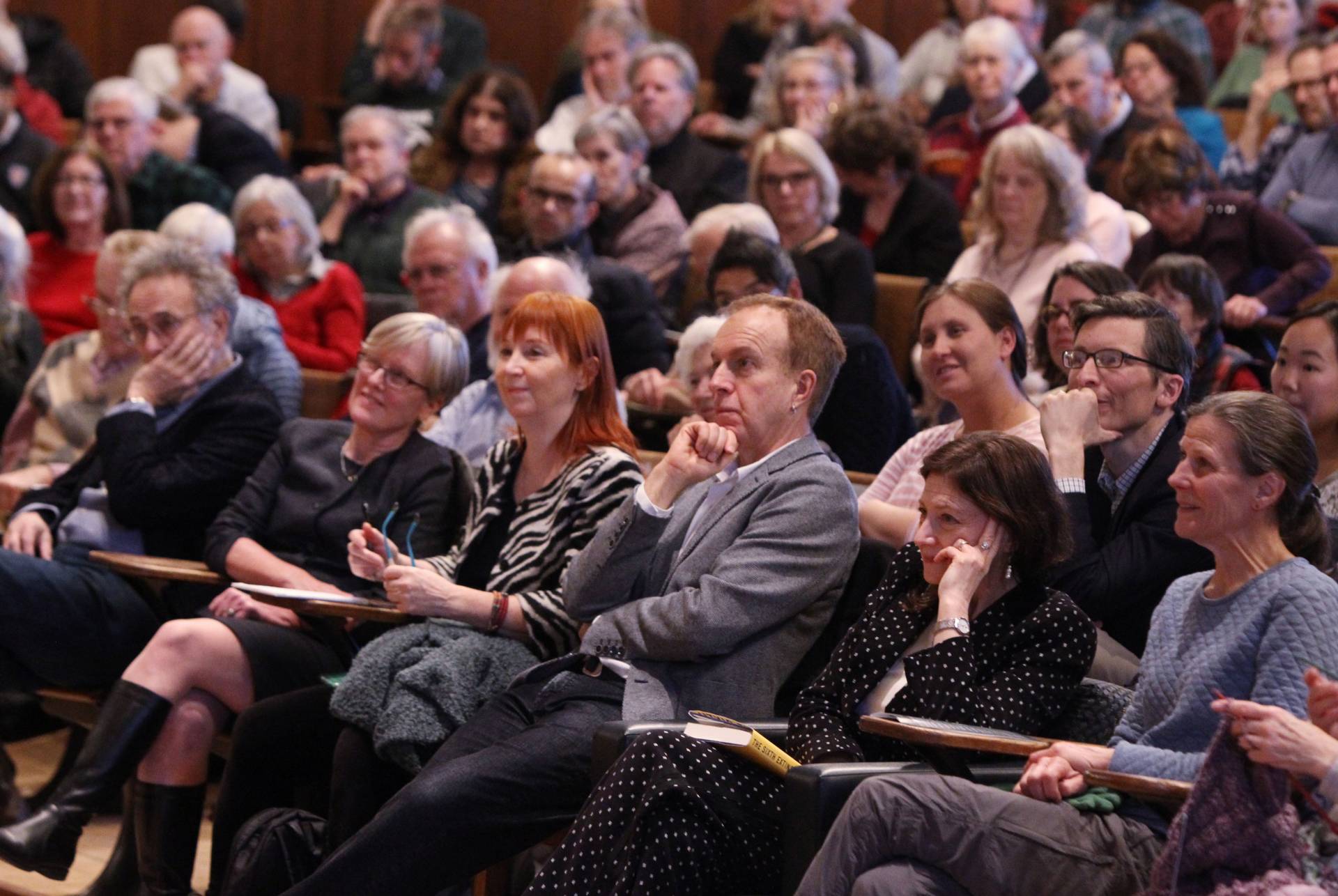 Kolbert and Pacala spoke in Princeton’s McCosh Hall, Room 50, before a packed audience of University faculty, students and people from the surrounding community. The event was introduced by Rob Nixon (center-right in gray blazer), the Thomas A. and Currie C. Barron Family Professor in Humanities and the Environment, and Princeton Provost Deborah Prentice (right in black).

Kolbert said that we’ve entered into “a triage situation” in which people increasingly have to select the species to save and to what extent. In many cases, these efforts begin as losing battles. “One of the experiences I had over and over again in researching the book was seeing these situations in which tremendous sums of money were being spent to preserve remnant populations of a species that would never be ecologically functional again.”

Pacala asked Kolbert how she would respond to people who say, for instance, "Don’t talk to me about polar bears when people are suffering in America’s inner cities.”

“I certainly don’t think we should be pitting one injustice against another,” Kolbert said. “We should talk about both. As Americans, as a developed world, we should try to figure out ways to prevent the Amazon from being cut down but take very seriously the problem of poverty in Brazil. Both of those should be doable items.”

She also noted that “it raises ethical questions of who gets to tell whom what to do — questions that may prevent us from averting a lot of the things that could potentially hurt us.”

Despite the gravity of the topic, there were moments of levity, beginning with an early digression in which Kolbert acknowledged, “I don’t think I’ve ever spoken from a stage to so many people I’ve interviewed! You know who you are.”

Another moment that drew laughter from the audience arose when Pacala asked Kolbert to explain the enormous success of her book. “Jon Stewart gets a lot of the credit, for having me on his show,” Kolbert said.

In bringing the conversation to a close before taking questions from the audience, Pacala asked, “What would you tell undergraduates they can do about climate change?”

“The multilayered nature of the problem makes it very difficult to offer a prescription for this. I don’t think there’s a simple answer here,” Kolbert said. “

“If I were king of the world,” she said, “I would say we should try to put pretty big swaths of the Earth that are still relatively intact aside for those creatures that currently reside on them. I think that’s our best hope at this point."