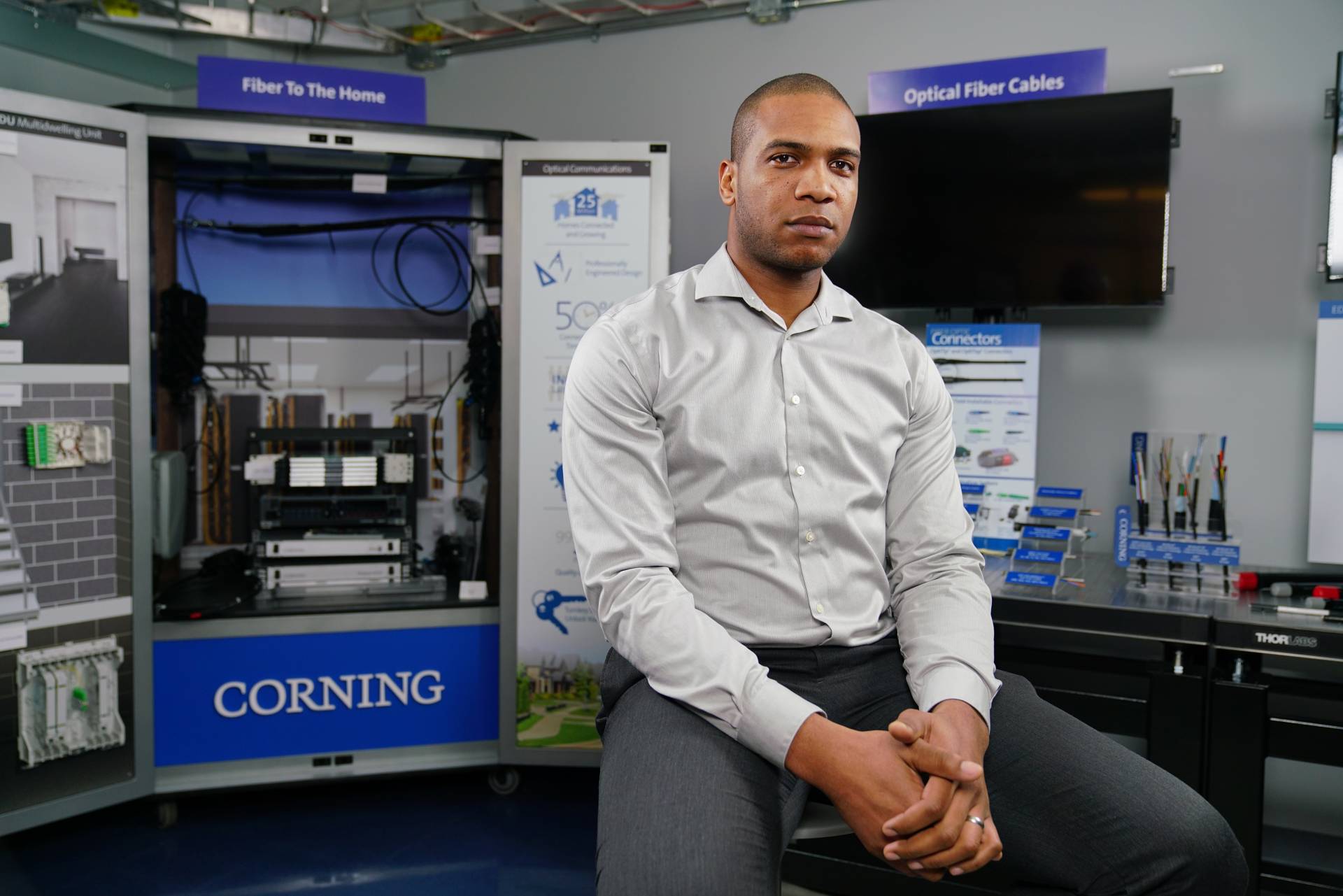 Princeton researchers including doctoral student Dane Christie, who is now a materials scientist at Corning, have developed a tool to examine polymers at the molecular scale.

Consider the humble tire. Sitting outside on a frigid winter day, it's hard as a stone, yet when spinning under a drag racer, a tire becomes warmly pliable. For everyday materials, from glass to rubber to plastic, these fundamental changes in behavior are determined by the glass transition temperature.

For engineers trying to come up with novel materials such as temperature-resistant plastics or flexible glass, the transition temperature is critical. Yet it isn't well-understood, especially at the level of matter's molecular building blocks — the nanoscale, mere billionths of a meter in size. In this diminutive realm, engineers need to control the transition temperature with unprecedented accuracy to create advanced materials with game-changing properties.

The work was the focus of Dane Christie’s time as a graduate student in chemical and biological engineering at Princeton. Now a materials scientist at Corning Inc., Christie spearheaded the development of a tool probing the transition temperate at the nanoscale level as his doctoral thesis. Richard Register, the Eugene Higgins Professor of Chemical and Biological Engineering, and Rodney Priestley, associate professor of chemical and biological engineering, co-advised Christie during his project. The Princeton professors are co-authors with Christie on two studies describing the tool and its early findings, published in ACS Central Science in February 2018 and Physical Review Letters in December 2018. 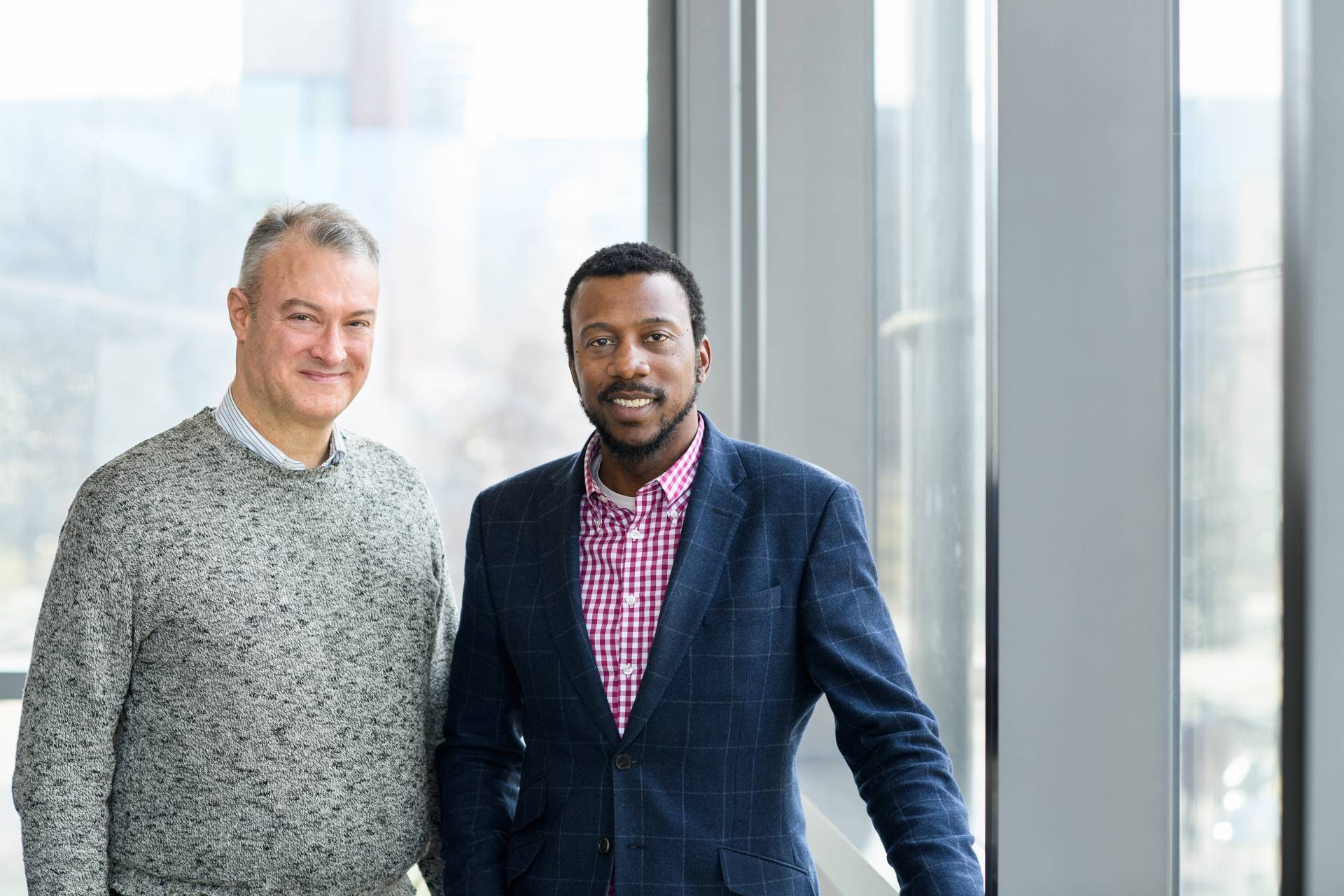 Because the two polymers resist mixing, the concentration of each component polymer often varies substantially over tiny areas. Therefore, to understand varying transition temperatures throughout a polymer mix, scientists need to precisely measure concentrations at multiple points over small scales.

The Princeton tool accomplishes this by attaching fluorescent reporter "tags" to select molecules in each of the polymers. The tags' brightness depends on whether the molecular region they're in is glassy or rubbery. In this way, the tool reveals the local transition temperature, offering insight into the factors influencing this all-important determinant of material behavior.

"Such spatially resolved information has long been sought, but nobody knew a way to approach the problem, since we don't have mechanical probes that can measure transition temperature on the nanometer scale," said Register. "Now that we've demonstrated the approach, we and others in the field can use it or build upon it to interrogate other complex polymer systems."

Register and Priestley came up with the general idea for Christie's thesis project as part of an Interdisciplinary Research Group proposal in the Princeton Center for Complex Materials, where Priestley is associate director. After initially identifying the polymer system they wanted him to study, Christie ran with it. He created various polymers in the lab, characterized their molecular structure and made the fluorescence measurements.

"I synthesized a ton of polymers," said Christie. "I must have synthesized upwards of 60 unique polymer architectures in order to complete this study."

Christie performed the polymer synthesis work in Register's lab and did the materials characterization in Priestley's lab. Throughout the project, Register and Priestley closely advised Christie, through one-on-one as well as group meetings, collaboratively guiding him as his work began delivering important insights into nanostructured polymer chemistry.

"We each brought our knowledge and strengths to the collaboration: mine in block copolymer synthesis and characterization, Rod's in fluorescence measurements and the glass transition," said Register.

The model system examined during the project consisted of a combination of two polymers, PMMA and PBMA. The former is an acrylic glass, with trade names such as Plexiglas, while the latter is found in paints and also cardiovascular stents. The researchers picked these particular polymers because of the dramatic difference in their transition temperatures: 105 degrees Celsius (221 degrees Fahrenheit) for PMMA and 20 degrees Celsius (68 degrees Fahrenheit) for PBMA. This large divide made transition temperature perturbations easier to observe and quantify. Further, the chemical composition of the two substances allowed for a special polymer unit with a light-sensitive molecule to be placed at any desired position within the substances' chain-like structures. The targeted approach let Christie take fluorescence measurements reporting on transition temperature anywhere inside the blended polymers.

When analyzed with the aid of a computational model, the measurements brought to light the inner workings of the two polymers' interactions. The individual molecules of each polymer were affected in their transition temperature not only by their varying local concentrations, but also by their proximity and chemical bond attachment to regions of differing concentrations, as shown in the ACS Central Science Paper.

The Physical Review Letters paper refined this further. For this follow-up study, Christie hung fluorescent labels on polymer chains away from the interface of two molecular regions, testing the impact of nearness versus actual linkage. This study indicated that the latter mechanism of attachment had the more significant effect on transition temperature.

"Resistant to fundamental theory and ill-defined in experiment, yet central to so many processes and applications, the glass transition represents an enduring challenge in polymer science," wrote Timothy Lodge, a professor of chemical engineering and materials science at the University of Minnesota, in a commentary in ACS Central Science about the Princeton researchers' work.

"Through an elegant combination of advanced synthesis and precise experiment, Christie, Register and Priestley report the first direct measurement of transition temperature as a function of location within a bulk nanostructured polymer material," wrote Lodge, who was not involved in the research. "This work opens the door to a wide range of further studies."

Such studies could focus on better understanding and improving familiar kinds of filled polymers, like those constituting rubber tires. Other ways forward involve engineering promising new materials based on nanocomposites, which might exhibit extreme flexibility or resiliency to stress. Still other applications include designing artificial membranes for use in fuel cells, advanced batteries and water treatment.

"While we used a particular label and polymerization chemistry for our system, the general approach is not limited to that," said Priestley. "The approach we all developed and Dane executed so successfully could now be applied to complex polymer systems of practical interest."

The work was supported by the National Science Foundation and the Air Force Office of Science Research.