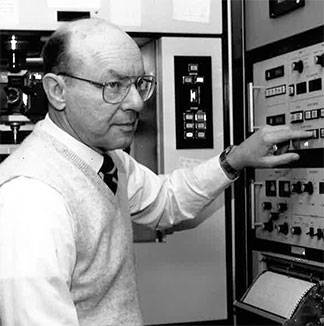 William Graessley, a Princeton professor of chemical engineering emeritus who spent his career seeking elegant solutions to problems involving long, entangled molecules known as polymers, died on Feb. 18 near Evanston, Illinois. He was 83.

In a varied career, Graessley, who joined the Princeton faculty in 1987, spent a decade teaching chemical engineering students at Princeton about the characteristics of the ubiquitous molecules that play key roles in everything from biology to industrial plastics. Graessley's two volumes on polymeric liquids and networks, written after his retirement from the University in 1998, have become a standard in the field.

"In many ways, those books were his real magnum opus," said Richard Register, the Eugene Higgins Professor of Chemical and Biological Engineering. "They certainly draw on his own research, but they are much broader than that, they are views of the entire field."

Ramanan Krishnamoorti, a professor of chemical and biomolecular engineering at the University of Houston, studied under Graessley at Princeton and remembers him as "an amazing mentor, gently guiding me to being a better person."

"The scientific work that he exemplified, and many of us as his students learned, was that the simplest physically elegant models were usually the best to understand complex phenomena," said Krishnamoorti, who also serves as chief energy officer and the interim vice chancellor for research and technology transfer at the University of Houston.

During his career, Graessley moved between industry and academia, holding faculty appointments at Northwestern University and Princeton as well as a research position at Exxon. He specialized in two areas of polymer research. The first involved how the entanglement of polymers at the molecular level, like spaghetti in a bowl, affects the flow of liquid polymer. Unlocking the mechanisms of polymer flow is important not only for better understanding the material, but for manufacturing processes that rely on working with polymers.

The entanglement can make understanding the details of polymers flow, which is important for manufacturing, much more difficult, said Register, who co-taught an undergraduate polymer class with Graessley during his time at Princeton. "Quantitatively understanding this was a key part of Bill's research."

Later in his career, Graessley began to research the mixing of polyolefins, the type of polymer used to make plastic bags and pipes frequently used in plumbing.  Because polyolefins resist mixing, better understanding their behavior could allow for improvements in materials processing and recycling.

Scott Wasserman, an associate R&D director at Dow Chemical and one of Graessley's former students, said that for 25 years he has applied the lessons he learned under Graessley.

"The greatest lesson was to see things on a molecular level and to appreciate the critical need to picture not only single reference molecules in complex systems, but to allow for the surrounding molecules to be moving as well," he said.

Wasserman said that his father worked as a laboratory technician at Exxon and was a contemporary of Graessley at the company. He recalled that his father and his co-workers encouraged him to study under Graessley because of his reputation as a researcher at Exxon. "Shortly after I joined Professor Graessley's research group at Princeton, my father was there to visit," Wasserman said. "I will never forget Professor Graessley graciously inviting us into his office to sit down and chat for a while. Twenty-seven years later I remember it as if it was yesterday."

William Schowalter, the Class of 1950 Professor of Engineering and Applied Science, Emeritus, and a colleague, described Graessley as a careful researcher who merged insights gained from his time in industry and academia. He said Graessley had left Northwestern at a time when Exxon was building a leading research lab in New Jersey and offered opportunities not typically available at universities.

"He was a better researcher because of his time at Exxon and at Northwestern," Schowalter said. Personally, he said, Graessley was a private man and a dedicated scholar. "He was a wonderful colleague."