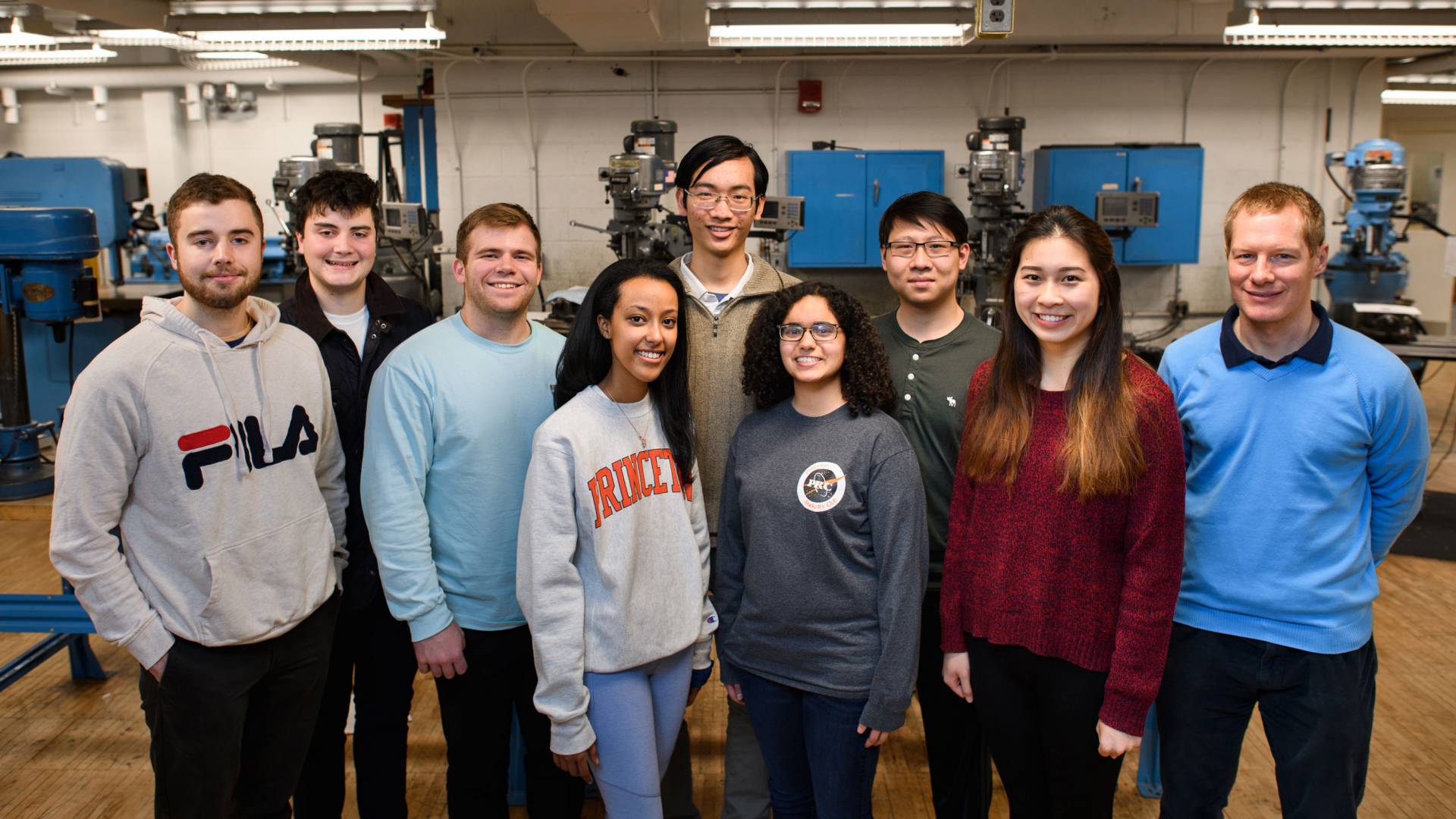 Jen Miller for the Office of Engineering Communications

A team from the Princeton Rocketry Club, shown with faculty adviser Andrej Košmrlj (far right), is competing in NASA’s design challenge for space exploration. The team is designing a robot gripper to hold and manipulate objects.

When picturing a robot designed to do a human task, such as moving a delicate instrument, it’s logical to see it as something that looks like a human.

But when the Princeton Rocketry Club took on NASA’s annual challenge that has students design, build and test a tool or device to address a real space exploration challenge, they went in the opposite direction. Instead of designing a hand-like device that could take ice core samples and move instruments underwater, they designed a gripper that looks like a mini beanbag. It molds itself to an object, then air is sucked out of the device so it grabs onto and pulls whatever it’s been set to hold.

“We figured that if it was simple, it was less likely to fail,” said Nina Arcot, a junior majoring in mechanical and aerospace engineering, who is vice president of community and outreach for the Princeton Rocketry Club.

NASA agreed. After reviewing the students’ proposed design, the space agency selected them as one of four teams to turn their ideas into reality, and test them on site at the NASA Johnson Space Center Neutral Buoyancy Laboratory in Houston from June 3-6.

This isn’t the first time that the Rocketry Club, which was founded in 2015, has entered  challenges and competitions. In fact, the club has five teams within its group, working on five different projects, including those for the Students for the Exploration and Development of Space and Spaceport America.

The impetus to keep their design simple came from another Princeton’s team entry last year into a different NASA challenge, which tasked students with developing a 1,000-square-meter solar array that could potentially be sent to and used on Mars.

Princeton was chosen among the five finalists for that competition, because NASA liked their design inspired from origami, which can neatly pack the solar array into a small space inside rocket. The Princeton team didn’t end up winning and NASA’s feedback was that the deployment mechanism for the solar array was too complicated, and left too many opportunities for things to go wrong considering it would be used on Mars’ harsh environment.

With that in mind, the focus this year was on simplicity, said Andrej Košmrlj, assistant professor of mechanical and aerospace engineering, who advised both teams participating in NASA challenges.

So while the obvious choice for this year’s gripper challenge may have been to “mimic a human hand with fingers that are going to be able to grab objects,” said Košmrlj, that approach raised complicated design choices.

The simple approach meant something that did not look human, said Alex Rogers, also a junior in the department,  who leads the club’s mechanical team.

“Robots have been designed to imitate humans when robots should be designed for a purpose,” said Rogers. While that approach sometimes works, the team saw no real reason “to go out of our way to make something that seems human and remind us of a human mechanism” if something else could work much better, he said.

Researchers from Columbia University, Cornell University and the University of Chicago began working with soft grippers (made from coffee beans in a balloon) in 2010, and the Princeton team picked up on this early work.

“We saw it could pick up a wide variety of objects, including an egg, without breaking it,” said Arcot, who has also been a materials science intern at NASA’s Langley Research Center.

Rogers said the team currently is building a prototype of their design that they’ll test in a tub of water, followed by in a pool Princeton has designed for underwater robots. The students will then perfect the design before they take it to NASA. They are also working with a NASA adviser along the way.

Arcot and Rogers said that doing these kinds of challenges through the Rocketry Club is not just a way to make connections at NASA, but to also put what they’re doing in class into physical form.

“To be presented with a problem and come up with a solution from scratch, and then have the opportunity to test it — that process is something that a lot of us will have to do when we’re working as engineers,” Arcot said. “Being able to work on a project from start to finish can be really valuable.”

“It’s not just a theoretical concept, but they have to figure out how to actually do this,” said Košmrlj.