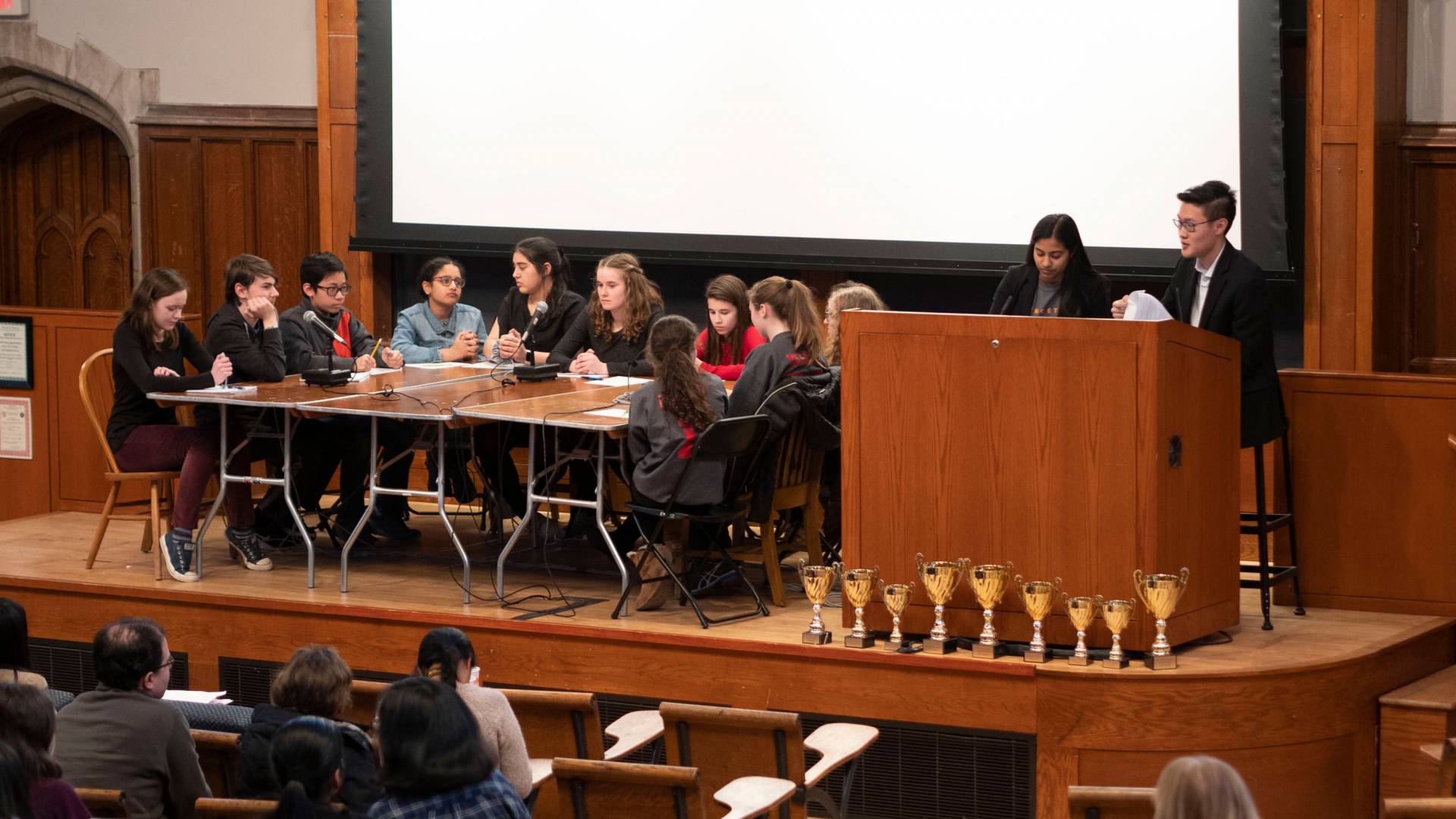 The second annual Princeton Certamen — a 21st-century twist on an ancient Roman “contest” — was held March 2. About 200 middle and high school students from 13 schools traveled to Princeton’s campus to compete, some coming from as far away as Wisconsin. Pictured: One team takes questions from moderators MaryAnn Placheril and Jason Tan, members of the Class of 2021.

It’s a Saturday morning just after 11 a.m., and Princeton sophomore Lucy Wang is seated at the front of a classroom in McCosh Hall. She begins to read a question aloud: “Which Roman author, born of a plebeian family, despised aristocracy, writing of the Metelli…” — but a buzz sounds before she can finish. “Naevius!” exclaims Dante Minutillo, a junior at the Boston Latin School, clutching the buzzer in his hand as he names a Roman author of the third century BCE, whose works survive today only as fragments. He is correct.

Ancient Rome met 21st-century game show at the second annual Princeton Certamen on March 2, organized for middle and high school students by undergraduates interested in classics. The word certamen means “contest” in Latin — an appropriate name for this quiz bowl focusing on the language, literature, culture and history of Ancient Rome. About 200 students from 13 schools traveled to Princeton’s campus to compete, some coming from as far away as Wisconsin.

Melissa Haynes, a lecturer in the Department of Classics, opened the event with a keynote address that played with the Latin phrase Res Novae. It can be literally rendered as “new things,” but in ancient Rome, a culture that eyed novelty with suspicion, this phrase carried a negative undertone of “political insurrection.” Her talk used the ambivalent meaning of “new” in Latin to explore the benefits and the dangers that evolving technology poses, especially as the discourse around classical antiquity moves to social media. She reminded the audience of budding classicists: “We are part of a bigger world now.” 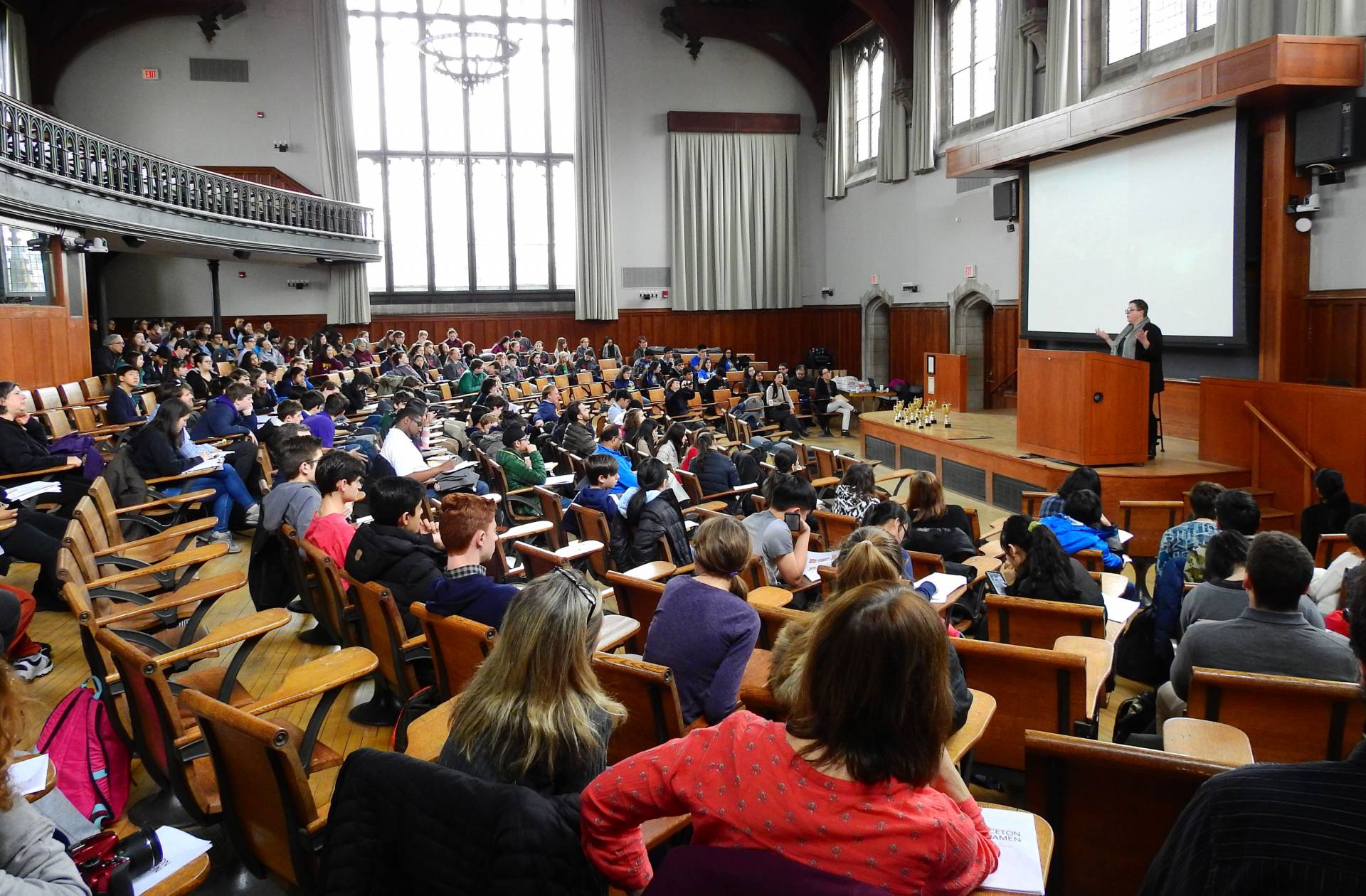 Melissa Haynes, a lecturer in the Department of Classics, opens the event with a keynote address connecting the study of Latin to contemporary issues including technology and social media.

From there, the students broke up into groups for quiz bowl rounds at different levels, from novice to advanced.

For experienced students like Minutillo, the event was another opportunity to flex both recall and reaction time. “I like that it allows me to combine knowledge with quick thinking,” he said.

While the students enjoyed the competitive thrill of the game, there was an undeniable collegiality and sportsmanship to the proceedings. High school sophomore Niels Armbruster, an advanced competitor from Brookfield Academy in Wisconsin, stressed the value of community. “Everyone comes here for one language,” he said. “Only Latin does that.”

Teammate Kyle Jain, a junior, echoed that common theme among the students about why they had come. “I love Latin,” he said. “This is one of the only places where you get to speak it.”

Students across all levels of competition said they enjoy the sense of community that the study of the ancient world gives them. 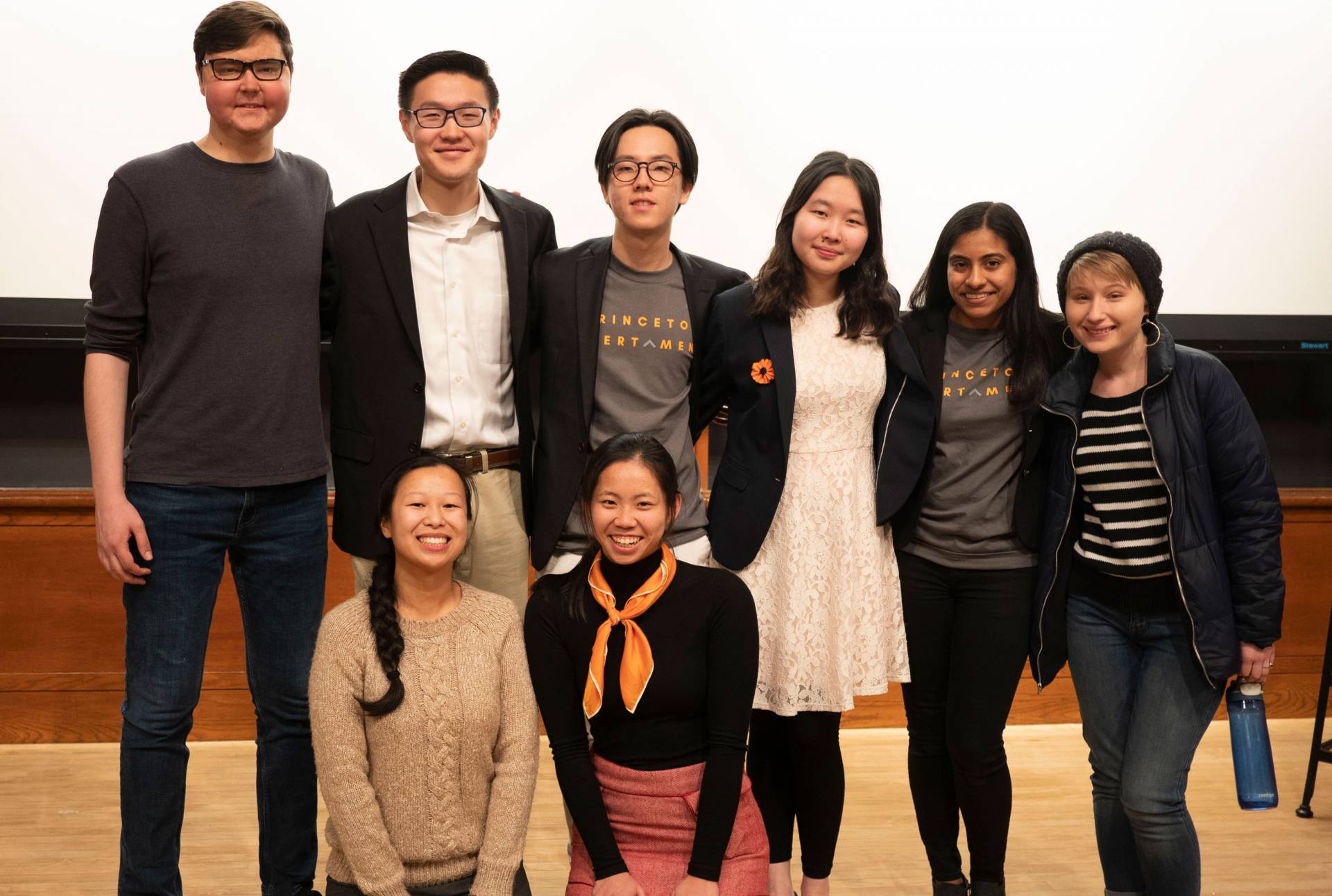 The undergraduate organizers, all of whom have an interest in classics, take a moment to celebrate the successful event.

First-time competitor India Lott, a junior at Townsend Harris School in Flushing, New York, said, “I’m more excited than nervous. I like being in a competitive environment.” Her teammate, junior Cathy Chen added, “It would be nice to win, but we’re here to have fun.”

Events like the Princeton Certamen would not be possible without the National Junior Classical League (NJCL). This organization for middle and high school students interested in classical studies includes some 50,000 members across 1,200 chapters, and sponsors a national competition at its convention each summer. The Princeton Certamen isn’t formally associated with the league, but is organized by NJCL alumni who work to produce the same style of event they enjoyed as participants. For many of the competitors, particularly those with national ambitions, these non-ranking certamen provide a good opportunity to practice for the coming season.

Last year’s inaugural Princeton Certamen was the brainchild of Joonho Jo, a member of the Class of 2021. Even before arriving on campus, Jo knew that he wanted to get involved in starting a certamen at Princeton, “with the purpose of bringing together a community of classicists from all over the country and spreading the love for the classics in an entertaining day of competition,” he said.

It was a significant undertaking. First, an official Classics Club had to be formed, funding secured and a website created. Then came the myriad tasks of organizing a large annual event, from reserving rooms to ordering trophies. Jo worked with fellow sophomores and NJCL alumni Lucy Wang, Jason Tan and MaryAnn Placheril, and received helpful guidance from senior Tashi Treadway and financial support from the classics department.

Following several rounds, this year’s Princeton Certamen culminated in an award ceremony recognizing the most successful competitors at each level. Afterward, Jo reflected on what makes it worthwhile. “All of the time spent planning, publicizing and running the event becomes so meaningful when I see even one student's eyes light up upon a correct answer or a fist pump at the end of the round,” he said.