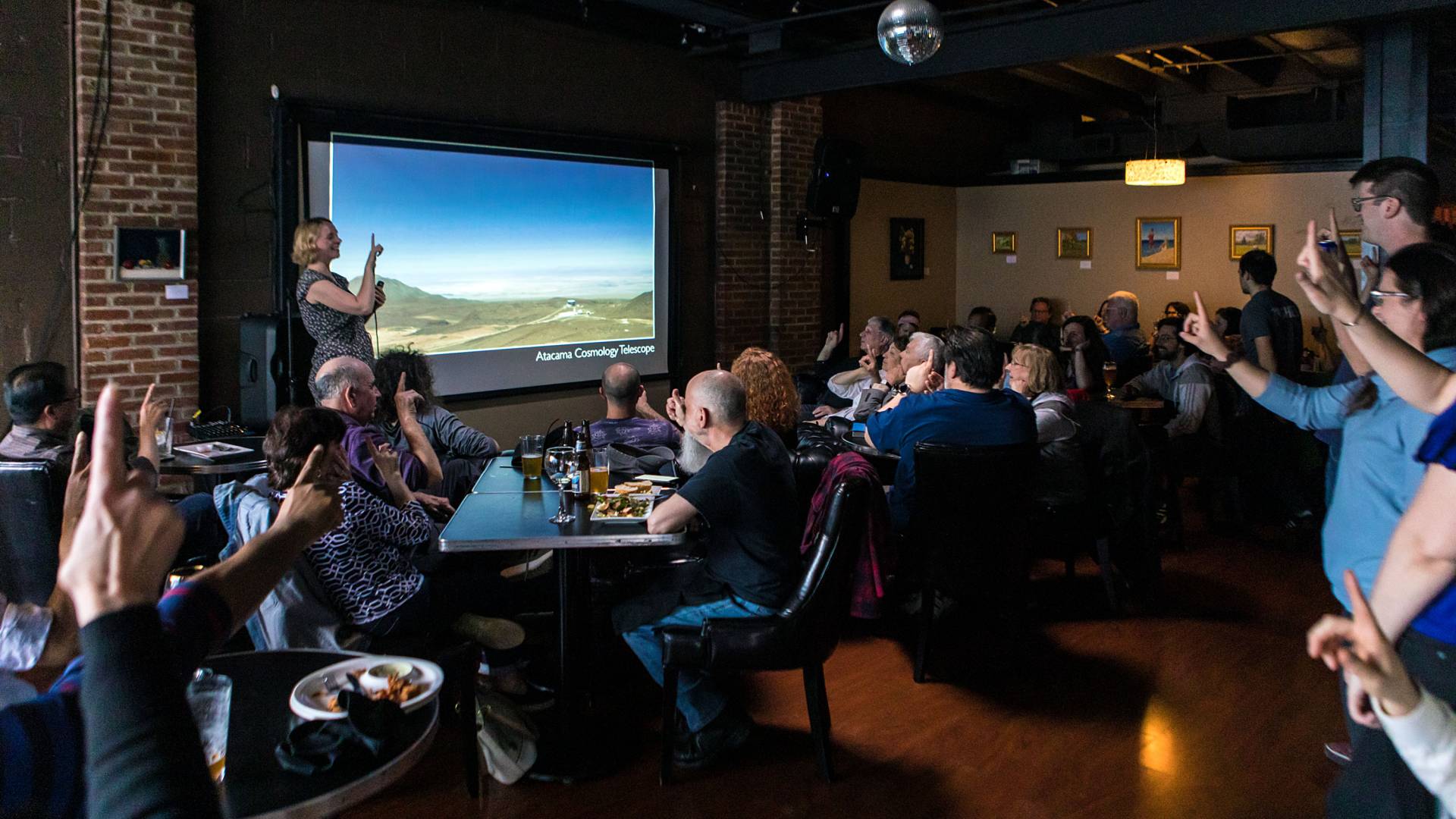 Princeton University astrophysicist Jo Dunkley presents “Measuring the Universe” at Astronomy on Tap: Trenton, one of a series of free public outreach programs organized by astrophysics graduate students and postdoctoral researchers. Here, Dunkley and the audience members are demonstrating parallax, the astronomical tool for measuring distance, by looking at a finger with first one eye, then the other — and then repeating it with their arms outstretched. Astronomers used a variation of that technique to measure the distance to Venus in 1761.

Take a group of eager young astronomers, then add a standing-room-only crowd, free admission, tasty treats (not free) and a trivia quiz, and host the whole mix in downtown Trenton, and you get Astronomy on Tap: Trenton, a public outreach project supported by Princeton’s Department of Astrophysical Sciences.

“Contemplating the secrets of the universe is a privilege often not afforded to someone like my mother,” who cleans houses and is usually paid under the table, said graduate student and group co-founder Melinda Soares-Furtado. “I wanted to participate in Astronomy on Tap so that the underserved members of my community can learn about the astrophysical wonders that have brought me so much joy.”

And there’s a personal benefit, too, she added: “There is this incredible fullness in my chest that I feel when someone contemplates the vastness of space for the first time. I want to keep feeling that.”

Soares-Furtado is one of a group of young astrophysicists — graduate students and postdoctoral researchers — who are bringing world-class astronomers, cosmologists and astrophysicists to Trenton Social, a restaurant and bar near CURE Insurance Arena in downtown Trenton, New Jersey. All of the events are free and open to the public. 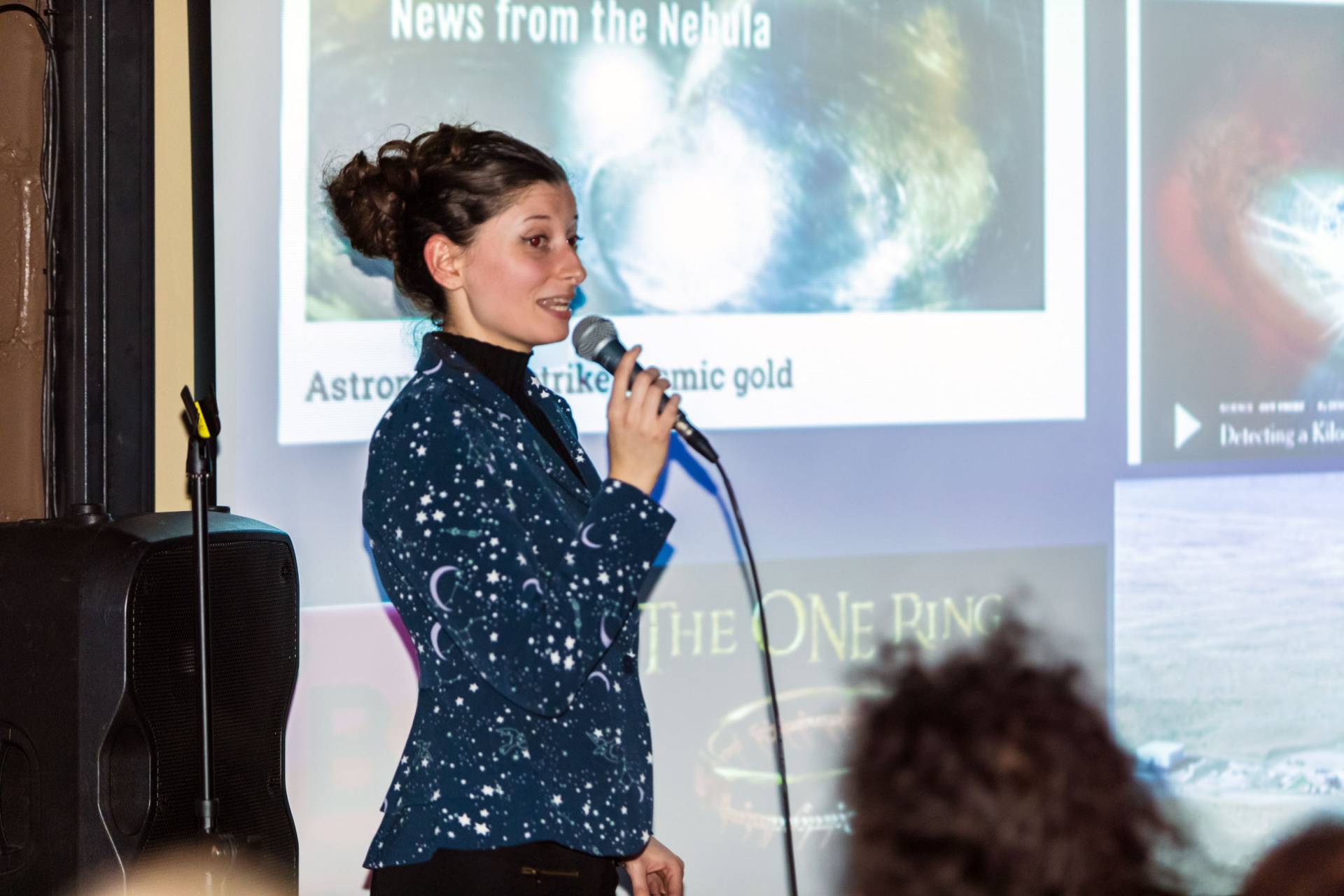 Graduate student Ivanna Escala introduces the speakers and warms up the crowd at the family-friendly Trenton Social. Escala is a visiting graduate student at Princeton who will receive her Ph.D. from the California Institute of Technology (Caltech).

The group has created a “satellite location” (pun definitely intended) of the umbrella group Astronomy on Tap (AoT), a worldwide networks of events where professional astronomers present their research in bars.

“I would describe it as a low-key pub talk put on by a friendly group of science enthusiasts,” said Soares-Furtado. “There is a quiz if you're into that sort of thing, but mostly there is an opportunity to learn something new about the universe in a welcoming environment.”

In Trenton, the family-friendly events take over the restaurant half of Trenton Social, where two astronomers or astrophysicists give 20-minute talks, interspersed with questions and comments from the audience.

Speakers mingle with the crowd between the two talks, while at the same time a trivia quiz lets audience members show off their astronomy knowledge. A few of the answers are provided by the talks — and helpfully, the organizers wait till after the second talk to collect the answer sheets — but most questions focus on general astronomy knowledge or current space-related events. At the end of the night, trivia winners receive prizes.

“We want to put on a good show at a place where you can have a burger and drink and learn about our incredible universe for an hour or so,” said Patrick Crumley, a postdoctoral research associate who is the department’s outreach coordinator and was one of the early organizers of AoT: Trenton. “The department has great researchers who are great public speakers, and I like to learn from them.” 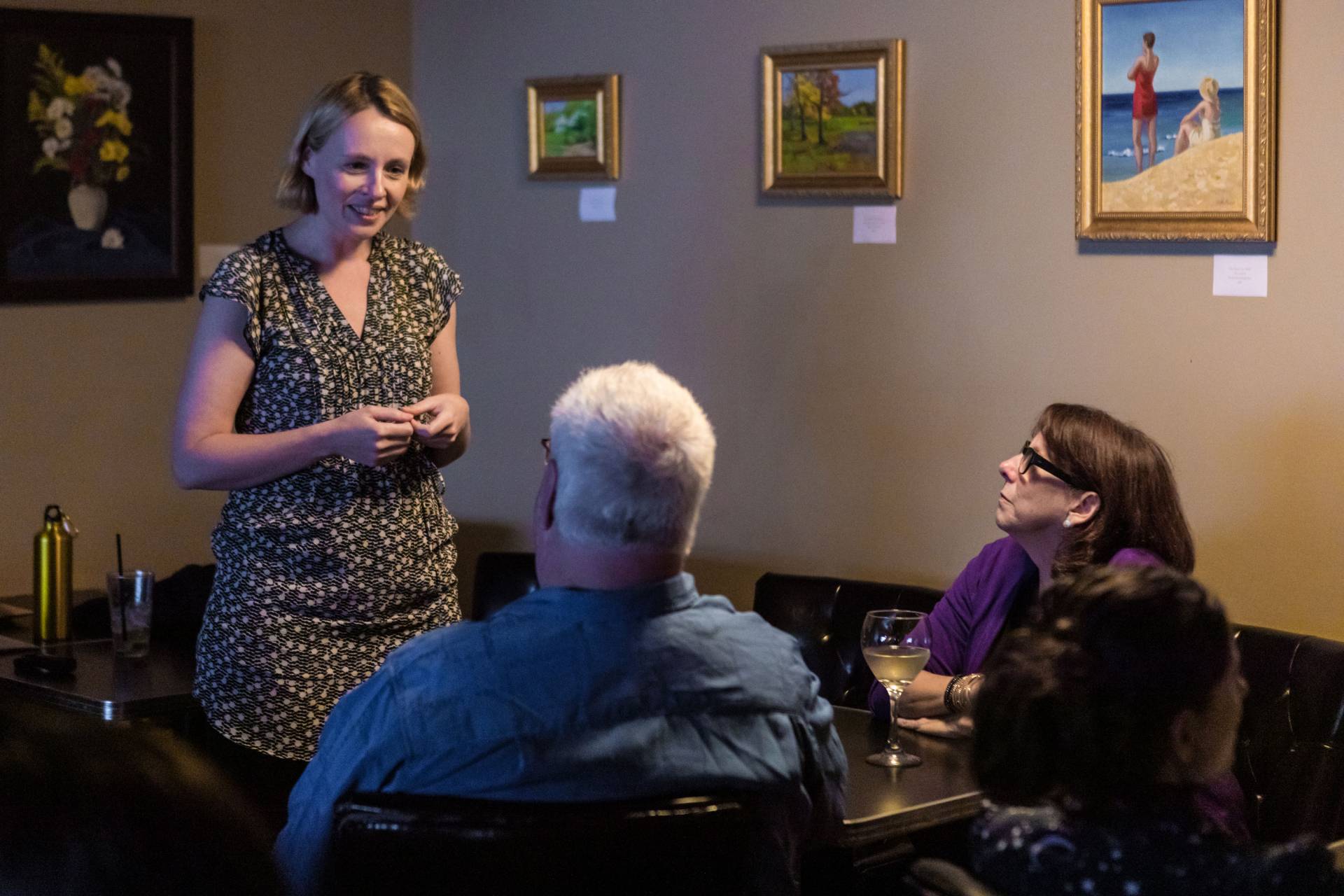 Dunkley chats with audience members between her talk and the next one.

The idea to create a branch of AoT started with Andrés Alejandro Plazas Malagón, an associate research scholar who had been involved in AoT: Pasadena and inaugurated AoT: St. Louis.

“I could see the potential and impact of this type of event, where scientists are closer to the general public in an informal and relaxed environment,” he said. He described public outreach as a “moral obligation,” since so much astronomy research is funded by taxpayers.

“Through AoT I would like for us to share all the cool things we do, get the public excited, get them to think about the cosmic perspective and our place in the cosmos,” Plazas Malagón said. “I would like for children to get inspired, and for parents to inspire their kids to consider a career in STEM fields. I would like to promote critical thinking and the scientific method — with its emphasis on facts and evidence — amongst the public in general.”

After hosting monthly events from January through June, the group decided to take July and August off, then start up again the third Wednesday in September. One of their fall events will be sponsored by NASA’s Chandra X-ray Center, to celebrate all the discoveries made by the Chandra telescope since its 1999 launch.

At the first AoT: Trenton event, held on Jan. 16, Soares-Furtado presented on “Planets Devoured by Their Host Stars.” During the February social, group co-organizers and graduate students Ivanna Escala and David Vartanyan presented on “Dangerous Galaxies: Strangulation and Cannibalism” and “Supernovae to Black Holes: From Stellar Death to Chemical Rebirth,” respectively. 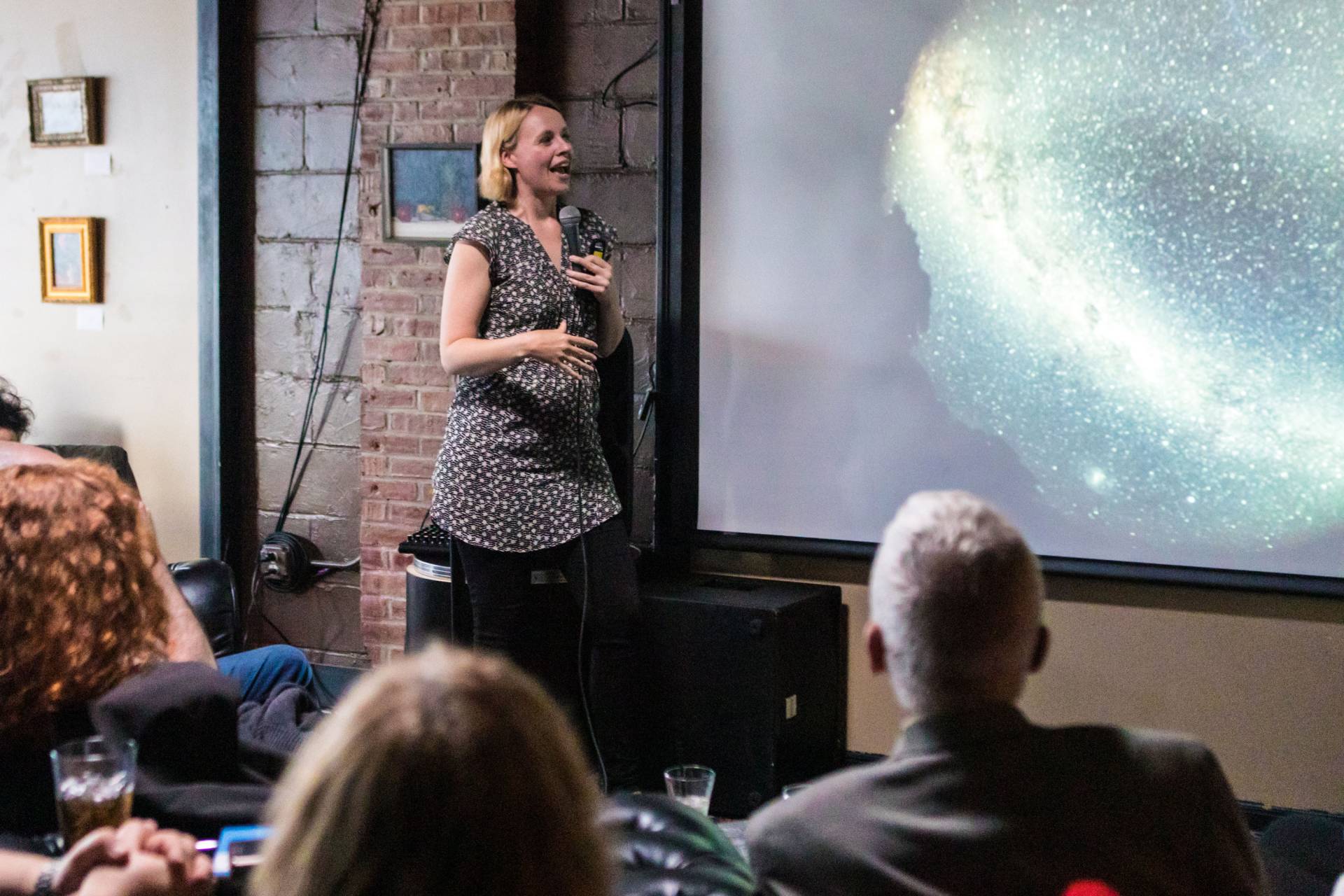 Astronomy on Tap is a worldwide network of free pub talks. The events at Trenton Social, organized by members of Princeton’s Department of Astrophysical Sciences and held the third Wednesday of each month, have all drawn standing-room-only crowds from Trenton and the surrounding towns. The organizers are taking July and August off; the next event is scheduled for Sept. 18.

During the months that followed, nearly everyone in the group presented an aspect of their research, as did Jo Dunkley, a professor of physics and astrophysics at Princeton, as well as a few non-Princetonians, including Eliot Quataert, a professor from the University of California-Berkeley. The program was initially funded by the researchers themselves, but the department soon stepped in to underwrite the events.

“Everyone who looks up at night has a natural interest in astronomy,” said Michael Strauss, professor and chair of astrophysical sciences. “The astrophysics department is delighted to have this opportunity to bring the joy and wonder of our subject to the community.”

While the group’s primary focus is outward, several of the student leaders described how much they appreciate the opportunity AoT provides to deepen relationships within the department, by bringing people from different fields together for a common purpose.

“I’ve gotten to know people in the department who I had only seen in passing before despite being here for three years!” said Sean Johnson, a NASA Hubble and Carnegie-Princeton Postdoctoral Fellow.

Beyond Trenton, AoT events have been held in at least 30 locations, including more than a dozen US states and in cities as far-flung as Taipei, Oslo and Santiago. And the list is rapidly growing; Plazas Malagón is currently helping a friend at the University of Pennsylvania launch AoT: Philadelphia. The native Spanish speaker is also working on adding Spanish-language events to AoT: Trenton, to reach the Hispanic community in the area.

“It's a remarkable opportunity to build community with those who share an interest in science,” said Soares-Furtado. “I couldn't be more thrilled. Having people in your department who care about impactful outreach makes all the difference.”

Astronomy on Tap: Trenton events are held the third Wednesday of the month at Trenton Social in Trenton, New Jersey. The events are sponsored by Trenton Social and Princeton’s Department of Astrophysical Sciences. The next event is currently scheduled for Sept. 18; for updates, follow AoT: Trenton on Facebook.