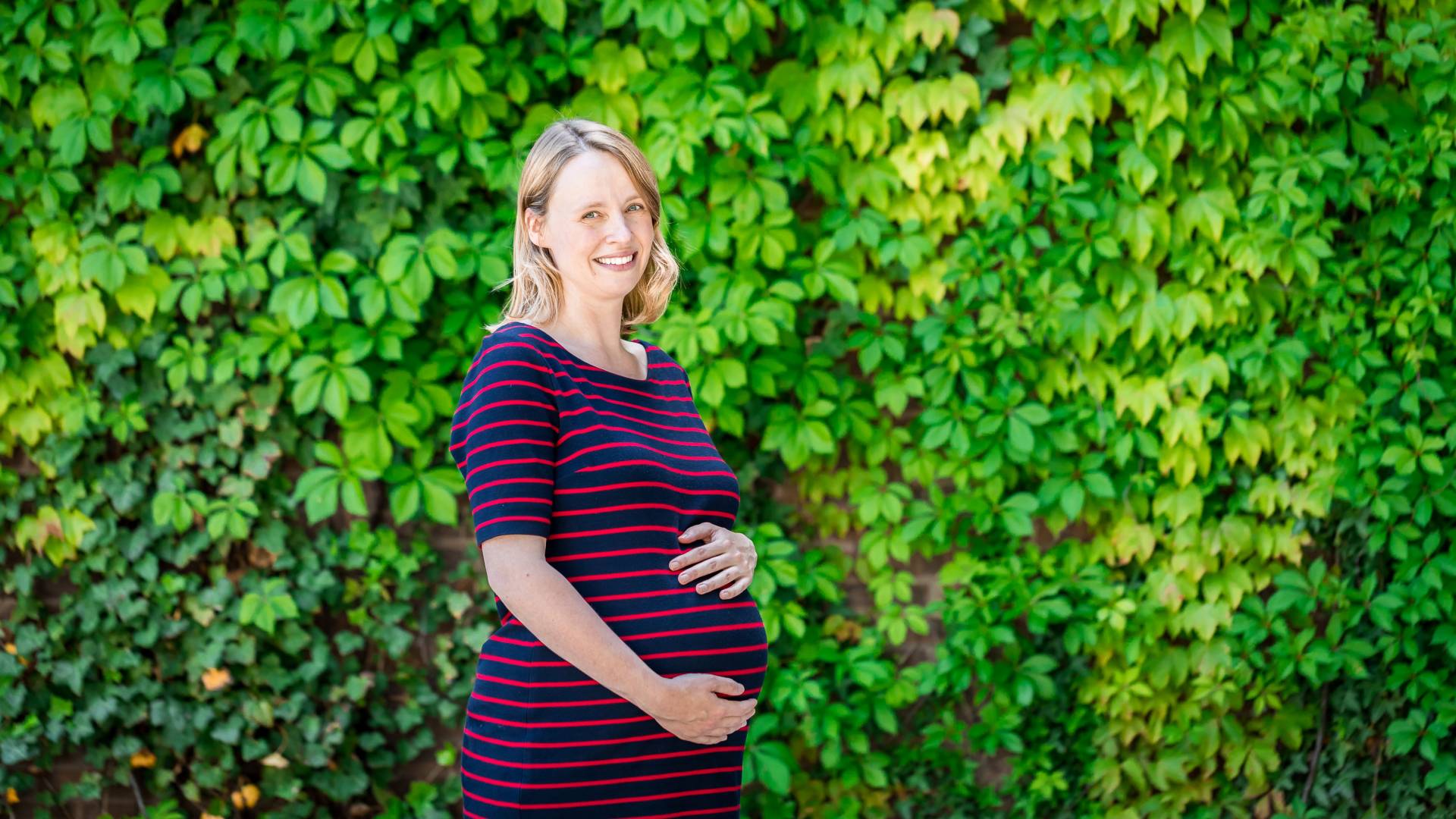 Jo Dunkley, a professor of physics and astrophysical sciences at Princeton, asks big questions about the universe and the fundamental laws that describe nature. Dunkley joined the faculty in 2016, deepening research collaborations she already had developed with Princeton colleagues. Dunkley also is a mentor to women in science. Dunkley, who as of this spring has two young children, said she feels it is part of her job to "figure out how to have a family life, be a mother, and be a professor."

Astrophysics inspires Princeton professor Jo Dunkley to ask questions about the universe and the fundamental laws that describe nature.

"I love that we can answer big questions about something so vast as the whole universe and actually use our scientific tools to answer them," she said.

A professor of physics and astrophysical sciences, Dunkley has always been fond of mathematics. She was first drawn to physics when she was an undergraduate at the University of Cambridge in England. Although she conducted some astrophysics research her final year, she came out of her university experience thinking that she did not want to be a scientist. She considered working for a nongovernmental organization or the civil service.

"I had a thought that being a scientist meant sitting on your own in a room, doing something that might not be so fascinating," she said. "I got that wrong."

A year away from science made her realize how much she missed it. Not only did she want to use math again, she had gained a newfound appreciation for research as a means to serve the community. She decided to return to research and earned her doctorate in physics from the University of Oxford in 2005.

"What we're trying to do is to find these deep answers to questions we've been asking for millennia," she said. "It's no good finding these things out unless we can explain to everyone else what it is we've learned. I see it as enriching people's lives to know more about the world we live in."

Dunkley joined Princeton's faculty in fall 2016, after serving on the faculty at Oxford. Before coming to Princeton, she already had collaborated with Princeton researchers on multiple projects. From 2006 to 2008, she worked with professors David Spergel and Lyman Page while a postdoctoral fellow on the Wilkinson Microwave Anisotropy Probe (WMAP) satellite, a NASA mission to make cosmology measurements and study the properties of the universe.

Spergel, the Charles A. Young Professor of Astronomy on the Class of 1897 Foundation and professor of astrophysical sciences, first encountered Dunkley when she was a promising graduate student at Oxford. He recruited her to Princeton, and was pleased to see her grow from a postdoctoral fellow to play a major leadership role in the WMAP project.

"At that stage, she was very quickly given significant responsibilities in the analysis and interpretation of the data, and made major contributions to the analysis that led to the development of what we now think of as the standard model of cosmology," Spergel said.

Soon after, Dunkley was asked to be part of the analysis team for the Planck satellite at the European Space Agency. "It was really a tribute to both Jo's scientific talents and ability to work in a big complex team that she was able to make contributions to both the leading NASA mission and then the leading European Space Agency mission," Spergel said.

At Princeton, Dunkley realized that she loved to work as part of a team, performing theoretical and data analysis work connected to experiments, and collaborating with people possessing a huge range of skills.

"As scientists, we can't just work by ourselves," she said.

Looking to the sky for answers

On campus, Dunkley works on the theoretical interpretation of new observations, primarily using the Atacama Cosmology Telescope situated at 16,000 feet above sea level in a desert mountain range in Chile. Using sophisticated computer programs, Dunkley's group develops theories to describe the universe or particular properties of the universe.

"We have these telescopes that scan the sky, and we turn the data into maps of the sky and extract statistics about them that we can then compare to our theories," she explained.

The process of comparing the theories to what we really see has a lot of steps to it, she noted, from filtering for the correct signal to thinking of ways to tackle statistical data analysis problems. To match the theoretical model of the universe with experimental data, Dunkley must search through billions of models until she finds one that best fits the data by fine-tuning variables like how old the universe is, how much it weighs and how fast it is growing.

"As we look out into space, we look back in time," she said.

As space expands, the wavelength of light also grows on its journey to us, she explained. By measuring this effect, scientists can see the universe evolving and changing.

"We get to pull out all sorts of information like what the universe is made of, and we see the beginnings of all the things that we now find around us in space that are more familiar, like stars and galaxies. We're seeing their birth, or their initial formation, right at this earliest time," Dunkley said.

Another area Dunkley investigates is dark matter, an invisible substance that clumps together due to gravity and does not emit light. Although there is at least five times more of this dark matter than normal matter, dark matter still remains one of the big mysteries in cosmology research, Dunkley said.

A technique to analyze dark matter is called gravitational lensing, a phenomena of light bending around a mass when shone from behind.

"We're now starting to reveal where the dark matter is by using these backlights," Dunkley said.

Although exactly what makes up dark matter is not yet known, most researchers think it includes some type of particle that has not yet been discovered. Whatever dark matter is, it has definitely influenced what the universe looks like today, she said.

"If you took it away, we would have ended up with a universe that looks quite different from the one we've got," she said. "There is probably dark matter going through us all the time. It's here," she said.

Dunkley is also interested in neutrinos, which are small, invisible particles. She would like to find out how much of dark matter is made of these neutrinos.

The mass of neutrinos has not yet been measured, but by looking at how distant light bends around dark matter, it will be possible to figure out their mass, and what fraction of this invisible dark matter is made up of these particles, Dunkley said. Answering these questions is part of a 10-year goal in a new project called the Simons Observatory, supported by the Simons Foundation, for which Dunkley is leading the science committee.

The new Simons Observatory telescopes will be located near the existing Atacama Cosmology Telescope in Chile. "It's beautiful. It's desert-like and it feels a bit like you're on Mars or something. It just doesn't look like anything else," Dunkley said. The telescopes will be used to look at the Cosmic Microwave Background in order to understand how the universe began, what it is made of and how it has evolved.

A role model and mentor

Dunkley is one of two tenured female professors in the Department of Physics, along with Suzanne Staggs, the Henry DeWolf Smyth Professor of Physics, who leads the Atacama Cosmology Telescope project.

"It is sometimes disheartening that there are so few of us [women] in this field, but I have always felt very positively supported in all the places I've worked," Dunkley said. Although most of her mentors and advisers throughout her career have been men, they were very encouraging, she said.

Nevertheless, Dunkley insists that more female role models are needed. "I think we're missing out on this huge number of great women who could be doing great physics who are just being lost out of the system," she said. "I think they are being put off quite early and are not continuing with science, and physics in particular. I think a lot of that is cultural, but I think that's something we can change."

One way to increase visibility is through the media, she said. "If someone invites you to go on TV or radio to talk about your work even for two minutes, you should do it. You get out there, you talk about your work, and you let people see you're real and that you're a real scientist."

Dunkley is writing an astronomy and cosmology book for the general public called "Our Universe," due out early next year. She hopes that young women will get excited about physics and space, and will be inspired.

"Jo is a real leader as a scientist," Spergel said. "She already mentors a number of outstanding young women, and I think she will play a big role in increasing the number of women in science," he said.

This past semester, Dunkley taught "General Physics II," a course geared toward engineering students. "It's fun for me to be teaching a big class of students who want to learn physics, but it's not the only thing they're doing and it's certainly not their only interest," she said.

In addition to her research and teaching responsibilities, Dunkley has two young children. "I feel like it's part of my job, to figure out how to have a family life, be a mother, and be a professor," she said.

"She's a fabulous scientist and a wonderful person, and we’re very lucky to have her at Princeton," said Page, the James S. McDonnell Distinguished University Professor in Physics. "It’s not common when you have — regardless of male or female — an absolutely top-flight scientist who's also just so fun to work with. [She] adds a spark, a positivity to the department, and to our group here."