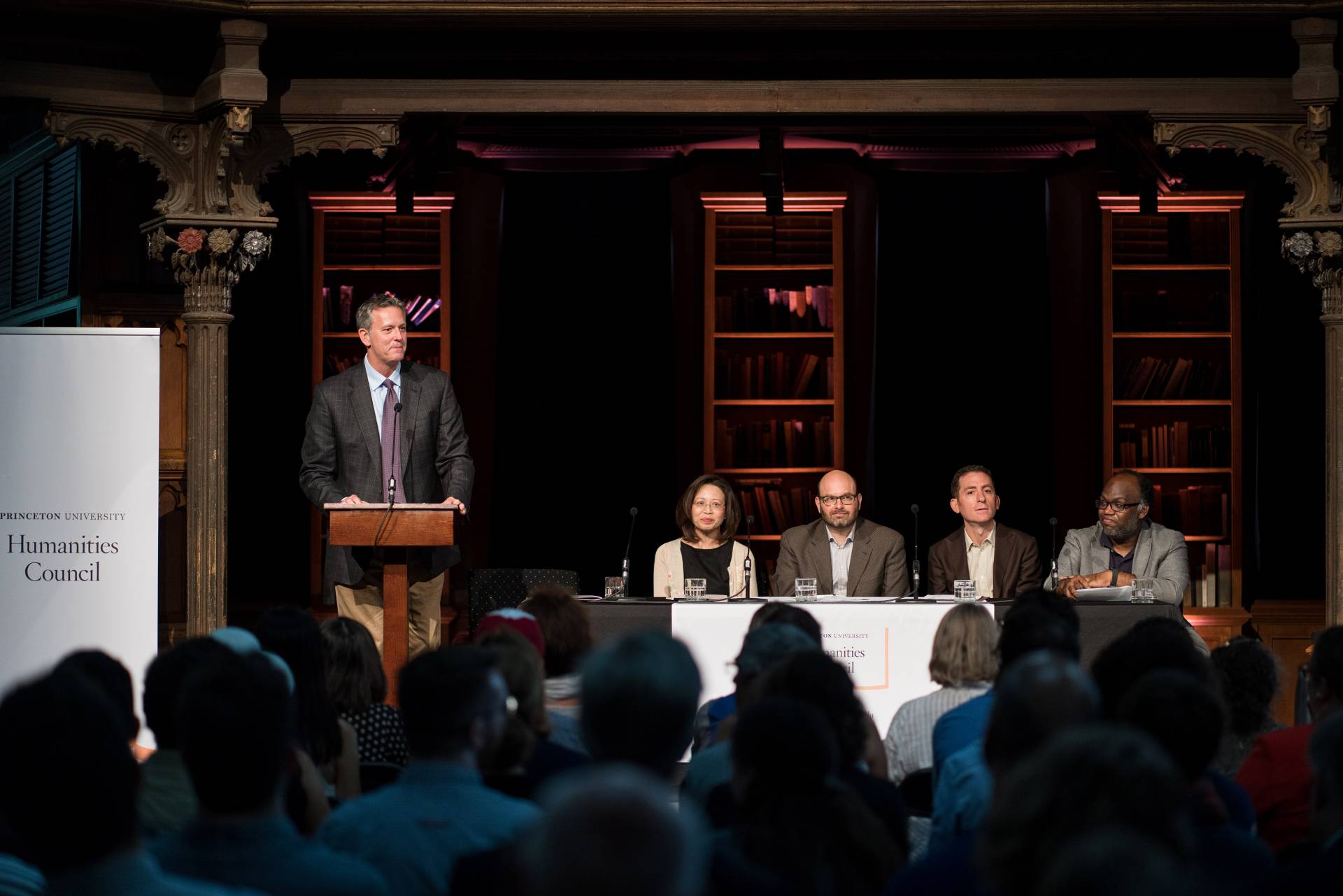 Afternoon light streamed through the windows of Chancellor Green Rotunda on Sept. 9, as faculty members, students and University staff celebrated the beginning of the fall semester with the 13th annual Humanities Colloquium, “Tradition, Critique & Imagination.”

Humanities Council Chair and Professor of Religion Eric Gregory welcomed a capacity audience to “an opportunity for a shared conversation about this thing we call humanities.” 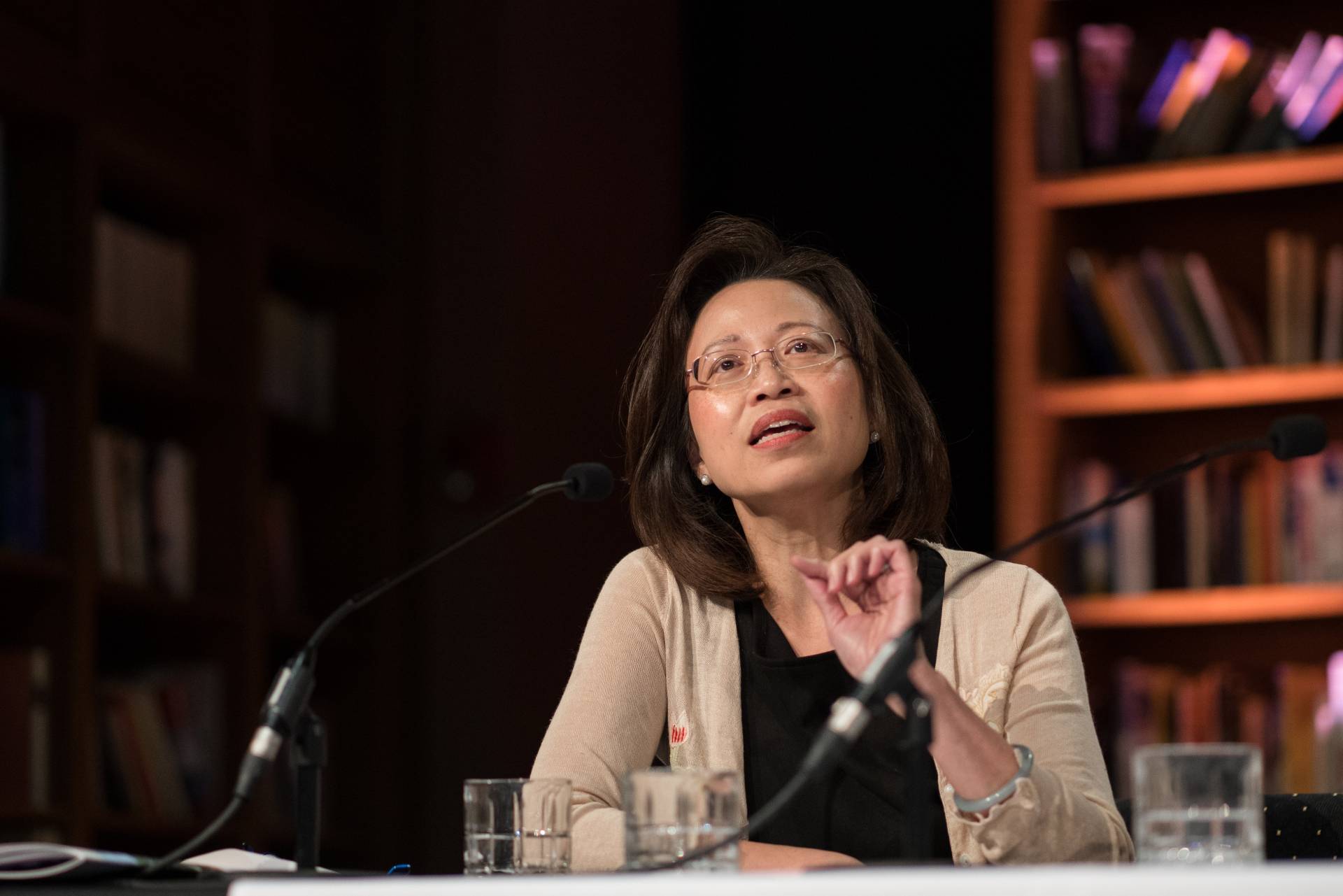 Following the panelists' remarks, Cheng — whose new book, "Ornamentalism," offers a new theory of Asiatic feminism — addresses a question during the audience Q&A.

Four Princeton professors related the colloquium theme to their research and scholarship, framing conversation among disciplines, presenters and audience.

Anne Cheng, professor of English and American studies, and director of the Program in American Studies, spoke on “The Critical Exhaustion of WOC.” Cheng said she intentionally used the acronym WOC in her title —instead of the full term “women of color” — to reflect how it has come to be empty of specific meaning. Cheng’s new book, “Ornamentalism,” offers a new theory of Asiatic feminism, bringing legal, cinematic and art history into a dynamic approach to problems of racial and sexual commodification and objectification.

While the last 50 years has seen “a groundbreaking swell of theoretical writings about the black woman,” Cheng said, “the broader category of women of color, and in particular the yellow woman, teeters dangerously close to extinction without ever having come to much critical life. We say ‘black women,’ ‘white women,’ ‘brown women,’ but not ‘yellow women.’”

Cheng said that even as “the label ‘the yellow woman’ fades from contemporary parlance, the Asiatic figure it denotes still stimulates passion and derision.” She detailed how the 2015 Metropolitan Museum of Art exhibit “China Through the Looking Glass” suggested “that opulence and sensuality are the signature components of Asiatic character, that Asia is always ancient,” and that “material consumption can promise cultural possession.”

“China equals ornament,” Cheng said, for Western figures from Plato to Oscar Wilde, William Morris, Le Corbusier, Ezra Pound and Jack Kerouac. “How do we take seriously the life of a subject who lives as an object?” 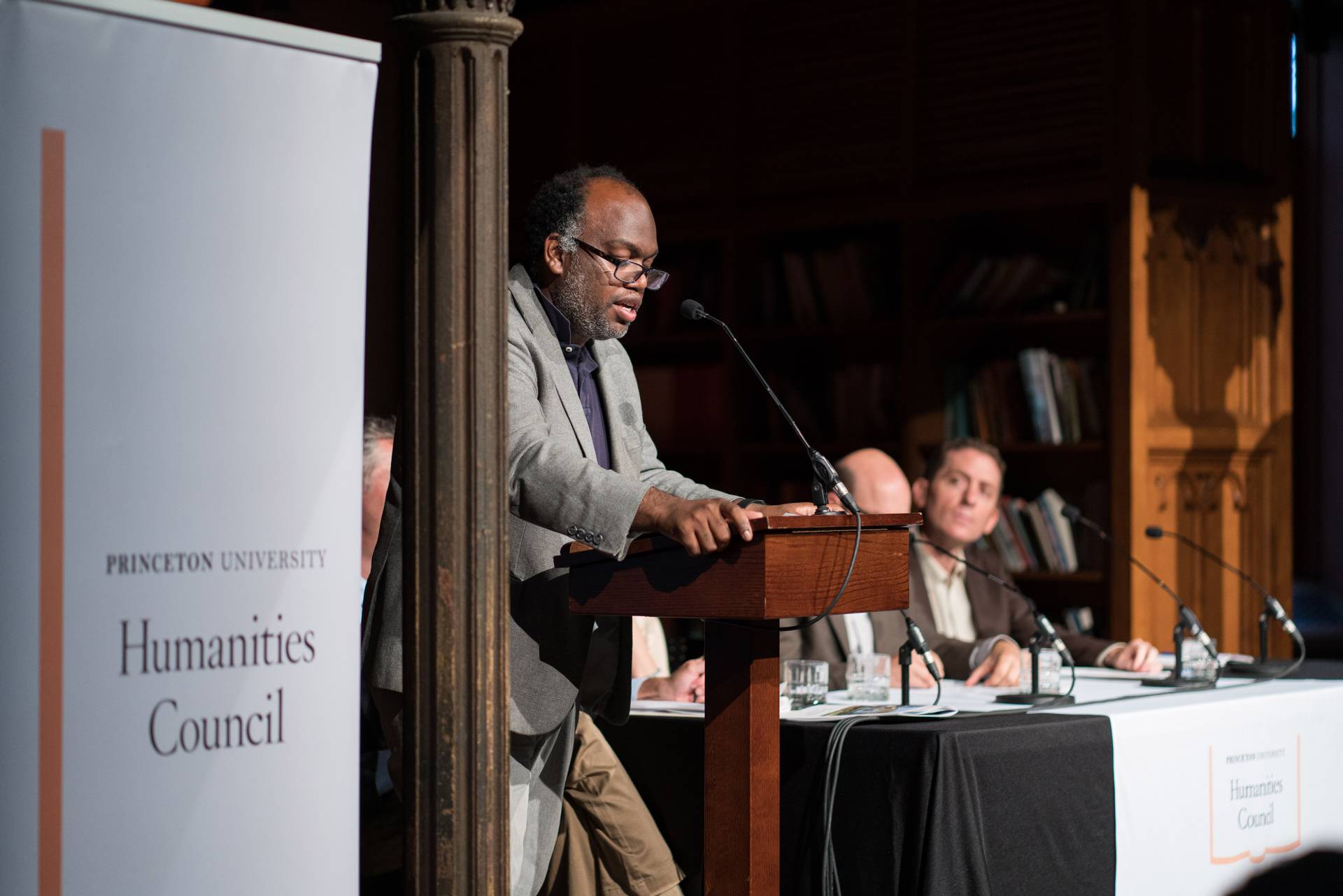 Padilla Peralta speaks about the field of classics' "meditation on its own history" and the ways in which classicists today are embracing diversity in the field, "making all things new."

Dan-el Padilla Peralta, associate professor of classics, explored how the field of classics’ “meditations on its own history” often narrowly focus on individual classicists’ institutional pedigrees. He said that no entries in the biographical dictionary of American classicists mention the structural force of racism in the antebellum and postbellum United States, and that the dictionary of British classicists “performs the same work of silencing for the United Kingdom.”

This, Padilla Peralta said, “should make classicists think twice.” He proposed instead consideration that “we are making all things new.”

Padilla Peralta’s research focuses on the Roman Republic and early Empire. He is the author of a memoir, “Undocumented: A Dominican Boy’s Odyssey from a Homeless Shelter to the Ivy League,” as well as numerous essays and articles.

Jonathan Gold, associate professor of religion, whose scholarship focuses on Indian and Tibetan Buddhist philosophy, and Daniel Heller-Roazen, the Arthur W. Marks '19 Professor of Comparative Literature, whose research interests include medieval studies, philosophy, aesthetics, and poetics and linguistics, also spoke, followed by a Q&A with the audience.

During the audience discussion, moderated by Gregory, the presenters shared their perspectives on the study of the humanities. Gold emphasized that “framing ideas in new ways creates new opportunities.” Cheng said that the things that the humanities are interested in “are ineffable. The question is, how do we come to know what we know, and what are the ways that we know it?”

Gregory noted that, within the various disciplines of the humanities, there is “a sense of a shared community, and a project we do together despite our differences, our critiques, our criticisms.”

Andras Kraft, a postdoctoral research associate in Hellenic studies, said that he attended the colloquium because, as a new arrival at Princeton, he was curious about how it would represent University life. “I felt myself quickly at home,” he said, amid the “sneak preview at the wide panorama of the humanities at Princeton.”

Kevin Zhang, a 2019 alumnus who majored in philosophy and will spend a few years at Oxford University before attending Yale Law School, returned to campus for the event. A highlight of the program, he said, was Gold’s description of “the need for us to make ‘repeated, careful refocusing’ in learning.”

For upcoming humanities events — including an Oct. 1 conversation between Naomi Klein, journalist and author of “On Fire: The (Burning) Case for a Green New Deal,” and Keeanga-Yamahtta Taylor, assistant professor of African American studies — visit the Humanities Council website. 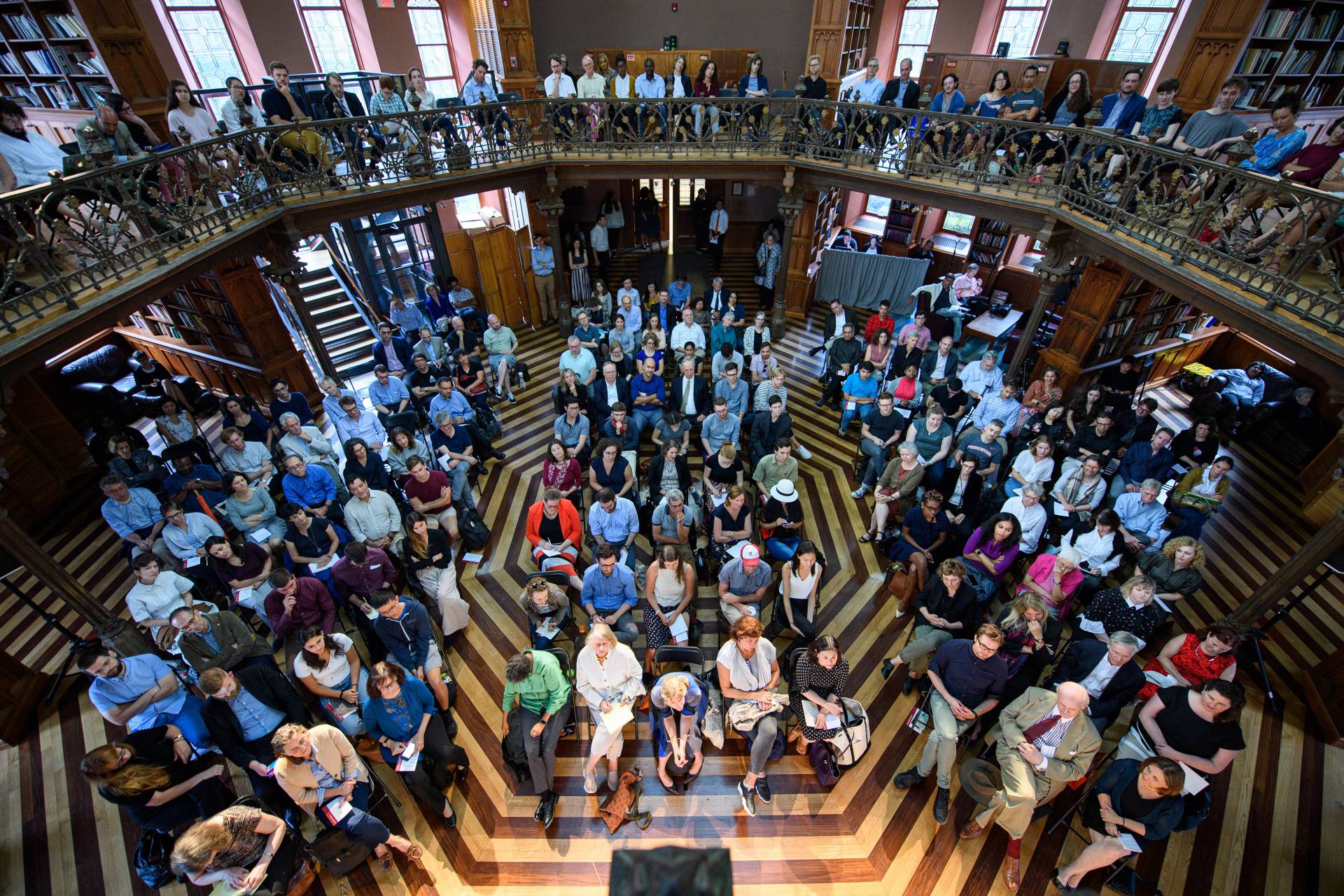 Learning to see fashion through a scholarly lens