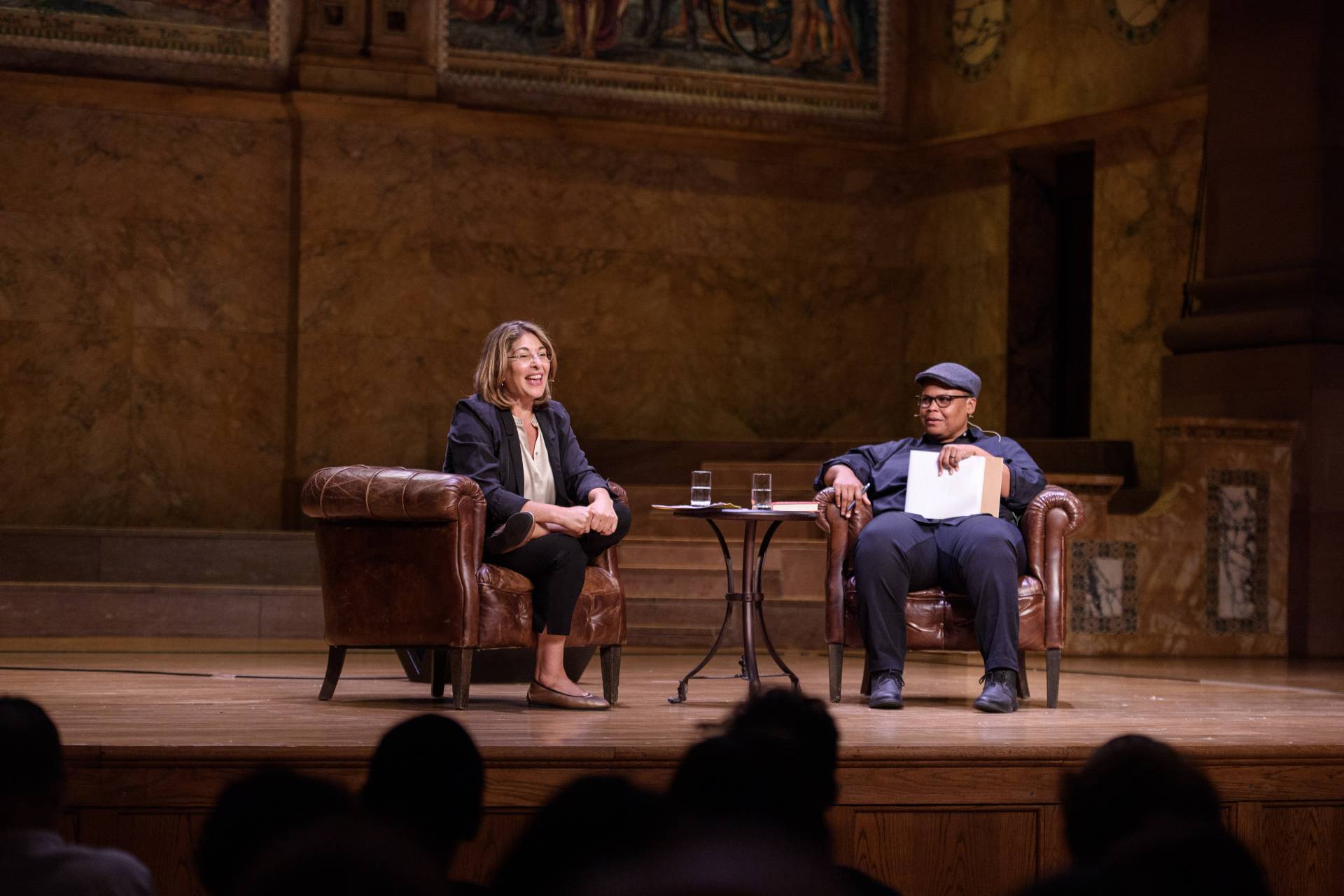 The climate crisis is on fire, said author Naomi Klein to a capacity crowd at Princeton on Tuesday, Oct. 1. And so is the social movement to tackle it, she said, highlighting global activism and proposals such as the Green New Deal.

The event in Richardson Auditorium centered on Klein’s latest book, “On Fire: The (Burning) Case for a Green New Deal,” a New York Times bestseller. Klein, the Gloria Steinem Endowed Chair in Media, Culture and Feminist Studies at Rutgers University, was joined on stage by Keeanga-Yamahtta Taylor, an assistant professor of African American studies at Princeton whose latest book, “Race for Profit: How Banks and the Real Estate Industry Undermined Black Ownership,” is longlisted for the National Book Awards 2019 for Nonfiction.

The event was a  Humanities Council Gauss Seminar in Criticism. 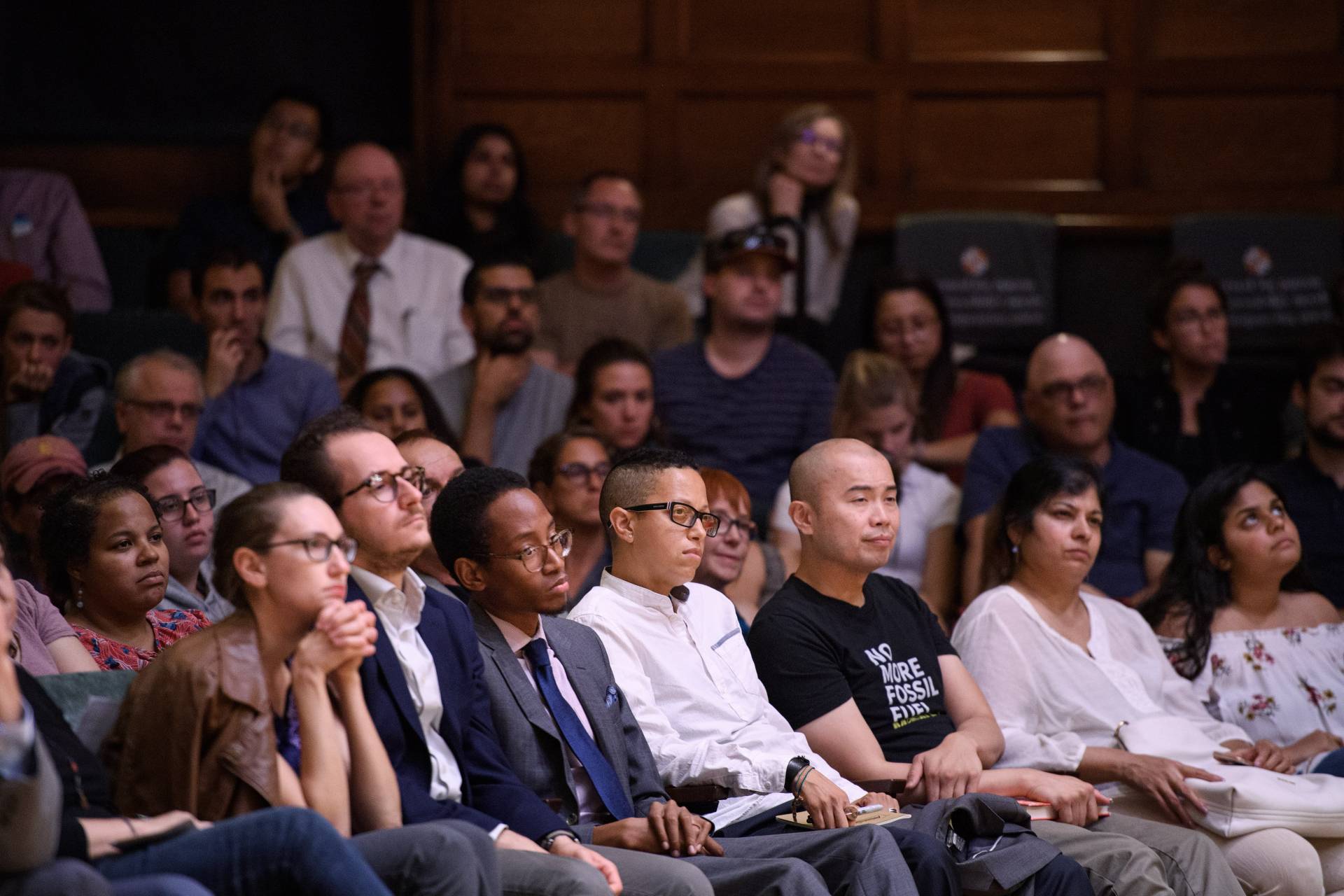 Like the title of Klein’s book, the night’s theme was fire. From the opening query of her 20-minute talk — “Are you feeling fiery?” — to its conclusion, an homage to 16-year-old Swedish climate activist Greta Thunberg — “Greta was the spark, but we are the wildfire” — fire was a prominent metaphor. While climate change has exacerbated the prevalence and intensity of worldwide wildfires, Klein argued that it can also be emblematic — a particularly potent symbol — of a social movement.

Klein began her talk by speaking with an urgency that is mirrored by many of the world’s most prominent climate scientists.

“What we do or don’t do in the next 10 years will determine the lives and fates of hundreds of millions of people,” she said.

Klein reiterated the dire consequences resulting from climate inaction encapsulated in the report on the Intergovernmental Panel on Climate Change that came out in 2018. This report, prepared by 91 authors from 40 countries, spells out the urgent need to reduce global emissions of greenhouse gases. It concludes with a goal of reducing global warming to below an increase of 1.5 °C. Klein, citing the report, said this would require a 45% reduction in global greenhouse gas emissions in a mere 12 years. To achieve this, however, the report points to unprecedented transformation in virtually every aspect of society.

“It’s a very, very, very short window we have to accomplish these unprecedented changes,” Klein emphasized. “And if every ounce of our energy was focused on the transformations in front of us, it would be hard enough to pull off — it would be a truly epic task.” 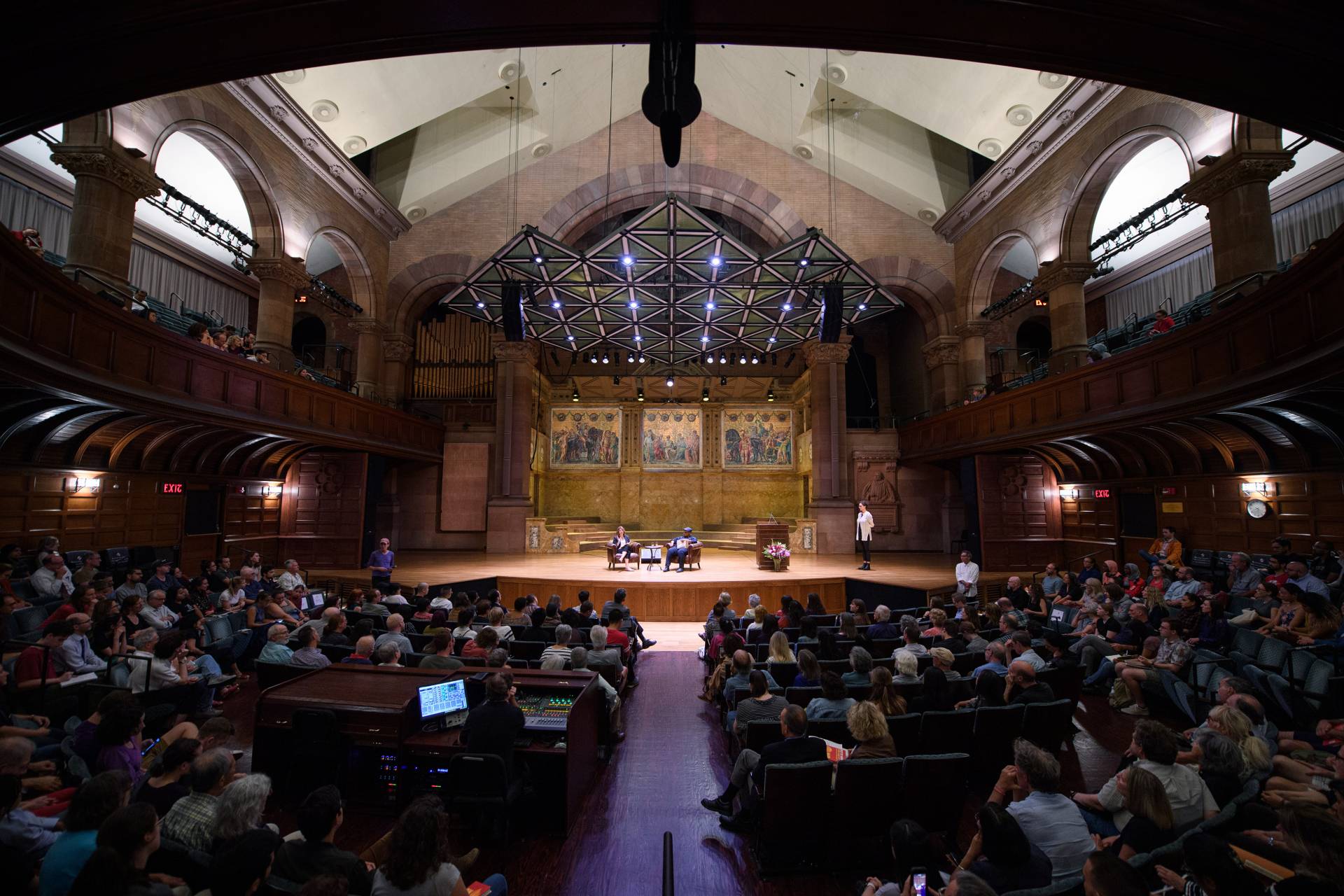 Klein described the need to tackle the climate crisis through an “intersectional” approach. “We live in a time of intersecting crises,” she said. “We can’t say we’re going to save the planet and then we’ll worry about racism and then we’ll worry about poverty. We have to do it all at once. We need to seize the moment to redress the most entrenched structural crises that date back to the founding of our nation.”

The changes she proposes take their inspiration from the IPCC report but also from the recently promoted Green New Deal, which has sparked considerable conversation and debate nationwide. This proposed legislation, sponsored by Rep. Alexandra Ocasio-Cortez and Sen. Ed Markey, aims to address climate change and many social problems, such as social and economic inequality. In the same vein as President Franklin D. Roosevelt’s 1930’s New Deal, it proposes ambitious goals that would have far-reaching effects on our society and economy.

Klein’s talk and subsequent question-and-answer format with Taylor was not focused solely on the much-talked-about task of reducing carbon emissions by adopting radical environmental policies. Klein has adopted an “intersectional” approach — that is, viewing the climate crisis from a collective, contextual perspective. She argues that much of the current climate problem is, deep down, a failure of political will spurred by anti-environmental leaders and neoliberal policies that have played havoc with the world’s resources and environment.

In this era of “rising seas and rising fascism,” Klein said, several of the world’s leaders — like Donald Trump, Australia’s Scott Morrison, India’s Narendra Modi and Brazil’s Jair Bolsonaro — are “predatory arsonists, who are pouring gasoline on the [world’s] flames.”

Indeed, she characterized the current world situation as two simultaneous fires, one unleashed by a warming climate and the other by the deliberate political and social policies of these world leaders.

Politicians like Trump and Bolsonaro, she contended, are fanning “fires of hate that are also raging out of control, that are also jumping from country to country. I don’t think it is a coincidence that these two fires, the planetary one and the political one, are raging at the same time. In fact, I think that they are feeding each other.”

Despite the pessimistic scenario outlined by Klein, she said she has not given in to despair.

“There is a third fire,” she said, striking a hopeful tone, “and it is raging, and it is our fire. It is the fire of the global climate justice movement.”

She called attention to the massive global climate strikes of the last few weeks, which resulted in over 7 million people taking to the streets to protest government inaction and failure on climate change. She called this situation unprecedented in the history of the world.

“There is something shifting,” she noted, placing hope and optimism in the younger generation, many of whom are actively participating in the climate debate. For example, she pointed to the Sunrise Movement — a coalition of young people gathered together to demand action on climate change — as a positive step in raising awareness of the climate crisis. 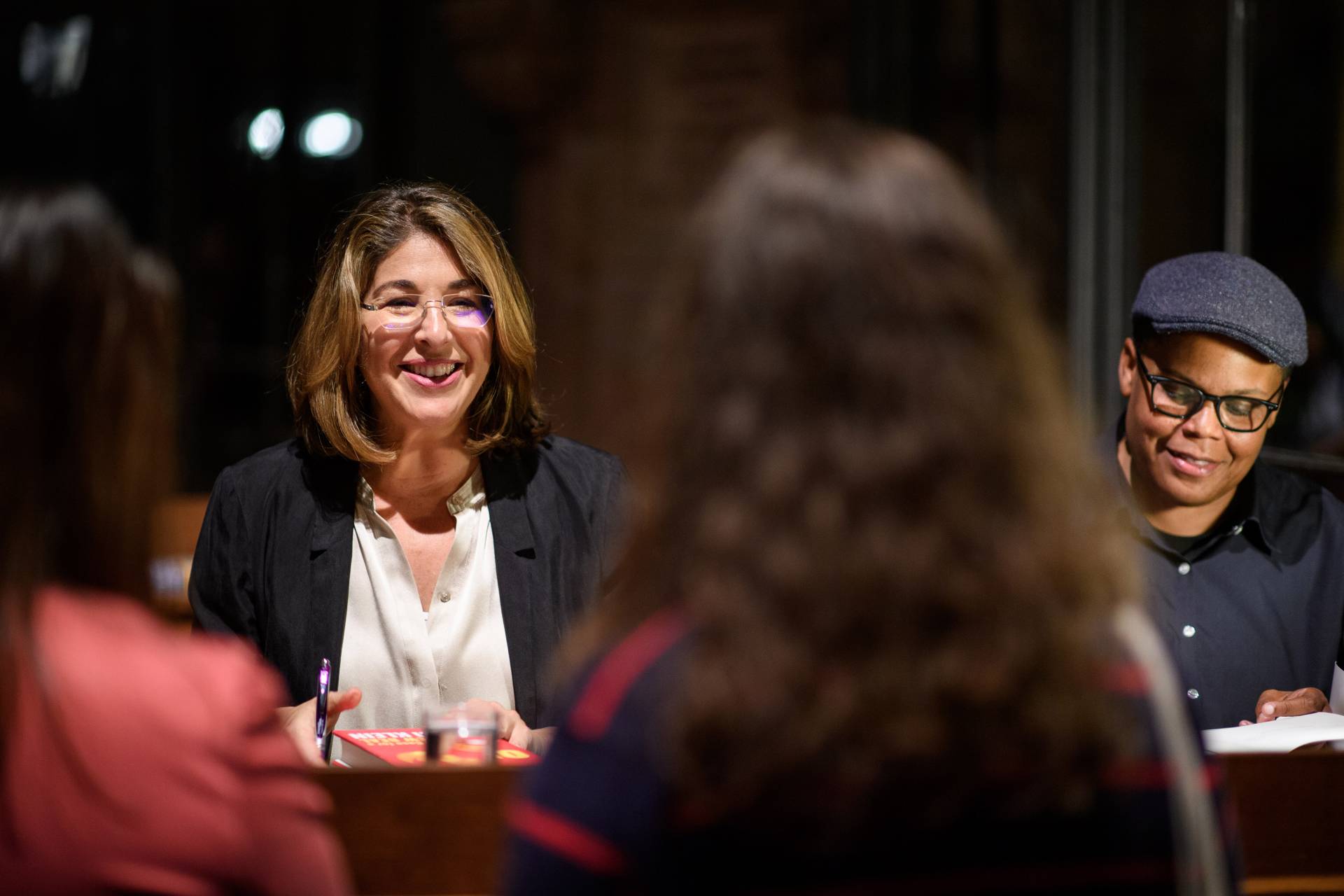 After the event, Klein signed her latest book, “On Fire: The (Burning) Case for a Green New Deal,” and Taylor signed her 2019 book, “Race for Profit: How Banks and the Real Estate Industry Undermined Black Ownership.”

Klein concluded her talk by reemphasizing that confronting the climate crisis involves an intersectional approach, as outlined by the Green New Deal.

Returning to the fire theme one final time, Klein challenged the audience. “It is truth time,” she said. “It is fire time. I don’t think we should be afraid of our fire. I think we should ask ourselves if we aren’t on fire, why aren’t we? Fire clears away the debris and makes room for new regrowth.”